Did you hear about Teo Kim Len (pic above), the 107 year old lady who got her MyKad recently? Thanks to the help of a local political party, she is officially the oldest Malaysian citizen to get her MyKad, since she arrived from China in 1955.

While this is all good news to hear, but what we noticed in the news report was that she had 5 FAILED ATTEMPTS before she finally got her MyKad.

It may sound a little weird that someone had to apply for a MyKad that many times before they could get it (with the help of a politician, no less). So we decided to find a few more stories of Malaysians who were denied their MyKads for various (and sometimes weird) reasons…

1. The child who was ‘too fair’ to be her mother’s daughter When 12 year old Mahalachime and her mother, V Kamila, went to the NRD in Perak in 2013 to apply for her MyKad, they were told to do a DNA test first to confirm that they were biologically related.

According to Buntung state assemblyman A. Sivasubramaniam, who brought up their case to the press, the officer refused to process Mahalachime’s application without proof that she was her 60 year old mother’s daughter on the basis that Mahalachime looked too fair. Mahalachime and her mother, Kamila. Image from says.com

Not only was her MyKad application denied, but the NRD even kept Malachime’s birth certificate without returning it. Distraught, Mahalachime reportedly couldn’t sleep for days and was teased by her friends for failing to get her MyKad. She even attempted suicide by swallowing some bleach, but was saved at the Raja Permaisuri Bainun Hospital. While the NRD claimed to have never demanded that a DNA test be done to prove Mahalachime’s parentage, but its state director insisted that it had the rights to make inquiries if they find the application suspect, as it was according to their Standard Operating Procedure.

Everything got sorted out and Mahalachime’s MyKad application went through, and she was a happy girl when she got her MyKad in November 2013. Mahalachime with her MyKad. Image from TheStar.

2. The lady who got denied, despite vouched for by Deputy Chief Ministers 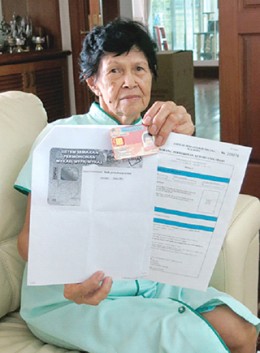 Here’s a story of one who wasn’t so lucky. Rita Joan Thomson is a terminally ill and 80-year-old Sabahan, born of mixed Bajau descent from Bongawan, Papar. Since she was born shortly before World War II, she did not have a Birth Certificate and was given a Permanent Resident status instead of a citizen.

Married to a senior civil servant, when the NRD advised her to apply for her citizenship through her husband, he was already on life support and unfortunately died shortly after.

After submitting a complaint to the Human Rights Commission of Malaysia in 2012, the NRD was willing to accept her application for citizenship. Among the supporters for her application was a lawyer, and not one, but TWO Deputy Chief Ministers of Sabah, Tan Sri Pairin Kitingan , and former Deputy Chief Minister Datuk Ariah Tengku Ahmad, among others. 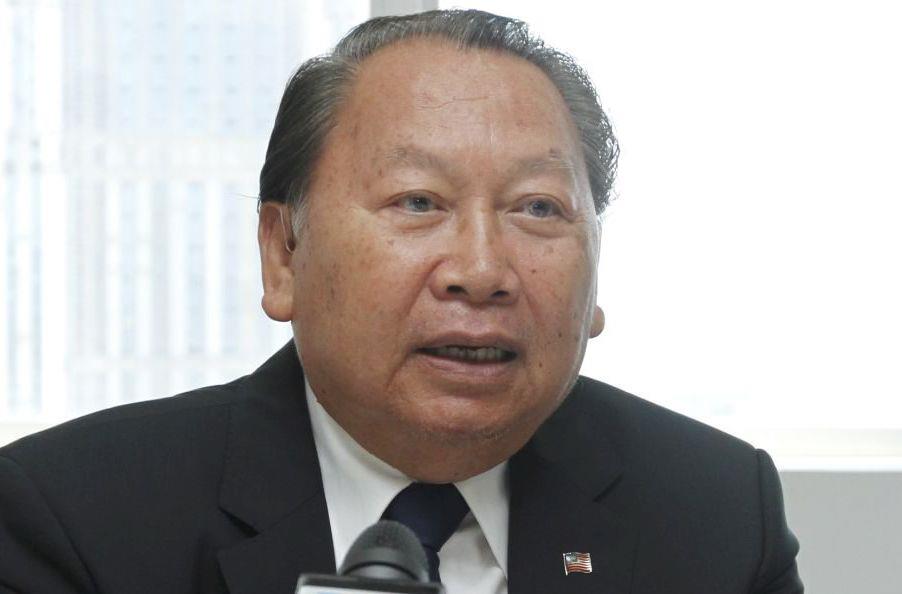 Her descent was also confirmed by the state director of the State Native Affairs Office that Rita is indeed a bumiputera, due to her late mother being of Bajau descent.

While the NRD in Kota Kinabalu had acknowledged that they had received her application in March 2013 and Rita was due for an interview and Bahasa Melayu test, Putrajaya never returned with further instructions to proceed.

Rita finally went to bring up her story to the local press and is still awaiting a reply. Rita’s story is similar to another Sabahan who was able to get various authorities to vouch that she was born in Sabah, but have yet to be given a MyKad for citizens. Lai Yun Lan @ Amilik, another Sabahan with documented claims as a Sabahan but still not given a citizen’s MyKad. Image from DailyExpress.

3. The teen who got denied because his parents’ marriage were untraceable Navin with his temporary receipt to collect his MyKad. Image from The Star

In fact, a letter from the Home Ministry stated that his application got rejected because his father’s marriage wasn’t registered under local laws. After 2 attempts to get a MyKad in 2010 and 2011, then 16 year old Navin was still without a MyKad. Aside from having to bear the taunts from schoolmates for being a ‘foreigner’, he was later asked by the school he was attending to stop coming altogether, because of his non-Malaysian status. Navin’s lawyer representing his case at the High Court. Image from The Malay Mail Online.

Moorthy eventually had to file a court suit in 2013 against the NRD, the Home Ministry and the government to have his son’s citizenship reinstated. In November 2014, the High Court ruled that the NRD’s removal of Navin’s citizenship and rejection of his MyKad was done unjustly and was too harsh, while also violating his protections under the United Nations’ Convention on the Rights of the Child.

NAH, BACA:
Eh, if the Government wants to build an LRT on your house, who decides on compensation?

The court rejected the NRD’s argument that because Moorthy’s marriage with his Filipino wife was unregistered, and who has since become untraceable, it should not make Navin ineligible to be a citizen. Furthermore, for issuing Navin a passport, the NRD had already implicitly recognised Navin as a citizen.

Although the NRD tried to appeal the decision, the Court of Appeal dismissed the case. In the end, Navin was given his MyKad in April 2016, after almost 6 years of waiting.

4. The heroes who fought for our country… but our country thinks they’re Indonesians Basar Arun, Kadamus Liling, Basar Paru, Florant Arun and Anderias Sha are from the Lun Bawang ethnic group, who live in the Bakelalan mountains of Sarawak which borders with Indonesia.

During the Confrontation between the newly formed Malaysia and Indonesia in the 1960s, they served as Border Scouts with the British Gurkhas to help the defend our country in Long Semadoh and Bakelalan. Stephen Then of The Star reports that without them, “a big chunk of Sarawak could have ended up in the hands of a foreign country and Malaysia’s borders will not be what it is today.”

Although their service was recognised by the Ex-Malaysian Army Association, they have repeatedly failed to get a MyKad. In fact, they’ve even received certificates of appreciation for their efforts. Now in their 70s and 80s, all they have to show for their heroic deeds are red and green identity cards, as the NRD couldn’t decide if they were born on the Malaysian or Indonesia side of the border. These guys still don’t have a Malaysian citizenship.

And they’re not just the only ones – according to Basar, many other Sarawakians like them still do not have a MyKad.

“We are already very old. We want to be recognised as Malaysians and be given citizenship before we die. ” – Basar in an interview with The Star

According to Sarawak Progressive Democratic Party deputy president Datuk Nelson Balang Rining who represented them to plea for their citizenship, not only have they been unable to apply for any form of social welfare, their non-citizenship status has passed down to their children. While the SPDP tries to get more information on these stateless heroes, it is reported that most of them now live in “faraway and inferior settlements”.

Getting a MyKad isn’t as easy as you’d think We may not think much about getting our MyKads when we were 12, but there are actually some pretty stringent requirements that needs to be met by the NRD. It is a common misconception that we only need a Birth Certificate to certify that we are Malaysians (if you are born after 31 August 1957), but there are actually more criteria to meet, in order to be eligible for citizenship.

Under the rules that governs our rights for citizenship which can be found under Article 14, 15A, 15(1), 15(2) 16 and 19 of the Federal Constitution, you will notice that there are more documents required from the applicant in order to prove that they are Malaysians. One often overlooked document is the Marriage Certificate of the parents, one of whom must be a Malaysian citizen (with supporting documents to prove as such).

“To determine the status of the child, we will also look at the marriage status of the parents. In cases where the marriage is not legally registered and the mother is a non-citizen, the child would not qualify for citizenship, even if the father is a Malaysian.” – NRD Public Relations officer Jainisah Mohd Noor, quoted in The Borneo Post

This creates a potential legal trap, where a child who is born from an unregistered marriage or a mother who is not a Malaysian, would not be entitled for citizenship and at most be given only Permanent Resident status. In other words, stateless.

There are more stateless people in Malaysia than you’d think An Al-Jazeera report quoted there to be an estimated of 150,000 stateless children in Malaysia (and CILISOS highlighted one of their reports on stateless children in Sabah, but they were stateless because their parents are non-Malaysians), and most of them come from remote communities in the interior, where marriages and births are often not registered.

“They are often poor and illiterate. There’s only so much time and effort they can spend on this, so they give up and the statelessness carries on to the next generation.” – Eric Paulsen of Lawyers of Liberty, quoted in Al-Jazeera

A Whitepaper reports an estimated 12,000 and 300,000 of stateless Malaysian Indians, who worked in the rubber plantations, and were denied citizenship because they lack any form of proper documentation to identify them as being born in Malaysia, or to Malaysian parents who may have came from India generations ago.

Things don’t get easier for children who are adopted by legally Malaysian parents. Even though there are procedures to grant citizenship to adopted children of Malaysians, but to the NRD it should be the biological parents who should apply for their child’s citizenship.

“Adoption only provides legal care rights of a child and does not carry along with it automatic citizenship rights…Ideally, it is the responsibility of the birth mother and father to obtain citizenship by dealing with their country’s representative to avoid their child from being stateless in Malaysia.” – NRD statement quoted in Al-Jazeera

As told in this account of a Malaysian mother who adopted a child born by a Burmese mother (a story similar to other adopting parents), that process can be frustrating and leading to dead-ends. Pastor Henry Martinus and his wife Serena Wong, with their adopted children. Click on image for full story. Image from The Malay Mail Online.

Not having a MyKad sucks, because you are denied to enter into public schools and hospitals, you cannot obtain the simple things such as having a driving license or opening a bank account, and worst of all, you can’t get jobs, a foreigner with a work permit would have a better chance of getting. Without a MyKad, you also cannot get a passport, so you are essentially trapped in a country you call home, but you are not legally recognised as its citizen.