Most of us would have come to associate 1MDB with it’s RM42 billion worth of debt. And though they have said that they have been able to pay off some loans and short-term debts, it’s hard to forget that the number is now hugely associated with the company.

Recently however, another big-billion-amount debt has hit our newspapers. The thing is, this time it isn’t a company that is being associated with the debt, but a person by the name of Tan Sri Syed Mokhtar Al-Bukhary. Some of you may have already heard of him. He’s one of Malaysia’s richest people, coming in at number 9 with a net worth of USD 1.4 billion (RM5.72 billion)! But all that worth may not be worth very much because recently there has been talk about his debts. And seriously, these debts give 1MDB a run for their money (or lack of it) because….

Yes, yes, it’s about 8 billion short of 1MDB’s debt, but it’s still in the berpuluh billions la. The Straits Times of Singapore recently ran a story about the gomen giving Proton a “soft loan“(a loan with no interest or below market rate interest) of RM1.5 billion, which added to his already huge debt amount.

Why is Proton connected to Syed Mokhtar Al-Bukhary? Well, Proton is owned by another company called DRB-Hicom, and about 56% of DRB-Hicom is owned by Syed Mokhtar. That however, is only a small part of his really, really huge business empire, or as the business people will call it, conglomerate. But how he managed to get to where he has often been referred to as an inspirational story. Syed Mokhtar is actually of Yemeni descent. This website talks about how his dad actually traveled around Asia before settling down in Kedah in the 1940’s.

Syed Mokhtar was the 3rd of 7 children and received his education in Kedah up to form 5. His family wasn’t well to do and thus entered the working world at a very young age. He started off as a beef supplier, before moving on to transportation, and finally starting his own beras company with 2 Chinese flers. The company eventually expanded to many other industries like commodities, transport, and manufacturing.

The story goes on, but in short, his company expanded, and it looks like hasn’t stopped expanding since with his story being a classic example of a rags to riches story. BUT that is also how his company’s debt has accumulated over the years, and RM 34 billion is no joke because….

The last time a company with that much debt went bankrupt, our stock market crashed

Anyone remember this logo? Image from logos-vector.com

Renong was a pretty big deal back then. New York Times said that it was the country’s largest infrastructure company during the Mahathir era. 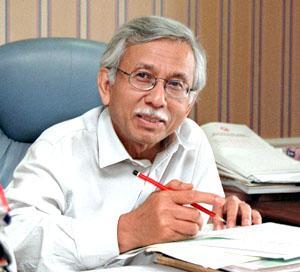 “When Mahathir Mohamad became premier in 1981, Tun Daim — a lawyer and trusted friend of the prime minister — began planning an overhaul and expansion of UMNO’s then small and weak businesses.” – Columnist Raphael Pura, on WSJ

Among these companies was Renong, the biggest industrial conglomerate of the time. During the 90’s, Renong received a lot of gomen contracts to build stuff, and its boss, Halim Saad, was also the protégé (anak murid) of Tun Daim Zainuddin (who is also famous for replacing Anwar Ibrahim as Finance Minister after he was sacked in 1999).

However, when the Asian Financial Crisis hit Malaysia, Renong was unable to pay off the debts it had accumulated, and went bankrupt. Aside from costing investors millions of Ringgit, Tony Pua claimed that the gomen gave Renong RM10 billion to bail them out. Other news portals don’t specifically mention the amount but they do mention bailouts (like here and here). Their bankruptcy has also been said to have caused our stock market to crash, something that was echoed by Tun Mahathir himself.

So why is the gomen giving Syed Mokhtar more money when he’s already in so much debt?

“In the pursuit of his vision of creating Bumiputera entrepreneurs in control of huge conglomerates, Mr. Mahathir’s government generously bestowed in a non-transparent manner numerous privatized concessions on companies in the Renong Group, as well as other favored businessmen, like Tajudin (Ramli).” -Terence Gomez, a professor at University Malaya on WSJ

Syed Mokhtar could be one of them because Straits Times has referred to him as “the only surviving poster boy of the many ethnic Malay businessmen groomed by the government from the Mahathir era.” (Although the Malay bit may not be so accurate.) He even got Mahathir’s approval when he wanted to buy Proton! Image from Bloomberg.

And because of this, there are those who refer to Syed Mokhtar as an UMNO crony. (It’s a popular word but for those who don’t know, cronyism is the practice of abusing one’s position of power to help a friend or colleague. If a person in power helps a family member, it’s called nepotism instead.)

UMNO has long been associated with cronyism. A quick Google search on “UMNO cronyism” will show you tons of results. One of them is an article which paints Syed Mokthar as this.

While cronyism is a common word among Malaysians, no one actually has any proof of it. But people have brought up some of Syed Mokhtar’s businesses which raise questions on how he managed to get them in the first place. For example:

All of the beras business in Malaysia is owned by this company called Bernas. In 2014, it was reported that Syed Mokhtar acquired about 91% of Bernas’ shares. In the business world, when you have that many shares, you can buy the remaining shares and own the whole company (compulsory acquisition).

And when this happened, Anwar Ibrahim said that this means people involved in the rice industry like the farmers and distributors don’t have the opportunity to own shares in bernas. This report also adds that Minister of Agriculture, Datuk Seri Ismail Sabri Yaakob himself admitted that Syed Mokhtar currently has a monopoly over the beras industry.

Aside from Proton, another company he bought called Penang Port from the Finance Ministry. When he bought the company in 2014, he also took on the company’s RM1.2 billion debt. And with his debt already an issue at the time, Tony Pua once again raised the question of how was he allowed to purchase the company. Got so much debt can buy port, but other people with credit card debt can’t get bank loan. Image from penangport.com,my

And these two examples are aside from the Proton case we mentioned earlier. But does this mean he only benefits from UMNO and nothing more? Well, some commentors on MalaysiaKini (like here and here) have claimed that UMNO may be benefiting from his businesses too but once again, no proof la.

However, if the earlier mention of how UMNO started privatising businesses to finance UMNO is true, that may also be true for Syed Mokhtar and his conglomerate.

Cronyism may be a problem in UMNO, but what if they aren’t the only ones?

While Syed Mokhtar’s conglomerate may be one of the more popular alleged examples of cronyism in UMNO, it may not be an UMNO specific problem. There are claims that the opposition does it too! Remember when Tan Sri Khalid Ibrahim was removed as Menteri Besar of Selangor? Well initially, PKR wanted to replace him with Dr. Wan Azizah (before circumstances prevented them from doing so), which actually did raise some questions on how they selected their next Menteri Besar.

“In my mind, she would make a good MB, I have no problem with her personally.

But to put her while she is still the wife of Anwar Ibrahim smacks of cronyism, nepotism, corruption, everything that Pakatan is supposed to be fighting against.”  – Wan Saiful Wan Jan, CEO of IDEAS, as quoted by The Malay Mail Online

Tun Daim Zainuddin, the former Finance Minister we mentioned earlier, also brought up other examples of alleged cronyism in the opposition and said the opposition should take a good look in the mirror before saying that UMNO and BN is filled with the practice.

So while Syed Mokhtar’s empire MAY be because of cronyism, the problem here seems to be cronyism in our society, not Syed Mokhtar himself. Sounds familiar, no? Image from thenewsdoctors.com