In early 2016, some hullabaloo was caused in the U.S. when famous American rapper B.o.B confessed on Twitter that he believed that the Earth was flat. Then recently, a video of a famous flat Earth believer (a.k.a flat Earther) confronting a NASA employee in Starbucks went viral. At one point, he was even asked to leave the premise after he accused the NASA guy of hating Americans. 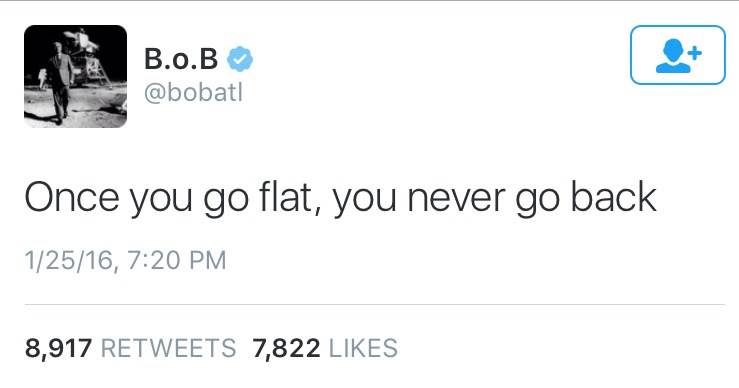 Unless you’s a tire, my African American friend. Image from The Odysseyonline.com

A quick check on Google Trends reveals that people around the world have been doubting the shape of the Earth in recent years. At first, we thought that the whole flat earth fascination was only a thing in the U.S…. until we found out that a couple of local Facebook pages where Malaysians go to discuss and ponder flat Earth things.

While the sphere Earth is how most people imagine Earth,

Earth according to scientists. Gif from giphy.com Basically, Earth is seen as a giant pizza, with the North Pole (Santa Claus land according to Jolyn) in the center, and the South Pole (Antarctica) is a huge wall surrounding the edge of the Earth. All this is then encased in a giant glass dome, which humans cannot break through.

Giant ice walls? Invincible domes? Seems like something cooked up by someone that had a bit too much to drink. And yet, there are still people that are convinced. So we decided to take a closer look at the flat earth arguments, because what if … we were the one’s that were wrong instead???

This is the core of the flat earth argument. Everywhere you look, does it look like it’s curved in any way? The sky, the sea, even the rice fields of Perlis all seem flat no matter how you try to look at it.

In 1881, Samuel Birley Rowbotham published a 430 page book containing all his works that proves the Earth is flat, and you can read all of it here. Among the many experiments, the most frequently cited is the Bedford Level Experiment. No need to put on your science hats because we’ll explain it very simply: 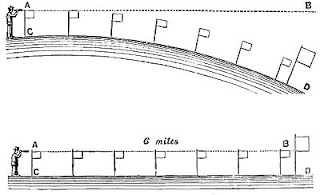 Imagine each flag as a different boat position. Image from ifers.123.st.

But another scientist named Alfred Russel Wallace did a similar experiment, but his result was the complete opposite. One thing Mr.Rowbotham might not have considered at the time was atmospheric refraction, which can do all sorts of things to what you see in the distance depending on the air composition, how far away you are, from what height you are observing (vantage point), and so on. Because of this, the Bedford Level Experiments might be inconsistent.

If you really want to see the Earth’s curves with your own eyes, you would need certain conditions. But a simple thing you can do is to bring a pair of binoculars to the seaside and watch the boats sail in and out of the horizon. Or if you have about an hour to spare, you can watch this boat slowly disappear as it sails into the horizon.

2. “We never see the Earth moving, only the Sun and the Moon.”

Day and night on flat earth. Gif from imgur.com

But then, what about the 4 seasons? How is winter and summer explained in the flat Earth theory? Well, besides spinning round and round, the sun and moon also orbits inwards and outwards of the center of flat Earth (North Pole). So when the sun is near the North, the nearby region becomes hot and it experiences Summer. If it’s spinning away from the North, then it becomes Winter.

But, the theory does not explain the fact that some parts of the world don’t experience day and night like most of the other parts do. At the North and South Poles themselves, they can experience several months of NON-STOP daylight during summer, and whole day of darkness for a few months during winter.

If you think about it according this flat Earth orbit theory, if somewhere on the flat Earth were to have 24 hours of daylight, that would mean that the Sun had to stay put for that long… wouldn’t the other half of the world be in complete darkness??? 3. “Space travel is an international conspiracy and satellites don’t exist”

It’s not just NASA and satellites that flat Earthers don’t believe in. Remember the part about the unbreakable dome? It’s the entire idea of space exploration that they don’t believe in. Neil Armstrong’s moon landing, Sputnik, the International Space Station (ISS), the expedition to Mars are all gomen schemes to embezzle money and dominate the world.

But U.S. only spends less than 1% of their budget on NASA each year, and President Trump of the U.S. has recently even reduced the budget allocated to NASA. Not to mention, many of today’s space programs, including the ISS, is a joint effort by several countries. So this is either a weak reason, or someone had better phone the DoJ, because this is probably one of the greatest cover ups in history.

About satellites, how would flat Earthers explain satellite TV and GPS? Which many of them probably use as well. Plain and simple: Satellite TVs use antennas,”satellite” dish, towers, and the help of the atmosphere because it is known that the ionosphere can reflect microwaves. As for GPS, they say that we are still relying on the LORAN technology used in the 1940s, and was already shut down in many countries years ago.

If you really want proof of satellites, we found out that you can actually photograph the ISS as it passes the sky, but you’ll need a very good camera, a telescope, and knowledge of the general position of the space station. We have you covered for the last thing (which you can find out here) but the other 2 would cost quite some money. You can even track other satellites here, and even on these apps your phones. The Earth spins constantly at about 1600km per hour, according to sphere Earth theory, so why can’t we feel it at all? Likewise, if we were on an aeroplane flying at 900km per hour, how can we just peacefully sleep and eat nasi lemak on the plane?

Well, it’s the same when we’re in an elevator or a moving car actually. Basically,when we are in something that’s moving at a constant speed, we tend not to feel the effect. But lets say when the car we’re in suddenly breaks or speeds up, we would feel the effects immediately. The whole explanation is a little too complex to be explained here, you can read it here.

A famous experiment that demonstrates the sphere Earth’s spin is Foucault’s Pendulum. Many museums in various countries have one, and depending on where you are on sphere Earth, the direction of the pendulum’s swing will differ. Another cool way of proving the rotation is photographing “star trails”. Basically, a series of photographs are taken over a period of time using long exposure setting, and the motion of the stars can be seen very well after the photographs are processed: It seems easy to debunk flat earth theories, so why do people still believe it?

Although the academia of flat Earth is outdated, incomplete, and stagnant, many people around the world still choose to believe in it. We suspect it might be a combination of several reasons. Psychological studies done by VU University Amsterdam and University of Kent found that people that tend to believe in conspiracies tend to:

There could be religious reasons at play too, as there were quotes in the Quran that are famously used to support the concept of flat Earth. However, many of the early astronomers that studied sphere Earth were Muslim scientists too. According to the Ijma (consensus of the scholars), they have concluded that the Earth is round, and some Muslim scholars have concluded the quotes supporting a flat Earth were not conclusive.

There also the fact that we tend to believe things that are exposed to us repeatedly, even if it is wrong. This is something called the “Illusion of truth“, and the continuous bombardment of simple statements like “Earth is flat because it feels flat” might seem true to those that don’t understand complicated scientific journals and theories. Speaking as a person of science, though the evidence is obviously stacked against the flat Earth theory, it should not be discredited without due respect or ridiculed simply because it is different or even wrong. It is in the spirit of science to doubt, and to keep people’s minds open to possibilities, and that is how great things were discovered in the first place. As the great Carl Sagan once said:

“Science is more than a body of knowledge. It is a way of thinking; a way of skeptically interrogating the universe with a fine understanding of human fallibility.” – Carl Sagan