So…recently, the cartoon show Upin and Ipin made the news for a weird reason – the Chairman of Indonesia’s Broadcasting Commission called it positive propaganda. Of course, the word ‘propaganda’ was meant in a good way, as it promoted Malaysia as a country that’s cultured, polite, and religious.

But that’s not the most surprising thing Indonesia has said about Upin and Ipin because apparently, they’re also very active in discussing fan theories and conspiracies about the show. If you do a quick Google search, discussions about the show are dominated by our neighbour. This is just the first page btw.

We were intrigued, and after diving deep into it, we compiled 4 of the ones we found most interesting that will make you scratch your head sampai botak.

Short summary of the characters so you don’t get lost

If you’re already familiar with the show, skip this and go straight to the next header. If not, read on.

Despite Upin & Ipin being femes for pretty much all age ranges in Indonesia, it’s primarily marketed to children here – so there’s a chance you’re not too familiar with it. So to help you boomers out there, here’s a basic overview of the show. The show revolves around Upin and Ipin, a pair of orphan twins who are raised by their sister, Kak Ros, and their grandmother, Opah. They stay in Kampung Durian Runtuh, which is watched over by Tok Dalang, the ketua kampung as well as a wayang kulit champion. There are other side characters in the show, but since the theories revolve around the ones mentioned, we’ll let you google the rest yourself.

Just remember that this listicle is just a collection of fan theories and creepypastas, not the official story, so take it as such. With that in mind, let’s start with the first and longest one, which is…

“The Spirit of Upin” is a creepypasta that gave a dark origin for the inspiration behind Les Copaques studio’s animation.

According to this one, the story started back in 1756 and that’s not the weirdest part. A couple named Jusof and Rosmah were still childless after trying for a few months and sought the help of a bomoh. After a ritual using a keris, Rosmah became fertile and had 3 children: Rose, the eldest daughter; and 5 years later the twin boys Upin dan Ipin.

Upin was apparently a psychotic child who also loved stabbing people when he felt like it. When their parents died after being shot by a robber, Ipin cried all the time which annoyed Upin, who then stabbed him with a kitchen knife. He then made it a double homicide by stabbing Rose in the eye then ran away. Unedited image from Know Your Meme.

Tok Dalang, who helped to raise them after their parent’s death, searched for Ipin and found him at his parent’s grave. After writing the name of Ipin and Ros on the parent’s headstone and revealing his smashed face and bloody eyes, he then vanished into thin air.

Years later, an animation studio thought this was a great story and made a children’s cartoon about it. When they released it, kids who watched it died the day after, their heads exploded and their eyes missing. The studio pulled the episode but it was too late as millions of children died from it.

This story might seem really nonsensical, but judging by the YouTube comments saying they got goosebumps from hearing it, it’s probably worth listening to in the right mood. This means in the middle of the night with the lights off for that extra creepy factor.

Since the show started in 2007, Upin and Ipin have only grown older by one year – from 4 years old to 5 during the second season, and they have stayed the same age since then. But if we calculate properly lah kan, if they were 4 years old in 2007, in 2021 they should be 18 years old.

Because of this mystery, some people have started to come up with some of their theories on their rahsia awet muda. In an Indonesian podcast, a guest mentioned a theory that’s been floating around – that the whole show is just an imagination of Kak Ros.

In this theory, Kak Ros was in a car with her parents and she was holding her favourite dolls – Upin and Ipin. They got into a car accident that killed both of the parents, while Kak Ros was the only survivor but went into a coma. While in that comatose state, she then imagined that Upin & Ipin were her younger twin brothers, and made a whole story about them.

This is apparently an old theory as we’ve found info of it floating around since early 2010. But then, this type of theory isn’t new – some people have had similar theories about shows with forever young characters such as Shin Chan. Or you can just make them older and have a child like Boruto. Image from comikbook.com

We asked some of the show’s fans for a simpler explanation of why they don’t get old, and the answer is: it’s probably due to marketing. Instead of making the characters age, they kept them young so they can have a constant influx of new fans.

3. Upin & Ipin are the result of incest

Oh lord help whoever made this theory, because they need all the gods in their life. This theory is so controversial that both Malaysians AND Indonesians were pissed off about it, which is probably why it became widespread.

As this theory goes, Upin and Ipin aren’t orphans because their mother is actually their sister, Kak Ros. This suspicion started because despite being 12 years old, her character is way too tall to be a child. 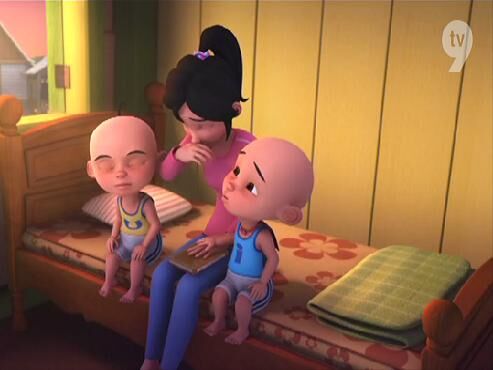 To make the theory more messed up, it’s speculated that the actual father is Tok Dalang. Tok Dalang was actually married to Opah before this and slept with Kak Ros who got pregnant with the twins. To hide their shame, the couple decided to divorce and kept it a secret from the twins. This would imply that Tok Dalang had children with his granddaughter, which would make Upin and Ipin his sons AND great-grandchildrens.

Overall, the whole 35 seconds of this video united both country’s netizens in hatred, so much so that the video creator had to make an apology video. And now that we’ve seen all the messed up theories, here’s a more familiar one for you Malaysians, which is that…

4. The show is an agenda Yahudi

This copy-pasted conspiracy theory has been going around since 2010 and was shared widely in forums and through chainmails. It started with the warning: “Fwd: Fwd: Fwd: Don’t say Upin & Ipin, say Uffin & Ariffin!!!” In case you need a visual aid.

The show is apparently the hidden agenda Yahudi to weaken the Muslim’s faith in god, after they failed to do so through Pokemon, Doraemon, Digimon and Mamula Moon. The creator also gave a bonus revelation of kejahatan Yahudi about the iPhone 4G: the I stands for Israel, while the 4G stands for God, Gold, Glory and Girl.

After the wild theories previously this one seems relatively tame, though now we are keen on hiring the Israeli who created these smash-hit cartoons. Please send your resume to [email protected] Must be a team player and able to work remotely. My fan theory is that there’s crack in this thing. Image from Flokq.

We Malaysians and Indonesians tend to disagree on a few things, especially when it comes to the origins of batik or food. Yet we finally have the unlikeliest thing to agree about – no one messes with Upin dan Ipin.

Interestingly, from all these wild fan theories and conspiracies, the one that was most spread in Malaysia was the one about agenda Yahudi. Even though Indonesia did come up with some messed up theories, they did focus more on the relationships of the characters instead of looking for evil Jewish intent behind the show. Weird? Yes. Creative? Also yes.

For years, Malaysians have been obsessed with Indonesia’s entertainment industry – for example, travel tours based on the movie Ada Apa Dengan Cinta is popular with Malaysian tourists, and it’s not a new movie. And every Malaysian of a certain age will know the lyrics to Sephia from Sheila on 7 by heart. For once, we finally have an artistic creation that our neighbours are crazy enough to not only be fans, but to add their own interpretation to.