Oi storekeepers, you all think you’re so hebat right raising prices to the roof. You claim it’s not cheap to run a business ‘these days’, the same expired excuse you used on customers 10 years ago. You all say ‘need to support my wife and 5 kids lah’, as if the rest of us have no families of our own to feed? All your hands dig deep into the common rakyatfolk’s pockets then we have to pay the price for your price-hiking whim. LITERALLY!

Since you all so hero like that, come we help you even more. Here are 9 deng smart excuses you can use on customers with a Sure-or-Not-o-meter to see whether jadi onot.

Hey we did say these excuses would be ridiculous. But no, Adam Adli’s dad is a retired civil servant, not a cotton candy seller. Image from Ikhlasul Amal on flickr.com

And sedition charges could happen to the best of us. For so much as liking a particular Facebook page or creating one. You’d better have some extra cash handy for when something like this happens because a sedition sentence could go 3 ways

2 out of these 3 possible outcomes involve a large sum of money. Yes RM5,000 is quite a large sum to average Malaysians considering our average monthly income is RM5,900. But what about the one third of Malaysian households who are still only earning below RM3,000 a month? What if a person from this income group was slapped with a sedition charge? They can’t survive on microbes in the air. Of course they would have to increase prices (if they were business owners).

Then there’s the matter of bail. Sometimes you could post like a RM5,000 bail then get rearrested and pronounced guilty for reals.

It gets worse right? Now wanna use UPSR resit as an excuse. I work so hard running my stall, now my son gotta resit paper. Time for comfort keropok. Image from sobri on flickr.com

Milk this excuse to the max businesspeople coz this may be your last chance. The Education Ministry plans not to re-visit such a disaster again with the help of CCTV.

7. “Haiz. Have to send my son overseas. Man cannot be nurse okay?” 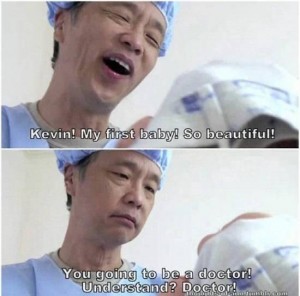 What the heck are we talking about? Well remember Ng Yi Ling, the student who scored straights A’s in both her SPM and STPM exams but was denied by 9 public universities to study medicine and dentistry? She was offered nursing instead. Watch this.

Don’t get us wrong, nursing is an honourable profession, but we’re talking about a young woman’s dreams here. Like if we wanted chocolate ice cream and someone gave us red bean ice cream instead. That’s not what I ordered! Any parent who wants the best for their kid would consider pulling out their savings like this dad.

But Yi Ling is only one out of MANY students who go through this rejection. A lot of parents are opting to send their kids overseas for further education. So how like that? Customers must pay for my kids education la. 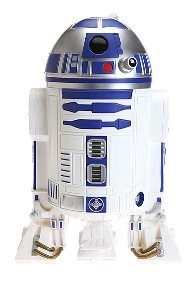 BR1M or 1Malaysia People’s Aid is a cash handout project devised by PM Najib to help low income Malaysians. Things will be different in 2015 / BR1M 4.0.

“Owing to higher cost of living and implementation of GST, BR1M for 2015 is likely to increase by RM300 for households with monthly income below RM4,000 and individuals earning less than RM2,000 per month,” Patricia Oh, AmResearch, The Star

Previously it was RM500 for households earning below RM3,000. This increased budget is expected to cost RM7.5 billion compared to RM4.6 billion this year.

But it’s notchet time for version 4.0 so to survive, business owners can syok sendiri hike up prices first until the cash aid comes in next year. 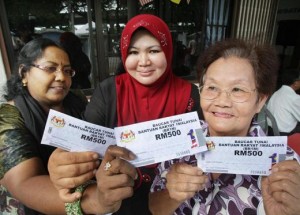 Such happy. Image from freemalaysiatoday.com

Ebola? Isn’t it contained in west Africa though? We wished. Thomas Eric Duncan from the US  is the first person in the current outbreak to have caught the virus outside that zone. Sadly he passed away on Oct 8.

Even though the virus hasn’t affected Malaysia, business owners can totally pull this fast one on customers claiming that they now need to spend more on cleaning agents to keep their premises safe.

Besides, there are plenty other diseases that business people can convince customers to raise prices for. Something closer to home would be leptospirosis. Eh you’re right, thanks to that idiot rat at AEON – showing up at the wrong place at the wrong time! And summore that jerk CILISOS writer wrote that article about restaurant hygiene, light a fire under my bum. That jerk! Now I terpaksa spend more on maintaining hygiene. Aiya whatever. Increase price.

True that. A random search on Propwall showed just how expensive shop rentals can be today. For a shop in Kepong, KL, the cheapest rental fees on the first page was RM3,000, in Johor Baru it was RM1,900, in Georgetown, Penang it was RM3,500 and in Sabah it was RM2,300. Why do rental prices keep going up? It’s because property prices are skyrocketing too. There’s a co-relation between property price and rental. “The days of being able to buy a property without putting any money down and in 2 years selling it for a 30% profit – those days are absolutely over,” claims Malaysian Institute of Estate Agents president Siva Shanker. So expensive, I lost my appetite. Image from Brian Yap on flickr.com

Plus Malaysia doesn’t have rent control law – it was abolished in 2000. Like that business owners have a field day justifying their increased prices. Even pasar malam sellers. Yes, even pasar stall also need to pay rent! Rising rent can affect any type of business at all: F&B, retail, medical, pharmaceutical, etc.

NAH, BACA:
BR1M vs gomen subsidies: which is actually better for Malaysians? We take a look.

3. “This one imported siham, sure expensive la” 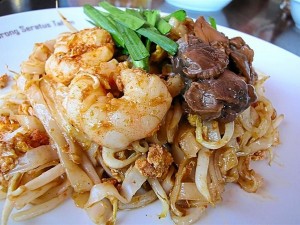 Char Kuey Teow without cockles might as well be a Christmas tree without baubles. Image from thestar.com.my

Nooooooo! This is bad news. Our yummy goodness – gone because of pollution.

Kahar Buntal, 62, explained that when he and his fellow fishermen hauled up his harvest of blood cockles they were mostly empty shells. It happened for 6 months straight.

“In past seasons, almost 90% of the harvest was healthy cockles. But that isn’t the case anymore these days. The dwindling population and slow growth rate are signs of deteriorating water quality in the cockles’ breeding environment.” – Kahar Buntal, The Star

What worries the fishermen is that supply can no longer keep up with demand. And we all know where that road takes us. Cockles feed a market demand that reflects Malaysians’ voracious appetite for them, however they are cooked. That’s why restaurants (and not just the ones selling CKT) are going to raise prices. 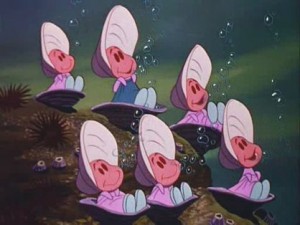 High in protein and low on fat and carbs. By the way, there wasn’t a good end for these baby sihams in Alice in Wonderland. Image from gamesradar.com

How like that? We.Must.Have.Cockles. Faster la, people getting hangry! 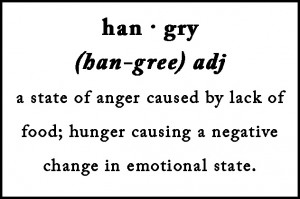 
We made you this pretty chart to show the ups and down (notice the singular) of petrol prices since 1990. Confession: Data was from Astro Awani, colours are CILISOS original. Which businesses do you think are going to hike up their prices because of this? The answer is practically every business in Malaysia. Why? Because petrol drives logistics. Chatime, MPH, Lenovo, Sephora, Giant… they all rely on vans and lorries to deliver their goods, therefore if delivery charges go up – you do the math while we nap. Zzzzzzz

So you cry, you pray, you beg – whyyyyy government naikkan petrol price? Dunno leh could it probably be because of our big fat federal debt of RM561 billion? *winks winks* Seriously if we had a Biggest Loser contest for debt……… The Domestic Trade, Consumer Affairs and Cooperatives Ministry stated that the hike was in line with its subsidy rationalisation plan. Economists called it the right move to cool the debt and supposedly it will save the government at least RM1.1 billion, according to The Malaysian Insider.

OK fine then we turn to hybrid or electric cars la, save fuel. Errr, sorry to bring you bad news but excise duty exemption on these cars will soon end. HUH? Then how??? Increase price lor.

Way back in 2009, the Goods and Services Tax was dared mention in Dewan Rakyat. Because of heavy criticism, it was put off. But now it’s happening for real, starting Apr 1, 2015. A GST of 6% will officially replace the Sales & Services Tax. Wait replacing another tax? What’s the big deal then if it’s a replacement? But there are differences… We’ll show you in the example of this red Kilometrico pen.

GST is charged at every stage of the supply chain of a product. You see all these stages of making a Kilometrico pen? GST will apply for EVERY SINGLE ONE.

Starting at the raw material stage a little dash of GST is added, then at factory assembly, a pinch of GST, at warehouse, a dollop of GST, at the stationery shop, a spoonful of GST and FINALLY, you pay all that GST added up. Read more differences here.

So why do prices go up all the time?

Today’s ECON lesson – INFLATION. Otherwise known as the endlessly stupid cycle of humans trying to one-up each other. 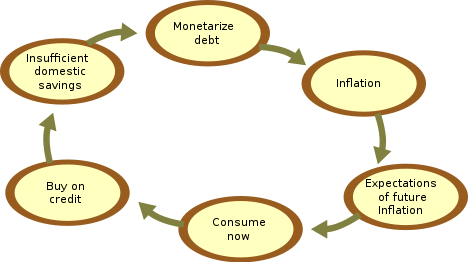 A lot of factors contribute to inflation in Malaysia. F&B contributes the highest percentage to inflation at 30.3%, followed by housing, water, electricity and other fuels at 22.6%, and thirdly transportation at 14.9%. Although kangkung price is still down we are pleased to report.

The government had launched its ‘zero inflation’ campaign in ’95. Has it been achieved since then? Not based on annual average inflation rates (source: The World Bank), we haven’t. And what about our average monthly household income? In 1995, the average monthly household income was RM2,020 while in 2013 it was RM5,000. Doing the math, the average has increased by 40.4%. But again, what about the one-third of Malaysian households that are still earning below RM3,000?

The United Nations defines poverty as income below 50% of a country’s national average monthly income. OECD on the other hand sets the bar higher at 60%. Taking UN’s 50% as a benchmark, Malaysia’s poverty line should be RM2,500 NOT RM860, because our official average monthly income is RM5,000. 50% of 5,000 = 2,500 But if we set it to this benchmark OMG then a 40% chunk of our population is considered below poverty level, reported The Malaysian Insider.

Economist Azrul Azwar Ahmad Tajuddin told The Malaysian Insider that since household income is the average of all households – rich and poor – the wealth of the top earners is helping to lift the average so that it looks like the nation is doing OK. Gee! So then The Star reported that cost of living has indeed been escalating over the last 10 years. Domestic consumer prices have gone up by 2.5% per annum (over these 10 years), while asset prices have gone up by 6.1% per annum.

Sometimes business owners don’t even tell you why they’ve raised prices and the customer is nary the wiser (wasn’t this cup of teh tarik RM1.20 yesterday?). It’s their business after all and it’s at their discretion to up-down prices. Running a business is hard and all these people want to do is make a living. All we can do is decide whether or not we’re buying. On the bright side, we can now ‘boast’ that Malaysia is a high cost of living country.