[This article was originally written by our Soscili fam in BM. You can read it here.]

If you’re a big Datuk Lee Chong Wei fan, you must have heard about the release of his much anticipated biographical movie recently. The reception Lee Chong Wei: Rise Of The Legend, turned out to be real smashing, earning RM2.1 million in just 4 days.

Giving it a THREE thumbs up. Image from Malay Mail Online.

Perhaps encouraged by the positive response of local sport movies (let’s not forget Ola Bola), there’s talk about a movie for Malaysia’s Olympic cyclist/ keirin rider: Azizulhasni Awang. Azizulhasni is the first Malaysian Track Cyclist to win a medal not only in the UCI Tack Cycling World Championships, but also in the 2016 Olympic Games!

He was at one time the world champion in keirin, and just last month, he set a new record for Asia in the individual sprint event at the 2018 Asian Cycling Championship (ACC). He’s nicknamed “The Pocket Rocketman“, due to his achievements despite his small stature.

Only because the other athletes are tall. Image from Malay Mail Online

But as our friends at SOSCILI discovered, there used to be more than a couple of old guards in the Malaysian track cycling scene, breaking records and setting the boundaries from way back when:

1. Daud Ibrahim wouldn’t speak to anyone for a week to focus on competitions

Daud Ibrahim on the furthest left. Image from olympic.org.my

More than 40 years ago, the late Daud Ibrahim won a gold medal in the Asian Games’ 1600 meter track cycling event. A year later, he swept up all the gold medals in every cycling event in the 1971 SEA games predecessor (called SEAP games), and managed to repeat this achievement later in the 1977 SEA games. He was also the second Malaysian cyclist to be given the Malaysia’s National Sportsman of the Year title, and even qualified for the Olympic Games in Munich.

You would wonder if 1970s Malaysia had the facilities and resources to produce such outstanding athletes, but perhaps a large part of his success came from his own commitment. Daud Ibrahim had strict, and perhaps slightly extreme habits to keep his mind focused before competitions. Aside from being an obedient trainee, he would sleep at around 10pm every night, and even avoid talking for up to a week.

After his retirement, he decided to coach trainees for the 1989 KL SEA games. His diciples managed to replicate his success by winning all four cycling gold medals. He was also given the honours to light the torch in the 2001 SEA games opening ceremony. Unfortunately, Daud Ibrahim passed away suddenly on 11th November 2010, when he was involved in a fatal accident with a trailer on the North South Highway.

2. Ng Joo Ngan cycles 150km a day, and then goes to work in a car workshop

While Daud Ibrahim was snatching up the gold medal in the 1600m event, Datuk Ng Joo Ngan went for the gold in the road race event. That’s basically like Tour de France or Tour de Langkawi, a race on the open roads that could be a couple thousand kilometers (lasting a few weeks), or just a few hundred (lasting one day). Daud Ibrahim was the second cyclist awarded the National Sportsman title, because the first was actually Ng Joo Ngan.

Datuk Ng Joo Ngan’s origin story is as cliche as it is adorable. When he was just a boy in his neighbourhood, he was challenged to a race by his neighbour/ elder brothers’ friend, which he accepted but lost ultimately. Fueled by his defeat, he trained harder, and managed to beat his rival in the next race. Perhaps to make sure that his neighbour would never forget that day, Ng Joo Ngan continued to train.

Every morning, he would wake up at 5 in the morning and cycle for about 150km in the Klang Valley area. The only reason he doesn’t keep going is probably because of his job at the car workshop, (which earns him money to fund his passion) because he would continue cycling right after work. At the age of 17 he entered all sorts of races and by the time he was 18, he was already a cyclist representing Malaysia.

Meanwhile, half of CILISOS don’t even take the stairs. Image from the malaysia project.blogspot.my

When he wasn’t qualified for the Munich Olympics, Datuk Ng decided to retire, and moved into coaching at the age of 24. Until today, he still seems to be actively coaching cyclists for Malaysia. On top of owning his own bicycle shop in Ampang, he received his Datukship in 2010 on Federal Territory Day.

NAH, BACA:
These 7 companies own almost half of all Malaysian stocks. Let's see how this happened.

3. Rosman Alwi had to endure humiliation at the hands of his coach, who was also his father

Before Azizulhasni Awang set a new record, Malaysia had another sprint cycling champion in the Asian Championships. That person is Rosman Alwi, but before earning the “Sprint King” title, he was previously also jeered as “The Turtle Head” because of his difficult journey at the beginning of his career.

Just like the rest of the national cycling team, Rosman trained under Alwi Ahmad. But unlike the rest of his batch mates, Alwi Ahmad was also his father. The training was especially tough for Rosman, because he had to endured humiliations like smacks to the face, ear pulling and even insults from his father in front of his friends. It was only after an incident where he fainted during training that his father went a little easy on him. Even then, things didn’t start turning to his favour.

In the 1981 Manila SEA games, Rosman failed a urine test, and was suspended for 2 years. Still, he continued training, and when he returned after his suspension, he soared to stardom. He won a bronze medal in the 1983 Asian Cycling Championship, 2 gold medals in the SEA games, and set a new record while he was at it. He even qualified for the 1984 and 1988 Olympic games! But after lackluster results in the 2001 KL SEA games, he eventually decided to retire at the age of 40. 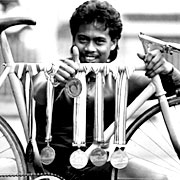 M. Kumaresan is a legend in Malaysian SEA games cycling. Between 1985 to 1997, he won a total of 21 medals (9 gold and 12 others), in events including track and open road cycling. He also qualified twice for the Olympic Games, and he became the first Malaysian to qualify for a cycling final in the 1992 Barcelona Olympics. 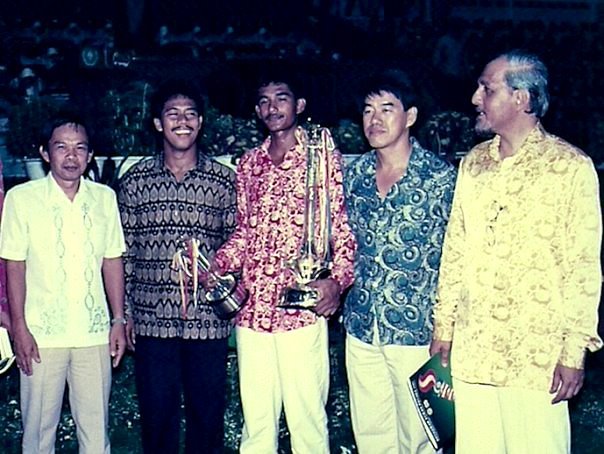 M. Kumaresan in the middle (with red shirt). Image from rizalhashim.blogspot.my

After the 1998 Commonwealth Games in KL, he decided to retire at what he considered to be the height of his career.

“I was 31 and realised that for cyclists, once you are in your 30s, you are over the hill. I wanted to retire when I was at the top and not when people start asking you to retire,” – M. Kumaresan told The Star

After a few unsuccessful attempts at starting some businesses, he ended up venturing into politics, serving the MIC as their Youth Secretary for seven years. More recently, he was appointed deputy Chef De Mission (person in charge of the national sports team) in the most recent SEA games, and is trying to help his son represent the country in cycling some day.

5. Josiah Ng pretty much got disowned because he wanted to pursue cycling

Josiah Ng qualified for 3 Olympic Games from 2004 to 2012, more than everyone else on this list. Besides also qualifying for a finals in the Olympics, he’s also won a gold medal at the 2010 Commonwealth Games, and was the first non-Australian to win the 72nd Melbourne Cup on Wheels. He was also Malaysia’s Olympian AND Sportsman of the Year.

His family actually moved to the U.S. when he was still young, but pursuing cycling was difficult even there. For instance, he had to buy his own bicycle, by selling 250 chocolate chip cookies with the help of his grandmother. But, his parents proved to be his biggest obstacle yet. Even though he had encouraging results in cycling, his parents objected so strongly to his pursue of cycling, that they kicked him out of the house when he refused to abandon cycling.

“On my 18th birthday, my father asked me nicely to pack my bags. I remember that day like it was yesterday. He shook my hand and said ‘good luck, son’.”  – Josiah Ng, quoted from The Star Josiah in the aftermath of a training injury. What more could life throw at him? Image from says.com

Josiah made his own living doing odd jobs like fixing pianos, teaching violin and training other cyclists. He also tried to contact Majlis Sukan Negara (MSN), but they never responded to him. Eventually, he flew to Malaysia to visit his grandparents, and to pay a visit to MSN personally to convince them to train him. MSN agreed, and the rest was history.

Malaysia’s cyclists has a history of greatness, and we could probably expect much more

From extreme training to being disowned, we had no idea that Malaysian cyclists actually all so terror. Just to add on to the already amazing list, there was also the time that Azizulhasni placed 3rd in a race with a giant splinter  in his left calf. It wasn’t an exaggeration when we said “giant”. Image from dailymail.co.uk Following a collision in the final race of an event, Azizulhasni got a piece of wood stuck in his leg. Rather than go to the hospital immediately, he got back up to finish the race, winning 3rd place while becoming the Champion of the overall event.

From all the cases above, we can see how much success you can achieve if you would just maintain that iron determination. And knowing that Azizulhasni’s achievements are but a part of a long list of accomplishments accumulated over the decade, there’s no doubt that we could certainly expect more to come.