So, what’s been going on lately is that the Wall Street Journal (WSJ, international business newspaper) published an exposé that allegedly linked our Prime Minister to RM2.6 billion being transferred out of 1MDB into HIS PERSONAL ACCOUNTS!!!

And it seems that anything that our Prime Minister says in reply to these allegations seems pointless because people just don’t seem to have a very good opinion about him atm; like when he tried to refute these allegations and all he got were comments like these.

But that got us thinking, is there nothing Najib can do to quash these allegations? Well, if you refer to the comments above, some of them have already been giving suggestions of what Najib can do to fix the situation. So let’s have a look at 5 simple things Najib can do to clear his name (or at least part of his name).

1. Show everyone his bank accounts

So one of the biggest things in contention right now is Najib’s bank accounts. The Wall Street Journal reported that RM2.6 billion of 1MDB’s funds was transferred to his personal bank accounts, specifically, his Ambank accounts.

Since then, many people (that you can read about here, here, and here) have asked both Najib and Ambank to come forward and prove that these are not true. But beyond that, what if from here on, he (and every other leader in the future) just be transparent about their finances? Because he did say he had nothing2hide. Click to read about the time we went to the nothing2hide forum.

And it’s not like what we’re asking for is a radical, never-been-done-before, move by a government. Countries like the USA, UK, and Australia all have some sort of regulation that requires those running in the elections to declare their finances. You could say that Najib, (and all our politicians) are 6 years overdue.

Well, it paves the way for him to be cleared of the allegations put forward by WSJ (and the Sarawak Report which we talked about here). For now, at least.

“I am certain that Najib has nothing to hide and the best way to end these attacks on his credibility is for him to allow Ambank or any other banks to reveal all the accounts he has opened since he became prime minister in 2009.” – PKR’s Rafizi Ramli as quoted by MalaysiaKini.

Revealing his bank accounts can also prevent questionable situations where the rakyat is left wondering where his money came from. For example, the time when people were questioning as to where his stepson, Riza Aziz, got the money to finance the film ‘The Wolf Of Wall Street.” 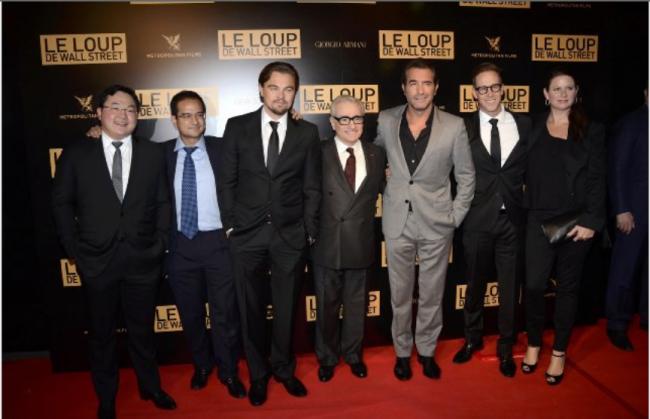 When WSJ broke the news about Najib’s alleged bank accounts, one of Najib’s first responses was to take to Facebook and to say that none of these were true. It’s no surprise how Malaysians have responded with disbelief to his answer.

The Malaysian Insider reports that Malaysians are not too impressed with his answer.  Comments on MalaysiaKini ask why doesn’t he just explain what is wrong with the allegations instead of just denying them. The comments from people vary but it seems to be this, people don’t believe his answer at all.

But this disbelief stems from a lack of knowledge. People don’t know who to believe. The truth is, Malaysians still don’t know the err….truth. We believe one of the reasons for this is that Malaysians are misinformed about a lot of things. When we wrote our initial article about 1MDB, a lot of us in the CILISOS office thought that it was something like BR1M. And 1MDB has been in existence since 2009!

But anyway, one thing that Najib can do to ensure that people don’t end up clueless when an issue blows out of proportion is to have more debates. Our Prime Minister has always been one to shy-shy cat away from debates, even going as far as saying that debating is not part of our political culture. But maybe that need to change eh?

Debating about policies has always been a part of many negara maju or sedang maju, so to speak. USA, UK, Germany all have their leaders debate policies during elections (just to name a few). Even our neighbour Indonesia have started to organise presidential election debates so…why can’t we? As of now, it clearly looks like whenever our Prime Minister declines a debate, it looks like he’s afraid of something. Ironically, his ‘Nothing2Hide’ event would have been close to a debate (seeing that Tun Mahathir was going to be there) but he still FFK.

Which more or less ended up looking like this. 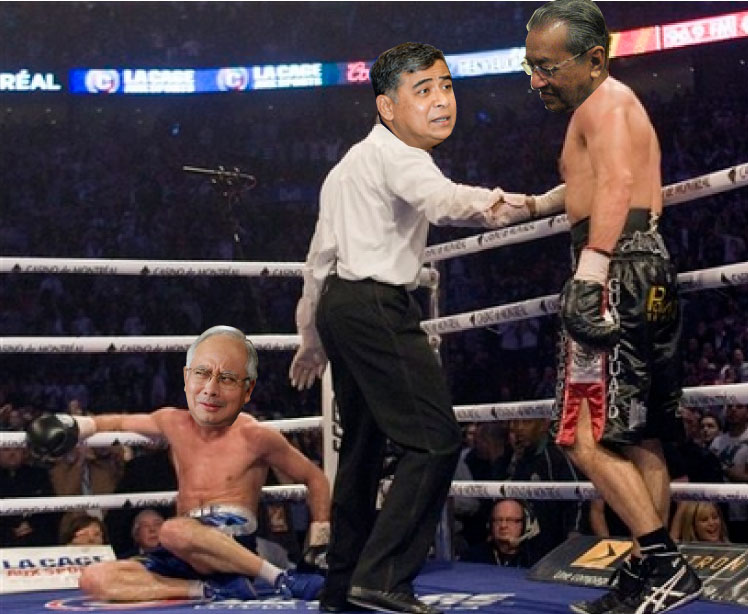 Disclaimer: Image used for illustration purposes only. Boxing match did not actually happen. Click to read our article about Najib FFK.

And if Najib really was interested in clearing the air, he’d be open to debating on not just policies, but all these allegations that he claims are part of a plan to bring him down. In fact, he’d already have a willing opponent in Tun Mahathir.

In other words, keep your err….word. Lol. That’s something that a few quick searches here and there have shown us: That Najib is constantly accused of not keeping his word.

But like we said, that the biggest one. We found many other reports of people voicing their dissatisfaction with Najib’s broken promises. In fact, we found an article from MalaysiaKini that lists down a number of broken promises from Najib’s administration. (The Teoh Beng Hock case can say got progress la, but it’s hardly resolved.) Well, this is a no brainer isn’t it? When you keep your word, people trust it.

It won’t be instant, but keeping his promises from now on would go a long way in showing that he wants to regain the trust of his people. He can start with 1MDB. Najib has promised to resolve it by the end of the year. We’re quite sure many of you know that the Malaysian Anti Corruption Commission (MACC) and the Electoral Committee (EC) aren’t independent bodies. By that we mean these two are not stand alone but actually under the Prime Minister’s department.

So what Najib needs to do is make the MACC and EC an independent agency. How? Well, BERSIH provides a list of things that should be done to ensure this.

How can people trust the MACC to be fair when the Prime Minister himself appoints the people within the MACC (in fact, one of those involved in the Teoh Beng Hock case got promoted). On the other hand, our government says it is satisfied with the EC despite their international rank being quite cia lat la (114 out of 127 countries included in study okay pls). And if the BERSIH protests are anything to go by, people really do want free and fair elections. They probably won’t react so well to just more promises about electoral reforms.

So we believe it’s fair to say that if Najib does take steps to make the MACC and EC independent, it really would send a message that he is putting people first.

5. Don’t be quiet against extremists if you’re preaching 1Malaysia

Our Prime Minister has often painted himself and Malaysia as moderate. Just last year, Malaysia was appointed to the United Nations Security Council with the theme of our campaign being “Peace and Security Through Moderation”. Our Prime Minister was also part of this campaign and he was reported as saying things like “dialogue over confrontation, negotiation over conflict”.

However, this doesn’t seem to be the case back home. Our Prime Minister has been largely silent when extremism is involved. Examples include the Allah issue, the cow-head protest, and Agriculture Minister calling on people to boycott Chinese traders, just to name a few.

All this has prompted people, both in Malaysia and Internationally, to point out that we’re really not that moderate after all. The Economist, Huffington Post, and Forbes, have all published articles about a moderate Malaysia, and let’s just say, they disagree. At home, former law minister Zaid Ibrahim has asked Najib to demonstrate his moderation instead. And if Najib did show it in his actions, he would prove all of these people wrong. But beyond that, he can show people that their concerns are not gone unheard. And people are concerned. In fact, last year a group of 25 prominent Malays grouped together to speak up against the extremism in Malaysia. That group has since grown to a membership of 52 people.

And maybe that’s one place Najib could start, eradicating extremism by working with moderates. It was reported that people from the Prime Minister’s Office had already met with them but HE hasn’t actually met with them. So maybe it’s time to speed things up a bit?

Do these, and ye shall regain the trust of thy people!

Actually, no. We cannot guarantee that all these is enough for Najib to regain the trust of the rakyat. An article by Forbes talks about how Najib’s reputation has been damaged regardless of the outcome of this whole….poopstorm.

“Malaysia is a place where reputation matters enormously and where bad press sticks. Even if the attorney general does not feel the evidence is strong enough to prosecute, there is a very strong sense that Najib has been weakened regardless.” – Chris Wright in his article on Forbes.

But all we’re saying is that if Najib is serious about silencing his critics, these 5 things would go a long way in restoring our faith in our PM. And maybe we’ll even be willing to carry placards professing our love.

But that’s from us. What else can Najib do to silence his critics/regain the trust of his people? Let us know what you think in the comments below?