By now, most of you would have already seen the video of a woman in a tudung assaulting some poor Chinese uncle about a relatively small fender bender. You would have also seen the comments surrounding the video, ranging from angry to REALLY ANGRY to “I WILL BASH YOUR FACE WITH A STEERING LOCK”!

Even the team here at CILISOS has received several requests to write something about it, and so like the public servants we are… here we go.

1. Has this been shared enough already? Well, according to the RakyatPost, this video has already been shared 17,000 times. In true Malaysian style, there are even numerous memes about it. Any article published about it on other sites is instantly shared a gazillion times, and Facebook groups have been set up to ‘honour’ her achievements.

BUT there’s a reason why you won’t find any links to any of these here – and it’s simply because we don’t think it needs to be shared anymore.

2. Have I ever been angry over something stupid?

from The Malaysian Insider

First off, no we are not condoning her fit of seemingly blind rage. Her response to the little fender bender is indeed quite extreme. Her racial comments are also largely unnecessary. However, in our undocumented moments, have we also thrown a plate, or maybe punched in a postbox, spanked our dogs or even *gasp* called someone a Cina, or a Chowahbeng, or a rempit or a Keling?

We live in an age of super-documentation. Everyone has a smartphone and they’re not afraid to use it. What this means is that very little goes unobserved, and a whole lot of it gets shared on Facebook.

3.  Was anyone actually hurt?

The poor Uncle’s car (what car is that anyway?) was given a good bashing, and the Peugeot looks like it might have suffered some mild post-traumatic stress, but the truth is, no one actually got physically hurt.

In fact, the nice people at DiGi even offered to pay for not only the damages for Uncle Sim, but rather awesomely, for Kiki’s damages as well, which means in effect, even the cars aren’t suffering any permanent damage.

Probably the only hurt here is the amount of people now asking DiGi to pay for other stuff that’s happened to them. 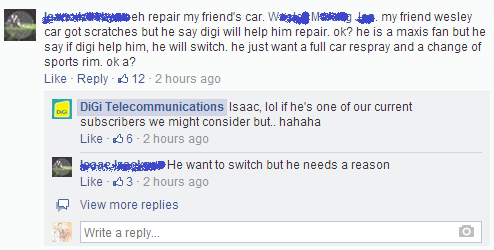 How big is your #30HariBaik budget guys? Our server got er… crashed the other day too. Email us!

4. Has she been punished enough already? Considering THAT, and the sheer amount of bad vibes about her, we at CILISOS think the answer here is YES. Her wedding business is probably not going to be doing very well, and her Facebook account has already been deleted. She probably won’t be able to look her friends in the eyes for a very long time.

She’s even issued an official apology on her FB, and contacted Uncle Sim, who has apparently forgiven her.

UPDATE: Ok, so apparently that official apology was when her account was hacked. But actually she did apologise in real life to Uncle Sim.

– and yes, apparently she was just having a bad day.

“I couldn’t think at the time. It was on the spur of the moment. It was a huge mistake on my part. I accept whatever abuse that is hurled at me because I made a terrible mistake,” – Siti Fairrah Ashykin (Kiki).

NAH, BACA:
Why do mandarins give you sore throats but oranges don't? We found out.

We started the ball rolling with a vote for Yes. Also, partially because she didn’t do anything to us personally. Come on guys… it’s Ramadhan! Evidence has emerged that it might’ve been her sister that was the culprit, which could mean that the entire FB community might have been shaming the wrong person. Yes, everyone has handphones these days, but not all of them have kickass cameras. It’s kinda hard to tell who it is.

6. What’s the worst that could happen? Now this is the part you might not expect. Ever since Facebook made things go viral, public shaming has resulted in some pretty harsh consequences. It’s a bit of mob mentality mixed up with our inner desire for supporting justice. What kind of consequences? Well, on the modest side, a demotion or an expulsion, and on the harsher side – even suicide.

But according to an article titled “Why You Should Think Twice Before Shaming Anyone on Social Media” in WIRED Magazine, , what’s most worrying is this.

“The fundamental problem is that many shamers, like Richards, don’t fully grasp the power of the medium. It’s a problem that lots of us need to reckon with: There are millions of Twitter accounts with more than 1,000 followers, and millions on Facebook with more than 500 friends. The owners of those accounts might think they’re just regular people, whispering to a small social circle. But in fact they’re talking through megaphones that can easily be turned up to a volume the entire world can hear,” – Laura Hudson, WIRED.

In Singapore, there’s a petition signed by more than 22,000 people calling for the close of STOMP.sg, which is a ‘citizen’s reporting’ site that allows people to report ‘news’. Yes, those inverted commas are there cos we don’t think much of the site. It’s packed with what most people would call private moments, exposed to a massive public, hungry for more scandal.

Articles there range from migrants passed out drunk at MRT stations to people getting angry seemingly for no reason. There also seems to be a massive archive of people who don’t give up their MRT seats for the elderly, sometimes not illogically.

When this many people seem to call out for blood, corporations are pressured to give it. And people get fired, or boycotted, or worse. In this case, there’s every chance that Kiki’s business dreams are over, and even after that… there’s every chance that the next job interview she’ll have to go for will be with someone who’s seen her video, and like many of you, has a strong opinion about it.

Thing is, when you’re watching a 3 minute video, or seeing a single status update online, you’re getting a short glimpse into someone’s life. Take any of our status updates on their own, and you can make us look like Dr. Evil.

Sure, it’s cool when you read that an expat named Anton Casey  got fired due to his racist comments about Singapore, but take it from us here at CILISOS – everyone says stupid things, and no one wants to get fired… so do take some time to think before you share.