Every time when my friends from West Malaysia see pictures of Kota Kinabalu and various districts in Sabah, I blush at their uncontrollable happiness.

Located in the heart of Sabah, lies Kota Kinabalu – a city soon to be KL’s bustling counterpart. Prior to heavy commercial establishment, KK was once a small fishing village. Back then, it was known as Api-Api. There are several plausible origins behind its name, but the more prevalent one would be the blaze that destroyed the former administration centre. It was later renamed Jesselton, after Sir Charles Jessel, Vice-Chairman of the British North Borneo Chartered Company in 1899. Jesselton, before land was reclaimed from sea in the 1930s. Photo courtesy Sabah Museum via Sabah Tourism Board.

Jesselton was selected as the capital city in 1946. Later in 1963, North Borneo joined the Federation of Malaysia and became known as Sabah. The colonial name Jesselton was then changed to Kota Kinabalu.

From that point on, KK plays a vital role as a commercial hub and tourism centre. While I was away for study in KL, I wasn’t aware how time has painted a different vibe to the local landscape with the increase of building and road infrastructures.

For instance, the flyover shown above. Before flying off to study in KL, it was still under construction. The thought of seeing it was a rarity: To think KK is moving away from the “town” phase. Now that I am back, it is safe to say KK is slowly embracing a strange, uncanny environment to KL. Photos from i.pinimg.com and migc12.com

If you are from KL or an orang KK who had just returned, you gotta admit that Imago KK Times Square (aka Imago) is the first thing that comes to mind after shopping at Mid Valley Megamall.

Located in the heart of Petaling Jaya (Mid Valley) and Kota Kinabalu (Imago), the two mega malls share a resemblance to their identical rectangular building structure, size and interior designs.

The only difference is that Mid Valley has an interlinked high-end mall called The Gardens whereas Imago has outdoor dining restaurants with local live band performances. The Gardens isn’t excluded from the uncanniness either.

Being the popular brothers they are, Mid Valley and Imago, however, share one annoying personality trait: the infuriating lack of parking spaces. All those pusing-pusing from the 1st to the 8th car park floors can be quite a headache.

Probably right now you’re scratching your head as to why this is a big deal for KK folks (at least for me anyway). Well, it is rare for us to see premium mega malls and ones that are still up and running, unlike the smaller shopping malls that are struggling to sustain.

Kota Kinabalu was granted city status 17 years ago and as you can see from the photos, a lot has happened – starting with the mushrooming of high-end mega malls. Not sure about KL but as a KK-nite, accommodating around 16 shopping malls and mega malls in the city alone seems like a hefty number to me. Back in my teen years, I thought having our good ol’ Suria Sabah at the centre of town is enough.

As of date, the current bus terminal in KK is lacking of space which subsequently worsen the traffic in the city. It is temporarily situated in front of Promenade Hotel and Wawasan Plaza under a long stretch of zinc roof. Tourist buses and public mini vans stationed in front of Promenade Hotel for the time being.
Photo taken from www.1.bp.blogspot.com It was a nightmare.

To resolve this problem, the state government proposed a new construction called “KK Sentral” to relocate all the mini vans and buses by the sidewalk. Even though the construction has been completed, KK Sentral has yet to be in full operation (I’ve personally dropped by a visit around two months ago). I guess you’re wondering by now if KK Sentral shares the same trait as KL Sentral. Ironically, it doesn’t.

KK Sentral bears a stronger likeness to Pasar Seni Daya Bumi whereby they cater to buses, vans and cars. Till then, the public buses would have to take the front of Promenade Hotel and Wawasan Plaza as a temporary bus terminal.

As the human population continue to expand throughout Sabah, fellow Sabahans are earnestly waiting for the day when there are railway stations available in all districts. Many people in KK came from far away districts like Sandakan, Tawau, Keningau, Kudat and others for job opportunities.

In terms of the role it plays, KL Sentral is much akin to the Aeropod which will be completed in completed in 2022. Much alike KL Sentral, the Aeropod is not only an upcoming train station, but it is also a future commercial hub where hotels, residential suites and shopping malls are built within the vicinity.

The main reasons behind its proposed establishment is a response to revive the existing railway station in Tanjung Aru to further enhance mobility for both locals and tourists.

3. Speaking about the Aeropod, we’re probably getting an LRT soon too! A closer look at the Aeropod project (artist’s impression). Photo taken from BorneoPostOnline.

As mentioned earlier, it is proposed to develop a mixed commercial and residential development. It will be carried out on the remaining part of the land measuring approximately 41.81 acres (“Project Land”).

With that, may I proudly announced that the foundation of the Aeropod has been laid for the much anticipated LRT railway system!

Currently, transportation modes that are currently available are limited to coaches, public buses and mini vans.

Aeropod Deputy General Manager Chan Tah Seong commented that the train network is an important public transportation in developed countries, and when efficiently managed, it could connect the public to their destinations fast as well as saving them the hassle of parking.

“When you go to developed countries, the train is the main transport; people don’t drive cars. It is reliable and can transport a huge number of people in a short time,” he said. This sentiment, in particular, echoes the feelings of all Sabahans who would want to visit their loved ones as soon as possible in far flung districts.

Safety is a huuuge concern too. Having potholes as many as the stars in the Kundasang sky (can’t see much in KK), coupled with landslides and boar stampedes, Sabahans have to brave the rough roads.

Being the most affordable airline in the country, Airasia only offers two routes to Sabah districts Sandakan and Tawau.

With the LRT, as a Sabahan, I believe it will strongly improve the quality life of everyone in the state. Destination routes will expand, not to mention it will be safer to travel and might just be a more economical choice.

Till then, we’ll be waiting eagerly for Aeropod’s “grand opening” someday 😀

Why the demand for high-rise condos? Well, there are several factors why landed properties in KK is no longer a practical choice. And one reason being is that houses in Sabah are damn expensive. In fact, one of the most expensive states to live in Malaysia. A bungalow house in Putatan district, Sabah. Photo from www.estate123.com.

According to Institut Rakyat Executive Director Yin Shao Loong, he said that homes in Sabah “were twice as unaffordable than the national average of RM251,731”. He also pointed out that the average home in this state costs 11 times more than a family’s median annual income of RM34,320.

In comparison with KL, the average housing price is RM576,991. The median annual household income in the capital city is only RM70,164 or RM5,847 a month.

That being said, housing costs that is thrice the annual income of the median household is unbearably unaffordable. Lands are a luxury to have.

“The Loft”, one of the newly sprouted condominiums surrounding Imago mall.
Photo taken from www.skyscrapercity.com

In the past, the tallest buildings KK-ians have witnessed were probably around the height of Menara Tun Mustapha (400ft tall).

Presently, we have many constructions including condominiums which appeared as though they are trying to overshadow humongous green hills like the ones in the pic.

Jesselton Residences, Harrington Suites, The Peak Vista…Exclusive condos such as these are made for obviously those who can fork out that kind of money. This raises the issue of an undersupply of affordable houses for low to medium income individuals. As grand and magnificent as they look, Sabah’s signature sunset had been partially hidden since. That radiant orange-to-yellow glow would have to move over. Being a state that is surrounded by many beautiful islands including the ones nearby KK, it is no wonder Sabah has received an all-time high of 3.43 million last year.

Unsurprisingly, China was (and still is) the biggest contributor which recorded a 51.8% increase from 2015. Honestly, I cannot fathom the number. It is like a second China here.

Australia was also reported to be an emerging market, despite having only one direct flight a week from Perth. 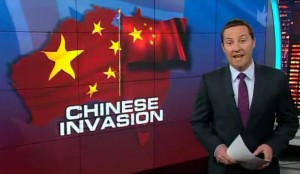 “You aren’t the only one experiencing the invasion, sista”
Original pic from www.sydneyaffairs.com

Clearly, KL has catered a much larger volume of tourists. For instance, around 11 million international visitors flocked to the Malaysian capital in 2015. The highest number of visitors recorded was 11.63 million in 2014.

6. And Finally, The (Inevitable) Traffic Jam This was taken within vicinity of the Filipino Market in KK.
Original pic from www.mygola.com

With all these ongoing city projects, moderately quiet roads like the ones along Segama, KK Coastal Highway, Gaya and Sinsuran have become more congested. Won’t be surprised if ALL roads would be jammed up one day just like in KL.

According to Borneo Post, statistics recorded in 2000 showed only 77,000 vehicles enter and leave the city in a day. In 2016, an estimated 140,000 vehicles dominate the city’s streets on a daily basis with the increase of car ownership each year. From a manageable, moving traffic, it has become to a 45-minute crawl or a one-hour standstill in KK. In comparison, folks in KL spent a staggering total of 250 million hours a year stuck in traffic on average during morning peak hours based on a survey done by World Bank in 2014.

In everything, balance is key. As KK city continues to undergo a series of aggressive economic growth, environmental sustainability and heritage conservation will be brought into question. Might not get to see merdeka fireworks anymore.
Original pic from www.rungitom.com

Take the story of the Atkinson Clock Tower in KK, for instance. This year, KK City Hall had given the green light for a multi-storey complex to be built next to the 112-year-old Atkinson Clock Tower. Activists feared this will not only be an eyesore to the heritage site, but also it will lead to a possible landslide (like how it happened back in 2013). Approval for the building of the 18-storey hotel and shopping mall within the clock tower’s vicinity is still pending from the state government.

For most of us Sabahans, the clock tower is a novelty to have in the centre of KK city. It is a memorable British legacy that stood the test of time beginning from World War II. But if the state gov decided to approve of the multi-storey complex, KK city wouldn’t feel the same again.

It would be a lie to say that urban development didn’t bring any positive changes. If it were so, we won’t have enough schools, hospitals, convenient mode of transportation, convenient stores and more. But hey, maybe if KK turns into KL, maybe non-Sabahans would FINALLY stop thinking that we live in jungles?

Share this article:
NAH, BACA:
A Malaysian mother refused to get her child an OKU card. And she's not the only one