Let’s face it, how many times have you watched a Hollywood movie that takes place in Asia or features Asian characters and went “WTF am I watching?!”? Yeah, accuracy of portrayal has never been Hollywood’s strong point. We rest our case.

With that said, let’s look specifically at Malaysia. How has Malaysia been portrayed in Orang Puteh-made games, songs, and movies?

Other than Zoolander (which we will be leaving out of this article due to it being the most well-known example), we’ve managed to uncover some other portrayals from the sorta-accurate to the completely cringeworthy. But more importantly, we learnt a number of lessons from these as well. Archer is a long-running animation for adults that riffs on workplace culture and spy movies, but with tons of dirty jokes and promises of nudity that were never realized. Basically, the show revolves around Sterling Archer, who’s a secret agent at ISIS – the International Secret Intelligence Service – that’s run by his mom.

In a 3-part series opener titled Heart of Archness, Archer finds himself taken hostage and later being declared the king of the pirate fortress of Pangu Island. Unfortunately, despite forming a really strong lacrosse team, his lack of leadership causes an unhappy pirate named Bucky to call for an election called Melawan Raja which involves a fight with Bucky’s girlfriend. This eventually leads to a mutiny which gets Archer being captured again, while his ISIS colleagues are en route to rescue him. Yeah, you kinda have to watch it for yourself.

In any case, although Pangu Island is vaguely located in Polynesia, any Malaysian watching it on Netflix would instantly recognize (and be amused by) the badly-accented Malay. Or it could be Indonesian. We can’t really tell.

Unfortunately, the initial excitement of having Malaysia viewed as a highly developed country was dampened by spliced-in scenes of Malaccan slums alongside the Twin Towers, even provoking an angry response from Dr.M.

We tried looking for a screenshot of the slums depicted in the movie, but every search variation we used on Google images returned this result:

The twin towers were a little taller that day.

Or it might have been there but we didn’t notice.

Update: Outdated joke. We don’t have an office anymore.

This Ben Stiller movie involves the brainwashing of the protagonist Derek Zoolander by the evil fashion mogul Jacobim Mugatu to assassinate the Prime Minister of Malaysia due to his efforts in eradicating sweatshop labor from the country. Due to the depiction of sweatshop labor in Malaysia as well as for the plot involving the assassination of the Prime Minister of Malaysia, the movie was banned upon release. Naturally, everyone went out and bought a pirated VCD copy.

If you haven’t seen this movie, we’ve got you covered:

Despite evidence in a previous CILISOS post, the old Proton Saga taxis are frequently used as cover from enemy fire in Socom 4.

You heard us right. Proton Saga taxis specifically. This game is extremely detailed in its depiction of Malaysian sights and sounds.

Game-wise, this game is pretty generic as far as first-person shooters go: A crack team of US Navy SEALs are deployed to Malaysia to take out the leader of a revolutionary movement called the Naga. BTW, this is not to be confused with Naga DDB, the top marketing and communication firm in Malaysia that totally didn’t pay us to plug their name into our articles.

But again, what really impressed us were the developer’s eye for detail. Take for instance, the signboards: The difference is that the in-game signboards actually leads to where it says.

And the cityscapes almost make you feel like you know where exactly in KL this takes place: See what we mean about bulletproof taxis? Malaysia boleh!

We do have one minor gripe, though, that the Malay spoken in-game sounds much closer to Indonesian.

The location in which the events of this song takes place is made clear 17 seconds in with the lyrics “Flower of Malaya, I cannot stay”.

An English cover of a Chinese song titled “Méigui méigui wǒ ài nǐ“, Rose Rose I Love You relays the parting words of a sailor or soldier to his “Flower of Malaya”.

You’re probably wondering “Why is this song even here? It’s a sweet song wat.” Sigh. As much as we would like to agree with you, here are two scenarios:

Also, you’re probably assuming that the titular “Rose” is a Chinese maiden, but we like to challenge conventions. This is purely speculative, but we’re thinking it may be an Anglicization of “Ros” which is a common diminutive form of  names such as “Rosmah,” “Rosmawati,” or “Rosdayanti”

Extra Sos: One of our readers, SEATUX, pointed us towards a cabaret performer named Rose Chan to whom the song is said to have been attributed to. Songwriter Wilfrid Thomas lived in Australia and was smitten enough to write the song after watching her perform in Singapore. Here’s a picture of her (raunchier ones available on Google images, just sayin’) 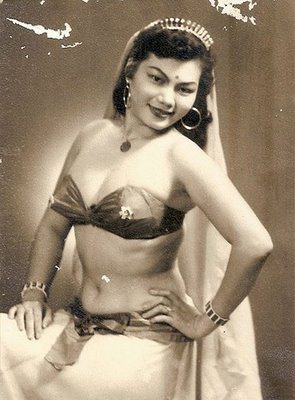 This find also led to our discovery of a quad (You read that right – it’s in English, Malay, Mandarin, and Tamil)-lingual cover of the song by Dato’ Zainal Alam:

NAH, BACA:
Syria is so war-torn that they're playing for the World Cup... in MALAYSIA?! The Twin Towers were prominently featured as a story arc in 2002’s Hitman 2: Silent Assassin. Spanning three missions, our favorite botak assassin is brought to Malaysia to take down a hacker residing in one of the penthouses. As in the symbol of Malaysia’s march into first-world status Twin Towers. As in at-the-time tallest buildings in the world Twin Towers.

However, we can’t help but laugh tears of WTF-fery as we progress through IO Interactive’s depiction of the Twin Towers.

Where do we even start? Oh hey, how about what you’ll be greeted with once you enter? Also, as you progress through the levels, you’d encounter your target’s “private security” (unintentional pun is unintentional) Based on recent events, we don’t think JAWI would let that slide.

Now, the wily Danes at IO Interactive have been known to add hidden messages and content throughout the Hitman series, and we think the following almost borders on a conspiracy theory.  First, do an image search of Malaysian police uniforms. Nevermind, we just did it for you.

Now compare that to the ones worn in the game: Both uniforms don’t look anything alike, do they? But the uniforms worn in the game DO resemble these: As far as this game is concerned, we’re still a British colony. Ouch.

Also, in-game Twin Towers management probably hasn’t received the memo about not hiring foreign workers as security guards, since they all sound….well, foreign. Watch at your own risk though, the dialogue is cringeworthy.

“The coast of Kuala Lumpur” is mentioned somewhere in there, but we want you to listen to this because the song is pretty awesome.

This song really spells it out for you: Rene is a Malaysian prostitute who offers her services to sailors and is, apparently, really good at scrubbing the deck, if you know what we mean. Okay fine, We’d usually come up with better innuendo, but this song’s got it all covered.

Seriously, how do you beat

“… a docker’s delight and a ship’s in every night”

“A line-up in the warehouse no trouble at all

If you can spare the money, you’ll have a ball

She’ll have your oars out.”

But all that said, what the heck is the “coast of Kuala Lumpur”? Unless you mean Port Klang

8. Singaporeans are protective of their accent (Just Cause 2, 2010)

Just Cause 2 takes place in a fictional location called Panau, which is “somewhere in the region of the Malay Peninsula.”

“Panau” is also the Malay name for a chronic fungal skin infection, which is a coincidence because you’ll definitely be developing a rash from the dialogue of a character named Bolo Santosi:

The accent has received an equal share of laughs and criticism because it sounds like a very bad Singaporean accent. No offense to the hearing-impaired

…western audiences are not familiar with South-East Asian accents and the producers wanted something different and new to western ear, also adding in that she had not meant for the accent to be Singaporean but an exaggerated version of it, which was meant to be exotic, unfamiliar and unreal. She had also considered her role to speak in a “unique” accent a pleasure. – Just Cause wiki

So where does Malaysia come into this? Well, the storyline involves the operative of a secret CIA organization specializing in overthrowing non US-friendly regimes. He’s sent to an island nation in Southeast Asia that was formerly controlled by the Dutch, Portuguese, British, and Spaniards. The previous President prior to the events of the game was responsible for modernizing the nation with a highway system, an international airport, and a lot of skyscrapers. His successor undid all that, with the gradual stripping of his citizen’s rights, misuse of public funds, and massive propaganda campaigns.

Actually, this isn’t anything like Malaysia at all.  We apologize for the error. Oh, one of the voice actors, Jason Chan, is Malaysian. And he’s a Power Ranger.

We came across a surprising amount of content in our research for this article, but unfortunately many did not make the cut. Here are some of them.

It’s not clear where this takes place, with suggested locations being the Mariana islands, Papua New Guinea, Malaysia, Indonesia, and the Philippines. We do know that it starts in Thailand, but wherever the characters ended up, the natives spoke in really weird accents and native languages ranged from Malay/Indonesian to Maori and Samoan.

Let us know if you can pinpoint this accent:

2. Koala Lumpur: Journey to the Edge

We really wanted to put this in, but other than the name it was completely unrelated to Malaysia. Also, our editor has enforced a ban on bear puns as they don’t meet CILISOS writing koala-ty standards.

Malaysia has been a location on many racing games, some even including Proton cars in the selection lineup. However, they aren’t interesting or facepalmy enough to include here. Sorry racing simulator fans.

Sorry Little Monsters, but Mama Monster didn’t make the list since Malaysia was just mentioned as a namedrop. In fact, Indonesia gets more headline mention than we do – This episode has the girls figuring out why countries around the world have turned their landmarks into amusement park rides. For Malaysia, we turned our Twin Towers into an 88-floor Drop Tower. Strangely enough, Malaysia was spelt as “Malaisia” which is totally weird because the French word for Malaysia is Malaisie. Soooooo…. typo?

6. Article plug: We have a whole separate article where Malaysia was totally destroyed

…in TV and movies of course. Click here to read, and don’t #PDRM us.

Lastly, did you know that the Simpsons referenced Malaysia in one of their episodes? No, seriously. It’s right here: