Everything I know about journalists I know from films: they are all ridiculously attractive, have shouting matches with their editors, and their 10,000 word front page exposes are completed in a 2 minute montage while the newspaper spins clockwise. It set some unrealistic expectations for me, because my newspaper never spins when I buy it.

So, to know what’s what, we asked a few journalists, ex-journalists and editors what are some things that we, the average citizens, will never know. But since we’re in Malaysia and prefer playing safe, they’re all anonymous. TRUE STORY: to make it more drama, one of them completely pulled out and retracted all statements, fearing a call from They-Who-Shall-Not-Be-Named.

1. Yes, the media is controlled, but the reason some things don’t get printed will blow your mind

Let’s just get this one out of the way. Yes, our papers are controlled by political masters. Yes, there are controls on journalists. Malaysia ranks 146 on the 2016 World Press Freedom Index. But on the bright side, our press freedom ranking is higher than the Malaysian football team’s FIFA ranking. 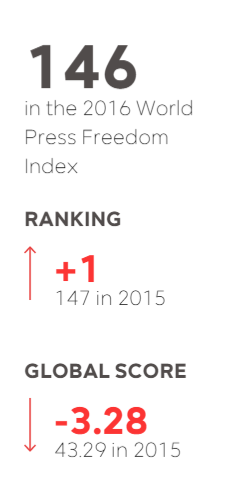 We went up by 1! Malaysia Boleh! image from rsf.org

“Working in Malaysia I have faced my fair share of people or governments trying to control what gets published. But that’s the case anywhere in the world. You have to be smart in fighting your battles, I suppose,” – E, editor, anonymous

Sometimes the news IS there, but like your repressed childhood issues, it’s hidden way deep inside.

“…we are unable to publish content which commands more news value than others if they say it shouldn’t be published, or (it will be) hidden somewhere, buried in the paper instead of the front page. ” – Izham, journalist, first name only

But this one reason for why things don’t get printed will BLOW YOUR MIND.

“There are controls, but sometimes things don’t get printed not because we can’t. There’s that aspect, like political masters who won’t be happy with what they put up, but a number of times it can be because of space. The physical dimensions of newspapers means…we can’t put everything down, only what the angle permits.” – C, journalist, prefers to remain anonymous.

Sometimes it’s not the masters, but your boss who doesn’t like your angle.

“…after it became public knowledge that s few people had died during FMFA, I was told to write an expose…the editor on duty said that my article sounded like I was promoting drugs and called my expert a quack. Then they got someone else rewrite my article to make it sound like “DRUGS ARE BAD! ONLY DODGY SHADY PEOPLE DO DRUGS AND YOU SHOULD STAY AWAY FROM THEM!!” Pffsh.” – H, angry ex-journalist, anonymous.

But here’s a bigger reason why certain things aren’t printed.

2. Sometimes, they only know as much as you do

Question: What?! You mean journalists don’t attend a secret meeting where everyone wears masks and robes and gathers in a circle around the leader who gives insider information?

Answer: Yes. And that is an oddly specific example. “…just because I’m a journalist, that doesn’t mean that I know all the secret dealings the government does. I also don’t have any minister’s phone number.” – H, ex-journalist, anonymous.

“…we hear a lot of rumors…and we may know about something, but how can we confirm it? …we can’t print rumors…if there’s no confirmation or anyone willing to speak up and say, ‘This happened’, we can’t confirm that. And it can’t be just one person, it has to be a lot of people.” – C, journalist, anonymous

Question: BUT I DON’T CARE IF NO ONE WANTS TO CORROBORATE IT OR NOT. HEARSAY AND THIS SARAWAK REPORT ARTICLE/EXPOSE IS GOOD ENOUGH.

Answer: That is not a question.

But being daring isn’t the holy grail of being a reporter. It’s the opposite of wearing Crocs: it feels worse than it actually looks from the outside.

Statement: BUT YOU HAVE THE RESPONSIBILITY TO REPORT THE TRUTH!!!!

Response: Thank you for conveniently leading me to my next point.

3. We want journalists to risk their jobs, but we don’t back them enough Remember when The Edge released the expose on the 1MDB money trail? Everyone knew what it meant: goodbye The Edge (welcome back!). Some were supportive of it.

“Its perhaps the greatest kamikaze act in the media world, its pretty awesome that they were willing to publish something that eventually led to the government shutting down the online paper on March 14.” – L, journalist, anonymous

But some were a bit more pragmatic about it.

“I think it was very bold, but I would have hated to work there. The idea of potentially losing your job is terrifying.” – H, ex-journalist who calmed down a bit

Another one gave a sobering account on the The Edge protest.

“…some of us try and push the boundaries, but we can’t do it so much because if we get in trouble, if government forces come after us, if people sue us, who’s going to have our back?

Remember when The Edge was shut down and there was a protest on that? How much of the public had our backs?

You know who was there? Journalists. Social activists. Opposition politicians. But was there anyone actually from the public standing behind us saying, ‘No, we won’t stand for this’?

If (my publication) gets shut down tomorrow, how many of you are going to support us?” – C, journalist

4. People don’t want to go on the record

One problem journalists will always run into is people not willing to be quoted. Below is a dramatic, based on a True Story™ reenactment of what usually happens.

Person Who Knows Stuff: Hey ridiculously attractive journalist, can you write about this? It is an important issue, I’m an important source and I have important information to tell you.

Journalist: That is very interesting and insightful and important information. Can I quote you on this?

Person Who Knows Stuff: No.

Journalist: But you’re concerned about this?

Journalist: So…can I quote you on that? I need it for the article.

Person Who Knows Stuff: No. And most of the time it’s not Wikileaks level kind of news, where a SWAT team will smash down your windows at midnight for whistleblowing. That one, can faham la. But most of the time it’s safe-ish news to quote, like gerai nasi lemak makcik Limah dekat LRT gives lesser and lesser telur every year. (“You only get a quarter of an egg and 2 ikan bilis now!” – Ariff, freelance writer)

For some reason, people just don’t like being quoted. And when that happens, journalists will have to dig the bottom of the barrel for quotes to strengthen their piece.

“If we can’t quote you on that, what we’ll do is we’ll go to people who do, and sometimes the people who do may not be the best expert, but they’re willing to open their mouths. Which is why sometimes you’ll get really dumb quotes on paper.” – C, journalist

Be honest: how many of you here actually buy/subscribe to newspapers? Here’s a legit, high quality poll to help us determine the numbers.

Now let’s do some simple maths.

That’s a drop of 414,314 units in just 4 years! Ouch! No wonder why journalists are worried for their jobs.

“…while we people may bemoan the lack of good journalism or the death of media companies they are certainly not backing it up with their wallets. I am not blaming people but if you value a Netflix subscription over that of a news outlet then you have to live in society that results from such decisions.” – E, editor

“I think the quality of articles would become even WORSE…I think more news would be exaggerated or made up or sensationalised for the sake of “going viral”. Eventually everyone would succumb to the likes of Buzzfeed and become even more stupid.” – H, ex-journalist, saying it like it is

Well, good thing I’m writing for CILISOS then. I don’t have to worry about Buzzfeed comparisons.

6. You get insulted by everyone, especially strangers

When alternative news sources started to become popular, a lot of news which previously wouldn’t be published started to reach the masses. Which is a good thing, because now we have a bigger picture of the world.

And mainstream news journalists started to get a bad rap from the public. They are seen as evil government lackeys that only report lies and misinformation, unlike the fearless alternative journalists who only report The Truth. And some people aren’t afraid to tell you what they think.

“I take it with humor nowadays. People will be like, oh, you’re from X newspaper? Everyone there is shit. You don’t report the truth. I use the newspaper to wipe my windows, or for my dogs to shit on. You’re all terrible writers. Don’t want to read la, all crap.” – C, journalist

“Some bastards really get snarky sometimes. They say sh** like “F*** la, (your publication) f***ing government paper biased and publish lies all”, which is bloody rude. A few people have said this to me upon first meeting me and I want to punch them.” – H, still angry ex-journalist

Why are you guys so mean? :(((( Journalists are not mantous; they have feelings too. So… can confirm that journalists are certifiably crazy? Why do it anyway?

People who don’t know you insult you for your job, sales aren’t great, and your job could disappear anytime if you publish certain things. So… why do it?

“I love it…there’s just something about being there. You’re at the forefront of history, not a spectator…You can spur debate. You can help people form opinion. You can change the world. That is, if you do a good job on it.” – C, journalist

“As journalists we are always dreaming of that great story that excites us and moves markets or brings down administrations or exposes corruption but that rarely happens for most of us. So we are basically like addicts chasing a high.” – E, editor

“You can actually learn A LOT, which is something I like. All things said, being a journalist gives you access to a lot of things non-journalists have and it opens your eyes to a lot of new perspectives and lets you meet a lot of interesting people. Every day is a new thing and that gets quite exciting.” – H, optimistic ex-journalist

Image from the internet

Of course, there’s always that one guy who ruins the romantic narrative of being a journalist.

“Stumbled upon the job and liked it.” – Eric, journalist

What you can do to help support journalists in Malaysia

Journalists are people too, and want the exact same things as you. Sure, it’s romantic being thrown into prison and having candlelight vigils and Facebook posts shared a million times, but they have bills to pay, lives to live, series to binge watch, and cats to feed. Do you want blood on your hands?

Yes, you can make rallies. Yes, you can make candlelight vigils. But the simplest solution is to just buy a newspaper or subscribe online, and stand with them if they stood for you. And…wait, who are these men in suits and Ray-Ban’s smashing through my window…Eh, bang, takla, ini article je, tak sedisyes…sumpah, video 3gp tu kawan saya yang download…eh, bang, kejap, saya tekan post dulu…

Share this article:
NAH, BACA:
You won't believe what these Orang Asli in Kelantan did to protect their land...