With everything being so expensive nowadays, it’s only natural that we’d try to take things into our own hands and DIY wherever we can… especially if it’s concerning our home (where nobody will actually see!). That’s why we teamed up with our friends at Mudah.my to kepoh into the funny DIY home fixes of our dear Cilisos readers!

But why Mudah?? Don’t you just find second-hand photo frames there?!

Actually, not many people know this but Mudah.my has evolved big time lo. Today, they actually have ‘3 Fs’ deals where you can Find a home to buy or sell, Fix your home by engaging with service providers (e.g. plumbers, painters, electricians, cleaners, renovators), and finally Furnish your home with all sorts of stuff being sold at a fraction of the original price. All these deals are available on one simple platform. Either way, this means you can leave the fixing to a person with the skills, experience and tools – no need to do it yourself. Plus, let’s be honest, DIY home fixes never always turn out right… like these few fellas:

On a cold morning, at 6am, our reader Caro had gone to the toilet to do her business. But after a few minutes, something went wrong…

“I started to feel dizzy, and I actually almost pengsan!” – Caro to Cilisos

No, it wasn’t someone’s leftover poopoo. Turns out, her upstairs neighbour had a case of a clogged toilet drain pipe. “They poured in some chemical and left it there overnight,” Caro tells us. “I confronted my neighbour about what they were doing with the pipe, and they admitted that they accidentally put too much chemical and didn’t know that the effect would be so hardcore.” Thankfully nobody got hurt (acid fumes have actually KILLED a man) or got into a fight! Caro says that they felt bad for almost knocking her unconscious, so they all had a laugh over the incident. (But unfortunately Caro’s toilet plug continued to leaked after that. 🙁 )

Because. Gif from Leverage (TNT)

2. The husband who never learned from his mistakes

So our bros at our BM site, Soscili, had a pretty cute entry. Sharini Hafinaz complained about her husband who just couldn’t seem to give her a break. The funny thing is, she didn’t stop at one story… in fact, she gave us six stories! So much so her husband actually replied to her “allegations”! Hehehe.

First, he tried to fix the fan in the makan area… but because he was too lazy to use the ladder, he took the shortcut and stepped on the round dining table. That didn’t end so well.

“In the end, the dining table broke in two and he fell and rolled down.” – Sharini to Soscili

Thankfully she had more tables, but little did she know another one was gonna be her husband’s victim. This time round, he wanted to change the lightbulb. Yes he’s learned to use the ladder now, but even with it, it wasn’t tall enough. So apamaciam then?

He took his kid’s study table and propped the ladder ONTO IT! Thankfully it didn’t break this time, but it made some irreparable holes on the table which Sharini taped over with cellophane. No money to buy new table ma.

“Aduuhh. So stress la with my husband! I cry with my kids.” – Sharini to Soscili Funnily enough, he also somehow managed to mess up the pipes in their toilet too. Sharini tells us that he wanted to fix the pipe head, but ended up BREAKING the entire pipe… and instead of saving on some $$$, they had to call a repairman to fix the broken wall. 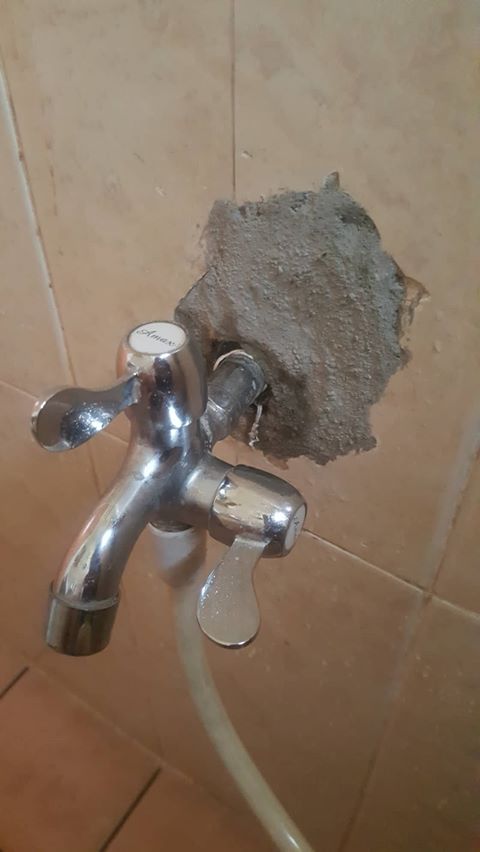 Turns out, her husband has broken a number of things around the house, including an aircond, a TV, and… a brand new helicopter?! Yes. She had asked him to help fix a loose wire on her kid’s new helicopter, but barely even after 3 hours of buying the toy, it had already died and gone to heaven.

But thankfully it’s all good in the home – they mostly laugh about it, today at least. “We gotta bertabah ajelah. He’s still our children’s hero,” she says. Well… one silver lining is they’ve just won a petrol voucher from our friends at Mudah! Err… just don’t spoil the pump and waste petrol k? 😛

Fail-o-meter: 5/5, mainly because it keeps happening! So kesian the family. Husband of all people should really call for some proper help before the rest of the house gg.com 😀

3. Tried to fix curtain, ends up in a fire

Jason writes that he had some old curtains in his room with some loose threads coming off. He got so sick of trimming them with a pair of scissors, so he did what anyone else in the right mind would toooootally do: BURN IT OFF WITH A LIGHTER. *scratches head*

ELMO SAYS BURN IT ALL DOWN

“I decided to use a lighter to burn off the threads. I honestly thought that it would be more convenient to just burn them off!

As you might have guessed, the fire spread through the loose threads and onto the curtain.” – Jason to CILISOS

But luckily for him, the fire died soon after engulfing a part of the fabric. He says that he’s learned his lesson: “Do not play with fire. Fire and fabric do not make a good couple.”

Fail-o-meter: 3/5! Fires can be really scary – in fact, most fire deaths occur at home – so Jason should count his lucky stars that it didn’t get any worse! Nobody give him a lighter in future k?

You know how landed homes in Malaysia have water tanks in their roofs? It’s actually big. REALLY BIG. So big that it has been known to destroy homes and cars!

See? No lie. Photos from Sinar Harian and Berita Harian

And this actually happened to Lim Wei Nan who was only seven years old when the incident took place. To make it worse, it was during Chinese New Year when her dad wanted to move the rusty old water tank in their house.

“My dad gathered some of his friends and my brother to help move the tank.

Everyone was so big and macho, so they thought they wouldn’t have trouble lifting a giant metal tank.” – Wei Nan to Cilisos

But little did they realise that no testosterone-filled muscle could move a tank of that size. “They encircled the tank and tried to lift it up, but when they realised that it was too heavy, they put it back down… but the wooden platform BROKE!” Wei Nan adds. “The tank fell down, rolling down the hill and crushing her dad’s friend’s cars (including my tricycle).”

Adui. That year their CNY mebbe not so huat. Anyway, if there’s one thing she’s learned from the incident, is that “manliness cannot lift a giant tank”.

5. Hot roof almost made someone lose his ears

Nasrul had just moved into his new house when he started doing some minimal renovation work in his backyard. After DIY-ing his cement floor and metal deck roof, he had no budget left for his walls. To save money, he bought seven wooden blinds of various sizes to cover the three sides of his backyard. The plan? To install them all by himself.

“I did the installation during the fasting month, and I got so dehydrated due to sweating in the hot weather. At one point, I was standing on the ladder… and scalded my ear when I came into contact with the hot metal roof!” – Nasrul to Cilisos Bruh that’s not how you do ear candling. Photo from cbsnews.com

Nasrul said that he only managed to install two pieces before having to call his contractor friend. “I then rented his Indonesian worker for RM200 to completely install the blinds,” he adds. “He did in five hours what I couldn’t do in two weekends!”

When asked about the lesson he’s learned, Nasrul seems pretty determined. “I have not learned any lesson from this,” he says. “I will continue more DIYs and if it’s too tough, I’ll call for professional help.”

Fail-o-meter: 3/5. Give you markah kesian cos you almost lost your ear. But if you need professional help, you know la where to go… 😉

6. Neighbour made a hole in the wall and covered with… chewing gum?!

Chewing gum can be pretty useful – Mr Bean used it as ear plugs, and videos on YouTube show that you can even fix a leaking exhaust pipe…  but to cover up a hole in the wall? Hmm.

A Soscili commenter said that his neighbour had wanted to hang a mirror on the wall, but instead of a simple nail hole, she ended up drilling a hole right into his wall! He brought the matter to her and…

“We asked her to tutup elok elok with cement, but she used the chewing gum that was still in her mouth. A lazy creature with no brain!” – Cheman Don to Soscili Not from the incident but it would look the same anyway. Unedited photo from TripAdvisor user topdropper

But the gum was the least of his concerns…

“The one who made the hole in the wall was a spinster, and the ones in my unit are both myself and my roommate – and we’re both single!” – Cheman Don to Soscili, probably now a little more w o k e

7. Sick of birds pooping… used a mannequin as a scarecrow?!

Ok la this one maybe not much of a fail. Actually quite ingenious.

Marcus had a problem of birds coming to his yard and garden furniture. “They would eat my dog’s food and poop all over my lawn furniture,” he tells us. “My dogs are also lazy and useless, can’t scare these birds away at all.”

His solution? A MANNEQUIN! Erm. But a bit creepy la.

He tells us that his mom deals with fashion, so she gets to bring home mannequins that people don’t want. Some of them are chipped up and broken, like our souls.

“In the end, we found a child-sized mannequin and nailed it onto a large board to prop it up. We kept it near the garden furniture and the birds immediately stopped harassing our snacks and pooping on our furniture.” – Marcus to CILISOS

But of the many entries we received, we got one that was pretty kesian.

It’s ok. Happened to us also… except that we kena dumped on the spot. At least Amin Sukarjo got 24 hours.

When it comes to fixing things, maybe it’s best to leave it to the experts

Yeaaaah… you’re NOT gonna call someone to fix something as simple as a lightbulb, but when it comes to the heavier stuff, it probably wouldn’t hurt to consult someone who actually knows more than you would. You don’t necessarily have to ask expensive professionals either – if you look through Mudah.my, there are plenty of budget-friendly, small-time pak ciks and young fellas that are ready to help you 🙂

Most importantly, you won’t get jobs done like this fella la.

It won’t completely relief you of the trouble, but at least it will save you a lot of hassle so you can keep more time for the things that matter.