We know from history that Malaya was colonised by a number of big powers – from the Portuguese, the Dutch, the British, to the Japanese. Among these powers, the Japanese Occupation was the shortest, though arguably the nastiest. When World War 2 began, the Japanese went on a colonising spree and all the Asian countries under the British colony became a target…including us!

Out of the war, came stories of patriotism and courage, of brave Malayans who fought the Japanese, like Leftenan Adnan, Sybil Kathigasu, Albert Kwok and many others. We’ve even made movies out of it, like Sarjan Hassan directed by P. Ramlee. However, not many people know the story of Platoon 7, volunteer troops under the Malayan Volunteer Infantry (MVI). Most of the guys who made up the platoon were just civilians and government staff from Kuala Kangsar, Perak.

Although you’d think everyone had a bad time during the war, Platoon 7 showed us that even when while the bombs were falling, hilarious and bizarre things can happen. Reading the comical anecdotes feels like we’re watching Hogan’s Heroes or Dad’s Army. 😆 Here are 7 of Platoon 7’s craziest WW2 stories. 1. One soldier went berserk because he hated… duck eggs?!

There are plenty of reasons in life to mogok… phone ringing in the cinema, angmoh insisting rendang must be crispy, corrupt government, etc. But one guy in Platoon 7 was unhappy with the MENU, so he decided to start a food fight in the canteen.

It was the middle of 1941, and the whole army was undergoing their ‘Refresher Training’, including Corporal Wahiduddin. The Malay soldiers were not pleased because they were served duck eggs, whilst the Christians were given chicken eggs. The growing dissatisfaction was egged on by one guy, Private Mohd. Junid. One by one, the soldiers stopped eating them and then they did something uneggspected… they started throwing eggs all over the canteen.

The incident reached the ears of the Battalion Commander and all the individuals who were involved were hauled to the Headquarters. Good thing Major H. J. Cockman was able to convince them to be contented with eating duck eggs, though there were still a few flers grumbling and making complaints.

Finally, the grumbling reached the Duli Yang Maha Mulia Sultan Aziz, the Sultan of Perak, who also happened to be the Battalion’s Honorary Colonel. His Highness then turun padang and gave the soldiers a shelling, including Private Mohd Junid, whom he met face to face. In the end, everything was settled amicably.

2. Two guys were charged in military court for accidentally shooting A BED

Beds? I hate beds! Lemme at ’em. Img from giphy.com

December 1941, the Japanese had advanced into Malaya, and Corporal Wahiduddin has been ordered to station his men at the villages. Platoon 7, under Company B were scattered across the state of Perak. Everyone gathered around, some sad, some happy, as they shared terrifying news about the British defeat, worst of which was news of the sinking of their fearsome battleships, HMS Prince of Wales and HMS Repulse in the waters of Kuantan.

Additionally, rumours that Japanese spies had infiltrated the north of Perak in a matter of days made the soldiers nervous. By then, their sleeping hours became more irregular and they were instructed to keep their uniforms on at all times. If there was but the slightest indication that the enemy was approaching, someone would blow the bugle to awaken the sleepers to be ready for action. The atmosphere was tense.

Where them Japanese at? Img from ilbe.com

One night, the whole barracks was suddenly awakened to gunfire! Private Abu Bakar bin Alang Mohd accidentally released a shot, hitting a soldier’s bed and a water bottle. Good thing Private Mohd Tahir wasn’t on his bed at the time because the bullet went right through the end of the bed all the way up to the headboard.

Next day, both soldiers went to trial in military court for their recklessness. They reasoned that they were disoriented from waking up abruptly. Lucky for them the excuse was accepted and they just got off with a warning to be more careful next time.

3. The time they saw Japanese paratroopers. Turned out to be paper parachutes As the days crawled by, the air got more and more heavy. Rumours were flying around that the Imperial Army was practically at their doorstep and no one knew what to believe. One of it was that Japanese spies were spotted landing on Pantai Remis, a fishing area near where Corporal Wahiduddin and his men were stationed. It was reported that the spies had cut all telephone lines to cut off communication.

One morning, the Simpant Ampat police reported seeing Japanese parachutists landing near the Pasir Panjang area. The distance from where they landed to the Corporal’s camp was a mere 4 miles. Time for action! Immediately, all the soldiers sprang into their vehicles to rush to that spot. After all those days of tense waiting and their nerves in tatters, it was finally going to culminate in a bloody, action-packed battle. 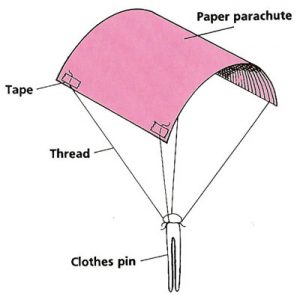 Model of a paper parachute. Img from daviddarling.info

Throughout WW2, people came up with numerous crafty tactics for military deception, though use of decoys in history goes way back when. US General George S. Patton said, “no bastard ever won a war, by dying for his country. He won it, by making the other poor dumb bastard die for his country”.

NAH, BACA:
In WW2, 176 Sabahans were brutally massacred in this park. Here's what happened.

The Japanese too used dummy planes and tanks, even scarecrow soldiers, but our favourite has to be the US’s Ghost Army – officially known as the 23rd Headquarters Special Troops, the 1,100 man unit consisted of make-up artists, actors, sound technicians, painters, photographers and press agents. They used inflatable tanks, fake radio transmissions and sound trucks to stage more than 20 battlefield deceptions. Epic!

4. Sergeant accidentally pulled a grenade pin, someone else had to pick it up Due to the lightning Japanese invasion, the volunteer troops, including Platoon 7, kept retreating. At one point, they fell back and were holed up in Ipoh, then were told to retreat some more, way into the night, without getting any rest. Going backwards was all they could do now. It was during this time when they weren’t doing anything, no fighting, nothing, that Sergeant Lembang instructed his soldiers to check their crates of grenades newly delivered to them.

The men were told to pasang the detonator for each grenade. Nothing weird so far, right? The job was so routine and took long hours, so they started feeling bosan. All of a sudden Sergeant Lembang ter-pull a grenade safety pin! Without hesitation, he hurled it hard and yelled for everyone to take cover.

Couple of moments later, they realised it didn’t explode. But Sergeant Lembang asked Corporal Wahiduddin to go check. The Corporal opened the grenade’s base plug and discovered that the explosive had not been attached yet. Homg.

5. A Private tied his legs to his friend’s and faceplanted

Platoon 7 did met the enemy at last…but the attacks came from the sky. Their camp was being bombed by one squadron of Kamikaze planes after another. The attacks were constant and frightening, the men could hear the bombs falling right beside them and the ground shaking. As a result, the whole of Ipoh town was torn up and very smoky. It was a terrible sight. Wahiduddin wrote in his book at the only time they got relief was on rainy or cloudy days, coz then the Japanese could not carry out an aerial attack. Nevertheless, the people would still hear the hum of aircraft engines in the skies, making everyone perpetually nervous.

One Private Raja Bahari became so traumatised by the plane attacks and the sound of the engines, that at the faintest hum or whir of the propellers from above would send him scuttling into a hole in the ground. He dug the hole to protect himself and would even eat inside it.

One time, as the soldiers lay sleeping, the sound of passing lorries woke them. Instantly, Raja Bahari jumped up and made a beeline for the hole, but he tripped and fell, knocking over somebody.

When his comrades saw why, they roared with laughter. He had apparently tied one of his legs to another Private’s and forgotten about it. To Corporal Wahiduddin, this was his funniest wartime memory, he wrote in his book. 6. The Corporal stopped his buddy from stealing someone’s bicycle

The Malayan soldiers could see that morale among the British troops had dropped drastically, knowing that their chances of winning and defending the country were slim. British soldiers were deserting, hiding in the jungles and villages. Army discipline was gone, and it was every man for himself. It’s no surprise that this caused the morale among Malay soldiers, like Corporal Wahiduddin, to also sink. British soldiers surrendering to the Imperial Army. Img from macaudailytimes.com

Eventually, there was no more real fighting and pretty much all they did was to move the barb wire fence at the station from morning until evening. Other instructions were to destroy houses and buildings around so that they couldn’t be used by the Japanese.

By 31 December 1941, the troops were allowed to balik kampung coz there was no point anymore. Everyone couldn’t wait to leave and in fact, some soldiers had quietly deserted earlier. Raja Wahiduddin was among the men who cabut secretly, as he worried about the fate of his family in Kuala Kangsar. On the 25th (couple of days beforehand) he and 3 Privates were making their way home through the jungles to avoid running into Japanese soldiers.

They were well received by people whenever they stopped at any village to rest, and some folks gave them civilian clothing to change out of their uniforms, so the Japanese wouldn’t know they were soldiers. They passed by a place where there a lot of Chinese workers and came across a bunch of bicycles. Private Man Sadli thought, hey why not steal them and cycle home? But Wahiduddin absolutely opposed the idea and scolded the fler. What the heck, steal people’s bicycles?? NOOO!

Though they went their separate ways after the war, these men will always remember their comradeship

After a few days of travelling, Corporal Raja Wahiduddin arrived safely at his kampung. Months down the line, he met up with his old friends from Platoon 7, and they talked about the rest of the gang who were still in service. Only half the original number remained with the platoon since he had left.

After 31 Dec when they were officially relieved of their duties, the rest who still wanted to serve in the army were allowed to join the British troops in Singapore, the last stronghold in Malaya that also eventually fell to the Japanese in February 1942. Although it has been 76 years, Wahiduddin won’t forget his experience and wrote his memoirs, Pelatun 7, detailing what it was like fighting the Japanese in WW2. Throughout his account, he describes the many brave exploits of the Malayan volunteer troops that received high praise from their British commanding officers.

But even in a time of hardship and war, the strong bond between soldiers and the funny scrapes they get into, are memories that they carried with them all these years. And for us Malaysians today, thanks to memoirs like Pelatun 7, we have a glimpse into both the good and bad days in war.