Growing up, many of us would have had the opportunity to sit at the feet of our grandparents, or great grandparents, and listen as they told stories about their life. Stories of how they used to get by tough seasons in life, or how things have changed over the years, or even about how grandpa met grandma. “As beautiful as the day I married her.” – Some Nicholas Sparks novel. Image from CNN.

Still, no matter how many stories tell us, we only get snippets of their whole life don’t we? We still can’t fully understand their lives unless we actually…relived them.

We don’t actually have any technology that allows for that…yet. But 20th Century Fox’s latest movie actually gives us a glimpse of how that could actually happen one day. Don’t believe us? Well then check out the trailer for Assassin’s Creed.

Cool right? Well just letting you know that it’s out in cinemas 22nd December 2016. And although it’s an action-packed movie about Assassins versus their long time adversaries, the Templars, it’s also rooted in the theory that the memories of our ancestors are actually passed down to us through our DNA.

It would actually be cool to one day be able to relive the lives of our grandparents, great grandparents, or even of that one ancestor that used to serve in the palace of Shih Huang Ti, but until that day, all we have to go on are the stories that have been passed down to us. And since we’re talking about assassins, here are 6 stories of really badass Malaysian ancestors, as told to us by their descendants.

1. The man in a life-or-death battle with a python So back in the day, Aldrin’s grandfather was a farmer who one day after tending to his farm, decided to spend the night in a small cave, with a campfire to keep animals away. But then….

“Suddenly, he felt something wrapping around him. Unfortunately for him, the campfire had died and he was barely able to see anything. But the coldness and the scales reminded him of something. It was a python!” – Aldrin

Immediately his grandfather tried to wiggle himself free, but the python reacted by tightening its grip even more and bit his leg even though pythons are not venomous, almost as if to tell him that there was no way he was getting out of this.

But Aldrin’s grandfather was not ready to die that day. With the one hand that was still free, he grabbed his machete and started hacking at the python until it stopped moving! With his leg still bleeding he then walked a few miles back to his village and eventually passed out from blood loss BUT not before telling his kampung where to get the python. That’s not all, it seems that the python diameter was the same as a 750g milo tin, and big enough everyone in the kampung was able to have a ssssssscrumptious meal.

So one fine day, Nicholas’ grandfather was just outside washing his car and minding his own business when he noticed a guy just chilling suspiciously at a nearby lamp post. Some of us may not even care if we saw something like this, but Nicholas’ grandfather kept watch. And it would all have been fine if chilling was all this guy did, but he started climbing the lamp post and attempted to remove some of the electric cables.

That was when Nicholas’ grandfather sprang into civic-duty action 101.

“My Gramps immediately went over, and instead of confronting him by talking first, he grabbed the mofo by his leg, pulled him down and gave him some nice beating before tying him up with some raffia string.” – Nicholas How we imagine Nicholas’ grandfather in action.

The cops eventually came and took the guy away, but the story didn’t end there. TNB was so grateful for what Nicholas’ grandfather did that they didn’t just thank him, they gave him a sijil penghargaan! Nicholas himself seemed really proud of his grandfather and even referred to what he did as “being a total Batman”.

3. The man who hated the Japanese so much, he sold them fruits dipped in his pee

WARNING: If you’re eating something right now or are easily grossed out in general, you might wanna skip this.

If you have grandparents who lived through World War 2, you may have had a glimpse of their undying hatred for the Japanese, and it’s hard to blame them for it seeing as to how the Japanese committed terrible atrocities back then.

For Jason River’s grandfather, he didn’t just hate them, he got even. He had somehow been able to obtain from the Japanese government a permit to sell fruits, but because everyone at the time was so poor, only the Japanese themselves (or some Chinese families working with the Japs) were able to afford the fruits he sold. And this allowed him a certain opportunity not afforded to many people at the time.

“He will make sure all his fruits were dipped in his own urine before they are sold. The funny part is, his business at that time was quite good and he could still earn enough to feed his family.” – Jason River

Perhaps that’s where the witch from Snow White got the inspiration from. Just imagine it to be more….yellow… Image from giphy.com

But that’s not all, Jason adds that one time his grandfather even added dog poop to his “special dip”, and takes credit for it causing massive diarrhea in one of the Japanese camps.

“He is so proud of his achievement until you can see the blink in his eyes when he tells me this story.” – Jason River

NAH, BACA:
Msians are rushing to check if they have unclaimed money with the gomen. Here's how to check yours

4. The woman who chased away a herd of babi hutans with a broom

Nowadays when we hear the word “babi hutan” it’s usually from our friends trying to equate us to a wild, dirty, untamed animal. But back in the day, it seems that the babi hutan was actually a problem that people faced.

Kimie tells a story of how one time his grandmother heard a sounder of boars (yes, a group of boars is called a sounder. we didn’t know that too) rampaging her lawn in the middle of night. Now if you heard that there were a few wild boars in your garden, you’d probably scream for help. But not this woman. Wearing her “kain batik kemban”, and armed with a penyapu lidi and Eveready torchlight, she charged out as if going to war with the foul beasts.

“She shouted so loud it woke all of us up and most of the neighbors as well. And she succeeded (in chasing the boars away). But few minutes later, a boar came back for revenge and she ended up with stitches on her thigh as they fought violently which of course, she won.” – Kimie She chased that boar back into the bushes with its tail in between its boary legs. And when it was all said and done, Kimie grandmother threw her penyapu lidi onto the roof let out such a huge victory cry that 6-7 houses nearby turned on their lights to see what was happening.

5. The man who saved a woman from gangsters so he could marry her

Azlin’s great grandfather was no ordinary man. Although he was a mata-mata gelap (spy) in Penang, he had a hot temper. His temper eventually caught up with him when he ended up punching officer, and had to flee to legendary state of Perlis (because seriously, how many of you actually know someone from Perlis?).

Meanwhile, Azlin’s great grandmother was the daughter of a paddy farmer who was also a “canggung” dancer. The Thai influence was strong in Perlis (since canggung also apparently means “dancer” in the Thai language). And one day, tragedy struck.

“She was kidnapped one day by some sort of Siam/Thai gangster.” – Azlin

Fearing for her life, and perhaps at his wits end at how to save her, her father announced that whomsoever was able to save his daughter, he would allow that person to marry her. Enter Azlin’s great grandfather. Armed with his skills as an exiled spy, he set off to save her.

“I’m sure you know where this is going. He rescued and married her. Thanks to them, I am here.” – Azlin “Don’t worry, I’ll protect you.” – Every action anime ever. Image from naruto.wikia.com

6. The man who wanted to save his friends so much, he called upon the aid of wasps

Back during World War 2, the Japanese really had a thing against the Chinese, but not so much the indigenous people. But what happens if your friends are Chinese and you wanna save them? Well Rayner John’s grandfather had Chinese friends and to protect them, he hid them in his farm house.

However, one fine day the Japs decided to do spot-check at his farm where he was hiding his Chinese friends. Was this the end of his friends? Not if he could do something about it!

In a desperate attempt to save his buddy, he punched a venomous wasp nest, got stung in the face but managed to make the Japanese run for their lives. The stung left big red mark on his left temple and he always tell the stories whenever we have family gatherings to annoy my grandmother who has heard the story a million times. – Rayner John Original image of wasps from telegraph.co.uk

But wait, where did the wasp nest come from? Well Rayner tells us that wasps like to build their nests in the roofs of farmhouses even until today. So while they’re usually considered pests, it seems that it is kinda useful to have them around, especially when you wanna chase people away. And we know it works because if the Japs came back, there wouldn’t be a Rayner to tell the story right? 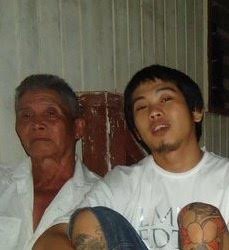 Rayner and his grandfather. Picture courtesy of Rayner John.

Seriously, can you imagine punching a wasp nest or fighting some babi hutans with a broomstick? Some of these stories really are quite bizarre that you’d have a hard time believing them. But then again, they lived in such different eras from ours that maybe what is bizarre to us is actually normal to them (the same way they would probably find smartphones bizarre, but are completely normal to us). And just from the stories of a few grandparents, and a few great grandparents, we already got so many badass stories. So imagine just how much more badass stuff we can find if we could actually relive the lives of our ancestors!

Still, we’ve established we still don’t have the technology to relive the lives of our ancestors, so for the time being, perhaps another movie about badass assassin ancestors would suffice eh?