Traditionally, Malaysia is known to be friends with pretty much everyone (except Israel, of course). It’s actually a huge part of our foreign policy to help allies out when needed, and to leave them alone otherwise:

“Malaysia’s conduct will continue to be guided by the principles of respect for independence, sovereignty, territorial integrity and non-interference in the affairs of other nations, peaceful settlement of disputes, peaceful co-existence and mutual benefit in relations.” – Malaysia’s foreign policy, Ministry of Foreign Affairs Malaysia 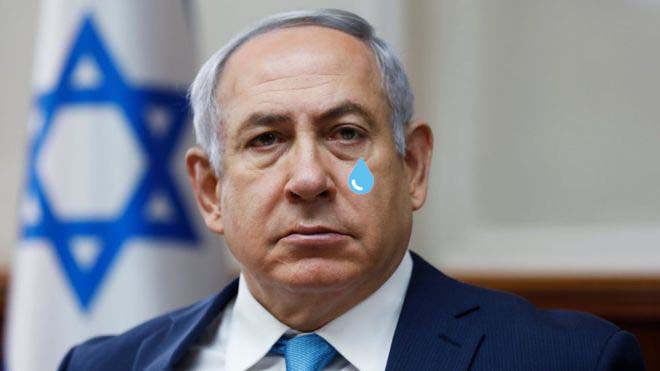 Q: What did Israel say after Dr. M didn’t invite them to dinner?
A: Bo-jew. Unedited image from: BBC News

True, Malaysia has had her disputes and disagreements with certain nations regarding policies and/or rhetoric, but more often than not this doesn’t stop our PM from meeting them and being all buddy-buddy like nothing happened. Y’know, cos diplomacy.

But it is interesting to analyse circumstances surrounding meetings between Tun and other world leaders, especially after they’ve done something to cheese us off, or vice versa; it appears that there are times when even our straight-talking PM has to compromise. Being the curious sentient cilisos bottles that we are, we decided to take a look at all the times where Tun M had what could only be described as an awkward meeting with his friends from abroad, starting with…

Topping the list is Asean’s favourite strongman Rodrigo Duterte. The Filipino chap paints a colourful character, from his ruthless war on drugs, to his bizarre comments (we especially liked the one about the jet ski, Mr. Duterte). But perhaps (to Malaysians anyway) his most serious statement was made regarding the sovereignty of one of Malaysia’s states, Sabah, back in 2016:

“What has been the policy will always be the policy of the government, especially those for the interest of the country. We have to stake our claim (on Sabah).” – Rodrigo Duterte, 2016

His justification for this claim is that apparently Sabah was only ‘leased’ and not ceded to the British North Borneo Company, who then gave it back to the British government after they ceased trade in the region. FYI, this was also the reason the Sulu Sultanate tried a Che Guevara-style takeover back in 2013. And obviously we didn’t take it too well: then-PM Najib Razak responded by vowing to defend Sabah’s sovereignty, while our Ministry of Foreign Affairs stressed that Sabah was recognised as a part of Malaysia by both the UN and the international community since 1963. Duterte was said to even have been prepared to bring it up with Najib during the pair’s meeting later that year, though he later U-turned on that decision.

However, when Dr. M went to Manila for a summit meeting with Duterte in March of this year, he decided to take the path of least resistance by simply brushing the issue aside: And sure enough, the meeting went off without a hitch nor any Sabah discussions, with the duo choosing instead to focus on matters such as tourism, terrorism, trade, and investment. Surely that was the end of the Sabah claims, right?

Wrong. Duterte’s foreign secretary appeared to not have received the memo, after he made yet another Sabah claim a few days ago:

“We shall never have an embassy in Sabah. To even think of it is an act of treason… As to the West Philippine Sea, we are careful not to make any act that can be interpreted as an abandonment of our Sabah claim.” – Teodoro Locsin Jr., Phillipines Foreign Secretary

… to which our foreign ministry (surely rolling their eyes by now) responded by labelling the claims ‘unfriendly and harmful.’ Whelp, guess some leopards never change their spots, huh?

It’s quite established that Malaysia and India have been close BFFs even before Tun and Modi won their respective elections; prior to their most recent meeting earlier this month, our heads of state have met 4 times in the last 4 years. Dr. M and Modi during their most recent meeting at the Eastern Economic Forum in Russia. Image from: Gulf News

However, many (including us) were curious to see how the 2019 meeting would turn out after Dr. Zakir Naik became the subject of huge controversy in Malaysia, thanks to ‘those’ comments he made during his speeches here. As many of y’all already know, Dr. Zakir Naik is wanted by Modi’s government for money laundering charges, and is currently taking refuge in Malaysia. India has called for his extradition, but as we all know, so far no go.

Following the meeting, India’s Foreign Secretary Vijay Gokhale said that the focus had been on terrorism, and, more importantly, that Modi not only raised the issue of Dr. Zakir Naik’s extradition, but also that Dr. M had ‘responded positively’ to it. 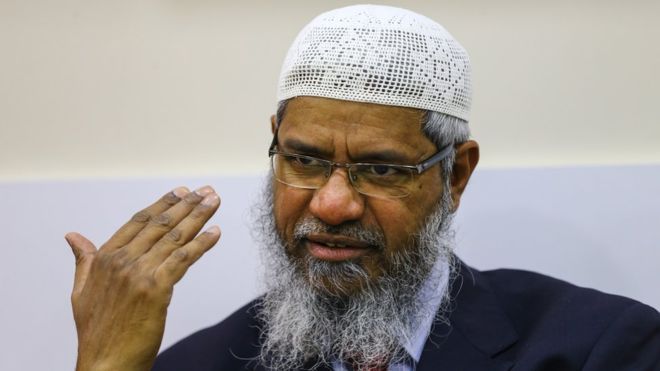 Strangely enough, Dr. M later denied that Modi had made any mention of extradition, and that he had only mentioned Dr. Zakir’s name ‘in passing’; in conflict with pretty much every other report on the event!

Why? Don’t ask us; we don’t know. In any case, bilateral relations between us seem as strong as ever, as can be seen with this cute little tweet from Modi (in Malay, no less):

Alright, Winnie the Pooh jokes aside, we’ve had generally excellent relations with the largest country in Asia (probably a good thing). In fact, Dr. M was actually the first world leader to condemn Donald Trump’s Huawei ban in the US, to which China responded by saying that we would be ‘friends forever’. 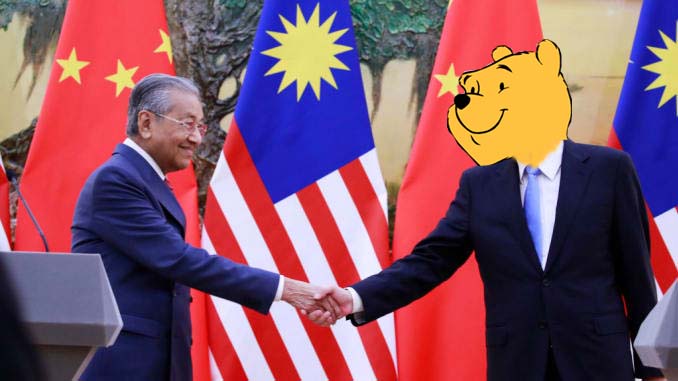 However, even brothers fight, and we are no exception: in the past, they’ve tried to kacau our claim on the Spratly Islands with their own ‘nine-dash line’ claim. Things got really heated in 2018, when China (having already had several of their projects cancelled by Dr. M) demanded the extradition of 11 Uighurs who had escaped to Malaysia, Dr. M straight up rejected them, and instead flew them to Turkey. Needless to say, the move infuriated Beijing.

But when Dr. M met with Xi Jinping earlier this year, Dr. M instead chose to focus on the Belt and Road Initiative (BRI), and the entire Uighur/Spratlys spats seemed to have been totally forgotten:

“Malaysia and China have always been very close since many centuries ago.” – Tun Dr. Mahathir

“Our bilateral relations is at a new starting chapter.” – Xi Jinping Tun and Xi, shortly before returning to the 100 Acre Wood for a pot of honey. Image from: China Daily

Interestingly enough, Malaysia failed to join 22 other countries’ signing of a letter to a U.N. High Commissioner for Human Rights condemning China’s mass detention of Uyghurs, saying that he needed more information before passing judgment:

“At the moment we need to verify certain things of what they are accused of. Of course they deny… We believe that the approach should not be confrontational. It should be through negotiation and exposure of what is actually happening in China.” – Tun Dr. Mahathir *Click here to play the national anthem of the Russian Federation* Image from: WBAA

Russia’s President needs no introduction, really. However, he does share a couple things in common with our own Prime Minister: both men have been elected head of state more than once, and both are extremely outspoken towards the West. It’s probably no surprise then, that Putin holds Dr. Mahathir ‘in very high esteem’, as said by Putin’s special aide Dr. Victor Kladov:

“I can confide in you this (based on) the body language and numerous meetings between the two leaders.” – Dr. Victor Kladov

However, while on the surface we appear to be fine, Putin ruffled a few Malaysian feathers after something he did (or rather, failed to do) following the MH17 tragedy: a Malaysia-backed UN Resolution to launch an international tribunal was vetoed by Russia, thus making them the only UN nation to oppose it. The reason? In Mr. Putin’s own words, such a move would be ‘premature’ and ‘counter-productive’.

Obviously, added to the fact that the missile that downed the plane was Russian-made, this would raise lotsa red flags among the international community, and for many, it appeared as though Russia was covering its tracks. Interestingly, Dr. M has emerged as one of Putin’s staunchest defenders. During the pair’s recent meeting in Russia, he even went so far as to say that Putin and Russia were being used as a scapegoat for the attack:

“Even before they examine, they already said Russia. And now they said they have proof. It is very difficult for us to accept that.” – Tun Dr. Mahathir

However, Dr. M and Putin were not deterred, and their recent meeting was anything but unproductive: Dr. M is considering Russia’s offer to renew Malaysia’s ageing MiG fleet with new MiG-35s, and he’s also welcomed the idea of Russia setting up an aerospace university in Malaysia. It appears as if, on the government level at least, Malaysia-Russia ties have never been stronger.

*Bonus: Check out this old video of Russians in Russia speaking fluent Malay!*

5) The one that never happened: Donald Trump, President of the United States

Malaysia has always traditionally had good relations with the good ol’ US of A; in his previous stint as Prime Minister, Dr. M met with every single President of the US, from Reagan all the way to Bush, Jr. Dr. M and President Reagan in 1984. Image from: Bloomberg

Despite Mr. Trump congratulating Dr. M on his election victory, the feeling is not mutual. Dr. M has been very vocal on his dislike of Donald Trump, calling him an ‘international bully’ and saying that he doesn’t plan on meeting The Donald anytime soon:

“I don’t know how I can deal with a person who is so much like a chameleon.” – Tun Dr. Mahathir

“There are many leaders in the world, but I don’t think I am worse than Trump.” – Tun Dr. Mahathir

This is in stark contrast to his predecessor Najib Razak, whom Trump called ‘his favourite Prime Minister‘ after the former’s visit to the White House in 2017. Tun-Senpai failed to notice The Donald. Image from: Reuters

While the White House said last year that it was working on Mr. Trump’s visit to Malaysia, so far the pair have still not met, and there has been no indication that they will in the near future.

No matter how world leaders feel about each other, diplomacy usually has to come first Yes, we also can’t believe we spent time to make this.

No one actually knows what actually goes through politicians’ heads during these meetings, but as Game of Thrones has shown us, it’s entirely possible that there could be more to these meetings than meets the eye. Whatever misgivings they might have (if any), they definitely don’t show it at these meetings because of diplomacy, or, as we say in Malay, ‘jaga hati kawan’:

“Every time we deal with an enemy, we create two more.” – Tyrion Lannister, ‘Game of Thrones’ Whether totally genuine or not, these exchanges can show us what leaders are willing to compromise on or ignore in favour of maintaining good relations and economic stability. On that note, sorry, Mr. Trump, you must just be too much for even Dr. M to handle!

Share this article:
NAH, BACA:
Syria is so war-torn that they're playing for the World Cup... in MALAYSIA?!