If you’ve been living your life long enough to be turned down by a girl/guy, you’ll know this major rule in life: how you make an impression matters… especially the first one!

It makes or breaks whatever you do, be it trying to make your GF’s dad to like you, getting past a roadblock, or even scoring a job with a salary you want.

So… how *do* you make a good impression of yourself and get what you want out of it?

British Council is here to teach you how to make yourself look GOOD (to unis at least)! Righto! Our friends at British Council wanna help Malaysians who might not always present themselves in the best way… which is probably hardest for those trying to get a spot in the universities of their dreams. Cos y’know… it’s the first time you need to interview for something important.

Unfortunately, the last time you wrote about yourself would most likely be in kindergarten, so this may probably be a bit strange. Where do you start? Is this too much, is this too little? Do I sound like everyone else? Do I start with “Dear” or “Hello”??!!

To help this along, the British Council has TWO seminars to help you along. For the first, they got a Uni Counselor from Oxford International College to give “10 Tips to the Top Universities“. The speaker, Frank Hardee, runs the Oxford Summer Academy, which gives high-school students a taste of what its like to study there, and perhaps recruit the best of them, so you can be sure he knows the right moves. The second talk, “Crossing the Oxbridge Interview“, is for the more ambitious, for those who wanna get into Oxford or Cambridge Universities. The speaker, Robert Whitehouse, is from Abbey colleges, where 10% of their students actually get admitted to Oxbridge (fwa), so he definitely knows the right moves.

These talks are just two of many super-interesting talks at the British Council Education UK 2018 Exhibition going on at KL Convention Center this 3rd to 4th March 2018, and in Penang’s Hotel Jen on 10th March! Check out the full list on their FB page here, or better still pre-register here to win a trip… to LONDON!

In the meantime, check out how 7 Malaysian job managers/hirers had their impressions completely ruined by… err… questionable applicants and how they could’ve improved:

1. The guy who kept his certificates in his… POCKETS?! “What do you mean I need a bag?” Unedited image from YouTube user ehowbeauty.

How many of you meticulously keep all your important documents? Birth cert, marriage cert, diplomas, degrees… heck, education doesn’t come cheap in Malaysia so all the more reason to keep it clean as a whistle. So when Kaviarasan was looking for a new Maintenance Foreman, imagine his shock when the applicant kept his certs in HIS PANTS.

“Mr. Fold-My-Cert came in with his shirt untucked, wrinkled. He wore slippers! There goes my first impression.

Then when we asked for his certificates, he took them out from his back pocket. They all came out wrinkled and dirty. Best part is, some actually looked forged!” – Kaviarasan

The applicant was also introduced through his boss’ friend, so they were equal parts awkward and disappointed. As for the interview itself, the applicant was busy hard-selling his technical skills (which Kaviarasan said he lacked anyway). No wonder he left without an offer letter in his pocket.

How to improve: In the real world, first impressions are more important that you’d think, so always put in extra effort to look, sound, and behave your best! “Wear proper clothing for your interviews, and don’t try to kelentong,” Kaviarasan says. “Interviewers know when they’re being conned….”

2. The Marketing Manager who wouldn’t give ‘free advice’ Celebrity chef Isadora Chai once received a cold call from someone who wanted a ‘marketing position’. But you’d think that if someone were to be bold enough to do that, that same someone would know the job and business inside out… right? But Isadora tells us, “She had no clue who I was and what restaurants I had!”

“I asked her to do research and come back to me next week to come up with a marketing plan on how she thinks she could add value to the company.

Then she said that she does not give free advice.” – Isadora

If you didn’t know, Isadora’s a chef but she has a degree in marketing, so… err… dear applicant, she probably didn’t need your ‘advice’ leh. :-/

How to improve: Requesting potential employees for ‘homework’ isn’t an odd thing in the marketplace – it lets the employer gauge your thinking skills and experience. A clearly annoyed Isadora says, “Go work in some bullsh*t company who will swallow your marketing mambo jumbo.” Err… we’d say just seize the opportunity to showcase what you’ve got?

3. The one who came with his mother but signed with his girlfriend’s father’s name (Hah??!!)

And make sure he gets paid for OT too!

Diana was helping out with her sister’s startup, and had to look for someone to fill a Sales Representative position. Within a week, they had received a lot of resumes. One guy seemed promising so he was called in for an interview. Imagine her shock when HE CAME IN WITH HIS MOTHER! (Ed’s note: Is it a bad thing that we had so many entries of candidates coming with their mothers? Yes. Yes it is.)

It also seems that the candidate didn’t interact with others and didn’t speak much. But even more shocking was his resume…

“I can’t remember what else was in the resume apart from him mentioning several times, that his girlfriend is a daughter of a datuk!

At the end of the paper, right after his name and signature, was the signature of said Datuk as his referee, signed by a Datuk Anon Ymous, with the words “Girlfriend’s father” under it.” – Diana

How to improve: Parents can be quite meddlesome sometimes, especially for millennials where 8% of recent college grads went for interviews with their parents tagging along! Parents, please, STAHP! But even more importantly is this: “As an employer, we are looking for someone who has the capability to do a job, not because someone is someone’s potential son-in-law to a Datuk,” Diana says. “The position of your family members, relative or friends, even if they were Bill Gates does not interest us at all.”

4. The one who was unintentionally hamsap 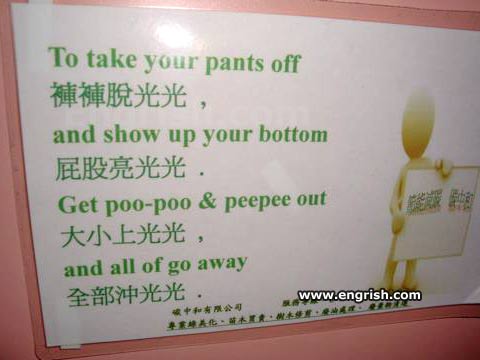 We all know that language skills are super important, and ya laa, we realise that it’s a bit ironic coming from CILISOS. We’ve heard over and over again the perils of having weak English, we promise you you’ll love this one.

NAH, BACA:
From poop parasites to durian-sized tumours... 5 realities of working in a Msian hospital lab

Here’s what happened when Chong was looking for someone to fill a Manufacturing Manager position.

How to improve: We’d tell you to listen and practice, but Wong says otherwise: “Don’t. You make the world a better place by being the constant source of laughter.”

5. The one who added his primary school ‘pertandingan pantun’ in his CV “FML.. am I supposed to read all this?!” Unedited image from blogs.frenchpod101.com

Ever thought about what to put into your CV? You won gold leading your school’s choir when you were 12, that’s gotta count as something… right? Nope.

Shahir was looking for an Entry-Level Executive, but he was completely turned off by a CV that was 5-pages long.

“It contained so much unnecessary information, such as…

all the subjects during diploma and degree,

Shahir printed out the CV and showed it to his interns, telling them never to do anything like this. (And not to put him as their referee too, for reasons we don’t know why hur hur.) Well the applicant didn’t get shortlisted for the interview, but to be fair, it was also because his background didn’t meet Shahir’s requirement la.

How to improve: Walao! See why our sponsors had to do a talk to teach people how to write about themselves? A CV is your first foot at the doorstep of your career, so if you screw that up, you gon get the door slammed on your face! Always remember to ‘K.I.S.S’ – ‘Keep It Short & Simple’ – especially when it comes to getting information across fast. But hey we’re not the best at this too since our articles are gila panjang… let the experts in British Council teach you this coming Saturday. 🙂

6. The guy who was stingy with words, but generous in arrogance No matter how antisocial or introverted you are, you *may* wanna force yourself out of your shell when you’re trying to find a job. Nobody likes talking to walls, unless you’re a squash player la.

Noorazlina was looking for someone to fill in a Data Collection position and found someone who seemed pretty promising. But during the interview, he barely spoke anything – the maximum word count per sentence was FOUR!

“Tell me about yourself,” Noorlina asked.

“What you want to know?” he replied.

“Tell me about your studies, work experience, anything…”

“…. do you know anything about the job?”

By then Noorazlina has had enough so she ended the interview. Little did she know her eyes would roll like never before.

“I then told him that it was nice to meet him, but the job wasn’t suitable for him.

He then stood up, took his bag and said, “Damn rude.”

7. The one who sent his friend to the interview pretending to be him?!! One day, Min Aik and his boss called an IT Engineer candidate for an interview. But on that day itself, the candidate wasn’t able to make it and he didn’t inform Min Aik about it. But instead of doing the logical thing of postponing…

“Instead of cancelling or postponing the appointment, he requested a good friend of his to attend the interview on his behalf.

Throughout the course of the interview, he never mentioned that he came on behalf of a friend, and he spoke as if he was the candidate himself!” – Min Aik

The ‘pretend’ candidate spoke with a lot of passion, had good communication skills, and actually seemed to be the ideal candidate. And the best part is, Min Aik’s boss decided to hire HIM! All these while still thinking that he was the original job applicant, of course. And that was only the buffer until D-Day came…

“On the first day of work, somebody else walked in through the door. And we asked “Who are you?”.. then the entire story unfolded. We were stunned with his explanation, and he was shown the door immediately.”

How to improve: It’s ridiculous that we have to spell out common sense and basic etiquette. Min Aik says, “If you can’t make it, just inform the prospective employer! Never get someone to attend the interview on your behalf!”

Walao! Why these fellas so char one?! Congrats, you win in life! Photo from wykop.pl

We’ve never facepalmed as hard as we did when we sifted through all our entries. But seriously tho… try too hard and you’ll turn people off. Try to be chill and people don’t take you seriously. First impressions are obviously more important than anything, because if you screw that up, how on earth are you gonna showcase your abilities?

That’s why it’s so important to know how to present yourself in a way that will get you what you want. Granted, there are many aspects to what ‘wows’ a person, but why not start at the most basic of it all?

So don’t be paiseh, even if you’re not a student there are two great talks this weekend about how best to present yourself. After all, you wouldn’t wanna read about yourself here next time 🙁