[This article was originally published on 7th August 2014. Updated on 1st October 2015 by Jo-Lyn] Yep, that’s balloon girl Bilqis Hijjas. So here’s a refresher on her ‘crime’.

On 31 Aug (one day after Bersih 4 rally), PM Datuk Seri Najib Razak and Datin Seri Rosmah were officiating an event in Pavilion Mall, KL. From the top floor, Bilqis dropped 7 yellow balloons with the words “Free media”, “Democracy” and “Justice”, among others. Nope, the balloons were not filled with stones, paint, or water. And they didn’t fall on the PM and his wife were sitting (it fell behind the stage)… yet, it opened up a whole controversy now known as Balloongate. So what’s gonna happen to balloon girl? Her case has already been heard in court with Michelle Yesudas from Laywers for Liberty (and CILISOS’ friend, chehwah) as her lawyer. Bilqis was charged with “insulting behaviour” under Section 14 of the Minor Offences Act 1955, which carries a maximum fine of RM100! Okla… not too bad. At least duneed to go Jinjang. But wait…

OMG who knew you could get punished for dropping balloons!!? Turns out this Section 14 Act (we don’t mean Jaya One) got damn alot of funny-funny rules (seriously, you won’t believe what you can’t do in Malaysia). So we thought we’d look through some acts and laws and stuff to see what other weird ‘crimes’ you can get charged for.

Note: This article will not be covering sedition, sodomy or unauthorised printing of Quranic verses: due to recent high profile cases, most people probably already know you can be charged for them!

Also, we at Cilisos are aware that some of the acts listed below are technically classified as ‘offences’ instead of ‘crimes’. The difference between the two is complex, but basically, crimes are governed by the Malaysian Penal Code, while offences are not. We went with ‘crimes’ in our headline, however, for catchiness and convenience. So any real lawyers reading this…don’t sue! 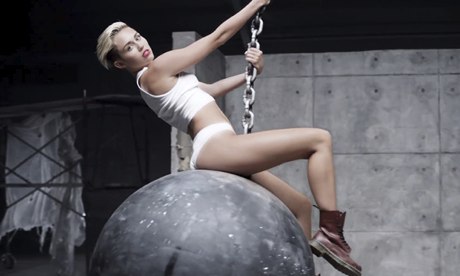 The construction industry has certainly come a long way. Image from www.theguardian.com

Do you suddenly feel like bursting into Tom Jones’s ‘Sex Bomb’ while walking down the street? Flo Rida’s ‘Whistle’? Boyz II Men’s ‘I Will Make Love To You’? Sir Mix-A-Lot’s ‘I Like Big Butts’? Be careful. Your singing could cause a lot more than ruptured eardrums or a sudden case of rain. According to section 294 of the Penal Code:

Hoo boy. What exactly makes a song obscene? The Act is rather silent. Direct vulgarities would probably be clear cut, but what about innuendo? Moaning or grinding noises? If a man had an asthma attack while singing a Taylor Swift song, would the heavy breathing be enough to send him to jail? So far, we’ve not been able to find a case where this law was invoked, which is probably for the better. All the same, we’d be careful about singing the old nursery rhyme Wee Willie Winkie or the Beatles’ Come Together in public.

Speaking of which Wee, We’re surprised that as far as we know (Google), Namewee has never been charged under this law.

If there’s any song that would definitely be caught by this law, it would probably be this dance anthem by Swedish musician/pornstache king Gunther: Good luck getting that tune out of your head.

2. Riding an elephant down the street I’d post more info on this offence here, but it would be irrelevant. Or should we say..irrelephant? Image from pixabay.com.

Good Lord. We really wonder how things must have been in 1950s Malaya that they felt the need to draft a specific law for elephant riding. Were jumbo parades the big thing then or something?

If anything, we feel the person who suffered most for this offence would be the Chief Police Officer. Imagine having to interrupt a tense murder investigation or a complex doughnut purchase just because some nutcase wanted to suddenly film Dumbo 2: Step Up to the Streets. That probably wouldn’t be good for his blood pressure.

And the punishment for this offence? A fine not exceeding the sum of fifty ringgit. Look, we’re not exactly legal authorities here, but we’re thinking if you can afford to buy an elephant and bring it all to the way to town (to say nothing of feeding and caring for it) you can probably afford RM50?

We note, also, that while sections 11 (a) and (b) cover a wide variety of animals, they are silent on camels, ostriches, lions, rhinos or alligators. So if you’ve ever wanted to ride Tarzan style down the Federal Highway…well, you didn’t get the idea from us, okay?

3. Bathing yourself (or your dog!) in public illegally 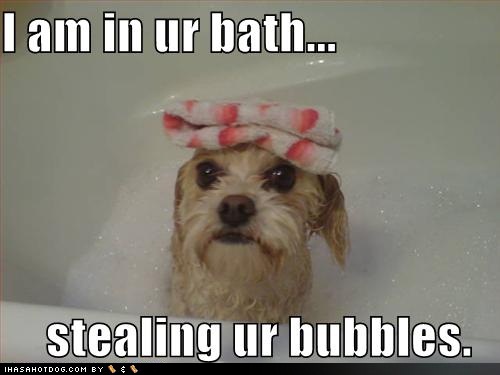 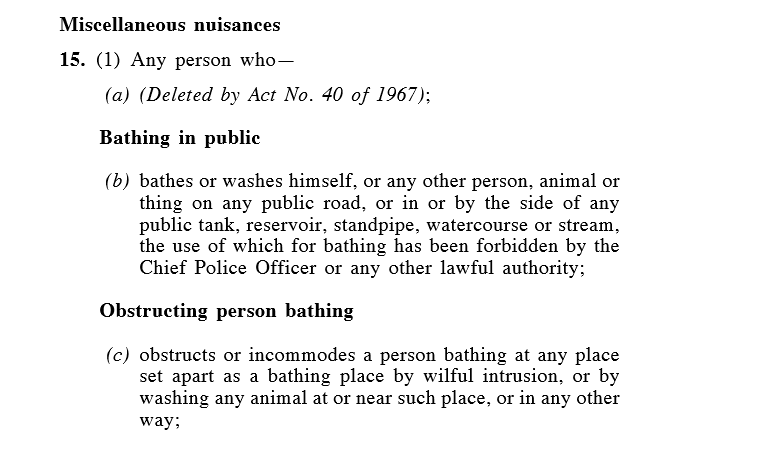 Again, we wonder the circumstances that led to us not just having an offence for public bathing, but also an offence PREVENTING someone from bathing as well. Old time bathing was serious business! According to the Act, committing any of these offences will make you liable for a fine of up to RM100. Which is insane! I mean, you could ride an elephant up the street twice for that kind of money! You read the sign, folks. Image via WikiMedia Commons.

Right below the charge for bathing, we discover a fascinating rule: 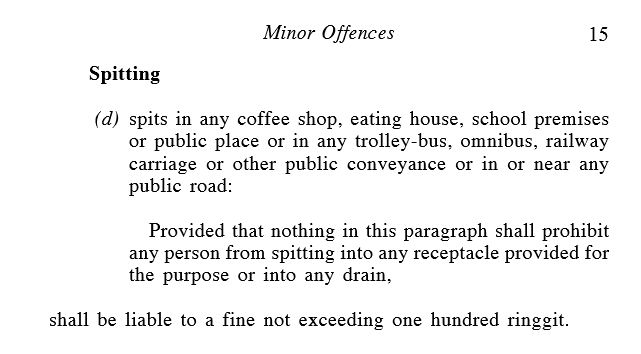 Honestly, we wish this statute was enforced more often! Spitting is a really unsightly habit, after all, and really turns people off. Do also note though, that the Act allows an exception for people to spit in drains. Which we suppose is alright?

Those found liable under this Act may be liable to a fine of RM100. Which, for spitting, we suppose is tough enough. Our neighbour Singapore, however, ever in the kiasu spirit, decided to one up us recently, fining a perennial spitter S$800 (RM2047.55) and jailing him for five weeks!

Damnit Singapore! We’d scoff at you and spit in your eye, but that would get us arrested. Speaking of which… Mr. Eastwood, you know where to come for your next holiday k? Sing it with me now! Ten orange beakers..standing on the wall..Hopefully its not an obscene song. Image via Fotopedia.com

Did you know that we had an Indecent Advertisements Act 1953? I certainly didn’t! The Act, however, only covers advertisements pertaining to the treatment of venereal disease.

According to section 5 of the Act, these advertisements are considered indecent and not allowed to be published. Ouch. You’d think providing aid to the poor people suffering these diseases would be the priority: apparently, maintaining public standards of decency was more important when the Act was drafted.

Note too, that according to section 1, this Act only applies in West Malaysia. (The same goes for all offences under the Minor Offences Act). So if you’re the head of the Sabah and Sarawak Syphilis Solvent Solutions Symposium (SSSSS) go right ahead!*

*Note: we are not liable if you end up arrested under a different law or charged for a different offence. What are you doing taking legal advice from us anyway?

6. Throwing a ring into a river Hopefully this article gets page views, because..they are Precious to us. Yessss. Precious. Image via Wikimedia Commons.

One of the offences covered by Malaysia’s rather comprehensive criminal law code, the Penal Code, is mischief. Contrary to its name, it is more than just ringing doorbells and running away: rather, it covers a wide variety of crimes, much involving damage.

The Penal Code also provides a list of helpful examples to illustrate the idea of mischief, such as:

We understand (a), but are struck by how SPECIFIC (b) and (c) are. How many icehouses are there in Malaysia, anyway? The only one we can think of is Snow Walk @ i-City, Shah Alam, which happens to be right next to a giant waterpark. Oh dear. We smell a giant lawsuit waiting to happen any minute.

Also, we at CILISOS also do not condone throwing rings into rivers at any time, unless of course said rings turn you invisible and make you see giant flaming eyes.

Well, this article suddenly became dark all of a sudden, didn’t it? Image via WikiMedia Commons

Not everyone knows this, but people who try to take their own lives in this country can be sent to prison if they survive their attempts. According to section 309 of the Penal Code:

Hang on, you scoff. This sounds like an old fashioned, harsh law. Surely they don’t still charge people for this now, do they? Sadly, they do. The case of PP v. VELLERTORE PONNUSAMY [2011] 7 CLJ 518 records an accused person pleading guilty to a charge of attempted suicide, and the writer of this article actually attended a court session two years ago where a foreign student was sentenced to two months jail.

According to Malaysian Bar Council sources, it is not a crime if a person is caught at the preparatory stage of suicide (for example, if someone is caught after writing a suicide note or in the midst of tying a noose to hang himself). However, if he is already hanging on a noose but the rope snaps and he is caught alive, it is considered an offence under Section 309.

In 2012, the Malaysia Law Reform Committee announced they were reviewing this law, recognizing that it was “a product of the British colonial era”. No news on further developments have been announced since then.

We hope, however, that something is done about this soon. People who attempt suicide need love, understanding and treatment: the last thing they need is further suffering.

SO WHAT HAVE WE LEARNT FROM ALL THIS?

a) The law is wide and complicated: its no wonder most people go through years of tuition and oceans of coffee just to understand a fraction of it all. There are laws out there for practically everything under the sky, and over it too: we are currently drafting a Malaysia Outer Space Act!

b) Some of these laws, however, may have gone out of date, and we hope they change them soon. Judges, academics, Parliamentarians reading this article: shouldn’t you get to work?

c) The more you know about the law, the better. While you probably will not be arrested for some of these crimes any time soon (unless you are supernaturally unlucky) it is still wise to know as much as you can about the rules that govern the country.

So get informed on your legal rights. Knowing the law will be really useful if you ever get into a tight spot someday. And even if you don’t, hey, you can enjoy stuff like Legally Blonde or Suits on a whole new level!

Special thanks to Wilson Tay for help with this article. WE WANT YOU! TO STUDY LAW. Image from imdb.com