Well, it looks like the lawsuit circus is in town, guys. The latest dramas this month are Najib (AGAIN) suing Sydney Morning Herald and The Age… we said The Age ya, not The Edge (don’t sue us!).

Next we have the Sarawak Report suing the Urban Wellbeing, Housing and Local Government Minister Rahman Dahlan for criminal libel. Rahman accused them of publishing lies and even called Clare Rewcastle Brown “scum”. We can understand how Clare would be angry, especially the uncalled for name-calling, but wow, to sue a minister? Sounds like a ballsy move!

But Tony Pua will be the one taking it to the next level if he decides to sue Putrajaya! He was considering suing the whole federal gomen for barring him from exiting the country. Remember when he was stopped by Immigration from flying out to Yogyakarta, Indonesia without a valid reason?

“I am shocked because I was not informed before today, and I’ve not been called up for any investigations with regard to anything that could prevent me from leaving. This is a clear abuse of power.” – Tony Pua

Come to think of it, has anyone sued the Government before? Who would be crazy enough to go up against someone who might have access to all the resources (think money and kickass lawyers), like the Malaysian Government? Did it end well for them or they kantoi teruk-teruk?

Those of you who picked the first 2 answers, have we got a story for you! People have sued the Government before. It’s not impossible despite whatever odds there might appear to be. In fact, CILISOS once wrote about how Teoh Beng Hock’s family sued the Government and won RM600,000 in compensation.

So here are 8 other times people sued the Government.

1. Karpal Singh and carpenter on death row sue gomen to SAVE his life Karpal standing outside the Privy Council in London. Photo from Tim Donoghue’s biography on Karpal

This case where Karpal Singh SAVED a man’s life is known as one of his most celebrated. In 1977, Teh Cheng Poh (a carpenter from Penang), held up a liquor store with a gun. He was charged under the Essential (Security Cases) Regulations (ESCAR)… a law that’s by nature waaay harsher than the usual Criminal Procedure Code. Think DEATH penalty harsher!

Karpal represented Cheng Poh to sue the Federal Government on grounds that springing ESCAR on him was unconstitutional because it was a law set by the Agong after Parliament already sat. When they failed at every court level in Malaysia, Karpal went all the way up to the Privy Council in London… and WON!

But Parliament about-turned and changed the law to make the UK ruling invalid and ESCAR valid, aaand Malaysians could no longer appeal to UK courts. So the in the eyes of the retrospective law, the simple carpenter was still found guilty. And he was sent to the gallows in 1982.

VERDICT: At first Karpal won in the UK court and saved his client’s life, but Parliament changed the law, so the client was still sent to the gallows in the end. 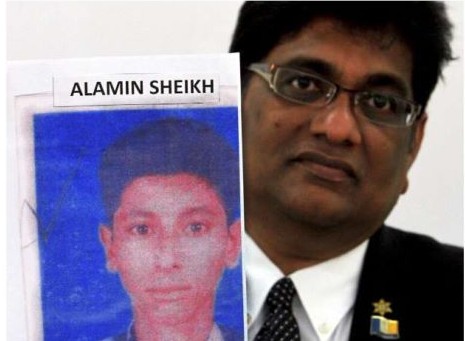 Alamin’s lawyer holding up his photo. Image from The Star

If every foreign worker had their own reasons to sue the Government or their employers in Malaysia, it could probably fill up a book. In April last year, Bangladeshi worker Alamin Sheikh Badsha Sheik sued the Government for RM2.25 million for being wrongfully jailed.

On top of that, he wanted RM3 million damages for the ‘torture and suffering’ he endured for his caning punishment – which he said made him lose his manhood. Alamin claims to be a legal foreign worker with proper documents, hired by a construction company with a monthly pay of RM1,300.

Unfortunately for him, the application was thrown out, and soon he may even be deported out of Malaysia.

VERDICT: The Bangladeshi worker’s case was thrown out and he may even be deported.

3. Pregnant lady who sued coz the Government rejected her work application Noorfadilla with her husband Izwan and their kids. Image from The Star

Noorfadilla Ahmad Saikin applied to become a temporary teacher in 2009, but she was rejected her after becoming pregnant. So, she sued them and WON! How did they win the case? They argued that the Government had breached her constitutional rights on gender discrimination. In 2011, the Shah Alam High Court awarded Noorfadilla a total of RM346,116.50. Score!

“It is one small step for Noorfadilla, but one giant leap for women’s rights in Malaysia.” – Honey Tan, Noorfadilla’s lawyer, The Malay Mail Online

Best of all, her case set a NEW standard in Malaysia. No one has ever been awarded damages for breach of constitutional rights before, plus the court upheld the upheld the UN Convention on the Elimination of All Forms of Discrimination against Women (CEDAW).

VERDICT: Pregnant lady won! On to top it off, all women in the public sector cannot be discriminated against for pregnancy.ever.again.

4. Two boys sue the Government for losing MH370 and their dad Since the boys are minors, here’s a picture of their lawyers Arunan (centre) and Gary (right) instead.

In October 2014, Jee Kinson (13) and Jee Kinland (11) sued MAS and the Government for negligence  over the disappearance of their dad Jee Jing Hang, who was one of passengers on MH370. We’re sure the tragic event is still raw in everyone’s mind but for a recap and updates, click here.

“Our clients are after the truth. We have confidence in our judiciary system that this suit will be heard and dealt with fairly.” – statement by the lawyers, The Guardian

The boys probably the first to slap an MH370 lawsuit on anyone. After not a very long battle, the boys’ mother decided to settle out of court for an undisclosed amount so that the family could move on with life.

VERDICT: The boys’ mother agreed to settle the case outside court so that they can finally move on with their lives.

5. Dyslexic student sues over UPSR leaks (which he had to sit for all over again!) Remember the UPSR leak last year? The one where 473,000 students were forced to resit their papers. Well, a 13-year-old boy sued the director of the Examinations Board and the Government for that. Sadly for him, the High Court struck out the case. Err, at least the culprits who leaked the case were punished right? Nope! The 2 teachers who were charged with the crime, were acquitted. Until today, no one else has been been held responsible. If that’s not bad enough, the kid had to pay them RM3,000 in costs.

So kesian! The horrible experience of having to resit papers caused him a lot of emotional and mental stress. 😥 We’re sure all the other kids felt the same way. But you see, Ananda Krishnan…the student, not the MEASAT guy (don’t sue us!), is a dyslexic child with special needs. His mother Managala Bhavani said that he felt it was unfair and he couldn’t do any more revisions.

“As a simple minded boy with dyslexia he doesn’t know what cheating is about. However, after the UPSR examination papers leakage fiasco and the resit, he has been asking me why adults can cheat and get away with it.” – Managala, Ananda’s mom, The Rakyat Post

VERDICT: The court struck out the case and even made the boy pay RM3,000 in costs to the defendants.

6. Ibans sued Sarawak over loss of lands, food and water Numpang and Ason (in orange vests) performing a miring ritual in front of the Kuching High Court. Image from Borneo Post

The Ibans follow just want others to leave their longhouses and lands alone. But for too long, deforestation has been creeping into the lives of orang aslis in Sarawak. Illegal logging has dire effects on the environment and was one of the main reasons the Sarawak Report was founded. These activities have not only destroyed their food and water supply, but also damaged older longhouses. Over time, Ibans were forced OFF their lands outright!

Finally on 1 Nov 2010, 276 Iban families sued timber companies and the Sarawak government. Represented by Numpang Suntai and 14 others, they were just seeking fair compensation. But what they got was BETTER.

Firstly, the judge ordered the defendants to pay them RM210,000. Then, the court ruled that Ibans have a Native Customary Right (NCR) to the land, making them rightful owners by LAW. The court also declared the timber companies’ licence and land leases void, AND won’t allow them to renew. Go team Ibans!

VERDICT: Ibans won RM210,000 in costs and damages. But the court also ruled they have a right to their lands and removed the timber companies’ licence to log there.

7. Hindraf lawyer who sued the Government for everything “He’s only saw the light once. Which is the case where he sued the Prime Minister over the Tamil schools. In that case, he sued the PM in the Court of Appeal and won.” – M. Manoharan

In this case, Uthayakumar wanted equal treatment for all Tamil schools in Malaysia. So he named Najib, Education Minister Muhyiddin Yassin (who’s also our Deputy PM) and the Government as defendants. When the case was first struck out by the High Court, Uthayakumar and Manoharan went to the Court of Appeal. Finally, the panel there UNANIMOUSLY allowed his appeal.

VERDICT: Uthayakumar has sued the Government for many reasons. Out of all his cases, he’s only won one… which is to fight for equal rights for all Tamil schools in Malaysia.

8. Six-year-old maybe the youngest to sue for citizenship? We don’t know if this 6-year-old kid is the youngest person ever to sue the Malaysian Government but if you know anyone younger, let us know in the comments.

Born to a Malaysian father and Indonesian mother, the boy was adopted by Yu Meng Queng (a lawyer himself) and his wife. Though he was lawfully adopted, he wasn’t officially a citizen. Yep, those are the rules.

“The court ruled that the Federal Constitution does not automatically grant one citizenship just because he or she is adopted.” Annou Xavier, the child’s lawyer on The Malay Mail Online

Later, the court dismissed his case entirely, so his adopted parents have to either reapply for citizenship or appeal the case. The thing about the first option is that it’s tedious, taking 12 months, and his application had already been rejected TWICE before. Wah, so difficult to become a Malaysian citizen! Guess, not everyone gets to win a lawsuit against the Government.

VERDICT: Unfortunately the kid lost the case and doesn’t get to have a Malaysian citizenship. His adopted parents will have to keep trying to apply.

Woah! Can I sue the gomen too? Yeah you can. As proven above, you don’t have to be a high-profiled political figure to sue the government – regular citizens can, too. But don’t la go and sue because you don’t like the colour of the walls in your local municipal office…

Loyar Burok has a great guide on how to go about it, and highlights that you need to prove that it is one of these:

Some of the cases that were won against the Government has brought progressive changes to Malaysia, like the case of the teacher who sued for discrimination against pregnancy. Thanks to her, the public sector cannot simply reject or fire pregnant employees any more. And the Ibans who won their land rights and had the timber companies’ licence and land leases revoked. Let’s not forget Uthayakumar’s success in paving the way for equality for Tamil schools in Malaysia.

Of course, not every case had a happy ending. Where Karpal had technically won and brought the whole Malaysian Cabinet to its knees in the Privy Council, the client was still hanged because Parliament set some kind of retrospective law. We’re no law experts or anything, but we hope to see justice always prevail in Malaysia, not the other way around.

Share this article:
NAH, BACA:
Did BN really use RM2.6 bil for GE13? We try to calculate!