Nothing new already la. 28th July 2015 may just go down in the history books as one of the biggest days in Malaysia’s political history. But just to be clear, let us just list down what happened on that fateful day.

And all in less than 24 hours. Jack Bauer also lose.

So anyway, right after we posted news reports of these things happening, one of our commentors asked this interesting question.

So we got right on it, faster than you can say ‘cabinet reshuffle’!

What we did was speak to 3 people about not just this but all 3 things that we listed down earlier. Ooi Heng from KPRU, Ong Kian Ming from DAP, and Eric Paulsen from Lawyers for Liberty.

The gomen, specifically the PM, CAN reshuffle his cabinet anytime he wants

We were kinda surprised by this as well. All 3 of them said yes, the Prime minister has the power to reshuffle his cabinet whenever he wants. Ooi Heng stated that this is known as collective responsibility.

“Cabinet collective responsibility” is a constitutional convention in governments using the Westminster System that ministers, deputy ministers and parliamentary representatives must publicly support all governmental decisions made in Cabinet, even if they do not privately agree with them. – Columnist Kua Kia Soong in The Malaysian Insider.

(Simplified: Cabinet members must support all gomen decisions even if they personally disagree. And it’s not a Malaysian thing, it’s actually practiced in other countries using the Westminster system (UK parliament system) too.) 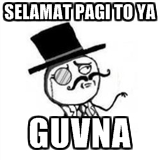 Eric Paulsen adds that cabinet reshuffles do happen every once in a while. In fact, after speaking to him we managed to find a few instances of the cabinet being reshuffled here, and here. So yea, it’s totally fine for the PM to change his cabinet when he sees fit.

Najib even mentions it when talking about this reshuffling.

“Members of the Cabinet should not air their differences in an open forum that can affect public opinion against the government and Malaysia. It is contrary to the concept of collective responsibility that is the foundation of Cabinet government.” – Prime Minister Dato’ Seri Najib Razak, as quoted by The Malaysian Insider.

But what differences did they air? And why was it so bad that a reshuffle was needed?

In a previous article of ours, we talked about how Muhiyiddin isn’t the first DPM to be removed/step down. There were others who left the position because of differences they had with their PM. If you wanna know more, click on the picture below. The differences in Muhiyiddin’s case have been reported to be in regards to his comments about 1MDB. Yea. Mega huge issue in Malaysia now.

Both Ong Kian Ming and Eric Paulsen believe that the last time a cabinet reshuffle was this big and controversial was when Anwar was sacked as DPM. Ooi Heng however, went a step further.

“This is the first time we have a cabinet reshuffle by a scandal-hit PM, which means the new cabinet is a weak one and lacks legitimacy.” – Ooi Heng

Ooi Heng isn’t the only one who questioned this reshuffle, we also found some news sources and statements from various people who have their doubts about it. Examples here, here and here.

“The problem however is with the timing and the way this reshuffle was done. Instead of providing good answers to the many criticisms, the Prime Minister has chosen to remove his critics. But the questions are still left unanswered.

The timing and the way this reshuffle was done seem to imply that the Prime Minister wants only to silence his critics and to stop any possible criminal prosecution.” – Press Statement from IDEAS (local think tank institute) Chief Executive Wan Saiful Wan Jan

But the cabinet reshuffle is only one part of the drama. A cabinet can be changed whenever the Prime Minister sees fit. But what about the Attorney-General? Can the gomen remove him? And overnight at that?

The AG’s removal may have been done legally

So yea, Datuk Seri Abdul Gani Patail, was the former Attorney-General of Malaysia. He was removed from his post and replaced by Mohamed Apandi Ali. Gani Patail was removed so fast that according to The Malay Mail Online, he himself was not aware that he was no longer the AG. And this is the question. Can the gomen just replace the AG that fast?

According to Ong Kian Ming, there are two sides to whether it was constitutional (allowed by law) for the gomen to replace him so fast. So let’s have a look at these 2 arguments.

So this is the side that says that it was ILLEGAL for the gomen to change the AG just like that. We’ll just say first and foremost that AG can be removed wan. It’s not like he sit there invincible, nobody-can-touch-him kind of thing. But the reason people are saying that it is unconstitutional is because he did not have any say in it. We mentioned earlier la that reports say he himself was unaware of the whole replacement. But people like the Bar Council, Lawyers for Liberty, DAP all saying that it isn’t. We’ve linked it to their explanation but we’ll just try and break it down for ugaiz la.

NAH, BACA:
5 ways Thaipusam in Malaysia has changed over the years

Simplified: Basically if you wanna remove the AG, no matter what the reason, the fella needs to have a chance to defend himself.

The problem with this argument is they use a particular section of the constitution (ARTICLE 145 (6)). (We promise you, this is the only article of the constitution we’ll be talking about here, dun run away just yet.) The counter-argument is that Article 145 (6) only applies to one AG that was in that position BEFORE Malaysia was formed. Let’s see why.

Yes, there is an actual argument to why the removal of the AG was LEGAL. Ong Kian Ming brought to our attention this article by Shanmuga K. on loyarburuk.com (which is also the same website that our friend Fahri Azzat writes for) which discusses in detail why it may be constitutional. Not surprisingly, this was also used by the government as their argument to why there was nothing wrong to the removal of the AG.

And like earlier, it’s complex, so we’ll try to break it down.

Simplified: Basically saying that the AG can be removed because the constitution went through some changes in 1960. But why was it changed??

2 justifications for these changes:-

A bit weird, we know. Even loyarburok.com thought so. Yea about that…. The argument is that Article 145 (6) was only used to protect the AG before the formation of Malaysia. After that then no more di.

So….. the AG has more freedom and power but at the cost of the protection given to a normal judge. But even if this sounds weird like anything, it can actually be that this recent removal was…..constitutional!

We may have overused this gif a bit. But just a bit.

But Eric Paulsen disagreed with this. On his part, his argument was that Article 145 (6) could be seen in two parts. First part is for the AG before the constitutional changes were made, but the second part (which doesn’t allow them to be removed without defending themselves) is for all AGs.

So was it constitutional or unconstitutional? You be the judge. All we’re gonna say is that we’re amazed at the efficiency in which they remove him. If only all gomen offices like that la.

In our previous article, we actually discuss whether or not the AG has been losing power over the years (which you can read here). Our conclusion was….dunno *potong stim*. But we mention that what is more important is the fact that the AG is currently NOT an independent body.

Like we mentioned earlier, when Persekutuan Tanah Melayu became Malaysia, the one who would advise the Agong on the appointment of the AG moved from the Judicial and Legal Services division to the Prime Minister.

Ooi Heng, Ong Kian Ming & Eric Paulsen all agree that it’s time for the AG’s Chambers to be independent. So maybe it’s time to revert it back to how it used to be?

It’s the current situation in our country that make people question these changes.

So in short, yes, the gomen can in fact reshuffle the cabinet (even if that includes the DPM). But whether the gomen can replace the AG, well that really depends on who is interpreting the constitution. More importantly, it’s something that should be talked about in parliament.

But what then? Is that what the fuss is all about? Whether some gomen changes were legal or not? Apparently not. As we mentioned earlier, Eric Paulsen stated that a Prime Minister reshuffling his cabinet is normal. The problem is it’s happening when he’s being investigated in regards to 1MDB. (Because really, let’s not forget about the elephant in the country.) And in regards to the AG being removed in the midst of this investigation, Eric Paulsen also told us this.

“The AG should be able to do his job without interference, but out of the blue he’s removed.” – Eric Paulsen

Eric Paulsen then says that if the PM reshuffles the cabinet and removes the AG while the 1MDB investigations are going on (plus appointing members of the PAC to his cabinet), it may cause people to feel that he is obstructing these investigations.

And honestly, if not for the circumstances surrounding our nation now, we highly doubt that a cabinet shuffle and an AG change would be such a big topic in Malaysia.

The writer would also like to credit Alex Lim & Au Yong Wai Nyan for helping him understand complex explanations about the constitution *fist bump*.