You know that feeling when you get something new? That feeling where you wanna just sayang it with all your heart, maintaining its beauty, making sure nothing bad happens to it?

Well whether if it’s a new phone, a bag, or even a new haircut with a killer fade, everyone’s got their own special way of making good looks last.

But it helps if you start off with some updated accessories 😉

Our friends at Volkswagen have just launched the Polo ALLSTAR and the Vento ALLSTAR – a more lengchai and even cooler version of their original Polo and Vento brothers.

Performance wise, it’s the same as the original Polo: 1.6MPI 105PS petrol injection 16-Valve Multi Point Injection (MPI) engine and a 6-speed automatic transmission with Tiptronic. It’s also quite fuel-efficient (6.3L per 100km), so it’s not a bad choice for city-drivers who want a sportier look. Best part is, it’s priced at RM72,888 – pretty decent when compared to compact cars within this range. The Vento ALLSTAR on the other hand, comes with RM7,000 worth of exclusive accessories… pretty much the same as the Polo ALLSTAR, but with an additional trunk garnish. It drives the same as the original Vento, with a 1.6L MPI engine and 6-speed automatic transmission gearbox and Tiptronic function, has an output of 105PS, a maximum torque of 153Nm and fuel consumption of 6.5l per 100km. It’s priced at RM78,888.

But the unique thing about the Vento ALLSTAR is its MY VW Drive App which keeps the driver safe and in-control, with various insights on the car’s condition, performance, and even driving style. There’s also immediate help from Mondial Roadside Assistance in case of an emergency. Considering that Malaysian drivers are kinda crazy, it wouldn’t be a bad idea to have this feature la.

And speaking of new cars, we asked some of our readers about the habits they have when they get a new ride. We also managed to kepoh with a few car expert friends on some of these habits, and here’s what they told us:

Ah poh so yeng one suddenly? Image from sickofyourcrap.com

If you’re buying a new car, especially a better one than your previous, it’s gonna be able to tahan your need for speed. Step on the pedal only la, why so kancheong?

“Most of the owners will do this because the car is new and they sayang their car. But once the first service is done, they will drive the car like they have stolen the car.

In actual fact, that IS the way to run in your engine. Running in your engine is to allow it to get used to the optimal working condition. Mind you, driving it like you’ve stolen the car means your fuel consumption will increase as well.” – Tommi Choo, Operations, Carsome.my

Turns out there IS truth to this. In fact, ‘running in’ was a huge thing back in the olden days, so much so drivers with their shiny new wheels would stick this at the back of their cars: 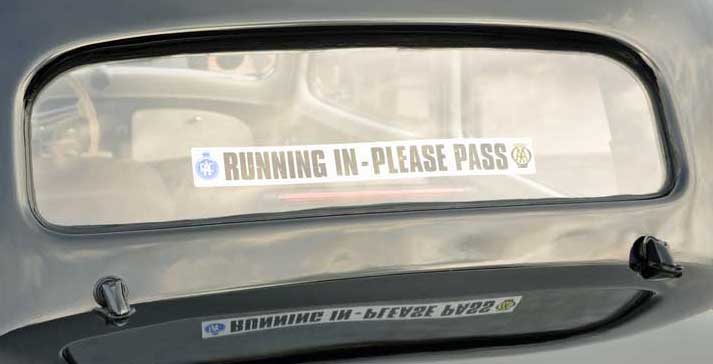 Stickers so people don’t judge you 😛 But today’s cars are better built and use modern engines, so no real need for this… Photo from osl282.info

2. “Leave the plastic covers on the seat/headrest/sun visor… anywhere you see it.” Our writer Klaus has kept his plastic on for donkey yeeeaaarrrss.

Oookay, not sure why but it was the MOST common comment submitted by our readers.

“We can understand why people do that. Some even leave the plastic sticky sheet on rear view mirrors as to not let it collect dust.

But it really doesn’t make any difference as when you send the car for wash and vacuum, it will be cleaned thoroughly anyways.” – Avito Makajil, CEO of Young Aces Technical College

But it’s not just about people cleaning your car… didja know that the plastic can actually be pretty harmful? In our warm Malaysian weather, these bits of plastic release toxic gasses when they heat up under the sun. Since heat speeds up the outgassing process, anyone breathing in these gasses can end up with dizziness, nausea, eye and nose irritations, and even asthma. And don’t even get us started on the long-term effects! Ok, our Managing Editor, Lydia, is totally guilty of this: “I bought a new car in 2014 and told myself NOT to buy an air freshener until I really, really have to… You know la, once you have some freaky deaky lavender perfume, your ‘new car smell’ completely gone edy.”

But heads up – didja know what causes this peculiar smell? Most of it comes from different chemicals and materials in your new car, so if you wanna create your own brand of ‘New Car Smell’ perfume, make sure you have these ~fragrance notes~: plastic covers, car polish, leather, glass cleaners, glue, sealants, lubricants, and a dash of gasoline.

Sell it to second-hand car dealers, sure untung. Actually, the smell isn’t the only thing that’ll stay in your car… You’ll also be inviting unwanted guests, like the annoying small brown roach!

“Those actions mentioned is a definite big NO NO in car. Of course, drinking is still allowed but preferably plain water. Because if plain water is spilled, it’s easy to clean.

Any sugar content drinks should be avoided at all cost in the car as if it is not cleaned properly, you will attract bugs/insects to your car which can be a headache to clean up after. Strong smell fruits like durian/manggis are a HUGE NO NO too. Those smell tend to stay in the car for days!” – Tommi Choo, Operations, Carsome.my

The worst part is if your car has fabric seats that completely absorb smells and liquids… Well thankfully the Polo ALLSTAR and Vento ALLSTAR has leather seats that are easy to clean with a wet cloth. 😛

5. “Promise to service the car according to schedule… but forget after the second appointment.”

After each car service appointment, you’ll find a new sticker on your windscreen reminding you on the date/mileage count for your next service. But yet, how many of us actually follow these dates religiously?

“I’ve seen this happen a few times especially with people who are familiar with vehicles as whenever the car is sent to service, they will need to pay for labour and marked up prices on oil change, etc.” – Sylvester Yulang, Executive Supervisor/Trainer at Young Aces Technical College

So unless you actually have knowledge in servicing your own car (plus the equipment, spare parts, oil, yadda yaddah), it’ll be best for you to send it to your service centre according to schedule.

Different car makes have different servicing schedule… some every 6 months or 10,000km, Volkswagen for example is at every 15,000km or 12 months (whichever comes first). But the most important thing a car owner can do, is to Stick. To. The. Schedule. It saves money in the long run and improves your car’s performance, since servicing is the best form of preventative maintenance. Learn from us. Our transport broke down when we were on our way up to Cameron Highlands. :'(

6. “Must send to temple for prayers!”

For some people, they might want to consecrate or bless their car, so they do religious rituals on it. Hindus for example pray over all kinds of things that are used in daily life – homes, cars, oven, blender, stoves, TVs, handphone, etc – just before using it or as soon as possible after purchase. This is called a puja.

“For Indians – we have to take it to the temple for a quick prayer and break coconut. Break in front of the car lol. To ward off bad luck.” – Gowri Krishnan

Catholics also would bring their cars to church for the priest to pray over. Muslims however don’t have any religious rituals when it comes to new cars, our SOSCILI team told us, though they would pray for a new house.

In Malaysia where people practice different religions, it is also not uncommon to see people placing objects of worship on their car dashboards, such as crosses, Quranic verse stickers, rosaries statues of deities, symbols, and so on. Walao damn painful to hear la these rules… A few of us at CILISOS are pretty chubby, one of us is actually a serial chair-breaker weighing more than 100kg! *proud* But what to do, just more of us to love la. And we’ll keep eating our McNuggets too, thank you very much.

“How fat is fat? Follow the weight allowed to carry (depending on the specs of the car – you can check the maximum weight allowed for the tyres as well) or it may explode and you could damage the suspension and the absorbers.” – Avito Makajil, CEO at Young Aces Technical College

To be fair, carrying a load (regardless whether of the human kind or not) heavier than the maximum weight allowed can be pretty damaging in the long run. But if you really wanted to protect your suspensions, you should be more concerned with avoiding the 239518347 potholes on our Malaysian roads! With a pothole so big, it’s not just your suspension that will hancur. Dignity also hancur… Photo from The Rakyat Post

8. “Be a good Malaysian and avoid double-parking for a while. Eheh.”

That time a driver got so pissed, he/she reversed the double parked car into the middle of Old Klang Road. Good times!

New car, sure la you wanna jaga-jaga a bit. Don’t simply overtake, don’t cut queue, don’t double park… basically don’t be a jerk on the road. But after a few months (weeks?), the habit comes back! But actually right…

“Should never double park in the first place whether with new or old car. It’s common courtesy and respect for others.” – Avito Makajil, CEO at Young Aces Technical College

“This should be avoided as this is bad habit from Malaysian drivers. You not only put your car at risk, but you may end up as an inconvenience to others too. Not to mention, if the car is towed away and those tow truck don’t bother to take care of your car, it may end up damaging your car too.” – Tommi Choo, Carsome.my

We’d never suggest double-parking, cos we absolutely hate it when cars clog up the road and cause traffic jams. But there are certain places that truly have a parking-to-car ratio of 1:32o57104 (*cough* PJ Uptown, Subang SS15, Damansara Perdana…), so if you HAVE to double-park, make sure you leave your number on the dashboard… Just make sure you pick up your phone and apologise for the inconvenience. Photo from LowYat Forum user UpCar

It’s not easy to keep things looking new, so it’s nice that Volkswagen have introduced the refreshed, ALLSTAR edition of some of their existing models. Apart from the Polo and Vento, keep a look out on the Jetta ALLSTAR… we hear it’s launching soon with a similar lengchai upgrade. 😉

In the meantime, take our poll! Which have you done with a new car? And any other habits you wanna share? Tell us in the comments.