Chinese peepur in Malaysia aren’t just Chinese peepur. They’re a melting pot of their ancestors from China, with a heavy dose of flavouring from the Malaysian rojak pot, and of course the momentum of modern times. And the combination of these things is never more evident than during Chinese New Year.

A few weeks ago, we launched a contest to ask our readers about the weird traditions that have evolved over time. And boy you guys sure didn’t disappoint – with stories of underwear parades, discount fruits, and angpow lotteries, it’s clear that there are an infinite amount of variations in our cute little traditions.

The key message in AIA’s charming new CNY video is that traditions don’t form families, families form traditions, and that’s true in almost all the entries sent in by our readers.

Ah Mun affectionately describes this as “wiping the new year clean”, and we gotta say, his folding technique confirm-win. “We sculpt “mun see chee” / aka toilet paper into animals in the year of the particular zodiac of the CNY. Eg Horses for the Horse Year and just simply decorate the family gathering place with it.” – Joachim

In case you think Joachim is some particularly juevenile millenial, he revealed to us in his entry that he and his fam are closer to their 40s and 50s! “Loo roll is something we played with as kids. And as old farts we still play with them.”.

And boy does that make them cool.

2. Angpows with random amounts (and we mean random) – Yvonne Phan

UGAIZ SORT IT OUT URSELFS! GIF from Says.com

Most of us former Chinese kids know… that one of the great pleasures in life was to open up an Ang Pow and see more money in it than we expected. Yvonne’s family really takes this to the next level.

As we grew up and got married, my parents decided to start the tradition of giving angpow through lucky draw – meaning different angpow contains different amounts, and my siblings and their spouses will pick the angpow and see who gets lucky. Think this is pretty fun way of giving angpow. – Yvonne Phan

WAH. We sure hope the angpow packets they chose are thicker than these free ones we found in our office. Vera couldn’t get us a picture, but from her description it kinda looks like this fruit tea mix from junetan84.blogspot.my

We recently published an article about how prices always go up during CNY, and Vera here might just have a solution. Her “hot-headed” family are prone to over-heatiness due to all the roast meat, mandarin oranges and fried treats, so their solution is a remarkably cost-effective tradition.

“We will buy non-CNY fruits e.g. apples, sour sop, grapes, honey dew which are much waaaay cheaper because not as popular limau, pomelo and pineapple. Well will chop it up and eat it chilled with cold red bean black glutinous rice soup and topped with some soya milk. When mixed together, the dish is called “Ong Kor, Ong Dao Sui” which literary means red fruits, red bean soup. It’s our version of ABC, cheaper but more healthy & delicious! Sluurrrppps!” – Vera

According to Vera, the tradition started as far back as 15 years ago, when they found that non-CNY fruits were alot cheaper during CNY season. “Also because everyone balik kampung, the supermarkets at the city NEED to clear off the fruits badly.” The tradition is so practical that even her colleagues and neighbours have started experimenting with their own versions.

There is one fruit they don’t recommend tho. “Don’t lah put durian, later all the relatives will pengsan when we greet them for ang pao. :P”

4. Everyone wears the same red underwear. And proves it – Grace Kho On the first day of every Chinese New Year, Claire’s whole family would wear blazing red underwear for good fortune. And based on this photo she sent us, they’re displayed together somehow as well (we dared not ask for details).

“It has been practised ever since I can remember, so 20 years plus. Evolved from the tradition of wearing red clothes on the first day of Chinese New Year.”

Surprisingly, this isn’t just Claire’s family, or a Chinese people’s tradition. Guess where this picture was taken? We thought China too, but it’s actually from Spain, where ringing in the New Year with red underwear is also considered to bring you good luck (!). At Jasmine’s house, angpows are not given… but earned.

“On chor yat (Day One), we will have angpow ceremony by lining up in front of the eligible angpow givers and we will take turns to receive them. But everytime before receiving the angpow, we have to give good luck wishes in a tone of a song or an act or anything creative we can think of.”

The results we hear, are often hilarious. But how did this weird tradition start? “With my bunch of cousins who loves Jay Chou, Backstreet Boys and all the early 00’s hits, we just spontaneously did a song for the wishes and it never died down till today.”

NAH, BACA:
4 Things That You Probably Didn't Know About Islam and Marriage in Malaysia

If that’s not the definition of a tradition, we don’t know what is.

6. A family that literally counts its lucky stars – Queenie Neoh As any self-respecting Chinese person can tell you, CNY is alot about luck. Whether or not its your animal year, wearing your lucky underwear like Grace’s family, or buying a new car numberplate. But Queenie’s family takes a slightly different approach to this.

“You see, for every lucky encounter and every piece of good news my family and I receive during the year, we would fold a coloured paper into origami lucky stars and store in a jar. Then on CNY Eve, we will all happily gather around in the living room decorated with CNY decor chatting away and of course, open the jar to count the number of blessings we’ve had throughout the year and express our gratitude and thanks for the good things that happened in our lives. 🙂 We would then stand up, give each other a hug and wish each other a much better, smoother, healthier, more successful year ahead.” – Queenie

Yes la. This is the kinda lucky we need more of! Queenie’s family tradition started about 5 years ago when the whole family was reeling from the flood of “negative news on the web portals, in the newspapers everyday about impoverished families and malnourished children in war torn countries, mass killings around the world, homeless people on the streets”. Umm… *CILISOS twiddles thumbs*.

Her sister suggested they do something about it, and this was their family’s way of not taking the things they had for granted. Leeson’s little brother, eldest brother and his girlfriend with the cutest CNY tree ever

This tradition from Leeson’s family might seem a bit kesian to outsiders, but we absolutely love it.

“Before CNY, my dad will starts to look for dried branches around our taman or in the jungle near my school. We will put the branches into a pot and decorate it with tons of CNY deco’s, fake flowers, lightings and angpaus. On the first day of CNY, my family will usually have an open house where all my relatives and friends will come, gifts will be put below the tree and its awesome.” This is a real CNY tree done with pussywillows. Ok wut… quite legit like budget cosplay. Image via donaldandcathy.typepad.com

While people (not just Chinese) all around the world do the new-year makeover of Christmas trees, Chinese New Year trees are traditionally made of pussy willow, kumquat, mandarin, bamboo or peach trees – all of course which traditionally turn quite expensive around Jan-Feb.

This brilliantly GST-friendly tradition was started by Leeson’s parents. While he can’t remember when this tradition started (sometimes you don’t really need a leeson), but it’s been around since he was little, and it’s become the norm for them to set this fragile little tree every single year.

In fact, earlier this month… “my dad has already started to mention about looking for the branches for this year’s tree!”

8. A bizarre (and very Chinese) version of a Christmas song –  Yvonne

Drinking and merrying is a very integral part of CNY, but Yvonne’s family really take it to the next level with something they call “The Yum Seng Song”, which is apparently sung to the tune of… Jingle Bells!?

“My family (parents, uncles, aunties, cousins as well as all the kids) will sing a song whenever we yum seng….

Which translate in English to

And then we proceed to bottoms up our drinks!” – Yvonne

How the HECK did THIS tradition happen!? “My 3rd aunt gets poetically creative whenever she became tipsy. One night while the family were enjoying some kacang and beers after a Christmas party at home, she suddenly burst into a song and she came up with this song,”

Wow. This is one family we would love to party with anyday. 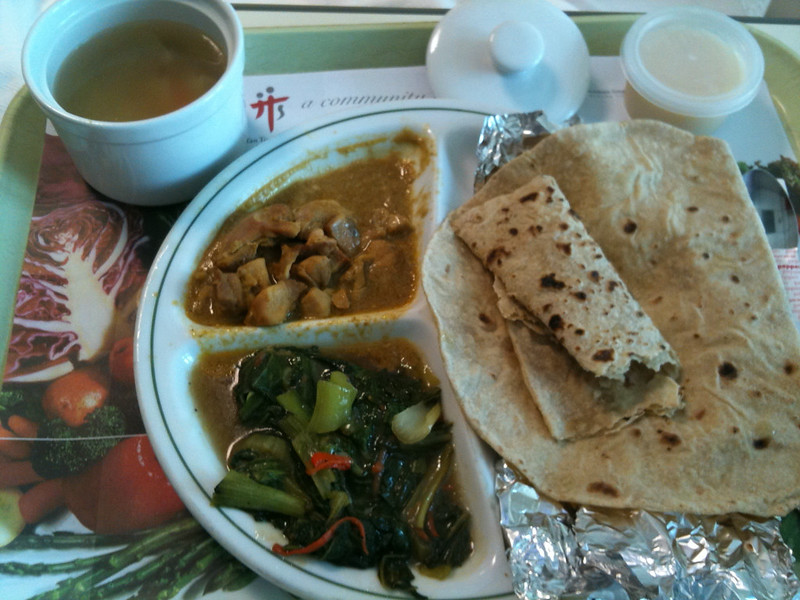 As we mentioned earlier… Malaysia really is a mish-mash of cultures, and this one is a perfect example.

Lit Hong, who has a strangely indian-sounding email (mixed ka?), only knows how to cook one thing. So when a Chap Goh Meh family meetup turned into a pot luck a few years ago, he rocked up with some attar flour and ghee, to make chapati’s on the spot. And guess what? The whole family joined in… and soon they had Chapati to carb up everyone else’s more traditional Chinese dishes.
And just like that… a new tradition and a new pun were formed on the same day.

Hmmm… guess what the common trend is here?

If you said “weirdos”, then you’re kinda missing the point. In almost all the entries we received (even those that sadly didn’t make the cut), we found that these weird traditions actually brought their families closer, and that they were proud to share them with family (some of whom might not even be Chinese!)

So this CNY, perhaps it’s time your family came up with something totally unique, to embrace our diversity, get to know our family and friends better, create meaningful memories, and join AIA’s contest next year to win movie tickets like everyone else here 🙂

From all of us at CILISOS and AIA, Happy Chinese New Year Malaysians!