Screencap from The Malay Mail Onl LIKE ILLUMINATI YO! But actually the truth is quite potong stim.

A shadow cabinet is a cabinet made up of opposition party members to follow or ‘shadow’ their counterparts in the actual parliamentary cabinet.

The objective? So they can learn the role to get ready for the real role if the opposition wins. So it’s actually more like this. Anyways, Malaysia’s opposition just recently introduced a shadow cabinet of their own… Well, one of the opposition parties anyway. The Democratic Action Party (DAP) announced today that it was forming its own shadow cabinet. However, they did this without including PKR and PAS.

But what does this mean for us regular Malaysians? Well read on… because the truth… will SHOCK YOU (but if it doesn’t, then sorry la smarty pants)! Shadow cabinet pretend-pretend for what?

Let’s take for example the Transport Minister. The opposition appoints a Shadow Transport Minister (sounds damn cool, like a DOTA power). The Shadow Transport will literally follow Dato’ A as a teenage girl follows Justin Bieber on Twitter. He will scrutinize everything that Dato’ A does in regards to highways (not spying & taking secret videos all), and then he will question Dato’ A about them. And maybe throw in a snide comment here and there.

Now, let’s say the ruling party loses the General Election. He and his other cabinet members will step down. Then, this will lead to the shadow cabinet of the opposition coming into effect, meaning the Shadow Transport Minister drops his shadow and just becomes the Transport Minister. Then maybe the original TM can now become the STM. Wheeee

Other countries have a shadow cabinet too! (Some more got salary!)

Yes, the shadow cabinet isn’t a new concept invented by Malaysians. The shadow cabinet is an informal process in the British Parliament that first started to develop in the mid-19th century. It basically exists the same way over there as what we talked about earlier but one thing we found interesting was that some members of the UK shadow cabinet receive a salary. To be honest, we couldn’t actually find anything that said that every shadow cabinet member received a salary but we know the leader of the official opposition does.

Besides the UK, Wikipedia provides a list of countries who have one or at least have plans to have one (because Malaysia is listed but we don’t have an official one just yet). We managed to find an elaborate explanation of how the shadow cabinet in Australia worked. But it’s pretty much the same as the UK, so we’ve leave the link here if you’re interested. An example of UK’s shadow cabinet. Photo credit to dailymail.co.uk

But maybe we’d just highlight that our neighbours Thailand practice ,or practiced it. We say practiced because we found links of their presence in 2008 and 2011 but nothing since then.

The Thailand opposition came in to power during the 2008-2011 Thailand political crisis. During this time, they had a shadow cabinet that was able to come in and take over right away. However, the shadow cabinet list and list of people who eventually formed the cabinet (from Wikipedia though), show that

So if anything, it’s possible that a shadow cabinet can show you who NOT to pick as a cabinet member.

So, back to Malaysia. What’s going on with our shadow cabinet? Well…

DAP has a shadow cabinet, but it doesn’t include PKR and PAS

So yea, we’re talking about this now because DAP has recently made their own shadow cabinet. And we’ve also mentioned how this shadow cabinet doesn’t include members from PKR and PAS. But what actually started it all was when Wan Azizah (newly appointed head of opposition) said that there was a need for the Pakatan Rakyat opposition to REVIVE its shadow cabinet.

Wait, she said revive. Meaning they had something before? Apparently, yes!

Here is a supposed list of the shadow cabinet of Malaysia back in 2012. We’re only gonna include part of it, for the full list please proceed here (note that these were back in 2012)

NAH, BACA:
Malaysian journalists have been banned from Parlimen lobby. This might change the news you read

c. One seat for either a Sabahan or a Sarawakian who will be looking after East Malaysian affairs.

A. It had three shadows for every minister (assumedly to keep everyone happy. Thailand does this too)

B. It never came to pass. After the election, nothing happened.

As far as we can tell, no one shadowed anyone else. And that’s kinda worrying lor. As one columnist Kua Kia Soong, pointed out, it’s a bad thing, especially if more than half of the country voted for the opposition in the past GE. Because this shows that despite having the popular vote, the opposition had not been able to provide a concrete alternate cabinet to the existing one.

Kua Kia Soong also pointed out that this could possibly be due to a shadow cabinet forcing them to take stands on issues like the NEP that might make them lose votes. But as far as official answers are concerned, DAP says that Pakatan was unable to come to a consensus. So in the end, the situation looks something like this.

Which is kinda like that list up there anyway. Except that Lim Guan Eng has publicly come out and said that there is no Pakatan shadow cabinet because issues with PAS President, Abdul Hadi Awang.

“He does not consult with us, he does not even consult with his own PAS leaders. How can we cooperate on this?” – Lim Guan Eng, as quoted by The Star

It was reported that after that he said it was better that each party had their own shadow cabinet, and that discussions should be held between parties. From what we can figure… DAP forming their own shadow cabinet is because they were simply tired of waiting for Pakatan to decide. To DAP’s credit, it’s a very ethnically balanced cabinet, despite PAS’s Hadi calling DAP racist for coming up with their own cabinet.

“When we set up a shadow Cabinet of our own, it is so we can debate issues according to the portfolios… at least our lineup consist of all races. But PAS has only one race,” – Lim Guan Eng, MalayMailOnline

As we showed earlier, there has been a cold war between Hadi and Guan Eng, which is all but demonstrated in this picture. 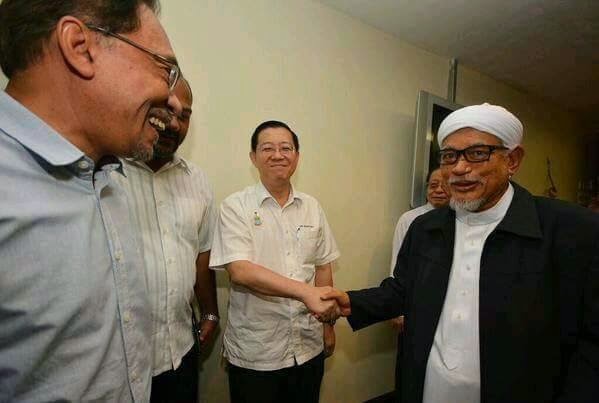 However, having some people that are following ministers can’t really be a bad thing right? Even if they are DAP, at least someone is being groomed for the eventual role.

Don’t get us wrong when we say this. We don’t mean to say that Pakatan is a downright bad alternative to the gomen. But we have to consider that a shadow cabinet would send a very strong message about the readiness of the opposition.

As Khairy once said,

“This is what the Barisan Nasional (BN) has challenged them all along… if they feel they are ready to form the government, show us your shadow cabinet.” – Khairy Jamaluddin as quoted by The Malaysian Insider.

And he has a point. Shadow cabinets are actually really important! It’s been two years since GE13, and if the opposition wants a realistic chance at winning GE14, the shadowing should start now. But the disagreements within the opposition show us that there are some serious issues that need to be worked out, because the gomen isn’t fazed at all.

“This only goes on to show that the Pakatan Rakyat coalition is merely a coalition of convenience which is incompetent and incapable of taking over the governance of the country.” – Choo Wei Sern from MCA, as quoted by The Rakyat Post

Imagine if the Opposition do win right now, and they can’t decide who gets to be the real ministers. Even if they go back to their old 2012 list, with one candidate per party for each role, it sounds like a recipe for disaster. And the only person they can agree on is Anwar as Prime Minister. But Anwar is in jail till Vision 2020 so…

So the message here is clear. If the opposition want a realistic chance of not just winning the next election, but running the country once they’ve won, then they’re gonna need to sort things out and stop being afraid of their own shadows.