Following a protest by angry taxi drivers in front of the Finance Ministry on Oct 17 about the e-hailing (Grab) issue, a meeting with Dr M was held in Langkawi on Oct 21. During the meeting, the taxi drivers acted rudely while Dr M was giving a speech. Dr M was so taken aback by such a negative reaction from the taxi drivers that he said that he can resign if they dowan him as PM.

But it’s not Dr M they want gone. It’s Transport Minister Anthony Loke, for his “failure to resolve” the taxi vs Grab issue. That’s why they wanted to hold a protest today in Padang Merbok, Jalan Parlimen. But the protest was postponed becos they need to apply for a permit to do it.

On the other side of the coin, there are commentaries about how taxi drivers themselves need to look in the mirror and improve their ways of service. This article, originally posted on 5th September 2014, talks about the realities of the taxi industry here in Malaysia. Oh and RIP Uber.]

It’s no secret that our local cabbies are flawed in many ways: rip-offs who don’t use the meter, gangsters, dirty… And who could forget Natalie Heng’s 2012 insightful exposé about our cabbies being ‘worst taxi drivers in the world’?

As a Malaysian with first-hand experiences of the horrible taxicabs, it ain’t easy to sympathise – or even emphatise – with them. To know that you’re being bullied into submission sucks and it’s an automatic knee-jerk reaction to lambast them for what they’ve done.

But let’s be honest – there’s a domino effect for almost everything. In-line with our nature to be equal parts kepoh and objective, we dug a little deeper to see if they’re really at fault for losing favour in the eyes of customers.

Let’s start by crunching some numbers.

How much do they need to earn?

Before we answer that, you should know that cabbies have to start paying before they start earning. (To be fair, technically all businesses do but the spotlight’s on our cabbies in this article.) We asked a few of them for their opinion and here’s a gist of what they shared:

From the cabbies we spoke to, the average amount of money they need to fork out lies within the RM1,200 – RM1,500 range. There’s also a downpayment which they need to pay upfront which hovers around RM5,000 a car. No off days, no compensation, but a truckload of financial commitment. | Flickr/CreativeCommons

Now in our previous article, we made some calculations to find out how much they actually earn (which we concluded was really little). We soon found out that it was even worse than we thought.

Jusri* explains that with 8 kids and a sick mother, he needs to earn at least RM4,500 to ensure everyone gets properly supported. Ideally, he wants to bring home RM6,000 every month so that everyone lives comfortably.

He adds that on good days, he earns about RM150/day, NOT RM175/day like what we thought. Which means, to reach his minimum commitment of RM4,500 a month, he has to work for 12 hours for 30 days. That’s an average of RM12.50/hour. So how much will Jusri have to work to reach his ideal salary?

He needs to work for at least 16 hours a day, for 30 days straight, NOT working for 20 days like what we thought. That’s like starting work at 6:00am and finishing at 10:00pm without a breakfast, lunch, dinner or toilet break, ugaiz!

Granted, not every cabbie has 8 kids and a sick mother to support, but it doesn’t discount the fact that cabbies need to cover at least RM1,200 a month for their primary costs.

Koh*, on the other hand, has three kids who have all grown up, so he doesn’t need to fork out as much. However, even as a cabbie in Klang, he shares that he spends about RM1,200 a month on his taxi service. To make matters worse, if he decides to quit his job, he’ll need to return his car to the company as he rents the car on a monthly basis. At 50-something reaching 60, looking for another job wouldn’t be as easy either.

Isn’t the government helping them or something?

We’re sure they are in one way or another. With the increase in the fare starting rate (reviewed in 2009) and the TEKS1M initiative, we can’t say that they’re completely helpless. But here’s a shocker – according to SPAD’s Taxi Transformation Plan dated June 2013 (a plan with the objective to set the basis of development of taxi services (!!!) in Greater KL/Klang Valley), they, too, work under the assumption that cabbies work 29 days a month and 12 hours a day.

Granted that it’s not as bad as Jusri’s nightmare of a 16-hour workday for 30 days, but it doesn’t make it any less ugly. Chekkit: 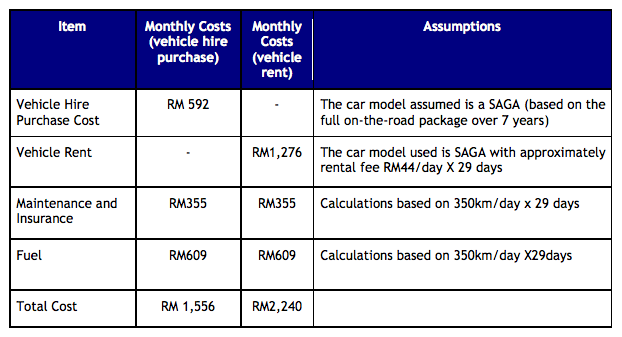 Not good with numbers (like most of us at CILISOS)? Check out the following excerpt that came after the chart:

It was also suggested that it was possible to obtain up to RM17 per hour in fares. Based on these assumptions and the operating costs set out in the previous section it is estimated that an individual driver could potentially make up to RM36,000 per annum based on a working day of 12 hours and working 29 days per month. The Kuala Lumpur City Plan states that the average household income in Kuala Lumpur is higher than anywhere else in the country and stood at RM 5,488 per month in 2009. Although the taxi driver net revenue is less than average earnings across Kuala Lumpur the figures are understood to be comparable with the wage levels of bus drivers in the region. – also in Page 19 of the Taxi Transformation Plan. Not good with lots and lots of words in one paragraph (also like most of us at CILISOS)? Nah:

All that without taking into consideration the increase in cost of living since the good old days of 2009, maintenance fees dan lain-lain. So the question is this – how is SPAD okay with such pathetic wages and at work rates that are borderline inhumane?

In fact, here are some other heartbreaking insights from the cabbies we interviewed –

If there’s also one line to echo it all, it’s this: “It’s not easy to make a living as a taxi driver...”

And this: “… but this is the only industry that would accept me for my age and experience…”

And this, too: “… but I’ve just gotta support my family.”

But how does that justify all the other nasty things about them? It doesn’t, at least not entirely. Crazy financial commitments may justify high prices (or fares without using the metre), but it doesn’t entirely justify rudeness, a smelly car, lateness and other unpleasant stuff most of us have experienced. But we need to remember that not all cabbies are as bad as you think – we’ve had many quality, if not decent, trips with them. Sometimes, you’ll even bump into extraordinary gems.

Aite, we’re whipping out the emo card at this point. Here are three heartwarming stories just to restore your faith in them:

1. The one who protected Cikgu Yap’s daughter… 2. The one who drove a girl from KL to Perak without charging a cent…

As told to Red FM | From TheStar.com.my

3. The one who returned our EIC’s iPod…

Experienced by our EIC, Chak. | More on lowyat.net

FYI, the cabbie didn’t collect the reward that was waiting for him.

So are you asking me to stick to local cabbies instead of GRAB?

But we should be positive in our outlook and hope that as Grab grows its presence in Malaysia, so will the taxi industry in general.

While the next best option (for cabbies) is to quit their jobs and move to Grab, it’s not as easy as that – they’ve got so much commitment to taxi companies and/or SPAD that it would leave them at a loss. So even if they wanted to jump ship, they can’t. Having Grab dominate the market is a great thing for consumers but at the same time, it’s leaving cabbies in a difficult position.

Realistically speaking, it’s hard for our cabbies to reach the comfort and standards of Grab with the many things they have to put up with, but they’re trying to improve.

So, what now? Taxi drivers are being pressured from both sides – the forces governing them financially and Grab’s presence in the market. Let’s just hope that taxi companies change their policies to make the industry more sustainable. If change is made at the top, it will – in one way or another – reflect at the bottom.