The answer to that crappy question (pun shamelessly intended) is yes, and no. Rewind to August 2014 and there were reports about a woman seen pooping at a MRT station and pictures began circulating, and it promptly sent the ever-vigilant Singapore webspace into overdrive. The debate brought in elements of mental illness, civility, cultural differences and of course, nationality. Someone should do a PhD paper on this. Conversation thread from mothership.sg

There are a few schools of thoughts here:

Reaction A: ‘A person pooping in public. Has to be PRC!’. This dude even wrote a whole article collating all these wondrous incidents. Must have been an enjoyable time on Google images.

Reaction B: ‘You guys can tell she’s from PRC when she’s facing the other way? Show me where you purchase your superhuman potion can?!’

Reaction C: ‘This happens again. Sien. Too many foreigners lah!

Reaction D: ‘No one in their right mind would do this. It just doesn’t seem possible’ A commenter from theonlinecitizen.com taking the analytical route.

Police reports have since come out to say that it was a Singaporean woman after all, believed to be of unsound mind. 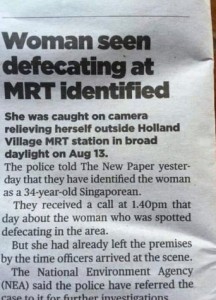 The police statement as reported in The New Paper. Image from therealsingapore.com

Many are refusing to call the authorities’ bluff by disputing that it is a cover up act by the government to quell the storm against the influx of foreigners.

The conspiracy theorists were hard at work. Conversation thread from therealsingapore.com

Whatever it is, we wanted to know – how and why did the majority of cyberspace (and people in general) jump to the swift conclusion that it was a PRC national in that photo? Bear with us as we investigate.

Don’t they do these things all of the time?

Sure, they have added their own artistic touches to 3,500 year old Egyptian temples; they wanted to keep some exhibition butterflies as neopets; and they alarm the fashion police every now and then: 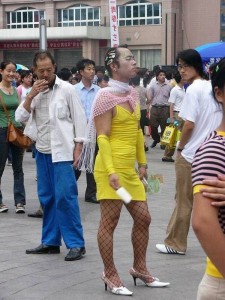 My banana shake brings all the boys to the yard. Image from socialphy.com

This writer neatly summed up the list of common irritations one may find in PRCs living in Singapore. Speak too loudly? Check. Unhygienic? Check. How dare you not speak English? Check. Don’t you know how to use toilets? Check. Also, recent incidents of a PRC mistress breaking up a household and fights involving PRC nationals doesn’t help their cause either.

So, it comes as no surprise that PRCs do bear the brunt of a lot of the negativity, despite the many nationalities of foreigners which have made their way into his island in search of a better life. (This shows that foreigners make up nearly 50% of Singapore’s entire workforce)

So, are they really that different from us?

YES. But hold on, keep your knickers on.

Truthfully, to answer this question, we would first have to define ‘they’, which is frankly not possible. What we see on mainstream media, read on The Real Singapore, or hear from that uncle discussing PRCs while he’s playing chess on the roadside is only a fraction of the PRCs that exist.

Like any community, you will get your range of generous folk who will feed a homeless dog, the executives that gets their assistants to cut their toenails and weird chaps who go from bin to bin to collect Choki-Choki wrappers. There is no one definition for a community of people, much less an entire nation.

The current population of PRC is nearing 1.4 billion. As a comparison, that’s roughly 26 times what Singapore has.

So, the influx of PRCs come in the same ratios of normal people to eccentric characters, but the media reports (and in turn, we tend to remember) the news of a lady pooping in public rather than a PRC man climbing up a tree in a Superman cap to save a stranded cat named Cuddles. (Granted, we are not sure if this has occurred before but there are nice people out there!).

With social media and internet, events are easily magnified. There are 1.4 billion of them with different cultural beliefs, education, values and status backgrounds. There are bound to be a few ‘free-flowing’ ones. Normalised against their entire population, such incidents are small in percentage.

NAH, BACA:
Is it realistic to implement swimming lessons in Malaysian schools? We calculate!

Once this happens, it is easy to apply that perception across the entire community (in this case, the PRCs) and put the blame on their country of origin. The simplest reaction to this would be to bemoan their numbers and think that the only solution is for them to leave the country.

‘Please see your way out, thank you’. Captured from sgforums.com

When first arriving in Singapore, PRCs can be confused when confronted by locals or local authorities on various issues which they find perfectly normal when back home in large Chinese cities. In fact, cases such as defecating in public are common occurrences throughout other similarly Chinese-populated territories, namely Hong Kong and Taiwan.

Also, for those who say Singapore is a competitive place, it is a whole diffeent galaxy when it comes to how it is like in PRC. The single child policy, intense competition for job opportunities and overpopulation has led to a dog-eat-dog land (no, we are not doing jokes about eating dogs here). PRCs have a lot more on their minds – thinking of ways to JUST. GET. THINGS. DONE. and sometimes do overlook the norms of social etiquette. In fact, it has led to some innovative occurrences: 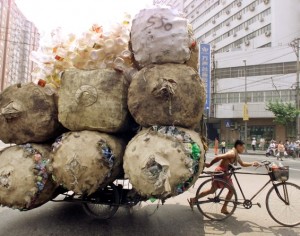 Junk in your trunk, Ms. Minaj? PUH-LEEZ. Image from katenews2day.com 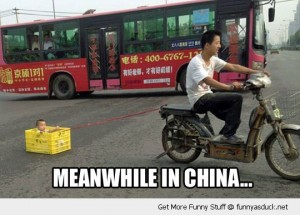 No, we are not trying to justify the many misbehaviours of PRCs outside their land but it would help to have an understanding of what drives their judgements and decisions. And again, this is only a small portion of PRCs we are basing these assumptions upon.

Okay okay, we admit it’s not all PRCs but why must they be like that?

Someone gave this analogy once:

‘Imagine you were back in high school, and this kid just transferred over from another state. This kid speaks loudly, dresses differently, doesn’t really socialise and more or less keeps to himself. The other kids don’t quite know how to gauge the newbie. There will be some who gang up and bully him for a number of reasons but it all boils downs to the fact that he is different. The kids who previously had issues with each other suddenly banded together against a ‘common enemy’. Yes, some of the things he does is totally unlike the kids in the class and that makes people uncomfortable, but the bullies aren’t that much better. No one really bothered to ask his story, ask about his family or even to find out his full name.’

This dude even wrote a long and heartfelt letter to the ambassador about what he felt was wrong about PRCs in Singapore and subtly suggested for action to be taken. A similar incident in Hong Kong even sparked a protest of sorts.

Of the many reasons, the one that stands out the clearest is a difference of cultural norms. Even between Malaysians and Singaporeans there are clear dissimilarities, what more a country as vast and varied as PRC. In fact, the Chinese government are taking steps to eradicate it, fully aware of how normal behaviour within their country could well seem out of place in other parts of the globe.

There is actually a 64-page Guidebook for Civilised Tourism!

As this article rightly says, ‘culture seems to be the problem, not pooping’.

Maybe there is a need for signs like these: 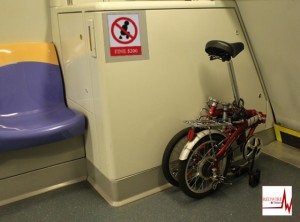 Probably wouldn’t work but it would give tourists a good giggle.

Is it time to put away those PRC-tinted glasses?

Sure, there is a high percentage of these abnormal incidents leading back to PRC nationals.

Yes, even the pooping incident that sparked this article could well be a lady from PRC. However, kicking them out of the country is hardly a feasible solution (be it for economic or political reasons).

For every party pooper (heh.), there could well be a happy hipster. (Not that we condone full-on hipsterism but it is better than leaving a trail of mocha-coloured destruction on the streets). For every megaphone-mimic on the MRT, there is a cat-saving Superman prowling the town. For every Lady Gaga-lookalike at the bus stop, there will be an aspiring fashion design student destined for big things.

Throw us out of our familiar territory and we would need time to adapt as well. Actions we find second nature to us could totally flabbergast (we love this word) people in a foreign land.

We aren’t asking for a big group hug here but the least we could do is offer consideration, context, benefit of the doubt or even a tissue paper next time we see a person squatting on the streets.

Whatever you do, try to avoid that Instagram button when you do see such an incident. We might be just be eating some Chocolate Molten Lava Cake when the photo comes up on screen. A massive thank you in advance. 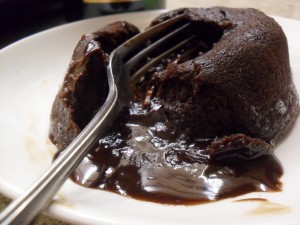 And… our appetite has left the building. Image from gwenskitchenscreations.blogspot.sg