Late last year, CILISOS was invited to go deep into the jungles of Ba’kelalan in Sarawak to help a bunch of volunteers bring solar light to remote villages without electricity. The solution is ingeniously simple. It’s a mini-car battery, connected to a solar panel that charges it during the day, and uses the stored energy to power 4 efficient LEDs and even charge two USB devices at the same time. These devices in particular were the result of a donation drive by YB Baru Bian (the tall guy with glasses in the middle of the featured image), Sarawak’s only Opposition ADUN (with PKR), in which 200 solar light sets were paid for by donations from the public, and distributed to 7 villages in the Ba’kelalan area.

COOL RIGHT!? But wait…  They’re just lights. How in the heck are they gonna change the face of East Malaysia?

You might be surprised which answer is actually the right one 😉 We’ll get to that later. Wow… that’s a big question. You might know some of the answers, but even we didn’t know all of them. On the surface… here it is…

What makes matters even more serious is that these small villages don’t realise how powerful their votes are. Ba’kelalan votes in Dewan Rakyat are worth almost 9 times what Kelana Jaya people’s (like CILISOS) .

How’s that work? Well… each seat in Dewan Rakyat has the same voting power – one seat in Parlimen.

This is what some people call Malapportionment (but we know they just invented that word to make people fail spelling tests). While there is some argument for less sparse locations having more voting power, many believe the ways the lines have been drawn is purely to favour the ruling government.

But what makes the villagers favour the ruling government in the first place?

The small world of a Lun Bawang village

The first village we visit is Long Toyo, a good two hours from the nearest town of Lawas. The road is barely a dirt track, bumpy like crazy and built primarily by logging companies (which is why ironically, logging trucks always have right of way). Given the inaccessibility, the last thing I expected when we arrived was this. They had the village band singing songs (with a conductor), and before we entered their town hall, the whole town was gathered outside to shake our hands! Puzzlingly they asked for my name, and where I was from (I guessed this was for the guestbook).

In his speech, YB Baru Bian talked about the solar lights and how they were to improve their lives, but strangely, it seemed reminiscent of Najib’s famous “You help me, I help you” speech.

And in exchange for these solar lights, YB and his entire contingent were rewarded with a royal meal of fish and more dishes than we could eat. During lunch, YB and his contingent were all presented with gifts. Also, they surprisingly later announced “CHAK from Petaling Jaya” to receive my very own hand-stitched cowboy hat as well (!). And yes, it was way too small for me

At this point, I realised something about these small villages. Back in the city, we always have this perception that villagers are silly for casting their votes to whoever gives them a token of money (so yes, correct poll answer was that the solar lights are for 3. Buying the votes of the villagers). But here’s the revelation, which is this writer’s own observation.

None of these Lun Bawang villagers have ever been to KL, much less have much concept of a democracy, or a country with a population of 30 million Malaysians. They don’t pay taxes, and have a much looser understanding of land ownership. To them, their lives are about the livelihood of their village. So whoever ‘gives’ to the village, wins its vote. Signing a bunch of papers means little to them.

But if that’s the case… then it should be easy for Baru Bian to win them over, right? Since he’s now the ADUN in charge of the area. He can build them roads or school and whatever right?

Malaysia’s Hardest Job: Being an Opposition Adun in a BN-controlled state Your STATE Assembly is like a mini-version of the Parlimen, where you discuss and vote with fellow ADUN’s on what policies to enact for your state.

So that’s why when you got problem with say… your bus-stop facing your drain, you complain to ADUN, so he can hopefully bring it up at the State Assembly, and get funds approved to repair it. Unfortunately, Baru Bian is part of the Opposition, which has even less influence in Sarawak than it does over the rest of Malaysia (only 15 out of 71 seats). This means that it’s almost impossible to get money from the state to repair anything.

“He earns only RM15,000 a month as an ADUN and gets zero grants from the government. So the only way we can do any good here is through generous donations” – Ching Sieu, Baru Bian’s wife. Yep. And the man’s got a family to take care of as well. This isn’t even accounting for that Ba’kelalan needs alot of things – power, proper water drainage, garbage disposal etc. And when you think about it, with the amount of money logging companies are making off their land… they should be getting a significant amount in return.

Of course, YB Baru is also one of East Malaysia’s top NCR (Native Customary Rights) lawyers, so he does earn a bit of money on the side…. However, with villagers being his main clients, he often gets paid in massive bundles of RM1 notes, totalling a much lower payday than your typical corporate gig. Are the villagers being well-compensated for their votes?

Despite being one of the few Opposition ADUN’s in Sarawak, sources close to YB Baru Bian tell us he was very disappointed when he didn’t win a coveted MP seat in the 2013 General Elections – where BN allegedly promised thousands of ringgit to the leaders of the villages to secure their votes.

In fact, in his book, The Long Awakening (msg his FB page for a copy!),he goes further into what years of indoctrination have done.

“Development is the only way “forward” and only the BN can provide development, the mantra goes. “Opposing” and “the Opposition” have been interpreted as dirty words almost.

Many simply could not comprehend that logging and land-clearing by private companies were done with the approval of the state, because they were clever in projecting a caring image. When native lands were encroached on, the tribes would cry out and the assemblyperson for their area would come by, accompanied by state agency officials pretending to look around with concern, or handing out emergency aid as temporary relief. Behind the natives’ backs, however, secret deals would be signed and village headmen bought over.” – Baru Bian in his book, “The Long Awakening”

However, things seem to be changing. The tribes of Sarawak are starting to demand more than just pre-election goodies. While the government has PROMISED power, and proper roads for them, so far… all they’ve received are:- Image of the hydroelectric dam at Kampung Keranggas, incomplete.

“For four years now it has become a white elephant. The wiring and the distribution cables are hanging lifelessly and an eyesore, not only to the villagers but also to visitors.” – Iban villager from Kampung Keranggas, Borneo Post, July 2015 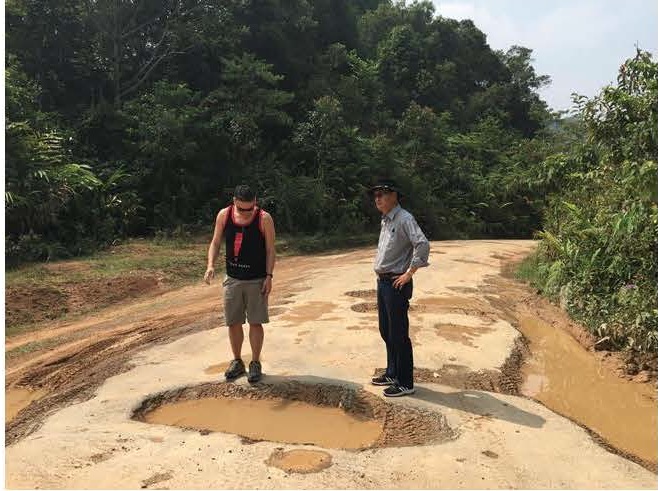 A photo of this writer next to the MASSIVE potholes on the road to Long Kerobokan, by Audrey Quay from Barubian.net

“We are not saying that the road is not good enough but the standard was not meant to cater for heavy vehicles,” – Minister of Social Development Tan Sri William Mawan, The Borneo Post, December 2015

The road, which was strangely built by the military (!?) is so bad that there’s a story that once, the Penghulu kampung himself literally fell off the back of the truck. His driver didn’t notice for a long time but thankfully another truck came up the road. When they saw the crumpled heap of the penghulu they thought it was a sack of something precious. In fact, the driver told his passenger that “if its sugar we split half-half“. The Penghulu was hospitalized for a week thankfully, no permanent damage done.

There are also frequent stories among the villagers of mini-hydro’s that fail after a few weeks, solar panels that never arrive, and new homes that are never built.  So while the government is in the best position to fix all the woes of Sarawakian tribes, they don’t currently seem to be doing a very good job of it. Which means if someone else can do a better job….

So yes, these lights really can make a difference lor Baru Bian with his signature badass cowboy hat, telling the villagers how the solar lights work

So in other words, YB Baru Bian’s simple tokens of solar lights, or mini hydros that actually work… actually work! The villagers we spoke to (many of them do speak Malay) spoke highly of Baru, with words like “ikhlas” and “orang baik” used often, which can’t hurt his chances for GE14.

In fact, he’s not the only one bringing infrastructure to the rural areas of East Malaysia – on our trip, we also saw other small donation-funded projects by DAP’s Impian Sabah & Sarawak and Barefoot Mercy are also installing various things like hydroelectric dams and solar panels, to supply electricity and other amenities to this communities.

Oh and FYI yes, this article was totally to bring awareness to their causes, which CILISOS would encourage you to at least donate to, or better still… volunteer for.

Instead of complaining about how rural folk are still in the dark, how about buying them a bit of light? Here are the links 🙂