Recently, an expert has warned beachgoers to be careful of box jellyfish as they were sighted near some islands off Kota Kinabalu where jellyfish had never been sighted before. OMG, are these jellies invading our sea again!?

Well, not really. Box jellyfish have always been in Malaysian waters, according to Prof. Dr Aileen Tan, Director of Cemacs, but not in significant numbers.

“…or I would say more to NOT been reported.  Few of my fisherman friends were teasing me “Why is the commotion now?  We have been stung so many times and had gone through so much pain” – Dr Aileen told CILISOS in 2017.

Unlike that case or another case where this jellyfish were sighted in Penang sometime in 2017, they are suspected to grow in numbers in Sabah over the next four months! Universiti Malaysia Sabah’s (UMS) Assoc Professor Dr B.A. Venmathi Maran together with his research team believed that the population of box jellyfish can be even bigger than the last time around. *gasps*

1. Our waters are getting warmer, and that makes jellyfish bonk more 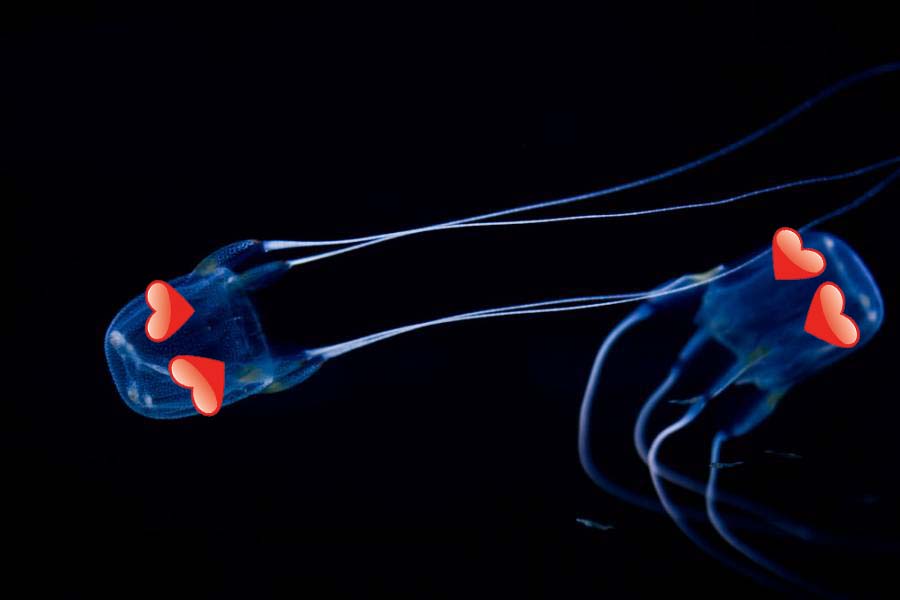 Love is in the air (or air if you read it in Malay). Unedited image from Two Oceans Aquarium

According to Dr Venmathi, our jelly friends will be experiencing an increasing rate of reproduction thanks to the current weather. But wasn’t there a report stating how dry spell is ending soon?

Well, yea but there may be other factors that cause the rate of reproduction to increase too. If ugaiz haven’t been following environmental news, you may have missed how the ocean is becoming warmer by day and that’s cos the global oceans may be absorbing 90% of the total heat from heat emitted to the Earth. This means that the Earth is more sensitive towards climate change and may respond more strongly to future greenhouse gas emission (carbon dioxide) than expected.

And our country may not be any different since it was reported that the temperature of Sabah waters are likely to increase over the next four months.

Sabah waters are expected to be the warmest in June (31.3°C). Screengrab from seatemperature.org

In addition, when we compare the temperature of Malaysian waters with Northern Australian waters (where this jellyfish are commonly found btw), we found some similarity…

The Malaysian waters have the same (warm)  temperature as the Northern Australian waters. Images from Sea Temperature

Having said that, UMS researchers may be right about the rate of reproduction of this jellyfish since they’re said to reproduce more in warmer waters.

2. This jellyfish eat more in acidic water than normal seawater!?

Thanks to the emission of carbon dioxide to the atmosphere, there is an ongoing decrease in the pH of the Earth’s oceans (ocean acidification). If ugaiz still remember your science lessons, you would know that lower pH value indicates acidity in a substance while higher pH value means alkali (or, in this case, basic). With this in mind, we shall continue with the story.

While acidic water may be a major threat to most marine life, it was reported that box jellyfish can survive in this state of water. But that’s not all. It was also said that this jellyfish eat more in acidic waters compared to normal waters. Researchers from the Utah State University found that box jellyfish, which feed on small animal prey like shrimps and crustacean, gobbled almost 83% of Copepods (a type of crustacean) in acidic water than normal seawater.

One of the researchers, Edd Hammill, suspected that acidic waters weaken the Copepods and that the jellyfish took advantage of this situation to feed. However,there may be other reasons to this.

“It could be the jellies are being negatively affected by the acidified water and are needing more prey to get along.” – Edd Hammill said, for New Scientist.

This is because the jellyfish didn’t have a competitor since they were the only predator in his experiment. But aside from competitor, the jellyfish seem to have an upper hand in acidic water since they can survive in it, feed more and have almost zero predator to eat them.

And this may be happening in Malaysian waters. We actually found a chart that may help you understand the state of the Malaysian waters back in 2011 (soz we couldn’t find the latest one) and it looks something like this:

The pH level of ocean in Malaysia. Screengrab from irdrinternational.org

But pollution and carbon dioxide aside, we may also be at fault for causing this jellyfish to swarm Malaysia. And that is because…

How can we talk about Sabah waters without mentioning its seafood?! (Ofcos we can’t!) SO. FRESH. Img from Star2

Sabah may be known for its seafood and seafood restaurants which are mostly located along the waterfronts in several districts including Kota Kinabalu. But the demands for seafood come at a price: overfishing (over extracting of fish stocks from the ocean). This can be done in various (and sometimes harmful) ways including illegal fishing and blast fishing.

While the fish industry strives to provide seafood to consumers with this action, overfishing can backfire when it leads to a decrease in catch. Aside from that, many marine ecologists argued that overfishing is one of the biggest threat to marine ecosystem since it is capable to disrupt the underwater food chain including box jellyfish’s food chain.

Earlier we mentioned that this jellyfish feed off small animal prey. But, hey, other bigger marine animals such as swordfish, red tuna and turtles feed off our jelly friends! And in this food chain, box jellyfish oftentimes have to compete with other animals like anchovies for food too. Remove these animals from the food chain (thanks to overfishing) and you’ll get… an overpopulation of box jellyfish!!

And we’re not simply saying things because this happened to the Black Sea sometime in 1982. The Black Sea was reportedly invaded by jellyfish after its ecosystem was weakened due to the overfishing of anchovies. By 1990, there were reportedly 900 million tons of jellyfish in the Black Sea!  😮 But these reasons are saying something waaaaaaaay bigger (and deeper) la.

Okay la, we get it. You may feel scared after hearing the growing population of box jellyfish because this jellyfish is said to be poisonous. They are able to kill humans within minutes, depending on the number of tentacles that come in contact with you. But fret not, there are steps to stop the stinging if you get sting by one of these jellies (choi!). One of it is by pouring vinegar to affected area. Follow these steps okies, ugaiz! Img from The Star

While the growth in box jellyfish population in Sabah may be worrying, especially for beachgoers, the reasons that allow this growth may be something Malaysians may want to ponder upon. Combine all those reasons for the growing population of this jellyfish (that we’ve mentioned earlier) together and you’ll eventually get… an unhealthy state of the ocean.

This may be why some scientists have this queasy sense that jellyfish just might be avengers from the deep, repaying all the insults we’ve heaped on the world’s oceans.

Err, mebe not by performing rituals like this. Gif from Gifer

But that aside, there have been several initiatives to tackle this problem. The Sabah govt, for instance, reportedly proposed a seasonal fishing ban that will help tackle overfishing. In addition, the govt has announced plastic straws ban in all Federal Territories last year.

And while all these may help make the ocean a better place, we may wanna do our part to save our oceans too.