When you die, do you ever wish you can turn into a ghost and see who turns up at your funeral, and maybe hear what people have to say about you? What if you don’t like the colour of the outfit you’re put in. Or maybe you prefer another coffin’s design. Don’t you wish you could’ve planned it out by yourself in the first place?

Like setting up a going-away party, except this goodbye is forever, funerals involve a lot planning. A lot depends on culture and which religion we practice, because each are catered to what the family thinks the deceased needs. If the deceased had many friends, it’ll need more drinks. If they were very religious, then need to burn more things. But how much should we really spend on the dead? Should we really put a price on their deaths?

There are many funeral planning services now to ease a grieving family’s burden. But were you ever curious about how much they charge for it? We may not like to delve in the thought of losing our loved ones, but there’s no harm in checking out how much it’ll cost right? Well, we did some digging, interviewed some people about their experiences with funerals, and looked at how much some of these funerals cost.

A fun fact before we put a price on our deaths. Micheal Jackson’s death was shocking to most parts of the world, but even the casket he was buried in wasn’t as costly as the one we have. Apparently, Malaysia is home to the second most expensive coffin in the world, The coffin by the Xian Ern Group is made out of hand-painted fine mahogany wood, lined with pure maroon velvet bedding, along with an adjustable headrest. Not only does it have a description like a MasterChef dish, it boasts a price tag of RM88,888. Just slightly higher than the RM80,000 casket the king of pop himself was buried in. The Lamborghini of coffins.

So, if you want to lay yourself to rest in this, better start saving up. But if you’d rather spend that money on something else, there’re definitely more economical ways to go. And depending on your beliefs, the expenses may go a long way.

So roughly how much do we need to save before we die?

Before we get into that, we looked into some procedures on what we should do if someone passes away. When death happens, call the police or an ambulance. According to Malaysian law, the body of the deceased should only be moved by authorized personnel to the hospital. After autopsy and verification of death, the family has to register the death at the hospital/police station within 7 days, by bringing along the I.C/passport and filling up this form (Daftar Kematian). Once that’s done, the family can proceed to contact a funeral service provider.

Some religions want the fastest possible burial, while others require honorable decor and multiple prayer sessions at a specific time of the day.

Because of our multi-ethnic population, we’ve categorize the costs according the top 4 religions in Malaysia (Islam, Buddhism, Christianity, and Hinduism) and mention a little about those who don’t practice any. We looked at some of the estimated figures Malaysians spend on funerals and also the rituals required that might’ve led to it.

Muslims prefer quick burials, and don’t usually have viewings of the deceased. If they passed away in the morning, they may already be buried by the afternoon. For Muslim funerals, the family contacts the nearest mosque for assistance from the Imam (a person who leads prayers at the mosque). After bathing and enshrouding (wrapping the body with white cloth) of the deceased, it’ll be brought to a mosque for prayers. For a deceased Muslim, cremation, embalming (preservation of a corpse), and application of cosmetics on the body are forbidden.

Charges for handling the body usually depend on the location of the mosques, because different mosques charge a different price. A mosque in Masjid Jamek (K.L.) charge a total of RM940, which includes the registration of death, renting the van, bathing, grave digging, and burial.

On the other hand, a mosque in Penang charged a very different price from the above, and went viral for it. For that particular mosque, hiring an Iman to read the Quran during the burial already cost RM1,900, and to read it in their home is a separate charge. In total, the whole funeral turned out to cost RM4,375. 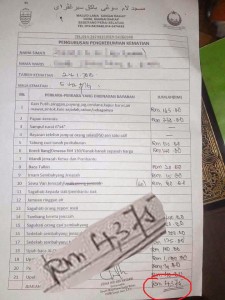 The receipt of the funeral arrangement

Because Muslims have assistance from mosque, and most mosques are strategically located near housing areas, we could hardly find a third party that arranges Muslim funerals.

For Hinduism, we interviewed a friend named Kavitha, and asked her about her experiences with handling her grandfather’s funeral. Like the Muslims, the Hindus also prefer burying their dead as soon as possible, and may choose to keep the body at home for a night at most. According to her, they do it fast because they believe the soul of the deceased are waiting to be sent off.

We wouldn’t want to keep the souls waiting right?

Cremation is allowed in Hinduism, and is mostly used by everyone so they could move on by reincarnation. Whereas burials are for children aged below 3 (because their souls aren’t attached to their body long enough) and saints (where Hindus believe visiting their graves gives them spiritual energy).

For her grandfather’s funeral, they spend an estimated RM3,000, which includes hiring a Hindu priest, setting up tents at home, transportation of the body, and the cremation. Aside from the funeral processions, on the 8th and 16th day after the funeral, family and friends gather for prayers. These gatherings include floral decorations on the picture of the deceased and vegetarian meals for the guests, and again a priest was hired to conduct the prayers. This required another estimated cost of RM2,000 on both days, which sums up to RM5,000 in the end. 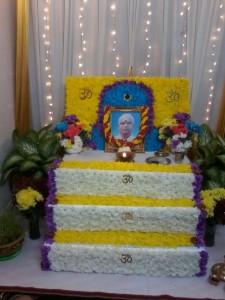 It’s no secret some Chinese funerals require a spectacle display of effigies and large amounts of ‘hell money’ to burn for the deceased. CILISOS even wrote about the funky things Chinese people burn for their ancestors. One of the many funky things

Unlike the funerals mentioned above, these Chinese funerals are a little more complicated because various branches of beliefs are being practiced in Malaysia. Before a person’s death, some practices believe that pre-booking a tomb or a columbarium (place to store urns) comes with blessings in the form of prosperity, luck, and longevity.

NAH, BACA:
Did our Health Ministry force its staff to donate to Banjir aid??

More commonly held at home, the funerals usually last for 2 nights. This is usually followed by a mourning period for 100 days, where family members of the deceased aren’t allowed to attend any celebratory events until the 100 days pass.

Another friend we interviewed was Darren, who just lost his grandmother and held a Buddhist funeral. He said they came up with more than Rm14,000 for the funeral. This writer had personally attended the funeral, and it includes hiring monks/nuns to conduct rituals, food catering (there was kuih and tea), and a complete set-up of chairs, tables, and tents (the venue held almost 70 people). And these didn’t include the cost for renting the columbarium yet.

Darren also said that his family found the offer to be cheaper than most, that’s why they took it. We looked into other funeral service providers, and found that Xiao Ern charges RM26,888 for 100 guests, and Nirvana charges RM30,800 for 60 guests.

Christian funerals in Malaysia are also held for 2 nights, but there aren’t as many rituals as the Buddhist funerals. But this writer is gonna describe his experience from his own grandparent’s funerals. Close friends and family helped a lot with the set-up (like getting the pianist and priest from our present church), hence saved up a margin of the costs. Also held at home, the priest came and had scripture readings, followed by people giving their eulogies. Families and friends of the deceased gather to sing hymns and pray, which happens twice a day. After the funeral procession, the bodies were brought to the crematorium and their ashes were scattered into the sea. Btw, Christians can opt for a burial or a cremation too.

The funeral was held some years ago and this writer’s parents couldn’t remember the exact amount it cost, but it was not more than RM10,000 at the time (the venue held more than 100 people) . Again, we compared a couple of sources for Christian funerals now and found that Xiao Ern charges RM20,888 for a 100 guests, and Nirvana charges RM21,800 for a 120 guests.

In Malaysia, we don’t usually see an atheist funeral being held. Even membership sign up forms or report cards ask for your religion. But that doesn’t mean that people without religious beliefs don’t exist here. Since there aren’t proper rites and customary to follow, atheist funerals are just held to commemorate and reflect the life of the deceased with non-religious eulogies.

There’s a package like this from Xiao Ern for Rm9,888. Renting their service hall for a night only, it includes everything from flowers, photos, and basic confectioneries, to transportation and caskets/urn. Cremation is included in the package, unless the deceased wanted to be buried, which will cost more.

And…that’s about it. There really isn’t a lot going on in an atheist funeral and we really couldn’t find anyone who has ever been to one.

Why dying also so expensive wan? 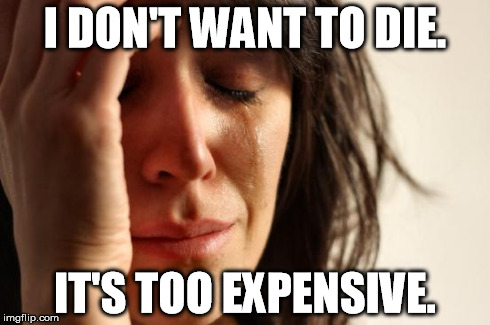 Work hard and save money to die lah

Clearly it’s understandable why some of these funerals need a lot money. Besides the services provided, we’d like to take a closer look at why they’re that much more expensive. According to The Malay Mail, it’s due to the decreasing amount of land in the Klang Valley. Because right now, as much as 80% of the public and private burial plots are occupied or booked.

To solve this land scarcity, some family members can rebury the dead. For those who chose/given a burial, they had to share a grave with as many as 2 other family members to save money. Prices of burial plots by Nirvana go up to RM24,800 for a single plot and tomb. And take note ah, this is the promotion price, got plans for 0% interest installment also.

And if you think that cremations are much cheaper, you’re gravely mistaken. Unless you wanna throw your ashes into a river or the sea, columbarium spaces can go up to RM9,800 for one slot. Unlike Darren’s grandparents, who bought a columbarium plot almost 24 years ago, and paid Rm1,000 then for 2 plots in the temple they now rest in.

What happens if nobody handles your funeral? Maybe can start planning now

Now nobody really wants that right?

For anyone who didn’t plan ahead or have no family to make funeral arrangements, there are protocols for hospitals to properly manage your body.

According to hospital regulations by the Ministry of Health, the release of unclaimed bodies will be referred to respective religious bodies/welfare organisations for non-Muslims to decide on whether to bury or cremate, whereas Muslims will be prepped for burial by the Islamic Religious Council. But if you think you recognize the deceased, make sure you claim it quickly because Muslims only have 3 days to do so, while non-Muslims have 2 weeks.

In the end, it really all boils down to how we want to go. We probably won’t feel so bad when there’s someone to send us off on the last journey of our lives right? As mentioned, funerals are like a going-away party. After the party, you’d want it to leave a lasting impression on some people right? And for funerals, maybe you’d want people to remember you by the good memories. Now that you  agak-agak know how much it all costs, we can all be well-prepared and to die.  😎