When we think of Malaysian war heroes, the first name that might come to mind is Leftenan Adenan. While they have been many great Malaysians who have distinguished themselves in the line of duty to defend king and country, there are so few others that we know about, much less if they come from East Malaysia.

So when the trailer of this new Malaysian action movie came out, it might also be the first time hearing about this guy…

Unless you had to read about him for your PMR, you might not have heard of Kanang Anak Langkau from the 8th Battalion of the Royal Ranger Regiment, and about how he became one of the most decorated war heroes in Malaysian military history.

Who is Kanang Anak Langkau? Image from the book “Kanang: The Story of a Hero”.

Kanang Anak Langkau was born on 2 March 1945 in Julau, Sarawak, where he was the grandson of an Iban headsman. Growing up in a remote part of Sarawak meant that a formal education was scarce, but Kanang was receiving a different kind of education as a child from his grandfather. Kanang would often follow his grandfather on hunting trips in the jungle where he was taught to read the signs of plants, the sounds of the animals, the smells in the wind, and the ways of becoming a tracker.

By 1961, Kanang signed up to join the Sarawak Rangers, which was a British military force originally formed by the Brookes that became Sarawak’s standing army in World War II. After Malaysia was formed in 1963, the Sarawak Rangers were absorbed as part of the Malaysian military, forming the Royal Ranger Regiment of today, where Kanang was attached to its 8th Battalion.

Kanang was trained by the Gurkhas in Singapore and then attended the Jungle Warfare School in Ulu Tiram, Johor. During his training, Kanang saw action during the Brunei Revolt and the Indonesian Confrontation in the 1960s, but his greatest deed was yet to come until he was fighting with communist insurgents during the 1980s.

Wait. There were communists in the ’80s? Image from a scene in Kanang Anak Langkau: The Iban Warrior. Image from Tangan Seni.

You may get confused if you remember that your Sejarah (or if you read this CILISOS article) taught you that the Malayan Communist Party (MCP) were around in the 1940s to fight the British during the Malayan Emergency.

But actually from 1968 to 1989, there was a Second Malayan Emergency when the MCP had started a new insurgency to fight against the newly formed Malaysian government.

However, unlike the first Malayan Emergency, the MCP was fighting a losing war by the 1980s due to many factors, including the lack of support from the communist government in China after it formed diplomatic ties with Malaysia, and the Vietnam War, meaning that the MCP was not getting any support from them. Things got worse when there was infighting among the factions in the MCP, so their combat capabilities were greatly reduced. Malaysia and China formed diplomatic ties in 1974. Image from TheStar.

Still, the guerrilla tactics used by the MCP insurgent was still damaging, and they were very elusive when they retreated back to the jungle. Then on 8 February 1980, a private from the 25th battalion of the Royal Malay Regiment had just finished his sentry duty when insurgents attacked. Private Abu bin Abd Rahman was shot in the head and killed in that attack. Image from a scene in “Kanang Anak Langkau: The Iban Warrior”. Image from Tangan Seni.

Following the attack on the 25th battalion of the Royal Malay Army, Kanang’s platoon under the command of 1st Lieutenant Johnson Anak Meling was deployed. Their mission was to search and destroy the insurgents that had infiltrated Tanah Hitam, Perak. They were expected to hunt a force of about a dozen insurgents. Already a sergeant by then, Kanang was the lead tracker of the unit alongside platoon mate Corporal Nasir Nordin. Being the lead tracker meant that Kanang would be the first in the line of fire should any firefight happen.

As Kanang’s platoon entered the jungles at Tanah Hitam and started tracking the insurgents, for days they were following trails and avoiding landmines left behind by the insurgents. Although two men in the platoon were taken out of action from landmines, the trails led to the insurgents’ resting areas that were empty or left behind.

Then one night, Kanang had a dream that he and Corporal Nasir were being pelted with feces and clay by some children in the jungle that could not be washed off. When Kanang awoke, he took the dream as a bad omen and warned Nasir to be careful on the next day.

On 19 Februrary 1980, Kanang and Nasir were leading the platoon around a hill, when they found a communication cord usually used by insurgent sentries to alert their main camp. Kanang knew that their target was nearby and continue to trek cautiously. At nearly 3pm, Kanang and Nasir found another wire that was connected to a landmine. Before Kanang could disarm it, shots were suddenly fired at them.

Nasir was dropped by the hail of bullets. After taking cover, Kanang called out to the rest of the platoon that they were being fired from their right, and a battle ensued. Not long after, the platoon soon found themselves being flanked on the left by the main force of the insurgents that had increased by 20 more insurgents.

Under heavy fire and outnumbered, Kanang had taken shots since he was in front of the platoon. Despite his wounds, Kanang would constantly shout these words to his comrades:

This was a famous Iban war cry meaning “Still alive, still fighting”. It is famously associated with the legendary Iban warrior Rentap, who was renowned for his great bravery in defying the Brooke family until his death. It was also used as the motto of the Royal Ranger Regiment.

With fierce determination, Kanang’s platoon managed to push the insurgents into a retreat, but while trying to pull Nasir away from fire, Kanang sustained three shots to his abdomen and was bleeding profusely. He had almost lost consciousness by the time the platoon medic reached him for medical assistance. Kanang was extracted from the battlefield, and Operation Dragnet ended a few days later with the death of 5 insurgents and numerous equipment seized.

Kanang was sent to the Ipoh Hospital by helicopter where he slipped between life and death for days, before finally recuperating after a year. For his bravery in combat at Tanah Hitam, Kanang was nominated and awarded with the Pingat Gagah Berani on 7 June 1987 and the Seri Pahlawan Gagah Perkasa on 3 June 1981; the two highest awards of gallantry that can be conferred by the Malaysian government. Kanang was the sole surviving recipient of both awards in Malaysian military history. By 1989, the Second Malayan Emergency ended with the Peace Agreement of Hat Yai. Image from the book “Kanang: The Story of a Hero”. 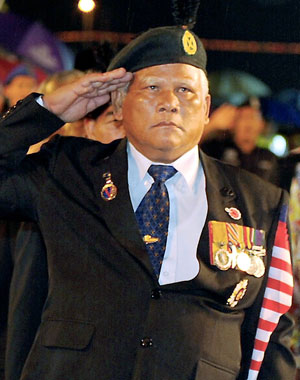 Kanang Anak Langkau in his later years. Image from The Borneo Post.

Kanang was promoted to Warrant Officer I before he retired in 1983 after 21 years of military service. In his home state, Kanang was given the title of Temenggong of the Iban community in the Sri Aman district, and later a Datukship by the state government. Kanang did not leave public attention after his retirement, making headlines once again for saving a baby Orang Utan in 2009, and then supervising the relocation of 21 Iban trackers and Sarawak Rangers remains who died during the Second Malayan Emergency and buried in West Malaysia to be reburied in Sarawak in 2011.

Kanang died from a heart attack on 3 January 2013 at his home at the age of 68. He was given a funeral with full military honours and is now buried at the Heroes’ Grave in Kuching. And now you get to see his life in cinemas Now that you know the deed of Kanang Anak Langkau, you can now see his story unfold on the bigscreen in “Kanang Anak Langkau: Iban Warrior”. Produced by Tangan Seni and directed by Badaruddin Haji Azmi, Kanang’s own son Langgi Anak Kanang, who is also a soldier, takes the role of his late father. It is currently showing in cinemas now and is already in its last week of its Wajib Tayang (and if you want to know why it’s so urgent to watch a Malaysian movie during its first two weeks, read this)

If the story of Kanang Anak Langkau isn’t about the bravery of one soldier defending the peace of our country, it’s the story that patriots can come from anywhere. Whether from the east or west, Kanang was willing to live and die for Malaysia as a Malaysian, and that’s the spirit he demonstrated to us that unites us as Malaysians, rather than being divided by our race or religion.

So instead of going to see “Power Rangers” for the third time this week, maybe it’s worth spending some time to know more about this great Malaysian war hero. 🙂

Writer’s Note: Information of Kanang were found in The Borneo Post and New Strait Times. Details of Operation Dragnet were taken from the book “Kanang: The Story of a Hero“, along with detailed descriptions in blog posts from here.