If you’ve been following the news in the past few days, you may have heard the name “Jack Ma” (the boss of that super big company, Alibaba), and the term “Digital Free Trade Zone” being thrown around a lot. That’s because Jack Ma was recently in Malaysia for the launch of Malaysia’s Digital Free Trade Zone, an idea that he himself advised the Malaysian gomen to implement. 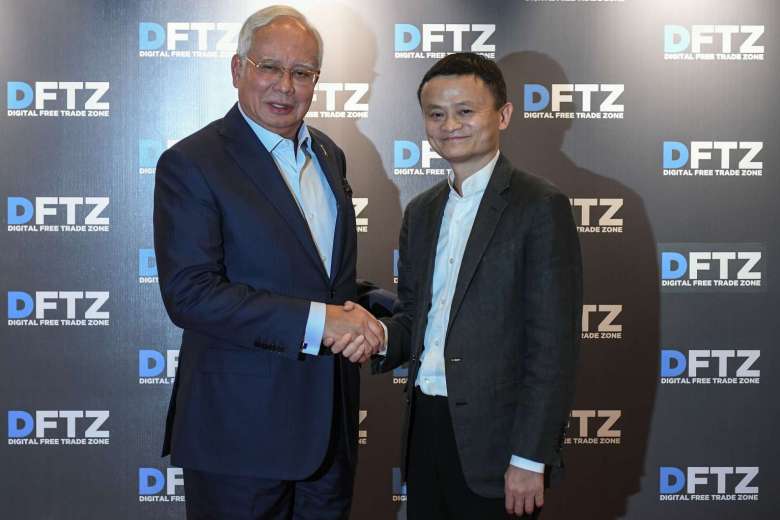 PM Najib and Jack Ma at the launch of the Digital Free Trade Zone. Image from Straits Times.

We’ll bet that the sentence above probably did not generate a lot of enthusiasm in you reading this. But the thing is, many other people are wagging, or will be wagging, their digital tails over this. Because this thing is so big that even Jack Ma himself didn’t think that we’d be able to pull this off so soon.

To be honest, before the launch, we knew this was a pretty big thing, but just how big we didn’t know. And so if you feel the same way, join us as we take a look at just how big a deal the new Digital Free Trade Zone is. But before that, we first need to understand the magnitude of something else which is…

Just how big of a deal is Jack Ma and Alibaba?

For those of you who don’t know Jack Ma, he’s the boss of Alibaba Group, one of the biggest companies in the world. Here’s one way to put the company’s size into perspective: it’s said to be bigger than eBay and Amazon put together!

But what exactly does Alibaba do until it got so big anyway? Well, the company’s history goes all the way back to 1999 when Jack Ma and 17 other people established Alibaba.com, an online wholesale marketplace (more on business to business stuff). But nearly 2 decades on, the company has . In fact, for Alibaba’s Singles’ Day last year (a big megasales kind of day which they have on the 11th of November every year), their total sales for just that one day beat the sales of companies like Facebook for the whole year! And even more than the GDP of some countries! Image from qz.com

And they don’t just sell stuff online. They’ve actually grown into such a diverse business that it’s crazy. From stuff like technology that lets people pay using their phones, to journalism, to movies! And they’ve been a part of big movies like Mission Impossible: Rogue Nation, and Star Trek: Beyond!

And speaking of nations, they’ve also started to expand their presence to other countries like Australia, New Zealand, India, and Europe, by making London the center of their operations there. That actually brings us to Malaysia. It seems that Jack Ma had recently set his sights on Malaysia and Southeast Asia.

About a year ago, Alibaba actually purchased Lazada in Southeast Asia for US$ 1 billion

“It has huge cash sitting on its balance sheet so it can do this kind of investment (buying Lazada). It’s also seeking future growth drivers. It needs to find some other place for future growth.” – Marie Sun, analyst at Morningstar Investment Service, as quoted by Bloomberg

But they didn’t stop there. We’re not sure if it was mere coincidence or a well-executed plan that our PM Najib took notice of him and appointed him as advisor for our digital economy last year. And Jack Ma wasted no time in getting our gomen to work on something that could change the whole business scene of Malaysia: by getting our gomen to build a Digital Free Trade Zone! Yes we understand we’ve said the name a few times yet not explained what in the world it is, so let’s try to understand what’s the big deal with the Digital Free Trade Zone.

The DFTZ is supposed to bring in billions of Ringgit, and create tens of thousands of jobs To be exact, it’s expected to generate RM286 billion by 2025 AND create more than 60,000 jobs in Malaysia both directly and indirectly, well at least according to the Malaysian Digital Economy Corporation (one of the main companies working with Alibaba on the DFTZ). But how in the world is it gonna bring in all this money and jobs?

As we’ve mentioned the DFTZ is meant to help Small-Medium Enterprises (SMEs, which are basically businesses that are below a certain threshold), which is a pretty big part of the Malaysian economy since 97% of all businesses in Malaysia are SMEs. The World Bank adds that they account for about:

What defines an SME. Image from eCommerceMilo.

“In terms of numbers, SMEs are significant, and they form the backbone of Malaysia’s economy.” – Dato Hafsah Hashim, chief executive of SME Corporation Malaysia, as quoted by The World Bank

According to MDEC, the DFTZ is expected to “double the growth rate of Malaysian SMEs’ goods export by 2025”, while PM Najib said during the launch of the DFTZ that the SMEs could raise their GDP contributions by 60-80%. And as mentioned earlier, they are doing so by making it easier for SMEs to do businesses online.

By pushing for this DFTZ – the first e-free trade zone outside China – Malaysia can herd SMEs, micro businesses, warehousing facilities and logistics firms into one place, and increase trade with the world. – Columnist Ho Wai Foon, in an article on The Star

And the country is already starting to see the effects of the DFTZ. Since its launch, the stocks of companies involved in the DFTZ have all gone up. But all of this still may seem a little difficult to comprehend because it involves so many big numbers right? Well, let’s look at how it will affect the SMEs in general.

So first and foremost, the Digital Free Trade Zone (DFTZ) is an actual physical location. It will be located within the KLIA aeropolis, which is basically the land area surrounding our two main airports. And that’s why it was a bit difficult initially for us to understand what the DFTZ was because it was a digital/online thing, but with a physical location. In fact, here’s how a gomen official described how it can affect a small trader.

“For instance, a trader in Kota Belud would have an equal opportunity to market or sell his items, as a trader from the Klang Valley. This is the future of the digital economy.” – Dato’ Rahman Dahlan, Minister in the Prime Minister’s Department in charge of the Economic Planning Unit, as quoted by TODAY

But how is that going to work exactly? Well, that’s where Alibaba’s expertise comes in. Being a company that has a lot of experience dealing with selling stuff in general, the first phase of building the DFTZ would involve the gomen working with Alibaba to build an eFulfillment Hub and Satellite Services Hub. And what these basically do is make it easier for traders to sell their things by providing services like:

And that is how someone from one end of Malaysia will have no problem competing with someone right in the center of KL, simply because even if their office is in Perlis, everything else that they need to sell their stuff is right there in the DFTZ! And that’s not all, there will soon be also smaller versions of DFTZs across Malaysia (called satellite service hubs).

In other words, our gomen will be…. And while many of us may feel that word and Malaysian gomen shouldn’t ever be mentioned in the same sentence, they’ve already surprised Jack Ma himself.

“Malaysia is very business-friendly and much more efficient than I thought.

My team and I thought – is four months possible? We have been discussing it with many European and Asean countries.” – Jack Ma, as quoted by The Star

But the gomen made it happen. And if you’re  wondering why in the world did they move at the breakneck speed that is usually only reserved for General Elections (which could actually be near btw), remember we mentioned earlier that it’s going to bring in a heck of a lot of money.

And with all that is being said, this may just sound a little too good to be true right?

Wow, this whole thing is a huge durian runtuh for Malaysia right?

Although we still don’t have all the details about this new project (the gomen has said that more details will be released in April), the DFTZ looks like a really big money maker, especially when one of the biggest companies in the world is behind it. 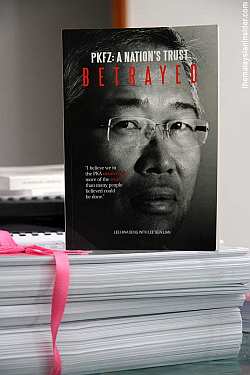 There’s even a book written about the PKFZ scandal. Image from Malaysia Today.

But perhaps one thing we do have to consider is our track record with big projects. The term “free trade zone” may trigger some negative memories in some of you, and that’s because of the Port Klang Free Zone (PKFZ) scandal. Without going into the details, the PKFZ was a project to turn Port Klang into a place with a lot of business benefits (similar to the ones stated in the DFTZ). And although it’s running now, it was reported that the scandal surrounding it may have cost Malaysia RM12 billion. And that’s not even the worst part because just a few weeks ago, the scandal ended with no one being convicted for any crime.

And if that still isn’t enough for you, there’s actually a Wikipedia page about scandals in Malaysia.

Of course we don’t mean to say that the DFTZ will turn out the same way as these other projects did, and of course we hope that it will be as good as our gomen claims it to be. But given our track record with big projects isn’t the best, perhaps it’s still too early to tell if the DFTZ will be a success or not.

Buttttt at the very least, this time round one of the most successful people in the world is involved. We’ve already mentioned all the successes of Alibaba, so hopefully he will be able to translate that success to the DFTZ.