If you’ve been following the US Presidential Election, you would have heard that Donald Trump announced that if he were to become president, he would build a wall between the borders of the USA and Mexico, and make Mexico pay for it. It’s still a hot topic of conversation in the US, but it doesn’t seem very relevant to us here in Malaysia doesn’t it?

Well how about this then, Malaysia may soon be replicating what Trump proposed, by building a wall along the border of Malaysia and Thailand! Understandably, some of you may already be screaming the following question in your heads:

Why da heck do Malaysia and Thailand want a wall???

Unlike Trump whose main concern is to stop Mexican immigrants from crossing into America, Malaysia and Thailand have been discussing a wall to combat some pretty serious problems.

“We both face security issues including the fight against terrorism, human-trafficking and illegal smuggling, that is why we need to address these issues seriously.” – Thai Prime Minister, Prayut Chan-o-cha, as quoted by South China Morning Post

We’ll try to break down all 3:

First off, no, it’s not ISIS. They play no part in us wanting to build a wall. We’re actually talking about the South Thailand Insurgency. Destruction from bomb blast in Southern Thailand in 2012. Image from CNN.

The South Thailand Insurgency is a rebellion that’s been going on for longer than Malaysia (or Malaya) has been around, 1948 to be exact.

In a nutshell, the insurgency is an ongoing conflict between the Thai gomen and the southern region’s Malay Muslim community. Since 1948, they have been demanding for the southern regions to be allowed to govern themselves, and not be required to follow the culture of the rest of Thailand.

And it’s not just their name that sounds really familiar to something Malaysia has. Check out their flag. Image from Wikipedia.

But recently their acts of terror have been increasing. It’s been reported that in the last decade, they’ve killed 6,500 and wounded another 12,000, and it’s been difficult for the Thai gomen to negotiate with them because there are at least 6 different groups of insurgents. (Fun fact: The most prominent of the groups is the Barisan Revolusi Nasional (BRN)).

And according to a group that monitors terrorist activities, the Thai gomen has claimed that because the Malaysia-Thai border is so easy to pass through, many of the insurgents would run to Malaysia after launching attacks in Thailand. A wall on the other hand, would make it a lot more difficult for the insurgents to do so because right now they can just cut through the fence.

Remember sometime last year when the whole of Malaysia was shook by the news that 139 mass graves had been found near the border of Malaysia-Thailand? These graves were believed to belong to Rohingya refugees who were trying to get to Malaysia. The Rohingyas are a people group from Myanmar who have been persecuted by their gomen, and thus many have tried to flee to Malaysia only to end up in the hands of human traffickers.

But why is Thailand involved? Well, because the route to Malaysia involves going past the Malaysia-Thai border. According to Amnesty International, the Rohingyas are either abducted or tricked into believing they would be given safe passage to Malaysia. And once they are in the hands of traffickers, they would contact the family members of the Rohingya to demand ransom for their release into Malaysia. If no ransom paid? They kill the Rohingyas.

And while Thailand has started to crackdown on the sea-routes of these traffickers, it is believed a wall along the Malaysia-Thailand border would help to stem these activities as well.

It’s apparently really easy to smuggle stuff across the Malaysia-Thailand border, at least according to the testimony of a former drug dealer. He mentions that drugs and gun components were hidden in fruits and vegetables.

It’s been reported that many other things get smuggled across the border including: 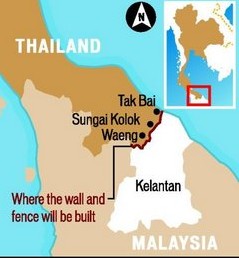 Back then they planned to build a fence but for only part of the border (121 km). Original image from bangkokpost.com

Also just to be clear, it’s not like the leaders of Malaysia and Thailand suddenly decided that they wanted to build a wall. There are fences along certain parts of the border which have been built over the past few decades, possibly as far back as the 1970’s. But in more recent times, discussions of news of constructing a long barrier of sorts came about in 2013 when our gomen said that they were looking to build a 121km electric fence along the Malaysia-Thailand border at Kelantan.

But what’s happened since then? Well, it’s been going back and forth, until the latest development a few days ago when leaders of both countries agreed to improve their cooperation on border security, and consider building a wall. But the thing is, they haven’t decided on how tall, thick, or long the wall will be.

“The matter is under consideration, but we need to determine the physical dimensions of the wall or fence as well as the sharing of the costs.” – PM Najib, as quoted by South China Morning Post

… is it EVEN POSSIBLE to build a wall along the wholeeee border?!

Well considering China built a really long wall once, the short answer is probably yes. But the great wall of China is probably not a good example to compare it to because the monster of a wall was constructed over 2 thousand years. And so we thought we’d try to estimate the cost of our wall based on 2 more popular modern walls: The Berlin Wall and Trump’s Mexico Wall.

Just to be clear, these are very rough estimates because we assume the dimensions and cost of workmanship are the same as the walls below, and that the length is as long as our whole land border: 551 km.

a) The Berlin Wall The Berlin Wall. Image from Wikipedia.

The Berlin Wall  was 155km long and is made up of different sections consisting of concrete, fences, trenches, and other stuff (but it’s actually been torn down). Out of the 155km, 106 km was concrete. And CNBC reports that back it was built in 1961, the wall cost USD 25 million to build, or USD 200 million when adjusted to inflation.

If we count cost by km, very, a very rough estimate would show that the cost of our wall would be close to USD 600 million (RM2.48 billion) by today’s standards. These are still really rough estimates, but they are estimates which show our wall can cost billions of Ringgit to construct. Meaning a wall is not going to come cheap. But perhaps the costs are worth it?

Will a wall help solve Malaysia’s and Thailand’s problems?

Border walls or fences are not new. It’s reported that at least 65 countries have some sort of barrier along some or all parts their border. The Israeli West Bank Barrier is pretty long too (but only a small fraction is made up of huge concrete slabs like these). Image from dailymail.co.uk

But while walls in general have gone some extent in achieving their aims of keeping people from crossing borders illegally, they too are limited at fully solving the problems.

“Migrants would still find alternative outlets by sea and through corruption, loopholes and border trade along the wall. The ultimate efficacy of such a wall is doubtful.” – Director of the Institute of Security and International Studies at Chulalongkorn University, Thitinan Pongsudhirak, as quoted by Forbes

Ironically enough, the best solution could be to open ourselves up more (for discussions and information sharing) with our neighbours rather than walling ourselves up. A professor from Canada instead mentions that real border control come from “the slow, exhaustive work of building ties and sharing information with other countries“. And surprisingly, when PM Najib met with the PM of Thailand a few days ago, they actually agreed to share more information with each other. This is commendable because while it sounds like a very simple thing to do, information sharing is actually quite a difficult issue to approach, especially in places like Europe where they’ve been trying to agree to share information for years!

And if that’s the case, hopefully both countries will figure out how to stop all these illegal border activities without having to resort to a very costly wall.