[Update 12/3/2018: Firefighter Abu Zarin Hussin has passed away today due to a snake bite from a cobra while on duty in Bentong. Condolences to our local mini-celebrity, and may he rest in peace.]

So, British tabloids The Daily Mirror and The Daily Mail, as well as Internet portals from around the world are going crazy over this Malaysian guy who “MARRIED” his pet snake! You have to see these romantic photos of them together: 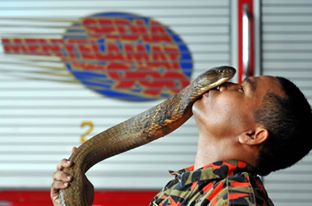 Bring your wife to work day Don’t they make a cute couple?

But actually…the story is FAKE! Screenshot from The Star’s article

Before the authorities go breaking down any doors, NO, this guy DID NOT marry a snake!! He’s actually upset that people are spreading this FAKE story. \(O.O)/

Kelantanese firefighter Abu Zarin Hussin got a shock when he learnt that the British tabloids and Internet portals mistakenly claimed that he is Warranan Sarasalin, some Thai man who married his pet snake because it bears a “striking resemblance” to his dead girlfriend and that he was inspired by Buddhism that people are reincarnated as animals.

What the heck?! Dahlah got his marital status wrong, nationality and religion pun salah. Needless to say, he was not thrilled. ಠ_ಠ

“I just want to express my disappointment over the attitude of a handful of foreign journalists who acted in clear violation of journalistic ethics in publishing the news, especially since the pictures were clearly taken from my Facebook account.” – Abu Zarin told The Star Online

At this time of writing, Mirror has taken down the story, but it’s still up on Daily Mail.

Although he didn’t actually marry a snake, he is in LOVE with snakesss!

Oiiiii not in a romantic way la, we’ve established that. Abu Zarin, 31, who works at the Temerloh, Pahang fire station, is the Bomba “snake whisperer”.

“Catching snakes are part of a fireman’s duty. I am training other firemen how to handle and manage snakes. So that after they are caught, we can release them back into their natural habitat.” – Abu Zarin

This is mainly so that firemen can learn the different species of snakes, especially the venomous ones and their bites, and how to catch them without killing them. But he doesn’t keep the same snake for very long la, never more than a year. In fact, the snakes you see in the photos above may not be the same one. According to The Star, he currently has four snakes under his care. When a new snake arrives, he will release the previous ones into the wild.

To check out more of his work with snakes, check out his Facebook page Wira Penyelamat.

Before he joined the Bomba however, he was actually AFRAID of snakes! Which might be surprising coz his old man is a snake charmer. Not that it was Post-Traumatic Stress Disorder after being stuck on a plane full of snakes, or anything…it’s just that he just never discovered this talent until he joined the Bomba and started training with snakes in 2007. And yeah, he practises handling snakes with his dad. Well, good for him that he found his true calling.

NAH, BACA:
7 things a Malaysian should know about marrying a Vietnamese wife Sorry, this class is not open to the public 🙁 By teach them, we meant for his fellow Bomba colleagues, coz it’s part of their job so whenever they get a call from the public. The Bomba’s job is not only to put out fires and look hot in their calendars y’know. 😛  They also rescue flood and other natural disaster victims, and (yuckkk), extracting dead bodies. “Even when a ball gets stuck, they call Bomba,” a firefighter Hernazila Ali, 26, told AsiaOne.

Besides that, they also rescue kittehs, puppehs, snakes and other random animals. Hernazila once got a call about a snake which turned out to be a shoelace. The caller couldn’t see clearly coz he didn’t on the lights! 😆 Once, a man told the police that snakes attacked and dented his car. It turned out that they were horses and he just didn’t know the correct BM word for snake. While anyone would be more than happy to rescue a kitten or puppy, they might hesitate when it comes to snakes.

“Snakes are really not difficult to handle. There are many false claims out there about snakes – that they are vicious or attack people.” – Abu Zarin Ehh, but that’s just Abu Zarin’s opinion! You are still not advised to tackle a snake if you come across one. In case you’re wondering, Abu Zarin HAS been bitten before. Photos of his bite marks and surgery are on his FB page.

So what should you do if you see a snake?

Stay calm and don’t provoke it! Try identifying if the snake is venomous. If you are unsure, just assume that it is dangerous, says Malaysian Civil Defence Department (JPAM) Disaster Management and Operations Lieutenant Colonel Mohd Azhar Mujab.

“Venomous snakes such as the cobra, king cobra, Malayan krait and vipers can kill in an instant so we need to be alert with our surroundings.” – Mohamad Sani Harul, Selangor Fire and Rescue Department Assistant Director of Operations, The Star You’re advised not to try and handle it yourself, but call for help instead, according to Head of Kuala Krai Department of Civil Defence Muhamad Hanif Omar. 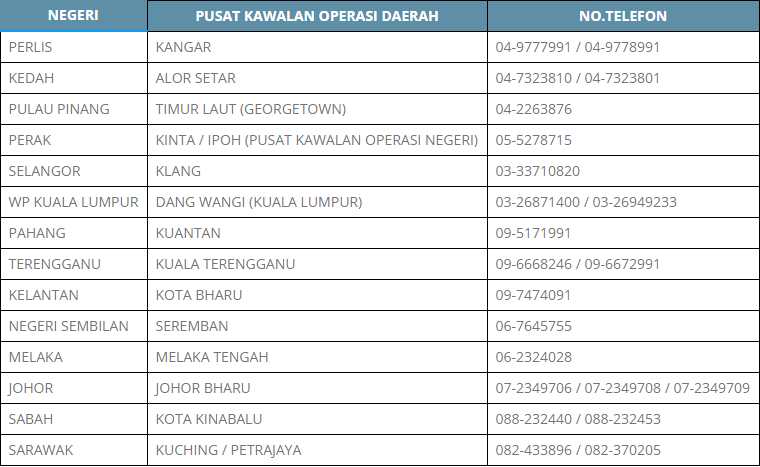 When there is a snake in your neighbourhood. Who ya gonna call?

One tip is to be especially alert during HOT SPELLS because snakes will look for cool places to hide, like underneath cupboards and chairs, as well as the kitchen and toilet. During the El Nino season, an alarming number of snakes were caught – 3,780 cases recorded in March and 3,708 cases in February nationwide by the JPAM, while Bomba recorded 973 cases in March and 899 cases in February.

“In the event of a snake-bite, it is important to document the case carefully, especially a description of the snake, in order to determine whether it is venomous or not. A photograph, even one taken with a mobile phone is of great help.” – Prof Dr Indraneil Das, Universiti Malaysia Sarawak (Unimas) Herpetologist, The Star

On top of that, we can minimize encounters if we clear up fallen logs, abandoned huts, garages, tongs, overgrown bushes or any place that a snake could hide in. Be careful, especially if your children like to play outdoors.

Even though Abu Zarin can handle snakes like a boss, we shouldn’t try to do the same. Better leave it to the Bomba. Ssstay ssssafe y’all!