Just imagining hundreds of rats squirming out of an open drain may be enough to put some Malaysians in a panic, but to others, it may sound like that krrrrrr sound the ATM machine makes before spitting out money. Apparently, you can sell the rats you’ve caught (got terms and conditions, more on that later) to your local authorities, and soon, maybe use it to pay rent. You wouldn’t think there’d be a stock image for it, yet… Img from the Jakarta Post.

We’re talking about a suggestion from Dr Shahruddin Md Salleh, the Deputy Federal Territories Minister, who thinks that PPR (Projek Perumahan Rakyat) residents can subsidize the RM124 rental for their low-cost flats by catching rats in the future.

“(Providing a reward in the form of) a rebate for residents to pay their monthly house payments (is interesting). However, this is (only) my opinion. I will have a meeting with City Hall (DBKL) about the idea, as well to discuss other effective techniques for such a programme,” – Datuk Dr Shahruddin Md Salleh, Deputy Federal Territories Minister, to NST.

Who’d guess rats can be so lucrative? The usual going rate for a rat in KL is around RM3, so if the idea becomes a reality, some PPR residents may disregard their rent by catching around 42 rats every month. Times that by the number of units in a typical PPR block, and one might wonder: will there be enough rats for everyone? Well, as it turns out…

There are probably more rats than people in KL Shocking! Img from the Star.

While authorities often overestimate rat populations, the Kuala Lumpur City Hall (DBKL) had estimated the number of rats in KL to be 6.8 million… in 2013. That would mean that back then, there were 4 rats for each person in KL, but the number was estimated to grow by two percent every year, so from that KL may now have 7.5 million rats. Although wild rats typically don’t survive more than a year, within that time they can seriously multiply.

A female rat is only pregnant for about three weeks, after which they give birth to a litter of up to 15 babies at once. They can repeat the cycle for up to 15 times a year. Each of those baby rats can theoretically multiply as well as their mother, so you can perhaps imagine how many rats will there be after some time. If you can’t, here’s a gif:

But their ability to kage bunshin no jutsu themselves isn’t the scariest thing about them. In Malaysia, most rats found in cities are either black rats (Rattus rattus) or brown rats (Rattus norvegicus). Although on their own, rats are pretty harmless, they act like Ubers to a host of parasites and bacteria. A 2012 study found that most rats caught in KL have at least one type of helminth (a type of parasitic worm) in them, and at least two types can potentially infect humans. Rats had been known to carry fleas, the Hantavirus, salmonella, cause fevers with their bites, dirtying up food with their fur, pee and droppings, and perhaps most famously, leptospirosis.

In KL, the areas most known for rats are wet markets, particularly the ones in Chow Kit, Pudu, Sentul, Keramat and Selayang, but supposedly affluent areas like the commercial center of Desa Sri Hartamas can have rat problems as well. The DBKL tried to curb this problem, but although they frequently ran rat operations, catching about 6,000 rats a month, those barely left a scratch on the rat population. The stray cats at the markets aren’t much help (healthy adult rats can overcome cats), and using poisons would affect the food sold there.

To make matters seem even more hopeless, it was said that there were only 24 staff assigned to handle the rat problem. What are they to do? Well, subcontract, of course.

Rat catching campaigns were held, but it was slow going Number of rats caught through the campaign. Img from Astro Awani.

With a view to keep rat-borne leptospirosis in check, in 2008 the DBKL started a series of campaigns where they put a bounty of RM1 for each rat caught within a specific time and place, usually near markets. Rats caught outside those times and places were not rewarded, and the rats caught were bleached in chloroform and burned. The target had been 50,000 rats caught a year, and accordingly they have allocated RM50,000 for the reward.

However, the amount of rats caught each year did not even came close to that. In 2008, only 16,694 rats were collected, and although the number reached a record high in 2011 (17,230), in 2013 only 8,760 rats were collected. The allocation for exterminating rats with the public’s help had never been fully utilized, so in 2015 the bounty was increased to RM3 per rat. The rat bounty campaigns was also held by other city councils and resident committees, like in Petaling Jaya, Ampang Jaya, Shah Alam and even as far as Lipis in Pahang. 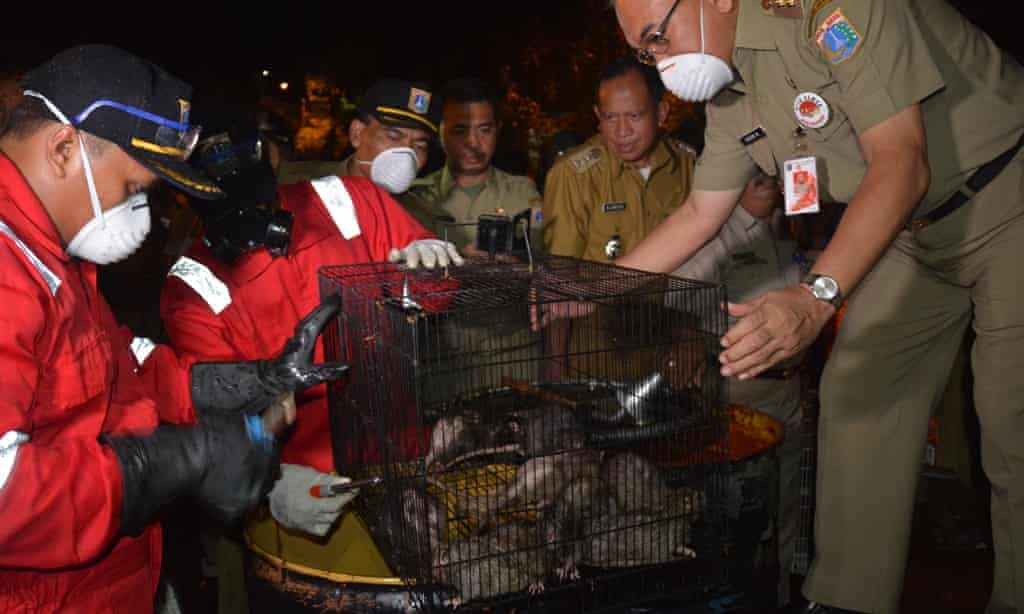 In nearby Indonesia, leptospirosis-triggered rat catching campaigns were also held, but they’re a bit different. For one thing, the bounty for a rat is about 20,000 rupiahs (about RM5.50), and only live rats are accepted. This is to avoid the people from poisoning or shooting the rats, which could potentially harm the public. Also, there had been records of authorities using the public to settle their pest problems since the 1900s, so it’s not exactly a novel idea. However…

NAH, BACA:
In the 1950s, the British RAF parachuted cats down into Sarawak. Yes, really.

Is it a really effective solution to our rat problem?

While the campaigns had been going on since 2008, a DBKL officer in 2015 had seen no big differences in the number of rats they’re catching in the affected areas. It could be a case of rats multiplying faster than people can catch them, or it could be that the rewards aren’t alluring enough. Even if the bounty is further increased, some had expressed their fears of the cobra effect happening. 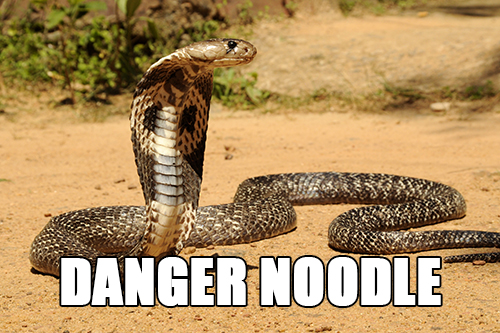 Or, as the young people call it, ‘the danger noodle conundrum’. Img from KnowYourMeme.

Basically, the cobra effect came from an unverified story from when the British ruled Delhi in India, which had a cobra problem. To solve it, the British offered money to people who could catch cobras and bring their skins to the authorities. As the story goes, the move was effective in reducing the cobra population for a while… until people figured out that they can just breed cobras for their skins, which was a lot easier than catching them. The British office was then inundated with cobra skins, and the officials figured that something’s wrong and stopped the bounty.

But the story didn’t end there. The cobra breeders found themselves with a surplus of worthless cobras, and they released them back into the wild, causing Delhi’s cobra situation to be worse than before the cobra campaign started. While this story could not be verified, it mirrors a real event called the Hanoi Rat Massacre in the 1900s. Hanoi is in Vietnam, just in case. Imgs from Kimono Robe Store and Medium.

When the French colonized Vietnam back then, they introduced toilets to the city of Hanoi, along with miles of underground sewage lines. These sewage lines soon became a breeding paradise for the rats there, causing a rat problem. The French officials offered a bounty of one cent for each rat tail presented to them, but people figured that if you just cut the tails and leave the rats, those will soon make more rats with tails to cut off. There were accounts of people smuggling rats into Hanoi, and farms that exclusively bred rats were found on the outskirts of the city.

So naturally, the bounty was stopped and the French guy responsible for it left the now-overrun-by-rats Hanoi, which was later attacked by the bubonic plague. It hadn’t happened yet in Malaysia as far as we can tell, but the rat problem does not seem any closer to being solved, either. Is there a way to solve this problem once and for all? Well, there is, and we’ll give you three guesses on what that is… Perhaps unsurprisingly, several people have already voiced their thoughts on the rat problem in Malaysia, and almost all of them agree on more or less one thing: besides extermination efforts, keeping infested areas clean is also a big part of the solution.

“Massive rat hunts and gassing are undertaken by some local authorities in Malaysia, but this is not solving the problem. Rats will thrive wherever food is available – especially discarded food… To keep the rat population in check we must ensure cleanliness and not dump food waste indiscriminately.” – Mohamed Idris, president of  the Consumer Association of Penang, to the Gulf Times.

But rats aren’t the only animals said to plague cities. Crows (Corvus splendens) have been said to overpopulate certain towns to the point that the authorities had to conduct crow-shooting campaigns to keep them in check. Besides potentially spreading disease, people get annoyed by the sound of them cawing as well as their droppings on cars. Why are there so many crows? Well, like rats, they’re scavengers, so they thrive on food waste and trash we throw around. A kenduri! Img from NST.

Stray dogs and cats were also seen as a problem by some people, but it’s a complex issue that we won’t go into. However, a lot of them became strays in the first place due to being abandoned, and if they weren’t spayed, with sufficient food (either from kind strangers or the trash) they can multiply, making the problem worse.

So while the authorities can catch or cull these animals, it’s a temporary measure at best unless the real causes behind them are addressed. Still, on the bright side there will probably always be rats in KL, so…