[This article was initially written by our Soscili friends. Click here to read.]

By now, you may have heard of the study on racial discrimination in the private employment sector by the Centre for Governance and Political Studies (Cent-GPS). Based on the study, Cent-GPS sent out 3,829 job applications for over 500 job openings using resumes of 7 fictional candidates of similar ages with similar qualifications.

Only difference between them is something they can’t change – their races, namely Malay, Chinese and Indian (and also gender). Even more interesting is that they used the same female and male models for all the races (using make up to match the commonly associated skin tone with each race) to “control the attractiveness variable”. The main findings of this study was that there was generally a huge gap in call backs between the Chinese candidates and the rest, that 70% of the jobs requiring Mandarin fluency are still not open to hiring non-Chinese candidates who know Mandarin, and that tudung girls are less likely to get called back than a girl without.

(Click here if you wanna kepoh the hows and whys of their methods and results.)

To those who dunno Cent-GPS, it’s a non-partisan KL-based behavioural and social science research firm, which aims to provide neutral statistical info on several national issues to spark discussions and facilitate decision making by policymakers, leaders, educators and the rakyat.

Recently, there was another govt-related study released by a PR firm Citrine One, about how badly the PH govt is doing. We were invited to the press conference about this survey and wrote about what happened there. A very noticeable thing about this Citrine One press conference was how much the survey focused on the negative aspects, which made us skeptical about their motives behind the survey. Click on the image to read our article about the Citrine One press conference.

And that’s why we gotta start questioning. So when we attended a press conference by Cent-GPS, we raised some sensitive questions too. First, we asked – who is paying them to do this study? They said that this study wasn’t funded by anyone in particular and was the brain child of the internal researchers at Cent-GPS. They added that they were actually open to working with anyone who’s interested in participating in this study. The lead researcher who presented the study. Image from Yahoo News Singapore.

Then, we tried our luck with this question – based on the rumours, is Cent-GPS actually owned by Barisan Nasional (BN)? Their response was:

“Not true and I understand why people would raise it as such… it’s because one of the people behind Cent-GPS is a senator from BN, Khairul Azwan Harun and there are some among our researchers who used to work in BN Youth… No, neither is Cent-GPS under BN nor is this report published to help BN.” – Zaidel Baharuddin told us.

Khairul Azwan, a.k.a. Azwanbro, used to be the UMNO Youth deputy leader. A quick look at his Facebook and Twitter page indicates to us that he seems progressive like Khairy. 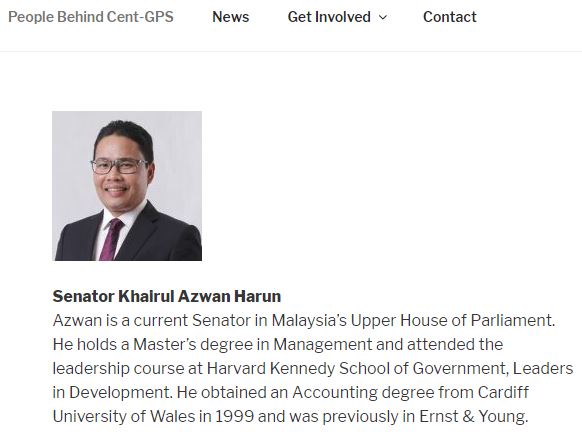 Apparently, we weren’t the only ones who did the questioning

Lately, this study has garnered a lot of backlash, particularly from DAP, who accused Cent-GPS of adding fuel to fire with this study. DAP stated that the study’s methods were flawed because of the really small sample size, pointing out that the variables tested by Cent-GPS needed broader research including resumes with and without photos of a bigger sample of candidates.

“For example, as photos of the applicant were included, a controlled study should have been conducted without photos to see the differences. The same applies to using a series of race and gender combinations as there is no certainty as to which particular factor was the influential factor in the experiment.” – said DAP. Another limitation pointed out about the study was not mentioning how the companies were selected besides just relying on the job portal, and how often multiple resumes were sent to the same company as well as whether each resume was sent to a similar set of companies with similar demographics.

NAH, BACA:
Is that social media post on water supply and SYABAS real? Here's where to check

Though that didn’t seem to be the case according to the report.

According to DAP, considering all these other factors would have made a lot of difference in boosting the study’s credibility. [The authors of another study, which probly inspired this one, have written a critique of this study. You can read it in full by clicking here.]

Criticisms of the study aside, here’s a little more about Cent-GPS…

Cent-GPS didn’t just do this one study. They’ve done other studies like a study on voters in the Sungai Kandis By-Election and the Initial Comparative Analysis of 3 By-Elections. But a more compelling one was a study on the affordability of homes surrounding MRT stations. Even we at CILISOS haven’t thought of that one. Image from The Mole.

This MRT study has answered in detail the question of whether the MRT stations are easily accessible for the B40 and M40 groups. Some shocking answers were discovered when they analysed the values of properties within 1km of each MRT station.

This attempt at studying something like this probably shows the need for people to start thinking critically about issues that are not only trending but also overlooked.

Data is everywhere, but we need to question where it comes from

A man in London made his shed the top rated restaurant on TripAdvisor by writing fake reviews there. He wanted to prove that, in the climate of fake news and society’s willingness to blindly believe just about anything, he could trick people into thinking that his shed is a legit restaurant with great reviews. And he was right… It got to the extent where he was forced to put together this restaurant in real life! One of the fake reviews. Image from Vice.

Voices of dissent are good. Such studies cause us to think differently, but also what’s important is to not just take it at face value, but consider other things like why the study was done, who did it, and whether the methodology and sample size was credible.

We at CILISOS deal with data on a daily basis, and we can tell you that it can be manipulated a million ways to show what you want it to show. Cent-GPS isn’t unlike other research centres like Ilham Centre, Merdeka Center, Invoke etc (maybe you’ve heard of them). Invoke was pretty transparently Pakatan focused, while the Pusat Penyelidikan PAS (PPP) is… well… PAS-focused.

It’s like a nasi lemak. On the menu, it’s a nasi lemak, but it can vary greatly depending on where you order it. At a mamak, in a hotel, or in a restaurant in Chicago. And much like a nasi lemak, once you know where it’s from, you’ll know if you need to take it with a pinch of salt.