So, unless you slept through 28th July 2020, you’ve probably heard how our previous Prime Minister, Najib Razak was found guilty of ALL seven charges related to SRC International that were filed against him. This decision was read by Justice Mohd Nazlan Mohd Ghazali, the judge of this high profile case.

“The defence has failed to establish beyond reasonable doubt the charges of CBT against the accused” – Justice Nazlan, as quoted by The Star.

The judge then sentenced Najib to…

Instead of spending 72 years in jail, Justice Nazlan decided that all of these jail sentences would run concurrently. So, Najib would only need to serve 12 years in jail. This is probably Najib’s reaction after finding out he’s guilty. Img from The Star

There have been a mixed reaction among Malaysians after this decision was read out to Najib. For one, many people have been a bit creative with posting up memes about the former Prime Minister.

For those who support Najib tho, they were clearly unhappy with the verdict. You may have seen a video of a makcik, who was at the mass gathering outside the Duta Court Complex and was clearly dissatisfied with the judge’s verdict. This is the makcik we’re talking about. Screenshot from @RavinP_69 Twitter

And it may be no surprise how some of these supporters would even take things to social media. Just recently, there have been several claims made against Justice Nazlan. Some of you may have seen them but for those who don’t, we’ve compiled some of these claims and take a closer look at them to see if they’re actually true.

Identities of the people behind these posts have been censored for their privacy.

So without further ado, let’s start with…

1. CLAIM: He is apparently blood related to Tun Mahathir and Tun Hasmah

One of the most common claims you may have stumbled upon online is how Justice Nazlan has blood relations to another former Prime Minister, Tun Mahahtir. But what’s interesting is how there are several versions to this claim. 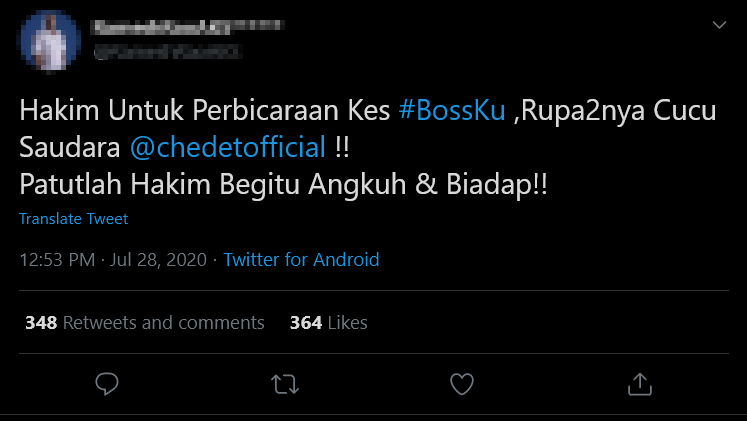 Version #1: He is Mahathir’s ‘grandchild’. 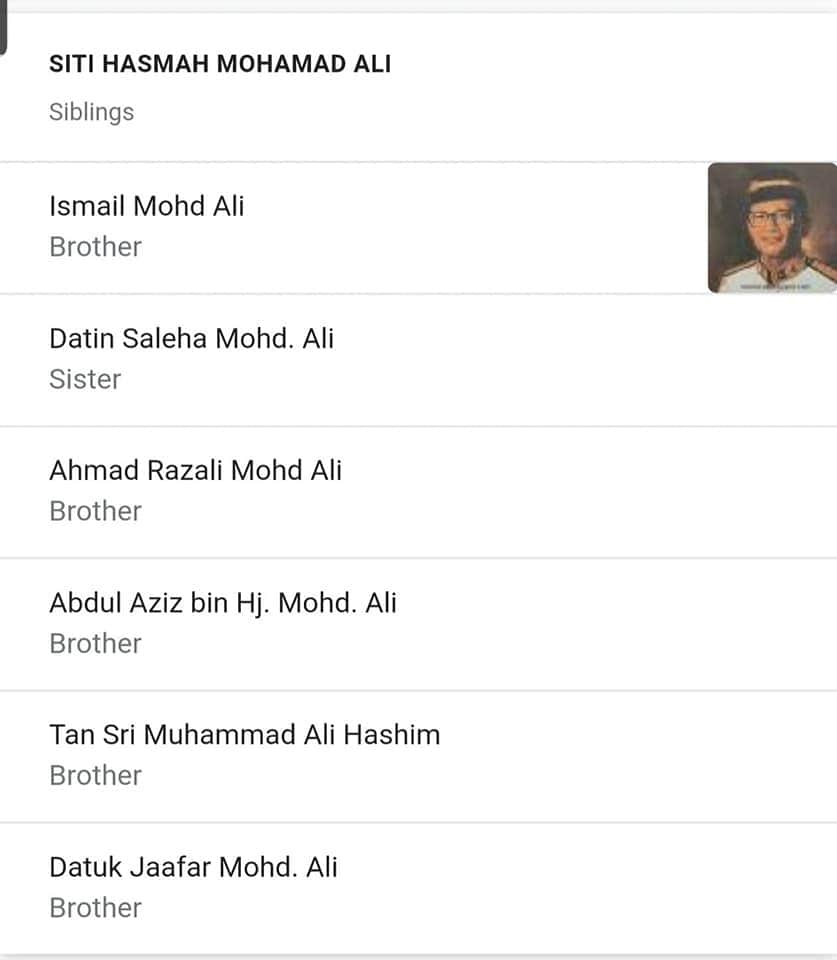 So, claim version #3 is clearly not true la ok. Screenshot from Google

Besides, Mahathir’s son, Mukhriz Mahathir, has recently denied these claims besides urging the Attorney General to investigate the people who made these claims. He added in his tweet that the allegation is considered a contempt of court.

We say that because we also found a news report that somewhat supports this claim. In that report, Justice Nazlan is reportedly an alumnus of MCKK and this statement can be found in the aforementioned Facebook post.

Apparently, you’re either with UMNO or DAP :\

Another claim we found was how Justice Nazlan is associated to DAP tho we weren’t able to find any connection of him to the political party. We tried searching for this connection but the only thing we found was news about his involvement in the Liberation Tigers of Tamil Eelam (LTTE) case. And that has something to do with the acquittal of two DAP politicians, who were involved in the case.

But, anyways, there were also claims saying that he was one of the judges who acquitted the Seremban Jaya assemblyman, P. Gunasekaran of two charges of supporting and possessing items related to LTTE. Okla, this actually happened and it is true that Justice Nazlan was one of the judges involved in acquitting Gunasekaran. However, the decision to acquit and drop all 34 charges against the 12 accused of being involved with LTTE was made by the then Attorney General, Tommy Thomas.

“Accordingly, in the exercise of my discretion pursuant to Article 145(3) of the Federal Constitution, I have decided to discontinue proceedings against them with immediate effect.” – Tommy, as quoted by The Star.

This decision was made because Tommy found that mere worshiping idols (read: leaders) does not constitute a crime although their idols are considered terrorist.

“Just because each of these leaders used terror or violence to achieve their political goals does not mean that an ardent supporter online should be regarded as a terrorist or is planning a terrorist act.” – Tommy, as quoted by The Star.

Well, this may be why Tommy’s decision sparked a pretty huge dissatisfaction among Malaysians at that time. But, as for Justice Nazlan, it’s perhaps unfair to deem him a DAP supporter based on this case alone.

3. CLAIM: Justice Nazlan is the judge for ALL UMNO’s high profile cases NAH, BACA:
The results of the Great Malaysian Movie Survey - and what rakyat smuggle into the cinema (*tsk*tsk*)

Anyways, while it is true that Justice Nazlan is the judge to these cases, it is also important to note that he didn’t quite stay as the judge for all aforementioned cases la.

In Tengku Adnan’s case, for instance, he was disqualified as the judge in fear that he would be biased. This decision was made by a three-member bench of the Court of Appeal.

“How could he, having not just looked at but also considered the facts of the case as well as the documentary exhibits tendered in support of the plea of Tan that he offered the bribe to the appellant (Ku Nan) which was accepted, be able to completely obliterate this crucial fact from his mind?” –  Rhodzariah Bujang, one of the panel members, as quoted by FMT. The panel members believe that removing Justice Nazlan from Tengku Adnan’s hearing would ‘maintain the highest standard of public confidence in the judiciary‘.

However, it’s also important to note how Justice Nazlan doesn’t only take up cases involving UMNO gais la. The list in the Twitter thread also included the LTTE case, which we mentioned earlier. And another thing we found was how he was also the judge in PKR’s Vice President, Tian Chua’s sedition case. In this case, Tian Chua was acquitted and discharged.

4. CLAIM: Justice Nazlan is only a junior judge, whose first high profile case is the 1MDB To understand how this claim came about, we gotta take a look at Justice Nazlan’s background. Justice Nazlan, who is an Oxford graduate, used to practice at Zaid Ibrahim & Co for five years and served at the Securities Commissions as its head of enforcement.

He was appointed as the Judicial Commissioner in 2015 and the High Court judge in January 2017. If you were to look at those years, you’d notice how he was appointed while Najib was still the Prime Minister. Just check the years out. Screenshot from kehakiman.gov.my

In 2018, Justice Nazlan was transferred from the commercial division to the criminal division and eventually took over Najib’s high profile case from the previous judge, Justice Mohd Sofian Abd Razak. He replaced Justice Sofian because the latter had blood relations to an UMNO assemblyman in Pahang, so this certainly raised questions about Justice Sofian’s bias la.

However, when Justice Sofian was asked to recuse himself, legal experts were expecting a Court of Appeal judge or a senior judge to take over Najib’s case. They made their predictions based on past practices, especially in previous corruption cases.

For instance, a 1977 corruption case involving former Selangor Menteri Besar, the late Harun Idris. In this case, the late Sultan Azlan Shah, who was the Federal Court judge replaced the former judge of this case.

Ok la, while some parts of this claim may seem true, we can’t neglect the fact that Justice Nazlan has experience in handling other high profile cases in Malaysia (we’ve covered this in the previous section). And despite all these claims…

Some Malaysians still believe that the judicial system is independent

Unlike any other bogus claims that were being made online, this time around, a number of Malaysians have been calling out on those who are making and spreading these claims about Justice Nazlan. See, although Justice Nazlan sentenced Najib to 12 years’ jail and a RM210 million fine (that we mentioned earlier in the intro), it is also worth to note that the judge had later granted Najib a stay of execution (read: delaying the execution of his sentences) pending his appeal to the Court of Appeal.

Najib was also ordered to pay an additional RM1 million bail besides reporting himself to a police station of his choice on the first and 15th of every month. As of the time of writing, Najib had reportedly paid the RM1 million bail.

Besides that, there isn’t any say as to how this case would end as of now. So, for the time being, it may be best for us to put our faith in the judicial system despite our political differences. This is somewhat in line with what the Prime Minister, Muhyiddin Yassin, reportedly said…

“Let’s continue to have faith in the judicial system.” -as quoted by The Star.

One of our readers, Rastam Hadi, reached out to us to suggest that we include steps on how to report fake claims to the Malaysian Communications and Multimedia Commissions (MCMC). So, we’re updating this section to include just that.

Now, if you ever stumble upon any claims that seem dubious or memang straight up fake in the future, you can do your part to help stop spread them. And, according to MCMC’s website, there are several ways to lodge a report:

Yes, we get that one way to stop fake news is by ignoring them and not sharing them to other people. But the MCMC can only take action against those who post or spread fake news online when the public lodges complaint to the MCMC.

So, with the information we provided above, the decision to be good samaritans to combat fake news now lies in your hand.