As much as we like to crack the occasional joke about it, we sometimes feel really bad for PM Najib and his social media/PR team. From Facebook posts that get spammed with hashtags asking him to step down to backfiring #RespectMyPM campaigns, we gotta say that it really ain’t easy being Jibby. 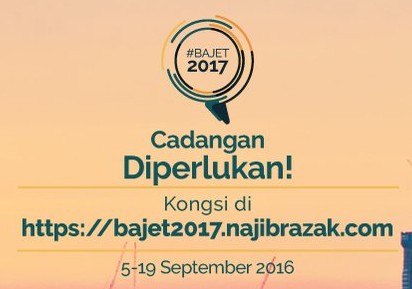 However, PM Najib is back again with another social media-ish campaign, but this time it’s a little different…

PM Najib is asking the rakyat – yes, as in regular people like you and me – to give him ideas for the 2017 Budget.

Before your brain starts shutting down at the “Budget” word, it’s really simple – the Budget is basically Malaysia’s financial plan for the entire year. It outlines how our country’s money is being spent (like how it’s being allocated to different departments), where and how the government will make money, and a forecast on the state of our economy. And considering how a substantial amount of this budget is comprised of our tax money, it would make sense for us to be able to have a say in how it’s being used, right?

And now for the best part…

You can give your ideas from anywhere (even the toilet) because it’s all online!

It seems that PM Najib is really going all out this year to get everyone involved in the Budget preparation – he’s already held a consultative council (fancy word for “big meeting”) involving over 200 representatives from the private sector and NGOs… and now it’s our turn to have a say.

From September 5th – 19th, all you need to do is to head over to the Budget 2017 section on PM Najib’s website (nah, we linked it here for you), register via email, Facebook, or Twitter, and you’re all set to go! We recorded the rest because it’s much clearer than writing in words:

And what will they do with all these ideas and suggestions? Well, let’s hear it from PM Najib himself:

Every issue that is raised and proposal forwarded will be scrutinised and  considered, and subsequently discussed at a meeting of the Focus Group to be held soon for the Budget 2017.” – PM Najib, as quoted by The Malay Mail Online.

So now that we know how it works, let’s go to something some of you might be thinking:

But what about the trolls??! …Is this site even legit?

The most obvious assumption we can make is that they must have some sort of spam filter or moderator weeding out the nonsense submissions. Out of itchiness and curiosity, we decided to test this out by submitting three suggestions – a (hopefully) good one, a borderline one, and a troll one. Here’s what we come up with:

We quickly found out that the first level of troll-defense they’ve implemented is the registration process. When we tried registering by email, we noticed that the form asks for your IC and phone number. However we should also note that at the time of writing, email registration doesn’t seem to work as we kept getting this error:

Twitter and Facebook works, but be warned that it will ask you for certain permissions, including automatically registering you to updates from najibrazak.com (all of which can be disabled later 🙄 ): 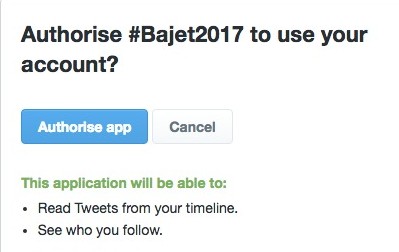 For full disclosure, I submitted the first two suggestions using my personal Twitter account while the troll one was submitted using an account we’ve dedicated to CILISOS writer Jo-Lyn’s random quips (Click here to follow I am mouth pangsai) because I’m opposed to the idea of conjugal visits in prison.

So far, none of the submissions have made it to the site, but we’ll keep monitoring it over the next few days and update when it does.

But what if Najib hired a bunch of cybertroopers to put suggestions?

Based on what we found out about cybertroopers, there’s a possibility that this may happen since there’s no way of telling if the submissions are from real people – all you get is a name and, if signed up via social media, a picture. However, it does look pretty legit since there are ideas from preserving our forests…

To this guy who stole our GST idea.

So unless they went through a whole lotta trouble to make this whole exercise appear legit, we’re gonna say that it’s…. probably legit la.

The only question left is, will they actually implement these ideas? While it warms the cockles of our hearts to know that the government is taking proactive steps to get the rakyat involved in the running of the country (Democracy!), our last remaining sliver of doubt has to do with transparency – how transparent will they be when choosing and discussing the suggestions and, as mentioned this big fat header above, when and how these ideas will actually be implemented.

Of course, we’ll have to wait to see what happens, but for now, it would be great to see this sort of interaction in other sectors of government. For example, the UK Parliament’s website has a special section for petitions that can be submitted by any British citizen or UK resident. Any petition that reaches 100,000 signatures will highly likely be considered for debate in Parliament. Here’s what it says on the FAQ:

We may contact you about the issue covered by your petition. For example, we sometimes invite people who create petitions to take part in a discussion with MPs or government ministers, or to give evidence to a select committee.” – Quoted (with edits) from the UK Parliament’s FAQ.

We’re not sure how well this budget thingywingy will turn out, but still, we really do encourage ugaiz to send in your suggestions (and let us know if they get though) or at the very least vote for the ones that you think would benefit the country.

Oh, and please don’t troll them 😳