Before we start, let’s get a show of hands…

Parking summons are SO common in Malaysia, and it’s not hard to see why. Our country is small enough as it is, but we have a pretty high rate of car ownership per household. No wonder sights like these are getting more common by the year: 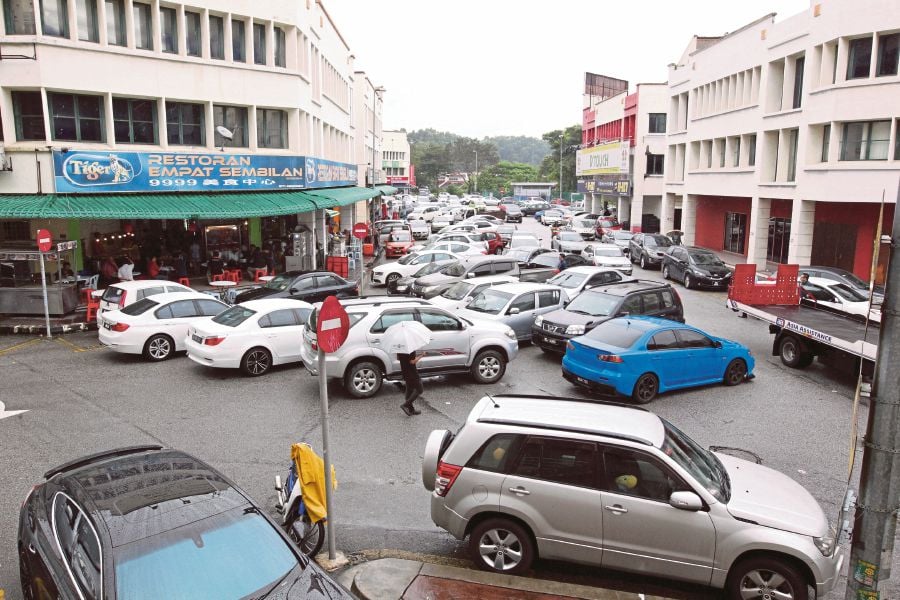 With all the summons that pile up from illegal parking, we can’t help but wonder…. what actually happens to the money that get collected from all these notti parkers? And just HOW MUCH MONEY have been collected?!

Your money goes to the Ministry of Finance (like taxes do).

“The traffic summons money goes to the government treasury controlled by the Ministry of Finance. Any source of revenue from the government agencies (including fines as non-tax revenue) go to the Federal and State Funds but the agencies themselves are not allowed to control the money in the Funds” – a police veteran told CILISOS

All the federal money goes to the Federal Consolidated Fund (the country’s main piggy bank) while all the state money goes to the State Consolidated Fund (a particular state’s own piggy bank). They’re for govt staff expenses, debt obligations and legal expenses. The National Finance Council advises the govt about expenditure, but only the Parliament can authorise expenditure for both specified and unspecified purposes. So, money can’t be withdrawn unless it is charged on the Fund or authorised by the Parliament.

You can’t get more demanding than this, right? Image from Giphy.

The Police Fund does not include saman money as the saman money does not go straight into the Police Fund but instead ends up in the overall govt money of the Federal Fund. It includes other sources of income such as disciplinary fines for police officers to pay, money paid for extra or special police services and donations or rewards accepted by the Inspector General (IGP).

Considering that Malaysians are, well, popular for being really tak kisah with parking their cars here there and everywhere, we can’t help but wonder… how much money has been collected from samans?!

Notti drivers have given our country SO much money

Before we get into that, here’s how much law-breaking drivers in Malaysia get fined. The range of summons rates according to the PDRM Traffic Summons Rates is RM50-300. There are 4 main categories (from the highest rate for the most serious to the lowest rate for the least serious):

NAH, BACA:
5 Things the Malaysian Government Always Has Money For

The longer you delay your summons payment, the higher you have to pay for it. This is just the govt’s way of encouraging traffic offenders to settle their payments quickly. It’s like a credit card payment to the gomen for the trouble you’ve bought.

The Estimates of Federal Government Revenue 2018 did not explicitly state which category of fines and penalties (of non-tax revenue) the traffic summonses revenue fall under, so we have taken information for the following categories: Fines and penalties in total, out-of-court settlement fees, fines and forfeitures, and miscellaneous fines fees. Data taken from the Estimates of Federal Government Revenue 2018.

Paul Tan’s website (quoting the PDRM Traffic Cops Record system) stated in 2016 that approximately 28.4 million traffic summonses were issued from 2010 to 2015 (worth RM1.6 billion) and 13.8 million of the issued summonses were settled, with 14.6 million being outstanding summonses (worth RM1.5 billion). An article on Free Malaysia Today in 2016 claimed that there were A WHOPPING 5.4 MILLION UNPAID SAMANS since 2007… and this is in KL alone!

Walau!! Why are millions of summonses unpaid? The FMT article suggests that the Mayor’s proposal to lower the rates (giving discounts) for older summonses encourages offenders to delay payments while waiting for discounts. To add to the delays, some tickets do not even reach the offenders and the summonses are generally not issued to named offenders, so they themselves dunno that they have to pay the summonses. It’s so inefficient and confusing that even a salesman was able to get away unpunished with 102 unpaid traffic summonses until he got caught. :O

But is giving people saman effective in curbing traffic offences?

Teresa Kok, who requested for the above information on summonses collected (Paul Tan’s website), also wanted to know how increasing the traffic compounds could make roads safer. To a certain extent, it should be discouraging road users from committing any offence.

Zahid Hamidi meanwhile said that the proposal to raise the compound rates was aimed at creating awareness among road users to be more careful on the roads and obey the road laws. Whoa…

Is this working? Image from Malaysian Digest.

The Awareness Automated Safety System (AWAS) aimed to “increase the perception of being caught (POBC) for motorists” and to “remind road users on the importance of road safety“. Research by the Malaysian Institute of Road Safety Research (MIROS) listed Sure, Swift and Severe (3S) as the interrelated factors affecting the effectiveness of AWAS enforcement.

Guess what the Transport Ministry said last month? That drivers and operators of express bus companies who have unpaid traffic summonses were not allowed to operate during Raya to minimise road casualties. The logic behind this ruling is that traffic offenders should not be behind the wheels of the buses that are responsible for the safety of many lives. So true.

If traffic summonses are enforced such that repeat and non-paying offenders can be traced and blacklisted, then issuing them would work in making them obey the road laws and eradicating road fatalities. Some ways to stay safe… and smoooottthhh. Image from The News Himachal.

The rationale of traffic summonses and enforcement is to ensure that the roads are used safely and smoothly. Violate that and you owe the gomen your saman money. What happens to your saman money is up to the Ministry of Finance.

But what is up to you is choosing whether to obey the traffic law while saving your hard-earned money or pay more of it to the gomen funds (or worse, face more serious consequences for more serious offences).

Of course, if you’re feeling generous towards our gomen but don’t want to commit an offence, you can always consider the Tabung Harapan.

(Or just donate to Cilisos, writers no food la… hehe)