[This article was initially written in BM by our Soscili sistas. Click here to baca.]

Recently, Dr M announced that the govt wants to introduce body-worn cameras to all enforcement officers in Malaysia, including the PDRM, immigration and customs departments. He explained that there have been times when the officers are accused of not following protocol and having the body cams would show what really happened. “These officers will talk or do something while at work, so we want to know if they are doing the right thing, and how they behave towards their client. There are accusations where officers have bullied or beaten up people.

So we want to know the truth. Of course, the officers will deny, while the client will insist it is true. Between the two, we do not know who is right. But with body cameras, we will know whether the accusation against the officer has basis or not.” – Dr M told the press.

This caught the attention of the MACC, who is supporting this initiative on the basis that this may be one way to address the abuse of power and corruption among our officers, especially since Malaysians have probably gotten sick of seeing headlines like these. So, it’s a no-brainer that the use of body cams in hopes of minimising such headlines is being proposed.

You know how whenever you see an incident and suddenly all the phones come out? And then they’d upload the video for it to later go viral because it provides substantial visual and audio evidence in ways words can’t. True to the saying “seeing is believing”, people are more likely to believe something from a video than from a person just telling them something without any proof. This is kinda the same argument behind the use of body cams.

In case you’re wondering what a body cam looks like. Image from Theskop.

Using the body cams means that officers will kinda have to do their jobs more transparently and efficiently. If your office got CCTV behind your desk you would be scared to slack off kan (boss pls dun put CCTV in Cilisos office). The camera records an officer’s every move, offering transparency over their actions while it also makes the officer’s job more efficient since it puts away the need to jot down notes and even serves as evidence to back themselves up if the cops get wrongly accused.

The idea to use tech to improve enforcement work may have stemmed from Malaysia losing between RM3bil and RM5bil due to the revenue leakages where we didn’t collect proper fees and such due to a lack of proper enforcement occurring at our country’s entry points, as revealed last July. Chief Secretary to the Government Ismail Bakar said that the this was apparently due to smuggling, either due to negligence or the lack of equipment to monitor and control the border, which the govt apprently tried to fix long ago.

However, this plan isn’t wasn’t entirely welcomed. PKR stalwart and Pasir Gudang MP Hassan Abdul Karim claimed that this is a violation of human rights and that the use of body cams might be disrespectful to the integrity of the profession because of the assumption that the officers cannot be trusted.

“The PH government should not admit defeat quickly and wave the white flag where they become desperate to implement body cameras on its own civil servants as if they are robots that cannot be trusted.” – Hassan urged. This officer at the Changi Airport seems okayish with the body cam. Image from SATS LTD.

Nevertheless, you wouldn’t be seeing the officers wearing the body cams so soon because the govt needs to consider the expenditure. While we aren’t certain for sure how they’d do that, we ourselves also tried to calculate the cost of using body cams by referring to the price tags in the USA. And as it turns out…

Although body cams can sometimes promote positive interactions between enforcement officers and the public, there’s a high price to pay. In Malaysia, there’s so far no estimate for the cost of body cams, so we checked the cost incurred in the USA, where body cams are generally considered as a financial burden. How much is this little guy? Image from Malaysiakini.

Now we don’t have an estimate for a body cam alone, as the price for the device not only covers the device itself, but also fees for server storage and maintenance. You buy a new car for RM100,000 doesn’t mean that’s the only fee you pay right, as you’ll also have to take into consideration service charges, petrol, and all other various things into account for the price of using a car; the same for body cams lo.

As an example, an order for 17 body cams in Chicago was cancelled because of the $20,000 annual fee for using body cams and video storage. Assuming that the same rate can be applied in Malaysia, the estimate for one police officer’s body cam is:

The 2017 total number of police officers in Malaysia was 117,929, so the total cost for PDRM to use body cams would be:

Now we don’t know about you, but RM578 MILLION seems PRETTY HIGH! This is why many police stations in the USA, especially the smaller ones, found it too expensive to record, store and manage the recordings. In Wahoo, Nebraska, the cost for each police officer can reach up to $3,000 (RM12,510). Meanwhile, in Arlington County, Virginia, the police there decided to ditch body cams after running a pilot project, with an estimated annual cost of $300,000 (RM1,251,000).

“The easy part is buying the body cameras and issuing them to the officers. They are not that expensive. But storing all the data that they collect — that cost is extraordinary. The smaller the department, the tougher it tends to be for them.” – said Jim Pasco, executive director of the USA National Fraternal Order of Police. A charging station for body cams. Image from The Washington Post.

Dr M himself said that the govt doesn’t even have enough money to employ more officers, on top of the current 1.7mil civil servants, so there might be doubts about a budget for body cams in Malaysia. There is also one slightly important other thing to consider too…

Body cams would be useless if not used properly

Yeah, we did tell you how helpful it is, but the Congress of Union of Employees in the Public and Civil Services Malaysia (Cuepacs) suggested that the govt first run a pilot project to check for downsides of using body cams. Some of the concerns that could be considered are:

Hence, to address such flaws, there are calls to implement the use of body cams with a proper Standard Operating Procedure (SOP) in recording and processing the videos – and maybe blurring faces in the videos disclosed to the public to protect the privacy of individuals appearing in the videos.

“It must be carried out in accordance with the Standard Operating Procedure (SOP) and members may be subject to action if they purposely turn off the camera.” – said Latheefa Koya of MACC. 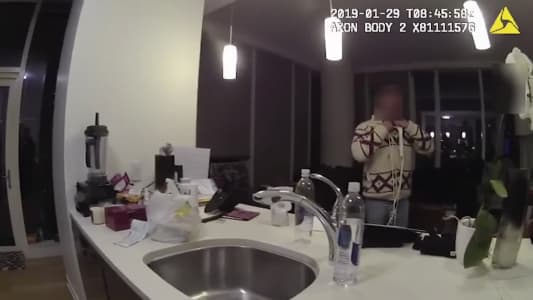 Blurred face of an individual in a body cam recording. Image from Chicago Police Department.

Perhaps with such effective management of body cameras in law enforcement will the country meet the goal of making Malaysia a country of high integrity and good governance. Because, in the end, we are trusting our country’s enforcement to keep the peace here.

But hey, if you are skeptical of the police, then perhaps you would be more supportive of body cams, since apparently the camera never lies right?

Share this article:
NAH, BACA:
'Squeaky-clean' Canada has corruption...and it has something to do with a Malaysian