Before we start with anything, let us ask you this…

There’s no doubt that Covid-19 has changed the way a lot of us go to work – seriously, this writer has never spent this much time at home before – but you know, at least we can still work. Unfortunately, the same cannot be said for those in event management and live performances.

Needless to say, with the government putting a stop to public gatherings on short notice, the events industry has been on the receiving end of a pretty nasty sucker punch to the stomachs – well, financially at least. We managed to get on a call with Rizal Kamal, Iqbal Ameer, and Para Rajagopal from the Arts, Live Festivals and Events Association (ALIFE) to learn more about the issue, and they told us that… For those of you who don’t know, ALIFE is a non-profit association that fights for and protects the rights of all sorts of people involved in live events, from the organizers to the guy holding the skull while reciting Hamlet in KLPAC. Think of them as the Avengers for the event industry. Maybe this image would work better.

Heavily affected by the numerous MCOs that we’ve been put under, events simply either cannot happen or they get canceled when a new MCO has been implemented. And Rizal told us that it eventually led to a lot of industry players quitting the industry and looking into other options to earn a living.

“There’s a lot of people suffering from this. Their livelihoods are impacted and a lot of them has had to exit the sector. Some have managed to look for other jobs because they have the skills, but what about those who have been quite focused on this line of work?” – ALIFE chairman Para, in an interview with Cilisos

Due to that, ALIFE has decided to dust off its shield and appeal to the government to allow for event planners to hold events in the future.

For example… Headline from NST

According to Iqbal, while the government has allocated some funds to help out the creative industry, which naturally includes event planning, they are apparently not enough to support everyone. After all, if they cannot hold events, the money will run out eventually.

“The root of the problem is that their financials are stagnant because they’re not holding events, unlike restaurants that are still able to operate. These funds may help for awhile, but they’re not addressing the root cause, which is to help the companies stay afloat.” – ALIFE vice-president Iqbal, in an interview with Cilisos

Right now, all event planners can do is to sit and wait for the numbers to go down so they can do what they do best, but realistically, that doesn’t seem possible in the near future.

As such, we were told that ALIFE has been actively discussing with the relevant government departments to come up with ways that can allow for event planners to at least hold some small events to get the money flowing – and… A test event that ALIFE held in September 2020. Image provided by ALIFE

We can’t exactly blame the government for restricting mass gatherings during these MCOs. Just look at how an election in Sabah managed to give rise to an almost constant four-digit reports in Covid-19 cases.

“While the government was a bit slow to react for our industry in the beginning, they have been opening up recently and realized that they have to look into all sectors, including the events industry.” – ALIFE president Rizal, in an interview with Cilisos

So now, ALIFE has come up with a rather unique system proposal to the government that considers the safety requirements and social distancing rules which have become the new normal. And it’s what they call a tiered SOP for the event industry to operate. We hope you didn’t spend the last five minutes squinting through the table above, because here’s the TLDR:

Now, this is not just some party trick – ALIFE has actually done test events before to make sure that it’s a viable plan, which we’ll talk more about later.

“Right now, we’re not even allowed to do a 30-pax event, which is very low and should be very safe as long as we follow the SOPs. The government should allow us to hold events based on the proposal that we came up with, rather than just completely shutting us down and killing us eventually.” – Rizal

Okay, all things considered, that sounds like a pretty decent system. But now, the question is: will Malaysians even want to attend an event in times like this? This may come as a surprise, but…

90% of Malaysians are keen to attend live events

So back in September when Malaysia was still in RMCO, ALIFE had actually organized two test live events in collaboration of events company Live Support, which were the Comedy Night and Band Nite.They were headlined by personalities such as Harith Iskander, Hillary Ang Project, and Heavy Machine.

What was unexpected was that these live events managed to attract around 250 guests each. And while they were holding these events, ALIFE got to do a short survey with the guests.

“We did these test events and a survey with the guests in September, and 90% of them said they wanted to come back to a live show.” – Para 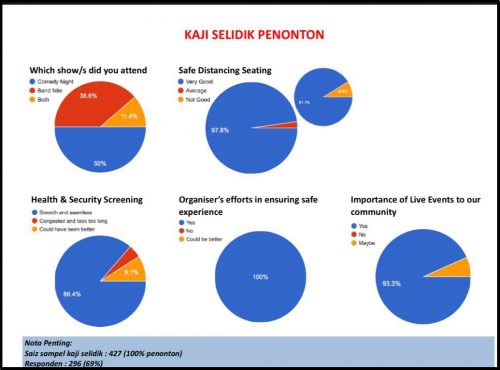 During the short RMCO when the government allowed for live events, people were evidently quite keen to attend live events, as long as there are proper SOPs and protocols.

Well, if you ask the people who attended a live event in the middle of RMCO, it’s very likely you are gonna get a lot of them to say yes, because they are, you know, there. But when we look at other places that organized live events in that time, such as KLPAC, we also heard that they also managed sell out a lot of their shows during the RMCO, which in theatre is quite rare.

As such, Rizal, Iqbal, and Para are all confident that if the government allows events to be held based on the tiered system that they’ve come up, they can simultaneously ensure the safety of the guests and prolong the livelihoods of the industry players.

“There’s always a risk, like how you take a risk when you go to a grocery store, but we are confident that we can do it.” – Iqbal

Basically, Rizal, Iqbal, and Para are not saying that the government should straight up allow for live events regardless of the consequences – what they’re saying is that the rakyat should be given a choice, and it’s the organizers’ responsibility to make sure that it’s all safe.

Whatever the case might be though, they are still expecting that…

The events industry may be same-same but different

The new normal is nigh, if not already here. And Iqbal told us that the new normal concept will likely apply to the events industry as well. For example, he was of the opinion that hybrid events will become a norm, where guests can choose to watch the show on location or stream it live. He’s also suggested that the ticketing system may get ‘more VIP’.

“Take a typical event in KL – there are normal tickets on the floor and VIP tickets with quirks like dedicated bars. Now, I think that there will be options for things like everyone getting vaccinated at the top so that the VIPs will have zero concerns about getting infected.” – Iqbal

On one hand, we will likely see all these small differences that will happen in the new normal. At the same time, they’re not just waiting to be able to hold events again, but rather they are evolving live events like a Pokemon. For example, Iqbal’s working on a drive-in horror project called Ice Box, which is like a horror house except you’re in a car – you can read about it here.

There’s really no telling what will happen how things will progress going forward, but we do hope that their proposal to the government will result in an opportunity for us to show up late at events again. In the meantime, writing this article has made this writing miss going to concerts, so excuse her while she put on her VR headset to watch Taylor swift perform virtually.