When Perikatan Nasional makes a proposal, we’d expect opposition parties like Pakatan Harapan to criticise it because that’s what usually happens in Malaysian politics. This year, we might actually see them agree on something, and it seems that they’ve already started.

Recently, Ismail Sabri and Pakatan Harapan made an agreement where PH will support Ismail in exchange for pro-rakyat measures being made. This agreement is called a ‘confidence and supply agreement’ (CSA), where a minority government ‘borrows’ numbers from other parties to make a majority.

They still haven’t announced what’s in the agreement yet, but it’s likely to be similar to the one proposed by Mahiaddin before. That offer included some pretty big reforms such as enacting an anti-party hopping law, limiting the Prime Minister’s term, implementing Undi 18 immediately, and all MPs getting the same allocation regardless of their party.

This all sounds very nice, but we’re pretty sure right now what you’re thinking about the paragraph above is:

Sure nothing will happen one.

Surprisingly, there’s someone who has a lot of faith in this agreement, despite most people having this perception that they would be the first to be critical of the gomen, and that person is Thomas Fann, chairman of Bersih.

PM Ismail Sabri is talking to the Opposition. They need CSAs to seal their deals! #bersih2 #KetuananPengundi

He thinks this will be a win-win-win for the gomen, Pakatan Harapan, and us rakyat.

(Can be a bit coy – you don’t know if there’s suddenly a sports car outside his house, or he genuinely believes this will wokr)

We’re not sure if a sports car suddenly “appeared” in his garage one day or he really does believe the agreement would work, so we decided to reach out to him on this.

Is two years enough to make significant reforms? Not too short ah? At least we’ll have this meme for 2 years. Image from Juice

For starters, Ismail Sabri’s government will only last for two years tops, as the next general election will be in 2023. If you think about it, we’ve had previous governments with five-year mandates, and that one also a bit hard to get reforms done during that time. So how???

For Thomas, he believes that two years is actually a reasonable time frame to cover Mahiaddin’s previous offer as well as Pakatan’s Buku Harapan. We checked and there are 7 things in Mahiaddin’s offer and 10 in Buku Harapan, so that’s 17 promises to cover.

“Most of the reforms offered by Muhyiddin and those in the Buku Harapan can be done within two years if there is political will.” – Thomas Fann to Cilisos

Super big parliament reforms have passed before in just one parliament sitting. The last time it happened was the National Security Council Act 2016 during Najib’s time, which came about due to terrorist cases such as the one in Lahad Datu in 2013, and allows the government to declare emergency-like powers without going through the Agong. It officially became a law just 8 months later, so if our politicians really want something to happen, they can.

However, he did caution that structural reform such as changing our electoral system or reforming the election committee may take longer than one or two terms. This is because changing a law is one thing, but changing a system can take much longer than that, but it’s something that can be started right now.

What if the agreement gets stuck in parliament???? At least we can still get memes from parliament. Image from Twitter

This is why the bipartisan agreement can help avoid this issue, because if both sides can agree to pass something for the greater good of the country, it will pass. Right now, a lot of proposals are stuck in parliament as parties are looking out for their own political stance, but agreement from both sides has happened before with Undi 18.

So for this bipartisan agreement to work, they’ll need to be realistic about it. This means prioritising reforms that are most important for the rakyat right now, such as increasing the Covid-19 fund by RM45 billion, and cash assistance of RM11 billion for 11 million recipients.

“There are always low hanging fruits that can be quickly done and passed in Parliament and there will be some that requires more studies and consultations. The agreed reforms must be realistic and not too overly ambitious. – Thomas

What if the opposition join gomen and become one big cartel??? 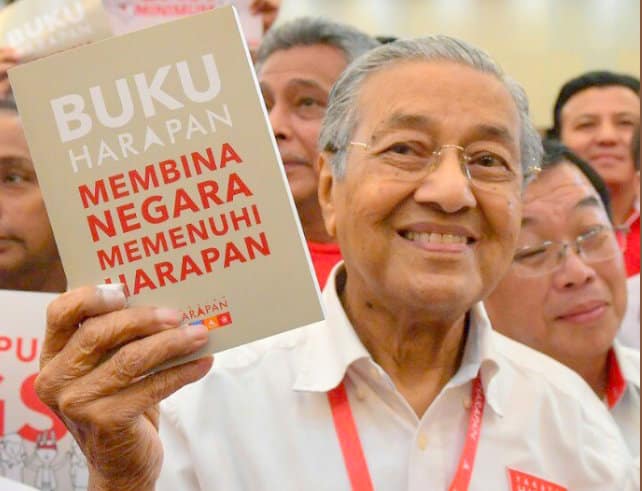 Remember this? Image from Malaysia Dateline.

Political parties make promises that they don’t know for sure whether they can implement it or not, and we are voting for them based on those promises. So why would this be any different since they won’t be held accountable for it? If we’re gonna think of recent unfulfilled promises, it would probably be Pakatan’s Buku Harapan – which PH admitted was hard to implement, because they didn’t expect to win.

To prevent this, Thomas says that there needs to be failsafes in the agreement, where the opposition can trigger a vote of no confidence without it being blocked. So if it’s not working out, they can pull out of the agreement.

There also needs to be transparency in this agreement, where the details can be seen by the public, who will then use that to measure their performance on.

The CSA should also be signed publicly and the details published for all to see (so) that we are all witnesses to it.” – Thomas

If it works, it might change Malaysian politics for the better Image from Know Your Meme.

“We are now presented with a unique opportunity to see bipartisan cooperation… Instead of enticing MPs to party hop… Ismail Sabri learned from the mistake of Muhyiddin that it is probably wiser and more sustainable to have CSAs with the opposition.” – Thomas

We’re not completely jaded la, so we did ask what will happen if *cross finger* this agreement actually jadi. If it does happen, Thomas says that we will finally be catching up to other developed democracies. Agreements between a ruling government and opposition parties is pretty normal in places such New Zealand, where they didn’t have a majority government since 1996. But at the end of the day, we don’t know what will happen, because minority governments can go from really good such as the one in New Zealand, to Canada where it’s not working so well, so it will still depend on the government in charge.

This will also change how we vote, as we won’t be worried about who to vote for. We can then put our trust in people who look out for our well-being instead of their party, which will improve voter mentality and the government as well. Right now, some of us might vote certain parties just because we don’t want a certain race to be in power, for example. So if this agreement goes well, we won’t even care about voting someone from DAP as long as they’ll do their job.

But all of these are just what-if’s la, so despite Thomas’ optimism, we’ll still have to wait and see whether this is janji ditepati or just janji dicapati.

Share this article:
NAH, BACA:
5 Malays tell us their side of the shocking events on May 13th 1969