If you’ve spent any time on social media recently, you might’ve noticed that a lot of conversation online recently revolved around racism. And quite recently, the Limkokwing University of Creative Technology was involved in several allegations for being racist.

Well, it kinda started off when a billboard depicting Tan Sri Lim Kok Wing as the ‘King of Africa’ was placed in the university’s compound since January 2020. If you’re wondering which billboard we’re talking about, it’s this… This sparked anger among the black students in Limkokwing so, an online petition was started by Samantha (Sam) Chin to urge the management of the university to remove the billboard as, according to Sam, it is insensitive and condescending to portray Lim as a saviour to African students.

“This perpetuates the notion that black people need saving, taking away their power and psychologically placing them in an inferior role.” – Sam in the online petition.

But we found that this isn’t the first time Lim was seen as a ‘saviour’ to the African community. And that might have started with how…

Before we get to how Lim helped Mandela, a quick history lesson on South Africa for you young Gen Zs.

Just in case you didn’t know, South Africa was under apartheid (a system of racial oppression) that was introduced in 1948 by the then ruling white supremacist National Party. In fact, we’ve been condemning this since Tunku Abdul Rahman became the Prime Minister – which was why our country didn’t have diplomatic relations with South Africa until apartheid was abolished in 1994.

In fact, the pressure against apartheid was strongly seen when Malaysia imposed its direct political and economical sanctions against South Africa. Dr Mahathir who was then Prime Minister (during his first tenure la ok) called upon the United States of America, Britain, West Germany and Japan to support his call. 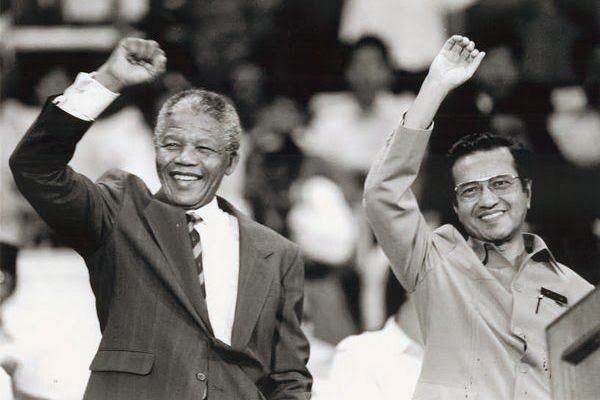 However, this sanction somewhat tak jadi because Britain opposed it. Even so, Malaysia, as a Commonwealth Committee on South Africa, still continued its effort to help dismantle apartheid and eventually lifted sanctions on South Africa. Mahathir even hosted Mandela when he was released from prison.

When Mandela was released from prison, South Africa held its first election. This was also around the time Mahathir introduced Mandela to Lim Kok Wing, who was then the founder of one of Malaysia’s leading local advertising firms. Seeing as Mandela was about to contest in a general election back in South Africa, Lim provided a winning strategy by advising Mandela’s African National Congress (ANC) to use a friendly approach.

In fact, he was the man behind the iconic slogan A Better Life for All and an election poster of Mandela surrounded by smiling children from various backgrounds. Besides that, Lim had also used his own company to produce 60 million ANC billboards. He was said to have helped craft what seems to be a successful voter registration exercise in South Africa’s first free and all-inclusive election.

And as you may have already known, Mandela won the election by becoming South Africa’s first democratically elected president and the rest is pretty much history.

“Your untiring efforts on our behalf have touched the hearts of us all and you have shown true friendship and solidarity with the people of South Africa in our endeavour to transform South Africa into a free, just and democratic country.” – Mandela wrote to Lim, as quoted by Malay Mail.

This historical event pretty much led Lim to open up Limkokwing University campuses in Africa countries like Botswana and Sierra Leone. And because of that…

He was even given a Commonwealth award for uniting students from 54 countries?!

See, Lim didn’t quite stop getting involved in African countries after he helped Mandela. As it turns out, that historical event gave him an opportunity to open up several overseas campuses in African countries starting from Botswana in 2007. While researching for this story, we came across how some people claimed that it is Botswana’s first private university but we found out that it may not be exactly the first private university in that country la.

However, when Lim wanted to open up a campus in Sierra Leone, the country was hit by Ebola in 2014. So, the launch of the campus had been deferred.

In Limkokwing’s website, Lim and his team was said to be the first institution who remained in the country to assist the govt and people eradicating Ebola while other expatriates apparently ciao from the country.

“We were the first institution to offer a helping hand to the government of Sierra Leone. We also ran a cohesive campaign, carrying the Stop Ebola message to the masses.” – Lim in an interview with The Star.

Well, what the team did was to come out with a ‘Stop Ebola’ campaign that was implemented under the National Plan for Eradication of Ebola. The reason for this campaign was to educate the people about the deadly disease besides boosting their morale. A newspaper clipping about the campaign by Limkokwing University.

Besides that, it seems as though Lim has been depicted as the ‘saviour’ of Africa. For instance, the ‘King of Africa’ billboard was supposed to be a ‘funny‘ gift to Lim from the university’s internal team for his contribution to African countries.

“As a tribute to somebody who spent so much effort in Africa. If you think about it, we have so much financial (problems) with Covid-19 but we are still persevered in providing education in university to African countries. I think that’s very humanitarian.” – Lum Weng Wah, designer of the billboard to BFM.

However, some people tend to disagree with Lum’s statement like a former employee at Limkokwing University, Naima Ablaal.

I just listened this interview @BFMradio and @malazdotcom said it alot but this is quick facts that i know if you listen the interview.@limkokwing you should be shamed Mr Lum do interview for something he had no idea the backlash bcuz i know you approved that billboard🤷🏽‍♀️ https://t.co/SK7aIqAZ8B pic.twitter.com/1sVBexLe1P

And as we dug deeper for this story, we noticed that the ‘King of Africa’ billboard is just one out of the many times Lim was depicted as such. Back in 2017, Lim was awarded with a Commonwealth Champions Award for uniting youth from 54 countries. The Commonwealth Champions Award is normally given to recognise individuals who have contributed to the Commonwealth, with the values and charter in mind. In the Limkokwing website, Lim was said to have helped young people, underprivileged and communities within the developing states.

In fact, Lim was said to be the Prime Minister’s Special Envoy to the Countries of the Southern African Development Community and Special Programme Coordinator back in 2017 as well. However, as far as our research capabilities go, we weren’t able to find more about this Special Envoy duty of his.

Besides that, we also came across several articles promoting the university, which may not be unusual anyways, but one particular article caught our attention. That is because it ended with these lines…

But this doesn’t just end here because apparently…

When the petition was making its rounds online, it sorta opened up a can of worms to other, more alarming issue. It all began when former university employee, Malaz Elnaiem, shared her previous experience of being excluded in a photoshoot that was supposed to showcase the university’s diversity.

There just weren’t enough students willing to come to campus and they wanted a specific amount of people so some of us (staff) jumped in. Boss didn’t like it and this is her response to Manager 1 #BlackInIvory pic.twitter.com/E9dAUPI0OL

And since this tweet, many have come forward to share their experiences too. You can check out some tweets here, here and here. Assuming you’ve read the tweets, you may have noticed how there’s a trend in the people who shared their experiences – the university’s employees (or former employees) who have experienced being treated differently due to their race.

As of the time of writing, Malaz posted up yet a new tweet of the university’s Senior Vice President for Corporate Development, Dato Gail Phung, who was apparently portrayed as the ‘Queen of Africa’ (they seriously can’t come up with another title??). Well, because we weren’t able to find more info on these allegations online (because news outlets don’t seem to pick this story up), we contacted Malaz to find out if the university management has reached out to her regarding her tweets. As it turns out, the management did contact her but not for the reason you may have in mind la.

“Yes, I have been getting a number of calls from a private number. I haven’t picked up. I also got a text from Tan Sri (Lim) trying to bribe me into silence. He offered me a job as a recruiter based in Europe.” – Malaz to CILISOS.

Malaz also informed us that she ignored the offer but has yet to receive any apology from the university management. In fact, she claimed that the management didn’t even acknowledge the incident that happened to her when she resigned in 2017.

At the time of writing, the management of Limkokwing University has reportedly taken down the billboard and issued a public apology. Lum shared in his interview with BFM that the banner (he claimed it’s not a billboard) has been taken down even before the petition was started.

However, as for other allegations, the only thing we know as of now, according to the BFM interview, is how Lum isn’t aware of this issue. He also mentioned that he would have to check with the management team on this but we found no further news on this.

In fact, we contacted the university to find out more on this but we have yet to receive a reply. :\ We shall just and wait see to what they’d have to say about this.