Most Malaysians will know Orangutans from our early school textbooks or as Wira, the joyous mascot that was used during the 1998 Commonwealth Games. What most of us DON’T know is that our Orangutans are much, much more evolved than we ever thought!

Here in our backyard, we have an entire population of untrained, untamed Orangutans that seem to be doing things that we thought only humans could do!

In a BBC video from 2011, David Attenborough, the famed English Biologist, can be seen observing a female Orangutan performing tasks that we would consider very strange. Filmed in Indonesian Borneo, the Orangutan was capable of rowing a boat across the lake using just her hands, sawing wood in half, and even washing clothes with liquid soap! To the casual eye, the Orangutan would appear to have been instructed to do these things by a trainer, but their behaviour has been validated by numerous primatologists and scientists as having been done all on their own.

In one scene, the video shows an Orangutan mother gently holding her baby while she paddles a wooden boat with her free hand. She isn’t just paddling the boat for fun, but actually uses it to get from one side of the river to the other! Check out the full BBC video below.

In another scene, the same mother can be seen holding a hammer while bracing a nail in between her lips. Although she is never quite able to hammer the nail into the block of wood, the act itself appears to display incredible dexterity and care with how she handles her tools.

The observance of their behaviour isn’t exactly new. The famous naturalist Charles Darwin, himself a great ape and unashamed of it, wrote to his sister in a letter describing the behavior of Jenny the Orangutan:

“the keeper showed her an apple, but would not give it her, whereupon she threw herself on her back, kicked & cried, precisely like a naughty child.— She then looked very sulky & after two or three fits of pashion, the keeper said, “Jenny if you will stop bawling & be a good girl, I will give you the apple.— She certainly understood every word of this, &, though like a child, she had great work to stop whining, she at last succeeded, & then got the apple, with which she jumped into an arm chair & began eating it, with the most contented countenance imaginable.”

The letter is indicative of how just how highly developed their emotions are. Not only was Jenny upset that she didn’t get her apple, her reaction to it was exactly like that of a human child!

176 years ago, our favourite colonialists, the English, got to witness their first great ape up close. Though nobody really knows where she was taken from, Jenny was a small, unbelievably adorable “Ouran outang”, as they were then called.

Kept in the famous London Zoo, the event was so spectacular that they decided to bring along Queen Victoria to interact with the fascinating creature. You would imagine that the Queen would’ve been thrilled at such a sight! …  She wasn’t. In fact, she was extremely conflicted about the whole thing. Jenny, the first Orangutan brought to England. Img from ZSL

See, during the 1800’s, when they were not too occupied with helping themselves to freebies in less developed countries, the English spent much of their time serving the Catholic Church. Catholicism, at the time, was a religion which had very, very strongly held opposing views towards theories that might disprove the concept of Creationism; a religious teaching that claims god created everything, and that humans have no animal equal.

When she observed Jenny the Orangutan, the Queen later wrote that:

“The orang-outang is too wonderful… he is frightfully, and painfully, and disagreeably human.”

The words “frightfully, and painfully” human almost seems to indicate that people back then were terrified of having another animal resemble humans! To be fair, most of us are still either scared, or angry that another animal might be just as a capable as we are.

So, how and why did these Orangutans start doing what they do?

The explanation to that is reasonably simple. These Orangutans in the BBC video began behaving this way after they observed nearby villagers performing tasks like washing their clothes and bathing with body soap: essentially it was a trial-and-error technique. But, it was in this exact same way that early human beings also began to adapt and evolve to their surroundings.

As disturbing as this might sound to many, some believe that both humans and Orangutans share what is referred to as a “common ancestor”. If you own a dog and have done a bit of research on its breed, you would’ve discovered that there are NO household dogs that were simply BORN that way. All domesticated dogs were, once upon a time, wolves that originated from Europe. These wolves, over a period of thousands of years, were selected for certain characteristics like physical size, length of fur, and even intelligence. They were then bred many times over to finally produce the breed that you see in your pet stores today. A simple chart showing how humans an apes evolved in different directions.

Think of our “common ancestor” as that African wolf. At a certain point in time, our common ancestor began to evolve in different directions. The ones that were forced to feed mostly on vegetables and leaves started to form larger stomachs and slower metabolisms, those that fed on insects and fruit became smaller and leaner, whilst those that were aggressive and strangely dominant became Malaysian politicians… Well no, they didn’t, but you get the idea.

It’s important to remember that human beings didn’t actually evolve from monkeys and other apes that you see today, but rather, some believe that we come from the same animal.

The theory of evolution is not a widely accepted idea, and understandably so – it goes directly against fundamental religious teachings, in particular, the teachings of monotheistic religions such as Christianity, Islam, and Judaism. It is interesting to note, however, that the Catholic Church now officially accepts evolution as academic truth after Pope Francis made an open declaration at the Pontifical Academy of Sciences.

Evolving in this manner is what secures the survival of a species. If an Orangutan, for example, was able to crack open more nuts using a hard rock while his fellow orangutan was unable to do so, the survivability of that first Orangutan would be dramatically higher than that of the one who couldn’t. This is known as “the survival of the fittest”.

“Yeah, but, do they know how to cook, solve complex problems, and attract members of the opposite sex on a night out in Jalan Telawi? Because I can do all of those things.” A wild Gorilla grilling marshmallows over a fire that it started itself! Img from Daily Mail.

Well actually, they sorta can. In a separate video filmed a few years ago, a Silverback Gorilla can be seen delicately starting a small fire using nothing but twigs and a matchbox. The ape then gently pierces a handful of marshmallows on a skewer made from a tree branch before gracefully setting it over his fire to be grilled. And that process too, is “delightfully” human.

Before placing the hot, sweet goo in its mouth, the gorilla carefully blows on the marshmallows to cool them down! Most of us don’t even do that, preferring instead to let the hot food scald our tongues to let us know if the food is cool enough to be eaten.

In fact, have you ever seen Guy Fieri blow his food before eating it? Gif from newscult.com

In a variety of controlled experiments, Chimpanzees have also been shown to be capable of solving complex puzzles and displayed incredible dexterity in doing so.

As for attracting members of the opposite sex, whilst most Orangutans don’t spend 3 months’ worth of salary on a bottle of overpriced wine at a club in Bangsar, they do exhibit a variety of human-like sexual attraction tactics to draw in potential mates.

Many choose their mates based on physical characteristics such as size, general health, oral health and how likely they are to beat another Orangutan in a fight.

Why haven’t we heard about these Orangutans and how come we’re not more excited about it?

It isn’t very normal for any species, humans included, to care about the wellbeing of any other species apart from its own. We don’t see tangible benefits and so, we don’t do it. But even so, unlikely friendships and even “adoptions” have happened across different species. 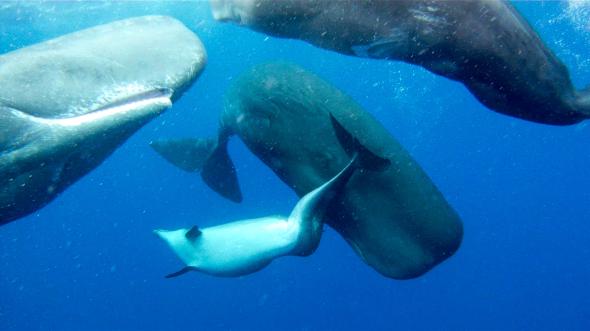 Like when this bottlenose dolphin with a spinal deformity rubbed against a sperm whale. Photo taken from National Geographic/Alexander Wilson and Aquatic Animals

Yet the conservation of these apes is incredibly important. Their survival will allow us to learn even more about our species than what we thought possible. Great apes function as a crucial link between us and our common ancestor and could tell us everything from how humans are likely to evolve in the future, to where we came from, hundreds of thousands of years ago.

What can we do to preserve their environment and save them in the process? Well, you can visit them in Borneo! The entrance fee that you pay goes directly to the conservation of these animals, and also goes into research that could further ensure their survival. Alternatively, you could also donate to any one of the MANY primate foundations that exist in South-East Asia and the rest of the world.