Many of us may have already heard of the practice of buying fake certificates in Malaysia, whether it’s an SPM, diploma, or degree cert. Back in 2012 already a senior official at UiTM  said that the issue wasn’t new, but a growing concern.

Recently however, The Star ran a story about how one guy (we’ll call him Dr Conman) managed to con his way to the very top of the world of pharmacy, and becoming a life member of one of the top pharmaceutical organisations in the country. Dr Conman referred to himself as a ‘Datuk Seri Dr’ (like Mahathir’s level before he became a ‘Tun’) and had been a member of the Malaysian Pharmaceutical Society (MPS) while not being registered as an actual pharmacist with the Health Ministry. Although Dr Conman was a LEGIT member of the MPS, he also claimed to be affiliated with the Health Ministry and organisations in other countries, all at the tender age of… 28!

“Organisations we contacted, including those in the United States and India, either denied admitting him or had admitted him without realising that the documents and information he submitted to them were fake. After checking with the Malaysian Medical Council, one of the medical associations ended his membership because he wasn’t really a doctor.” – A victim of Dr Conman, as quoted by The Star

His victims also voiced their concerns on just how many of these fake professionals are out there with fake certs.

How big of a problem is fake certs in Malaysia?

It’s hard to tell in terms of numbers. The only figures we could get were from 2012 when the Selangor police said they were on the lookout for 525 people who purchased fake certs from a syndicate that had been around since 2003! But what’s scarier is that some of them are medicine degrees.

In other words, many doctors in Malaysia may not be certified, and just like Dr Conman, they may be giving people wrong diagnosis and medication! We know it’s a painkiller but you get our point la. Original image from wisegeek.com

Ok, story time. We know ugaiz love stories, and this one is from a columnist called ‘Concerned Civil Servant’ on Malaysiakini. There was this other conman with a ‘PHD’ who was hired to teach at a local university. Not only did he teach, he mentored post-graduate students and applied for research grants. Which only resulted in students not learning and the university wasting money.

So this goes to show that people who work with fake certs actually affect the people around them. In fact, it will take jobs away from people who actually have legit certs.

And it’s not just academic certificates that have been faked by Malaysians. There is also news about fake medical certs (which could land you in jail), marriage certs, and even this one case of a Malaysian having a fake certificate on being knighted by the Queen of England! 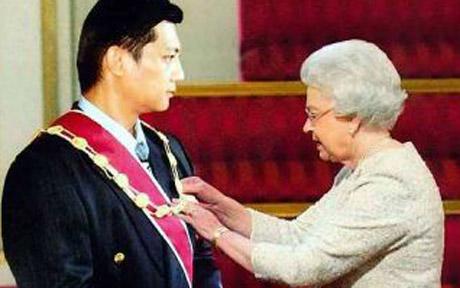 Complete with pretty fake looking picture of him being knighted. Image from telegraph.co.uk

But still, without the numbers, we still didn’t know how rampant these fake academic certificates are. So what we did next was this….

We tried to buy a fake cert of our own!

Yeap, some reports claimed that these fake certificates were easily obtainable online. We Googled, and all the results actually pointed us to many websites which claimed we could buy fake certs from them. It was easier than eating cake.

So we tried to obtain 2 fake certificates (for journalistic purposes of course) and here’s how it went down.

We tried to get one from a website called phonydiploma.com. While with a name like that, you’d suspect that it’s all a prank but they do have things pretty well covered. They have like pages dedicated to what they guarantee and what they will not do, and even reviews from satisfied customers.

Check out that logo.

Although it’s an international site, they actually have a list of local universities that you can choose from! Some of them include Multimedia University and Universiti Teknologi Malaysia. We requested for a sample honours degree cert from Universiti Kebangsaan Malaysia, and this is what they sent us in an email, aside from info like when can it arrive, and how to make payment. And we may actually have tried to buy one if not for the fact that these things cost a minimum of 425 USD per piece!  That’s like about RM1700 right now. (This was the price that was quoted to us via email, even though they said 275 USD on their website.)

But if this is a bit hard to believe because the website is called “phony diploma”, maybe the next one would hit closer to home.

From Google, we actually found a website that provided us an email, and an email exchange that eventually got us a phone number. In our Whatsapp exchange with the dealer, this is what the conversation eventually came to. We gotta hand it to this guy cos he was quite ‘responsible’ in a way la. He straight up told us that it’s RM600 per fake SPM cert, and that you’re prolly not going to get a gomen job anyway, and it’s a pay-first-receive-later, and if you takut kena tipu then just don’t use his service. Price is non-negotiable and delivery is free all across Malaysia. Oh and he’s been providing this service since 2012. One of the sample fake certs that he sent to us.

RM600 was a bit steep (our M.E. gave us a budget of RM30 only) so we tried asking for discount. The guy say cannot, so sadly our investigations ended without us actually buying any certs. But this implies that with the right amount of cash, you could actually buy an honours degree or an SPM cert. And if it’s really that easy, it won’t be so surprising if there a lot of fake certs out there.

But now that we know it’s quite easy to get our hands on one these, why isn’t the gomen doing more to clamp down on them? Well maybe it’s because of the fact that….

It’s actually not a crime to own a fake cert!

Back in 2013, Serdang MP, Ong Kian Ming asked our gomen what measures they were taking to punish those who had fake certificates. This was the reply of a minister in the PM’s Dept.

“If he wants to just hang his degree at home and look at it, for his personal use, what can we do? If we want to take action then we must draft up new laws.” – Minister in the Prime Minister Department Datuk Seri Shahidan Kassim, as quoted by The Malay Mail Online In other words, we don’t have ANY laws in regards to people owning fake certs. BUT he did add that to deal with this, the gomen needs to draft new laws and that currently, any civil servant caught with fake certs would be sacked immediately.

So until we have this law in place, we really can’t stop anyone from buying these fake certs.

But if no law, how to stop people with fake certs from applying for jobs?

Remember that story we told you just now, by Concerned Civil Servant? Well he/she adds that the academic community in Malaysia still doesn’t have any measures to determine whether a cert is fake or not.

“The academic community in this case still utilises an old-style system of ‘trust’ regarding the authenticity of the applicant’s degrees and what the applicant states in his/her resume.” – Concerned Civil Servant, on MalaysiaKini

And based on the report about Dr Conman getting into the Malaysian Pharmaceutical Society, and even this story of Bursa Malaysia fining a director for a fake cert, it seems that it could be the case in other industries as well. But how to make sure employers don’t hire people with fake certs? Well, this news portal suggests that the most secure way is to call up the university themselves and check for 2 things.

But aside from the employer’s perspective, The Guardian says that using a fake cert can also be disasterous for the person itself.

“All industry experts agree that faking an academic qualification is like carrying a ticking timebomb with no idea of when it could go off. It could happen when you claim the qualification for the first time, or it might take years before it explodes in your face – taking your riches and your reputation with it.” – Columnist David Williams, on The Guardian

So a fake cert may bring some short term gains, but at the end of the day, is it really worth the risk? You decide.