It’s been said that the 3 most common road signs in Malaysia are “BERHENTI”, “KURANGKAN LAJU” and “UBAT LELAKI KUAT”. Many people are at a loss when it comes to explaining the third one, especially to kids.

The main problem is this: If you want to give an honest explanation about Ubat Lelaki Kuat to a curious 8 year old, you have to talk about sex.

The second problem is: You don’t know how to do that.

The good news is that you’re not alone. Many people find it difficult to talk about sex with adults, let alone with kids! Doesn’t matter if they’re 3 or 13, the general perception seems to be that if you consider them kids, it’s probably too early for them to be knowing about “stuff like that”. The world over, many people worry that talking about sex will rob the kids of their innocence, or encourage them to have sex earlier. In Malaysia, sex and sex education remain taboo subjects in both the private and public sphere. For many a Malaysian, the mere mention of the words “penis” or “vagina” may leave them feeling like they’ve just been showered with vulgarities coated in cow dung (that’s worse than just vulgarities). Remember back in 2002 when The Vagina Monologues was (were?) banned following complaints by people who had a problem with the word Vagina? For the life of me, I can’t understand why. It’s the medically-accurate term to describe that part of the body! 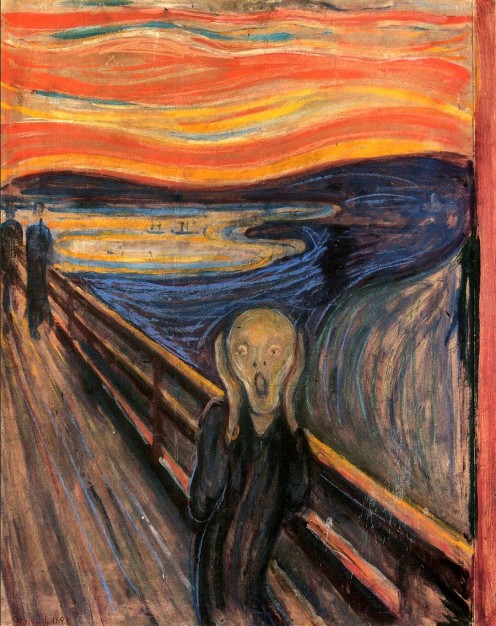 “Do you know where the pen is?”  Image credit: Edvard Munch and www.popspotsnyc.com

But what happens when you don’t talk about sex?

Lots of teenage pregnancies, that’s what. Between January and March 2013, a total of 1048 teenage pregnancies were reported in Malaysia  – that’s an average of 12 a day. So bad in fact that our government had to step up and address the issue by introducing an abstinence-only sex education syllabus into selected classrooms across the nation. Apart from the fact that abstinence-only sex education has been proven not to work, the way the LPPKN plan to implement the Malaysian sex ed syllabus has led many to conclude that it will be ultimately pointless (read more about it here),

It’s essentially telling kids “Don’t have sex, it’s a terrible thing, condoms don’t work, and you will get an STD every time you even think of doing it. Unless you are married. Then it’s wonderful, and you will be totally safe.”

Sure, telling kids abstinence until marriage is the best way to avoid an STD or unplanned pregnancy is accurate on the face of it. But by not telling them about condoms* / other methods of contraception, we are not providing them with the information on how to protect themselves against STDs when they do become sexually active (and this applies whether they are married or not).

Did you know that in 2013, the Ministry of Health reported that 34.9% of Malaysian females infected with HIV were HOUSEWIVES? So much for marriage being effective contraception.

*The Malaysian sex ed syllabus will not include a condom demonstration and many abstinence based programs flat out tell teens that condoms don’t work. Research has shown that this approach discourages condom use when they become sexually active, and increases the risk of STD infections.

So what’s the alternative? You want me to tell teenagers to go and have sex freely??? Why you look at this issue in such simple terms???

Sex education is about so much more than just sex! Age-appropriate comprehensive sexuality education (that has been proven to work) covers a wide range of topics that affect sexuality and sexual health. So, in addition to talking about the act of sex, it also includes discussions on body image, puberty (growth and development), contraception, sexually transmitted diseases, pregnancy, sexual behaviour, sexual health, and yes, even abstinence.

I’ll bet now you’re thinking, “Wow, that sounds great! Teaching the right amount of info at the right age, giving kids the tools they need to stay safe and make informed decisions. Why aren’t we teaching that kind of sex ed ??”

The short answer – and the same reason why we don’t talk about sex in general – is because even though many are all for it, a lot of people would just not be able to handle it.

To those guys, I say the same thing i’d say to a kid with a plate of broccoli – “Just because you don’t like it, doesn’t mean you should reject it, because it’s good for you.” So when’s the best time to start teaching them about this stuff?

Planned Parenthood in America says it’s best to start talking with children about sexuality in early childhood. They find that teens who report having good conversations with their parents about sex are more likely to delay sexual activity, have fewer partners, and use condoms and other contraceptives when they do have sex.

Parenting dot com has even compiled an age-by-age guide on talking about sex to kids starting from as early as birth. Please note that this is their guide, not mine. And sorry lah, my editor forced me to write this super long intro so you can better understand the bigger issues at play, and so people don’t accuse us of propagating free sex amongst young children or other nonsense like that. Can’t be too careful these days you know…

You still haven’t told me how to explain Ubat Lelaki Kuat to kids. Faster la…

Ok ok. So Planned Parenthood also recommends that parents should look out for what they call “teachable moments”. These are moments in everyday life that provide conversation starters between adults and young people, for example a scene in a movie where a young person is going on a date, or seeing a pregnant neighbour.

So instead of being annoyed by those ubat lelaki kuat posters, use them as teachable moments. They’re everywhere, and getting harder and harder to avoid anyway. 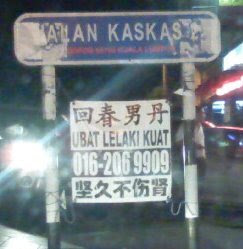 Me: “Remember when we talked about what sex is? The penis has to be hard to fit into the vagina during sex. This is called an erection. Some people experience difficulties getting an erection. I think some of these medications are designed to help with that amongst other things. But from that poster, we don’t know if they really work, because we don’t know who’s selling them, if they have been approved by the relevant authorities, or even what the ingredients are.” 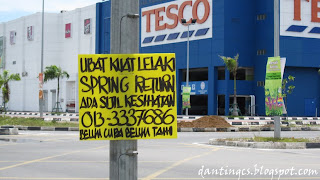 Kid: “What does “spring return” mean?”

Me: “I think ‘spring return’ in this case is a cheeky reference to the ability to have an erection again. When your penis is hard, it does a sort of spring up motion, so I guess that’s where they got that idea. As for the medical certificate, I’m not sure if they’re saying they’ll give you a medical certificate with the meds, or if they have a certificate to practice medicine, or if the product is medically certified to be effective. There’s another reason I personally wouldn’t trust these advertisements.”

Me: “To be honest, I’m not even sure what kind of toy this ad is selling because it’s not specified.”

Note: This is the truth. Also, bear in mind, the kid in my example is 10 years old. At this age, I would spare him the Powerpoint presentation on the variety of sex toys available in the market until he’s a little older.

Yes, it certainly can be if you’re not used to it, but just remember that it’s also very important.

(Those of you who have skipped to the end, please scroll back up and read my super long intro on why it’s important to talk to kids about sex.)

On a serious note, it’s understandable how cultural norms may make it difficult for many Malaysians to change tact in this regard, but it’s never too late to start giving young people the guidance they need to stay safe and in charge. With practice, you’ll get the hang of it, and will surely develop your own unique style of communicating with young people effectively. And they will thank you for it. Good luck!