It’s not often that we start our articles with good news. Last week, PM Najib revealed a special court for sexual crimes against children – the first of its kind in Southeast Asia. This was just one of the moves in a series of gomen’s effort to fight such crimes and improve sex education across the country.

Even the recent ‘gay prevention’ video contest was reformed to drop ‘gender confusion’ from the competition after huuuuge uproar locally and internationally (refer to our article on this). 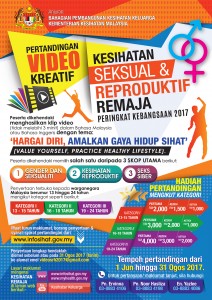 On top of that, our National Population and Family Development Board (LPPKN) has also worked really hard through its PEKERTI programme by giving sex education across 33 schools in 2014. While we clap our hands seeing the gomen trying to be better, there seems to be a bigger question at play:

How are these things supposed to work when… our sex education hasn’t really changed since 1989?!

It’s already bad enough that our parents become shy when it comes to talking about sex… so how laa to make these policies effective when we don’t really dare to talk about it with our parents or in school??

Okay, first up: How’s sex education in Malaysia like?

It’s a tale as old as Malaysia that our sex education was always based on… abstinence (a.k.a no sex before marriage).

According to The National Population and Family Development Board (LPPKN), sex education in secondary schools focuses on stopping teenagers from having sex. A representative from LPPKN made this clear:

“In this situation the module teaches them techniques on how to refrain from having sex to rejecting a sexual advance” – Dr. Hamizah, Head of LPPKN’s adolescent reproductive health unit

So what does that look like? It’s basically a same same but different situation between public and private schools in Malaysia. The general scene for sex ed here follows LPPKN’s guidelines for teenagers, Cakna Diri which means caring for yourself. It’s stated here that the point of sex ed in Malaysia is to encourage abstinence among our youth.

In certain private schools, upper sec students have been required to attend workshops like No Apologies, a curriculum created to provide character based abstinence education. To give you a taste of how it’s like, here’s a video that No Apologies plays in its workshops:

If you got through the video, you’ve been told that sex before marriage comes with lotsa regrets etc., and it was less of a scientifically based justification on sex. Students barely heard anything regarding the harms or precautions that should be taken when engaging in sexual interactions! On top of that, ‘pledge cards’ have been given out to students, and it looks like this: 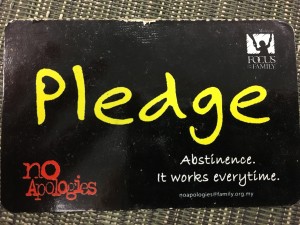 Pledge card from No Apologies 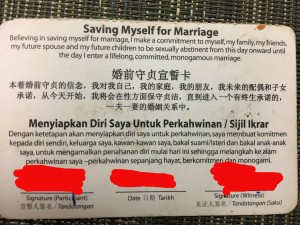 Pledge Card from No Apologies

And guess what, No Apologies itself has reached more than 92K participants, and almost 84K of them signed this pledge. While it’s definitely okay to pledge for this, the fact that modules like No Apologies barely touched on the science of sex leaves our youth at a disadvantage when it comes to proper sex education.

Now, public schools? Well, ask any Form 3 budak now about what they look forward to in Form 3 and they’ll probably tell you about Chapter 4: Reproduction in Science. Basically, students learn about the reproductive systems of men and women. It also includes the science part about how babies are made (minus the actual action of making that bebeh) and periods as well. There’s also mention about certain kinds of contraceptives available, but it doesn’t actually teach kids HOW to use them. 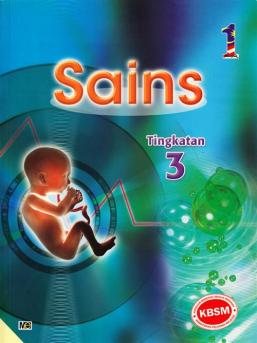 All the Tingkatan 3 boys fav chapter 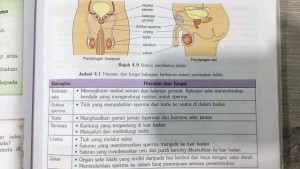 Yeah so… you get the picture. Kids barely get any crucial information they need from schools on anything else other than identifying human body parts, they don’t dare to talk to adults about it and… we’ve got a problem here. We know whatchu thinking though…

“Later my kids learn all these things and go simply have sex how?”

Now, there is the argument that if kids tau what’s all this condom and IUD, they’re more encouraged to have sex. A study on kids from the 1960s showed that slightly more kids were having sex as early as 16 (22% to 25%) after learning about contraceptives. BUT the mean age of first intercourse was still higher for kids who had contraceptive education before having sex (17.2 years) compared to kids who didn’t have any contraceptive education (15.2 years) whatsoever!

It has been proven that proper sex-ed doesn’t encourage kids to have sex earlier, but instead delay sex by teaching kids to make sure they’re ready to enter a sexual relationship. Kids then become more responsible and make better decisions about their sexual health when they’re given the proper tools and knowledge.

Fact is, teens will still get curious and possibly try sex even though we grill it into them that they should wait till marriage. A study proved that 50% of Malaysian kids already had sex had their first time before they were 14! So instead of continuing abstinence-based programs that clearly don’t work, it would be best for the kids if we prepared them to protect themselves and at least practice safe sex. Seriously, do trust us when we say, Malaysian kids dunno as much about sex as you think. 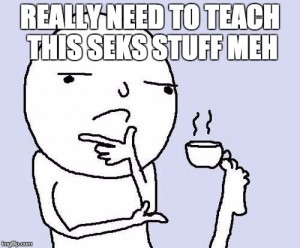 Here are some shocking misconceptions our youths have about sex

It’s not the absolute worst, but it ain’t the prettiest either. It was understandable if kids didn’t know of certain contraceptives, BUT OMG there were certain statistics that were pretty shocking to discover about our youth:

1. They think that using two condoms is better than one

According to the 2015 Malaysian Youth Sexual and Reproductive Health Survey conducted by Durex, 1 out 5 Malaysian kids think that using two condoms at the same time is better than one.

FACT: For ugaiz who seriously think that, the answer is clearly NO. As explained by the report itself, the friction created by the two condoms would actually make it easier to break. Using one condom during your special time is enough, as it is 99% effective against unwanted pregnancies and STIs through effective use. 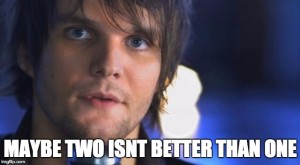 NAH, BACA:
Why are Msians arguing over this Melaka girl winning a U.S. award?

2. They betul-betul think that “trust” will stop pregnancy 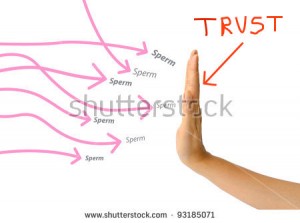 FACT: “Trust” does NOT stop sperm from swimming up to meet the egg. Trust is not like a command for the sperm to just die or make like a giant U-turn okay. Ugaiz need to be safe by using protection!

3 . They also think that women can’t get pregnant during their periods

The Durex survey showed that 51% of the youth believed in that statement!

FACT: Women CAN get pregnant during the time her fertile windows are open. If a woman’s cycle is shorter (eg. 12-24 days), they can ovulate and earlier and have higher chances of getting pregnant if they had sex just before. This is coz sperms can survive in their bodies for up to 5 days.

4. They think that washing vaginas with water/liquid (douching) will prevent pregnancy

According to the survey, 10% of the youth believed that douching was an effective form of contraception! (FYI – douching is where a woman washes the inside of her vagina with liquid.)

FACT: Douching does not “wash out” the sperm from the vagina. In fact, douching affects the natural chemical balance in healthy vagina as healthy bacteria thriving there are being washed out. It can also lead to an overgrowth of unhealthy bacteria causing yeast infections or vaginal infections.

From temporarily banning Beauty and the Beast just coz LeFou was gay, you can say that the LGBT community have it really rough in Malaysia. The study conducted  from 2013  showed that some of Malaysian uni students thinks that lesbian and gay relationships constitute… sexual harassment?

But apart from misconceptions the youth have about contraceptives and LGBT people, the main point of sex-ed is to PROTECT kids. So how does sex-ed protect kids other than preventing unwanted pregnancies and STDs??

Earlier this year, the Sexual Offences Against Children’s Bill was passed in the Dewan Rakyat from the Predator in My Phone documentary by R.AGE. The Bill was set to combat the issue of sexual grooming which targets children. Dr. Amar Singh, Head of Pediatric Department and Senior Consultant showed that at least 1 in 10 children have been, or continue to be sexually abused.

A documentary series from R.AGE

What makes this even more concerning is that many cases go unreported, meaning that this statistic might be underestimated! Although the Bill will help protect kids and send warnings to creeps, it only counts if it IS reported. According to The Sun, there have been 5052 cases of child sexual abuse in the past 5 years while there have also been unreported cases due to the involvement of family members of victims. What’s more important is that we teach kids the concept of “consent”.

So what is consent?

It’s a clear and unambiguous agreement, expressed outwardly through mutually understandable words or actions, to engage in a particular activity 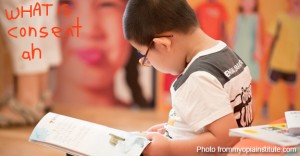 Why do we need to teach kids this? – The major form of sex-ed in Malaysia, abstinence doesn’t teach kids how to say NO to unsafe situations and inappropriate physical contact. It just tells them to put off sex till their married. It doesn’t teach them how to PROTECT THEMSELVES from sexual predators that pry on their immaturity and take advantage of them.

Kids need to understand they have the right to be safe and we need to teach them to know how to recognize abuse and respond to it. Unfortunately, marriage has been used as a solution when young girls get pregnant as a result of their rape. These young girls mostly drop out of school, preventing them from earning a liveable wage and trapping them, along with their children in a vicious cycle of poverty. By teaching our kids consent, we empower them to protect themselves from sexual predators and give them a better shot at life.

Eh, we’re a conservative country ma…. what you expect?

Ya but… even our fellow conservative neighbours are making changes! Few months back, a textbook made for Standard 1 students in China featuring actual sex-ed went viral on social media. 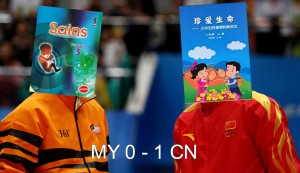 It featured reproduction systems, tackled genders and sexualities, guidelines on saying no to sexual advances by adults and *GASPS* actual pics of penises and vaginas. While there was a huge backlash from some parents, other citizens and parents stressed the need for this as teaching kids only developments of the human body is no longer enough.

A NSFW glimpse into the textbook

India also jumped on the bandwagon (sorta) when their Health Ministry said it’s okay if a boy has feelings for another boy. Although sex-ed is banned in 6 states in India, India’s been making small steps by launching a resource kit used by 160,000 people in villages so that those people can in return teach the younger kids about health and sex.

Now we’re not saying that you should be talking about sex all day with your kids… but there’s no harm in them knowing better! It’s due to a mainly character, abstinence-based sex ed that many teenagers become misinformed in things they need to know about their bodies and surroundings, like this rape survivor who didn’t know that having sex would get her pregnant. Some researchers from Harvard also published a report on how discouraging condom use and misinformation about abortions harm women and girls as well.

So ugaiz, we NEED to realize that providing proper sex ed to kids don’t actually put them at risk of unwanted pregnancies or STDs, but it’s actually the other way around. Malaysian kids deserve better information about sex, and abstinence-based sex education no longer cut it for them. 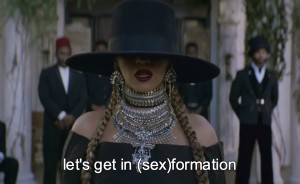