[This article was inspired by SOSCILI’s article. Click here to read it.]

For many years now, the Malaysian Indian Muslim community has been seeking to be recognised as Bumiputeras. Maybe more surprising than that, the Federation of Indian Muslim Associations (PERMIM) insists that Indian Muslims should be absorbed into the Malay community too!

“We have not merely adopted the Malay language and customs but have been fully integrated into the local community. We should be considered Malays in line with the nation’s move towards a single (Malay) society.” – Datuk Dr Syed Ebrahim Mohd Ismail said in 2014

Recently, PM Najib has expressed support for that request, and said that the gomen will do their homework on how to make that a reality.

“I accept that Indian Muslims are Bumiputeras. The question of how it will be implemented, we will study this further, whether it is through administration, or through the method asked for, which is through gazetting.” – PM Najib said at an Indian Muslim NGOs Hari Raya open house event in Serdang, Selangor

The incident has gained a lot of attention, and sparked a lot of discussion as to what the terms “Bumiputera” and “Malay” even mean in the first place. Can someone just suddenly get recognised as a Malay? What qualifies you to be a bumiputera in the first place? Our cousins at SOSCILI did the research, and here’s what they found:

It was our former conquerors that introduced the “Malay” term SOSCILI interviewed Malaysian historian emeritus Prof Tan Sri Dr Khoo Kay Kim, and we learned that the whole thing was started in 1913 by the British when they passed the Malay Reservation Enactment, and they needed legal definitions of what “Malay” means.

According to Prof Khoo, the British actually divided Malays into 2 categories:

There were many divides in the Malay community itself among the smaller Islamic ethnic groups. Who could forget the first Malay Congress that was held in 1939? Even then, they didn’t invite the Penang Malays Association because they were Indian Muslims. It has happened even among the Singaporean Malay community, where they sidelined the Indian Muslims and Arab Muslims. “A person who professes the religion of Islam, habitually speaks the Malay language, conforms to Malay custom.” – Article 160(2) of the Federal Constitution

And speaking of Bumiputeras…

There’s no such word as “Bumiputera” in the constitution

You know that “special rights of Bumiputera” people always talk about? Well, it turns out, there’s is no such term/word as “Bumiputera” in the Federal Constitution. Constitution expert Prof Abdul Aziz Bari points out that “Bumiputera” is a term coined during the introduction of the New Economic Policy (NEP) after 1970. In the constitution, it is actually worded like this:

“It shall be the responsibility of the Yang di-Pertuan Agong to safeguard the special position of the Malays and natives of any of the States of Sabah and Sarawak and the legitimate interests of other communities in accordance with the provisions of this Article.” – Article 153(1) of the Federal Constitution

If you want to ctrl+f the Federal Constitution, you can find it here. According to both Prof. Khoo and former Judge Datuk Mohd Noor Abdullah, “Bumiputera” is a term used to include non-Muslim natives or “anak negeri” of Semenanjung, Sabah, and Sarawak. That means people like the Orang Asli (in Semenanjung), Iban (Sarawak), and Dusun (Sabah). But in common usage, the “Bumiputera” term seem to encompass Malays as well.

Definition of Bumiputera for entry into UiTM. Screenshot from uitm.edu.my.

So the bottom line is: “Bumiputera” is not a legal term. It is commonly used as an umbrella term to denote those who have special rights. So while it’s not wrong to group Malays as Bumiputera, Prof Khoo says there are still many legal/official/ constitutional differences between Malays and Sabah and Sarawak natives:

NAH, BACA:
Confused about Covid-19 fake news? This Malaysian website fact checks it for you

So, how exactly can Indian Muslims be considered Bumiputeras?

Constitutionally speaking, all it takes is for Malaysia to officially include Indian Muslims in the category of “Malays”, because as we discussed previously, there are 3 criterion to be considered “Malay”, and it doesn’t say someone has to be of a specific race or ethnic group. Practically, no one is really sure how this can happen, as this probably never happened before on this scale. 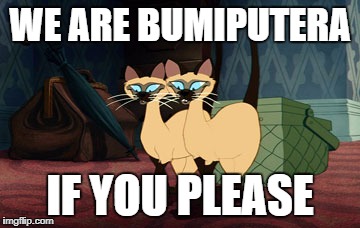 If we consider the Orang Asli, you would notice that they aren’t constitutionally recognised in Article 153(1), as mentioned above. However, they are given the same special rights as the Bumiputera according to the Aboriginal Peoples Act 1954, and is also included under the “Bumiputera” term.

Coming from a complicated mix of ethnicity, other ethnic groups like the Baba Nyonyas and Chetti community both tried to be recognised as Bumiputeras too. While the Chetti’s request got turned down before, there hasn’t been any news on the Baba Nyonya’s request.

“While they may look like Indians, they do not speak Tamil… The Chetti’s don’t just use conversational Bahasa Malaysia, they even use pantun and peribahasa. Not only that, they even use Bahasa Malaysia in their rituals and prayers!” – Uthaya Sankar, President of Kumpulan Sasterawan Kavyan (Kavyan) wrote in Malay Mail Online

But there was a group that managed to get the Bumiputera status, well… sort of. The Portuguese community in Malaysia was almost granted Bumiputera rights during Mahathir’s era. Now they can only boast about investing privileges with Amanah Saham Bumiputera (ASB). But Peter Thomas Gomes, Chairman of  JKKK Perkampungan Portugis said they are content without the “Bumiputera” status.

List of groups eligible for the investment. Image from asnb.com.my

But surprisingly, the Siamese in Malaysia are actually granted full Bumiputera privileges. But it seems even in the gomen itself, there were a lot of confusion and miscommunication on this.

“The acknowledgement is almost meaningless because Siamese applications still get turned down by government agencies and branches because they say we are not Bumiputera.” – Datuk Seri Boon Som a/l Inong as reported by Sinaran Harian Whether or not Indian Muslims can be Bumiputera, it doesn’t have to involve the constitution yet

The confusion was probably caused by the assumption that Bumiputera rights are guaranteed in the Constitution, and some might assume only specific groups can be Bumiputera, but the fact is that there are divisions even within the “Bumiputera” group, and their rights and power actually differ from one another according to different laws.

But the consensus among experts is clear, it doesn’t matter if PERMIM wants to be “Malay” or “Bumiputera”, neither would require amending the Federal Constitution, as the case with the Siamese community clearly demonstrates. Dato’ Seri Mohamed Nazri bin Abdul Aziz also once said the important thing is for the gomen to acknowledge the community in question. Hopefully this clears things up for ugaiz, and useful to those that might wanna consider becoming Malay. But, if the situation turns into a dispute, Prof. Khoo said that they would have to refer to the courts for a decision.

“When it comes to problems with legal definitions, only the judiciary has the right to make those decision. The courts will decide what the definition of the words mean.” – Prof Emeritus Tan Sri Dr Khoo Kay Kim told SOSCILI