Imagine this is an SPM question that asks you to write a karangan on the effects of land development. What will your answer be? Global warming? Landslides?? Flash flood???

One thing that you may not consider in your answer options would be the effects that are borne by the Orang Asli. Yes, that includes losing their homes and customary land altogether just like what happened in the past week to the Mah Meri tribe in Bagan Lalang or the Semelai people in Kampung Paya Berangan, Pahang.

Angered by these back-to-back incidents within a week, netizens started spreading awareness on this matter on social media using the map below, which is supposed to represent what’s left of the Orang Asli settlement in Malaysia. But since we weren’t able to find the real source to this map, we decided to talk to a person familiar with the matter, Dr Colin Nicholas of the Centre of Orang Asli Concerns. And the first thing he said would be a bit of a bummer to most of y’all because…

The map that went viral is actually INACCURATE

“The intention (of the post) is good. However, the evidence (shown on the map) is not quite correct.” – Dr Colin to CILISOS.

For one, we went through the research papers listed on the footnote of the map and the closest thing to the map that went viral was this map that shows the distribution of Orang Asli in Peninsular Malaysia. Img from National Library of Medicine

The only difference between these two maps, though, was that the one that went viral doesn’t indicate how many Orang Asli each dot represents.

Other maps we found from other research papers indicate where the tribes are located and the population of the Orang Asli in Peninsular Malaysia. 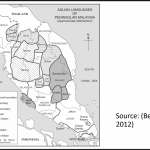 The location of Orang Asli tribes in 2012. Img from asiapacific.anu.edu.au 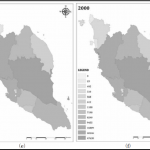 “The Orang Asli settlements have increased from 1950 up to now. In 2015, there were officially 853 villages and in the area we work in (Pahang), there are at least 45 more Orang Asli villages that were created in the last three to four years.” – Dr Colin.

The Orang Asli villages that are not registered are not necessarily illegal because, according to Dr Colin, the govt does recognise them. The only problem was that the govt might not wanna go through the hassle of registering these villages. Oh, y’know the paperwork and providing them with facilities or funds to develop the villages.

If the map that went viral doesn’t represent the population or distribution of Orang Asli in Peninsular Malaysia, then what did it represent?

Dr Colin said that it should be representing the Orang Asli occupation because, despite the increase in the number of villages, the size of the Orang Asli customary land recognised by the govt has reduced drastically over the years.

“It’s different when you talk about Orang Asli customary land recognition. That’s because the size of a village that is recognised could just be 5 acres or 10 acres. Meanwhile, the Orang Asli in that area may claim 500 acres or 1,000 acres (of land) but the government is only recognising a portion of it.” – Dr Colin. The Orang Asli has been living in the forests along rivers for hundreds of years. The land where the Orang Asli live is typically known as the customary land or tanah adat. The land is not just their home, supermarket, and pharmacy but also where their heritage is – history, culture, belief, economy, and even politics.

Dr Colin even likened the customary land to the Orang Asli’s ‘country’ – basically a place where you and your identity are attached to. So, losing a customary land is equally as bad as someone snatching away your country or identity from you.

Under the Aboriginal Peoples Act 1954, there are three types of Orang Asli land:

According to Dr Colin, back in the late 50s when there were 58 aboriginal settlements, the govt planned to gazette 110,000 hectares of land for the Orang Asli. Unfortunately, just like a lot of promises made by the govt… Soz Najib. People have been capati-ing their promises before you do.

…and they had only carried out less than a quarter of the plan.

When the govt does not gazette the Orang Asli customary land, Dr Colin shared that this exposes the land to encroachers – individuals, companies, land developers, loggers, or even state govts themselves, who take away the land for other purposes.

A recent example was what happened to the Mah Meri tribe in Bagan Lalang who were evicted from their homes to allow the construction of a resort.

News headline from The Vibes

If you followed this news, you would know that the Selangor govt claims that the land belongs to them. Dr Colin said that this is a classic case of the state govt not recognising and gazetting the Orang Asli land.

Nowadays, the Department of Orang Asli Development (Jakoa) is responsible for mapping and surveying the Orang Asli land besides applying for these lands to be gazetted. And, as of 2014, only 29,166.66 hectares of land had actually been gazetted although the population of Orang Asli has increased over the years (there were about 160,000 Orang Asli then).

Unfortunately, even gazetting the Orang Asli customary land does not guarantee that the land truly belongs to them.

“The strongest security the Orang Asli community has is the Aboriginal reserves but even that is not secure because the state government can cancel the reservation at any time it wants, with just a signature from the Menteri Besar, without having to inform or pay compensation to the Orang Asli for their land.” – Dr Colin.

Sadly, this happens because the law that is supposed to protect the Orang Asli doesn’t constitutionally recognise any of the aforementioned lands at all. So, the Orang Asli may still face eviction or resettlement.

But the Orang Asli community is fighting back The orang asli placed a barricade to prevent outsiders from coming into their land. Img from Rojak Daily

In the past, Dr Colin highlighted that the Orang Asli may have the option to retreat deeper into the forest whenever their lands get encroached. However, they are not able to do that anymore simply because there’s nowhere else left to go.

So, the only option these Orang Asli have left is to fight for the rights to their own land. The Orang Asli had done so many things to prevent encroachers from getting their land like putting up barricades and even lodging police reports but Dr Colin said that these efforts oftentimes fail.

What may work, though, is to bring cases like these to the court.

“We’ve been involved in 9 court cases like these and won in all of them in terms of recognition of Orang Asli lands.” – Dr Colin.

However, even that does not really guarantee that the Orang Asli would be getting their lands back.

This may be why Dr Colin emphasised that the solution to this issue is the political will and action from the govt to recognise the Orang Asli land, which is what the govt really lacks. But until that happens, the fight for the rights to customary land may seem far from over for the Orang Asli in Peninsular Malaysia.