A Facebook user named Alex Bouman recently posted a picture of sharks being sold at Giant Hypermarket. But is this really illegal or morally wrong? The sharks shown here seems to be small blacktip reef sharks, which aren’t one of the endangered ones, although populations are still declining. Maybe that’s because Malaysia caught 231,212 tonnes of sharks from 2002 to 2011, the eighth highest globally.  There are two aspects to this. The first is… Let’s get one thing straight. Shark meat is pretty much one of the worst fish meats you can eat. Why? Because it contains high levels of mercury, which cause brain damage in a variety of ways. So if you learn one thing from CILISOS today, DON’T EAT SHARK MEAT COS IT WILL MAKE YOU STOOPID.

Why so high? Cos sharks are the top of the food chain, which means they eat lots of smaller fish, digest them, and poop out the rest. Mercury, which comes from pollutants and natural sources, doesn’t get pooped out tho, so it stays within the animal – something called bio-accumulation. So, the guy at the top (JAWS) just keeps ingesting more and more mercury.

For that reason alone, GIANT should not be selling poisonous fish.

We asked Jonn Lu, globetrotter and founder of Sharksavers.org who is running a campaign within Malaysia to get celebrities and companies to pledge that they’re Finished with Fins. He said “It depends if the shark sort is a protected or vulnerable species, and it comes under an International treaty called CITES. There are no laws against shark meat per se, unless it’s a protected and vulnerable species.”

However, because the blacktip isn’t an endangered species (it’s only listed as Near Threatened on Wikipedia), it isn’t protected. In fact, according to this excellent article on The Star, only the gentle Whale Sharks are protected in Malaysia  by the Fisheries (Control of Endangered Species of Fish) Regulation 1999. Shark catching of any kind is, however, outlawed in Sabah, and carries jail time of up to three years or a RM30,000 fine, which they want to implement across the rest of Malaysia.

Anyways, we’ve spoken to GIANT and they want an official email, so we sent one to Norine M, who’s their General Manager. We’ll update this post once we get an answer.

So short answer to the question? NO, it is not illegal to catch, fin or sell sharks in Malaysia.

UPDATE: GIANT has replied, stating that sharks are being removed from their hypermarkets. They also mentioned that the sharks were caught from Sekinchan and Sungai Besar, both within Selangor, and not endangered. from some random french site

Here’s where you might be surprised. Many people think eating shark is wrong, but that’s an over generalization. Eating shark is the same as eating any other meat – it’s cruel because something dies. If you’re against eating shark, you might as well be against eating chicken. Even most of the shark in Malaysia is caught by accident while catched other smaller fish like tuna or Ikan Bawal, as shown in the picture on the right. With nets that big, you’re gonna catch some big fish.

So if it’s dying in the net already, it actually makes sense that we might as well eat it (except that it makes you STOOPID). What we’re against is Finning.

Shark fins can go for US$400 a kg, which is alot more than any fish. So if you were a poor fisherman, it would make sense to just cut the fin off, and save space on the boat for other things right? What this has contributed to, is ALOT of dead sharks, as well illustrated by this article. So who’s the bad guy here? 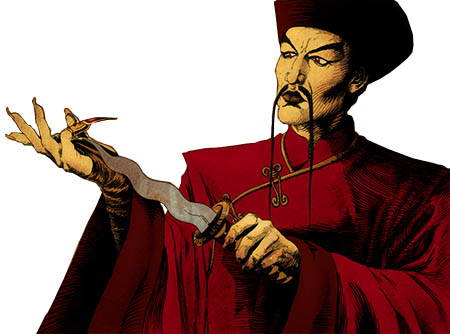 Yes. Evil Chinese peepur – who pay ridiculous amounts of money for something that tastes like tonghoon but causes the death of 100 million sharks a year.

Here’s the thing. IF we ate the whole fish, and paid those prices that GIANT is selling them for? There wouldn’t be a finning industry. So the short answer here for GIANT is… once again, No (except that it makes you Stoopid).

UPDATED opinion: Upon discourse with various readers online, I’ve changed the answer to “Kinda No“. Although selling shark meat does contribute somewhat to the population reduction (and is thus, a minor offense), this species in particular is neither endangered, nor fished as irresponsibly as say Bluefin Tuna, which is served at numerous Japanese restaurants in town and at Ben’s Independent Grocer and even a simple Cod, both of which are significantly more endangered than the blacktip (or silky) shark.

In other words, there are literally BIG-ger fish to fry.