If you’ve ever lived near a mosque or surau, you’d probably be quite familiar with their use of loudspeakers for religious activities such as calls to prayer or sermons. However, earlier this month, the DAP-led Penang state government caused a bit of an uproar when someone leaked an official Penang State Letter to stop mosques and suraus from using their external loudspeakers.

Here’s an image of the alleged letter, and you can read the rest of the details here.

In response, rumors went viral that the Red Shirt Rally guys were organizing a protest in Komtar to pressure the state government into withdrawing the ban: “What laa this Penang government thinking? Why suddenly want to make orang Islam angry? We had enough of red shirt rally already. Why raise havoc? Next thing you know people will run amok in front of Komtar!”

Calm your horses. Chillex dulu, brader. Have a break. Have a teh-tarik first. And let’s digest two very important points in the letter :

Meaning that Azan (the calling to let the people know that it’s already prayer time) and Iqamah (the calling just before mass prayer in a mosque – kinda like mini-Azan lah) would still be heard through external loudspeaker as usual. But for other activities, the masjid and suraus will have to use their internal loudspeakers so that they would only be heard by those inside the compound. 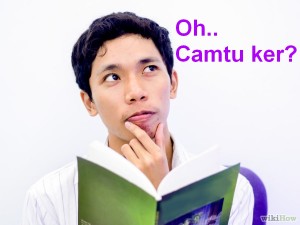 In other words, there will still be Azan in Penang!

Yup, the news that of the Azan being prohibited in Penang, just like Microsoft giving money to people, isn’t true.

It has been discussed and asserted in the Penang State Fatwa Committee meeting that there will be no compromise for the Azan itself. The prohibition is NOT for Azan and Iqamah.

So…. what exactly are they stopping?

If you live close to a mosque or surau, or you if go there regularly, you’ll know that other than mass prayer, there are a lot of other activities there as well, such as..

So, these are among the things prohibited from being played on the external loudspeaker as it doesn’t make sense to involve everyone outside the compound of masjid and surau. But internal loudspeakers, no problemo.

Why la cannot read Al-Quran loudly using external loudspeaker? It’s a good thing for masjid and surau neighbors to hear what! Can get pahala summore!

“Although the recitals of Quran and zikir are encouraged we cannot force others to listen to our prayers. There are Muslims who may choose to pray on their own at their own pace, as well as those who are ill, sleeping children or those who are not compulsory to pray such as menstruating women, non-Muslims and others.”

Activities such as Qiamullail (3.00 a.m onwards) are good for those involved, resulting in plenty of pahala (rewards in Hereafter) for Muslims, but if it uses the external loudspeaker (meaning that it is as LOUD as the Azan) can you imagine how disturbing it would be to the mosque’s neighbours?

Here are a couple comments we got from social media: 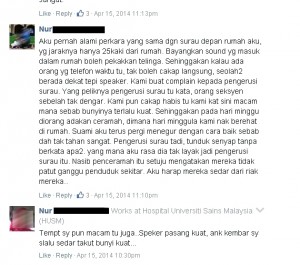 Try putting yourself in this woman’s shoes – having to endure the sound from the loudspeaker for such a long duration of time (to put it in context, Azan only lasts 3-4 minutes but a religious lecture could last 1-2 hours). She can’t even make a phone call, let alone put a baby to sleep.

I feel you, Sis. I lose count on how many times I cubit my husband for sneezing too loud when my toddlers are napping. It’s the only time we mothers could drink a cup of coffee in peace – and while the coffee is still hot.

Maybe we should also consider this beautiful excerpt by Prof Dr Mohd Tajuddin Mohd Rasdi in his article “The true spirit of Azan”:

“We must take heed of what Imam Ghazali recorded in his Ihya Ulumuddin as follows:
“One night Said Al-Musayyab heard Umar Abdul Aziz reciting aloud the Qur’an in the Mosque of the Prophet. Said ordered his son to go to the person who was praying and tell him to lower his voice in recitation. His son replied that the mosque is a public place and that they had not a single right to it and furthermore, the man who was reciting was the Governor of Medinah.
Said then called onto the reciter and said,” O you who is praying. If you desire that Allah The Most High accept your prayer, then lower your voice. If you desire that the people accept you, the people are only in need of Allah.” When Umar, the Governor of Medinah, heard this advice, he shortened his superragotary prayer and lowered his voice in recitation.”” – Prof Dr Mohd Tajuddin Mohd Rasdi, as quoted in Malaysiakini.

This must be political/racial, right? Or complaints from non-Muslims who hate Islam?

Actually…. no. Even the Prophet Muhammad S.A.W once reprimanded his sahabah who read Al Quran in a loud voice because it disturbed other people. The hadith reported by Abu Sa`id (may Allah be pleased with him) states:

So really, this isn’t a new issue – it’s been around more than 1400 years. Even in Arab-Muslim majority countries, where Rasulullah and high clerics of Islam have already discussed this. For more details, you can read Dr MAZA’s discussion of the topic here.

NAH, BACA:
Sarawak flooded? Will they get money from govt like Kelantan did?

Also, complains about the mosque and surau loudspeaker aren’t only from non-Muslims. As shown in the screenshot in the previous point, complaints come from Muslim neighbours as well.

But if you still think that this prohibition is political/racial (since some people are accusing a certain secular political party who governs Penang *coughDAPcough* for influencing the Penang State Fatwa Committee), here’s a question for you:

Which other state do you think has a similar rule regarding masjid and surau loudspeakers?

Surprising answer, right? Do you see any influence of THAT political party here?

Back in 2011, the Penang Islamic Affairs Departmentss (JHEAIPP) issued a circular instructing all mosques and surau in the state to stop the broadcasting Quran readings during the early hours of dawn, it just that this year they want to make it a regulation. Dr Juanda Jaya (Perlis’s Mufti at that time) supported the prohibition and stated that Perlis has long enforced the prohibition. “The practice of turning up the volume on the microphones before dawn goes against the Prophet’s teachings, because it disturbs those who are still asleep. Such acts of disturbing others is forbidden and is a sin”

And get this, the Perlis Fatwa Council chaired by Tuanku Raja Muda Perlis had brought up the matter as early as 2007. Wow, 8 years already!

There wasn’t a need to cancel the protest since nobody showed up. Probably because most of it was just a simple misunderstanding. Again, no one’s banning the Azan in Penang.

However some Muslims still oppose this prohibition and claim that it is against the spirit of the Federal Constitution which places Islam as the official religion. Some have also taken to conspiracy theories while others are skeptical of the implementation of the rule.

“The fatwa gives exception to the calls of prayers in the use of loudspeakers outside the mosques and surau, but it is hoped that the committees can use their discretion in deciding what should be done in implementing the ban in its real context. The literalists follow exactly what is said by the law or follow the blind letters of the law, but a wise man will see the meaning behind what was written,”

The good news for those opposing this ruling is that it’s just a proposal and there’s still a long way to go before the committee makes it a fatwa. But in the meantime, if you have a better solution, the Penang Mufti’s Department is welcoming any constructive input. Yup, you actually have a place other than social media to direct your complaints this time so why not take a shot?

“The public and non-governmental organisations can also send their views to the Penang Mufti’s Department.If their views or arguments are valid, we will invite them for discussions.” – Datuk Abdul Malik Abul Kassim, Penang State Religious Affairs, Domestic Trade and Consumer Affairs Committee chairman