This is the second part of a 2-part series. If you haven’t read Part 1, click here to read it!

Way back in April, we published part of a series of Malaysian political comics – most interestingly one featuring a character who looks like PM Najib as Superman. If you haven’t read that article, click on the link above to head up, up, and away (like our exchange rate)!

The last two comics we got for ugaiz both deal with transformation… but not of the superhero type. Rather, they’re about the economic and political transformations undertaken by the current government while subtly pushing certain messages across, if you read between the lines. If Michael Bay adapted these comics into a movie, it would probably be called Transformas: propaganda in disguise. … yea sorry that was a bad pun. But you know what else is bad? Our sources, cause here be disclaimer:

Really wan, we tried approaching several resellers who claimed to have these comics in stock, but we waited sampai janggut jadi bubur pun they were still “looking for it”.

Anyways, let’s start with a standoff between two political ideologies: Comic cover. Why is Anwar wearing his headband sideways? Photo of the flyer distributed to students. Image from wargamarhaen.

When we contacted the various sites that hosted this comic for permission and more information, the only reply came from the admin of FreeWEBcomic who tells us:

While we don’t know of any specific events where this was distributed, we found an account mentioning that pages from the comic were reprinted and distributed as flyers to students of Universiti Teknologi Mara (UiTM)’s Terengganu campus in 2012. According to the blog wargamarhaen, several busloads of UiTM students were sent to the site of PM Najib’s visit where attendees were given a comic book about his life story (*hint hint*) and the Transformasi Vs. Reformasi comic in flyer form.

Since this is presented in a something-versus-something format, we’re gonna do the same for the following examples

1. Najib and Anwar both promote the country, but differently Sorry DSAI (Fun fact: DSAI stands for Datuk Seri Anwar Ibrahim), but this comic has got you cornered on this point. In this article by the Kuala Lumpur Post, among the foreign personalities that MP Anwar has convinced to badmouth the country are his “old friend” Australian senator Nick Xenophon who criticized the state of Malaysian democracy subsequently barred from entering Malaysia, ex-US Vice President Al Gore, and convicted-of-corruption former Phillippine President/actor Joseph Estrada.

Apparently, this mud-slinging nature was passed along the family tree since his daughter Nurul Izzah was also accused by then-Home Minister Datuk Seri Hishammuddin Hussein of “affect[ing] the country’s image and integrity” in an interview with an Indonesian newspaper in 2010.

Gee guys, can you stop saying bad stuff about our freedom of speech, democracy, and government transparency please?!

During the 2014 floods on the east coast, PM Najib was hard at work (during what was supposed to be a holiday!) improving relations with US President Obama over a round of golf; keeping a strong face till he had a private moment to call back and check up on the situation back home. America remains an important trade partner with Malaysia and our two countries are a parliamentary vote away from signing a trade treaty called the Trans-Pacific Partnership. 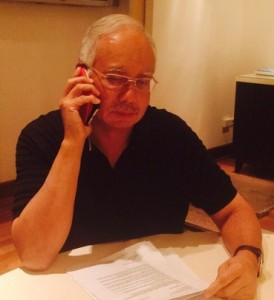 Totally candid photo of PM Najib during a private moment checking up on the Rakyat. Image from The Malaysian Insider.

And let’s not forget the smiling selfies with world leaders such as Obama, Singapore’s Lee Hsien Loong, and Indonesia’s Jokowi. It’s stuff like this that brings the investment flooding in!

2. Najib and Anwar both prove their agendas, but differently In case you were wondering, “auta” in the comic means “lying, boasting, or exaggerated”. The comic most likely references DSAI’s speech a few months before the 2013 General Elections (GE13) in which he said:

“The people are rising to demand changes. … We are the catalyst of this process. We are confident, God-willing, that we can conquer Putrajaya,” – Anwar Ibrahim, as quoted in Asian Correspondent.

Among the promises Anwar made if Pakatan Rakyat won the GE 13 elections were…… oh wait, they didn’t win.

NAH, BACA:
These 5 ex-BN leaders started their own parties. Where are they now?

The comic depicts PM Najib standing proud amidst two of Malaysia’s proudest modernization achievements. We see the Monorail/LRT system which was pushed forward by Dr. Mahathir and currently being expanded on by the Najib administration. We also see the Twin Towers, at one point the tallest buildings in the world and still the tallest twin buildings in the world, which was proposed by Dr. Mahathir (who even tweaked the design a little).

Clearly, the proof is in the puddin’ 🙂

3. Najib and Anwar both promote industries, but differently We………. don’t actually have any commentary on this but we put it up here cause we found this one quite funny thanks to the epic Peruncitan/Pembuncitan and Pemborongan/Pembohongan wordplay. Unless you don’t understand Malay, or if you share a different sense of humor from us; in which case…. sorry lor  🙁 As you can see from the details, this is by far the most well-documented of the comics. It chronicles PM Najib’s life from birth to his appointment as Prime Minister of Malaysia as well as his visions and goals for the country. It’s also a whopping 109 pages – which might explain why there aren’t full copies available online (How to scan??).

And schools, apparently. Screencapped from the LowYat forums.

It was, at one point of time, available for sale at RM 13.90 at all major bookstores and was so popular that it went through 8 reprints.

While we’re not sure if he was paid to author the comic or if it was a passion project, it’s interesting to note that the author Akmar Hisham (who is also known by his pen name Mokhles) is currently PM Najib’s press secretary. Transformasi Najib is seen as the beginning of the use of comics as a way to distribute information, and was distributed for free at BN-sponsored events.

1. PM Najib from childhood to Primeministerhood

According to the forum starter at the LowYat forum, the comic chronicles PM Najib’s life from a bright young child to adulthood. It also mentions that he used to enjoy Enid Blyton novels, particularly the Famous Five series about five friends (including a dog) who solve nefarious criminal plots and go in search of missing cash and treasures.

Speaking of treasures,  yes, that’s Datin Rosmah in the rightmost panel. Here’s a another picture: Can you spot the porky nose?

Apparently, certain parties noticed that the noses of Chinese people in the earlier versions of the comic looked like pig snouts – a feature which wasn’t found on non-Chinese characters. It has been claimed that this was done on purpose as “part of the propaganda to belittle some of the minority races in Malaysia as ugly and foreign”.

The author has not responded to media queries on the issue (as much far as we know anyway) but in any case, this has been fixed in later editions of the book. So if you haven’t read the first part, you might find yourself wondering…

While some of us might be getting a good laugh over them, there might also be those out there reading this article (or who got copies of the books) who’ll find the points confirming any existing ideas or even be convinced that these points are true. This may in turn create feelings of disharmony or, even worse, instigate people to act on these feelings, which sounds like a cause for a sedition investigation to us.

Here’s a rundown of some of the point and features presented over the four comics:

Not all of them may be sedition fodder (Here’s our quick sedition guide), we’re pretty sure there’s a defamation lawsuit at the very least so it’s probably a good thing that most of them are anonymously published.

You might be interested to know that the record for most sedition charges (nine!) is against a local cartoonist named Zunar who also draws comics about PM Najib……….. in a much less flattering manner.