You’ve heard about the cross protest in Taman Medan on 19 April, which resulted in the church, Community of Praise Petaling Jaya, taking down their cross. It sparked off a debate between IGP Khalid and Home Minister Zahid Hamidi are on whether or not it’s seditious.

Netizens are saying it’s seditious and calling for action to be taken against the 50 protesters. But the Lawyers for Liberty guys are saying…..it’s not?!? HUH?? Click here to find out why.

The Cross was on a Church building, where else should it be?Why have we become so intolerant, so sensitive?Be fair and rational #Malaysiaku

Even our PM said the protest might be illegal:

Then MBPJ came into the picture classifying the church as unlicensed. They said the church hasn’t submitted an application to operate as a place of worship and had no permit to put up a cross on its building.

So if you wanna build a place of worship, what are the guidelines?

Image from Malaysiakini (left) and The Malaysian Insider (right).

We found this on the National Evangelical Christian Fellowship (NECF) Malaysia’s FAQ page:

1. Does a church need to be registered with Government in order to exist?

It’s not necessary for a church to register with the Government based on Article 11(3) of the Federal Constitution. There are no conditions in the Constitution that requires a church to form a legal association before they can be regarded as lawful.

2. Are churches allowed to own land?

Yes, they are. As long as they are incorporated as private companies limited by guarantee or have set up a trust.

So is there actually a law that governs people worshipping in a building?

MBPJ’s Public Relations officer Zainun Zakaria pointed out Act 133 Section 70(12), but when we looked it up, the explanation wasn’t very comprehensive.

OK, so basically this Act 133 is saying, if you build a church, you need to declare it. Let’s say you open a hairdresser shop, but at night you use it as a nightclub. Then if your neighbours complain about the nightclub, you’ll have to close your hairdressing shop. Something like that…

That’s confusing! So we called someone who would know about these things, the Council of Churches General Secretary Reverend Dr. Hermen Shastri! We started off by asking him if he knew how often church applications get dragged on or rejected.

“No. Our Constitution states there is freedom of religion. Every religious community just regulates themselves. There are no laws to reject your right to worship. Let’s say you rent a place tomorrow and bring 20 people along, you can.” – Dr. Hermen HUH!? Then why did MBPJ say something else? But ok, if we reviewed MBPJ’s public relations officer Zainun Zakaria’s exact words: “Shoplots that are converted into places of worship or meditation centres must comply to Act 133 Section 70(12) and a written application with the activities described must be submitted for approval. We need these compliance as to ensure safety of the people using the building.”

See the bolded words? Sounds very vanilla right? Maybe that’s coz MBPJ didn’t say people cannot worship. Does it sound more like they’re making sure people won’t jeopardise their own safety in the building? Dr. Hermen concurs that people can worship anywhere they want. As long as you’ve got no complaining neighbours, they authorities won’t react. So if people don’t complain about the ‘nightclub’, the hairdressing shop will be fine.

At the end of the day, Dr. Hermen says the town council has the final say when it comes to buildings. Meaning if they only allow you to use it as a hairdressing shop, not a nightclub, then you can’t open a nightclub.

But suddenly on 22 April, State Exco Elizabeth Wong told the church they could put the cross back up because places of worship CAN operate in commercial units without permits. Since 2008, commercial property and shop lots can be used if the Committee on Non-Islam Affairs is notified.

Do places of worship in Malaysia face a lot of problems? We looked for other instances where places of worship were demolished. Many Hindu temples especially have been demolished, some of them very old.

“A house we can build again. A temple is about more than money. We are Indians, and this is our faith.” – Krishnan Ponnusamy, market trader, CS Monitor

And despite all the marches by Hindraf, town councils are still sending their bulldozers. Just recently, Hindraf called for an urgent meeting with Selangor MB Azmin Ali because they found out that 100 temples were reportedly earmarked for demolition. And out of nowhere, there’s been a hoax circulating around, about a fake police statement issued for the demolition of Batu Caves. Here it is: Screenshot of the fake statement. Image from The Malaysian Insider.

It’s not just Hindu temples. Christian churches and Buddhist temples also face the same danger. Do mosques ever get demolished? We only managed to find 1 case on a resort surau in Johor. If you guys know of any others, let us know.

But if we’re talking about numbers, it seems like Hindu temples are facing the brunt of demolition. According to Hindraf lawyer P. Uthayakumar, “Every 3 weeks, 1 Hindu temple was being demolished by government authorities or relocated next to IWK sewerage ponds.” We can’t find exact numbers for church, gurdwara and Buddhist temple demolition, but if you guys have the stats to share, we can put it in the article.

“It’s not like in the US. Over there anybody can open a place of worship – anything can. Even sects can open up a place because they have freedom of religion. Over here, the different religions cannot agree…so what to do?” – Dr. Hermen.

If there’s no law, then what can we do? 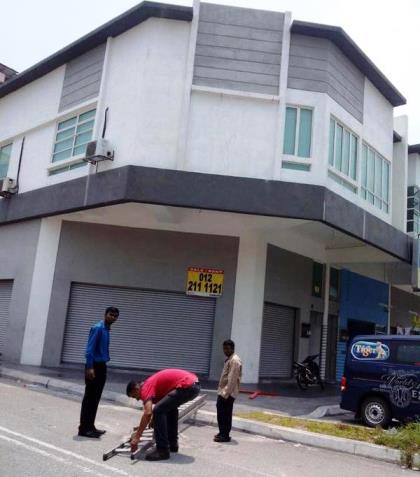 The cross being removed. Image from mca.org.my

To see a protest like this happening in multi-racial Malaysia is disheartening. We believe in the Constitutional guarantee to our freedom of religion. Yet, why are there so many challenges to live together with respect?

At the same time, we see Malaysians supporting each other. Like when The Star journalist Nicholas Cheng was looked out for by a Muslim fellow journalist on-site at the protest. We also found an article on Malaysiakini written by Hafidz Baharom, The Malaysian Insider columnist. He has an interesting viewpoint. Even an ulama said:

If the demolitions are so skewed and the fact that there is no law, what can Malaysians do? If we want something to be done, we need to share this around so people are aware. So when the extremists are crying out, the moderates need to cry out even louder.

Share this article:
NAH, BACA:
The story of the 41 y/o Kelantanese guy and his child wife just had a plot twist